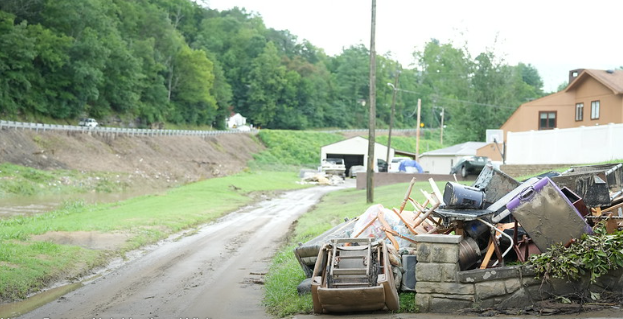 The National Weather Service warned that there could be more locally heavy rainfall in already flooded eastern Kentucky on Thursday and Friday with the possibility of strong winds.

Kentucky Gov. Andy Beshear looks are the flood damage to home in eastern Kentucky in a tour earlier this week.

The National Weather Service warned that there could be more locally heavy rainfall in already flooded eastern Kentucky on Thursday and Friday with the possibility of strong winds.

Kentucky Gov. Andy Beshear looks are the flood damage to home in eastern Kentucky in a tour earlier this week.

FRANKFORT — Gov. Andy Beshear said Thursday during his update on the flooding in eastern Kentucky that Owsley County has been added to the list of impacted areas approved for Individual Assistance by the Federal Emergency Management Agency.

Renters and homeowners in these counties who were affected by the severe storms, flooding and mudslides that began July 26 may apply for individual disaster assistance by going to one of the in-person mobile registration centers, applying online at DisasterAssistance.gov or by calling 800-621-FEMA (3362).

“Let me address something — there are a lot of rumors out there about who qualifies for FEMA or who can apply,” said Beshear as he gave a rundown of the ongoing relief effort. “Everyone who has been significantly impacted by the flooding in the eight counties approved for Individual Assistance needs to apply for FEMA. It’s a requirement for our travel trailers and it will be a requirement for other programs. Please apply.”

Two FEMA Mobile Registration Centers have been added in Floyd and Pike counties. There are now a total of nine mobile registration centers. FEMA representatives will be at the centers. For additional information go to governor.ky.gov/floodresources.

Beshear said Thursday the number of confirmed fatalities in the flooding remains at 37.

Kentucky State Police reports there are two missing persons still being searched for in relation to the flooding. This number reflects reports made only to KSP.

The National Weather Service said temperatures were to reach 95 to 100 degrees Thursday in Eastern Kentucky. Slow-moving thunderstorms could lead to local heavy rainfall and high water Thursday and Friday, with the possibility of strong to damaging wind gusts.

There are a total of eleven cooling stations across Breathitt, Floyd, Johnson, Letcher, Perry, Pike and Wolfe counties. For details, go to governor.ky.gov/floodresources.

As of Thursday, there were 76 occupants in shelters and 293 people are being housed at Kentucky State Parks.

Sixty-eight travel trailers had been delivered for housing, including:

• 25 at Mine Made Campground in Knott County

Kentucky National Guard had 389 members supporting the flood efforts in Eastern Kentucky. They had distributed 11,682 cases of water, 118 pallets of food and 332 meals.

The Kentucky Transportation Cabinet has awarded a contract for removal and disposal of debris on state and county rights-of-way. Information regarding debris drop-off locations will soon be added to governor.ky.gov/floodresources.

The Team Eastern Kentucky Flood Relief Fund had received 24,100 donations reaching $3,426,962.96. The first payments are going out, the update said.

Power outages were reported down 3,044 from 5,068 reported Wednesday.

Available drinking water remains a challenge although the 13,590 service connections without water Thursday were down from 18,002 reported Wednesday.

Service connections under boil water advisory were at 41,004 , down from 45,656 reported Wednesday.

Two wastewater plants were experiencing bypasses, down from three reported yesterday and 13 systems are experiencing discharges from portions of their collection systems.

Donate to the Team Eastern Kentucky Flood Relief Fund at teamekyfloodrelieffund.ky.gov. Resources for flood victims can be found at governor.ky.gov/flood-resources

A fraudulent text message impersonating an official KYTC message was reportedly sent to several people this week. The sender appears to target flood victims by including a link to submit information related to the waiver of card and registration replacement fees. The text message is not from KYTC, and recipients are warned not to click the link. While the cabinet may send text messages about Driver Licensing Regional offices, it will never solicit personal information via text. Victims who have submitted any personal information are advised to go to the Kentucky Office of the Attorney General website, ag.ky.gov, to follow their guidance concerning potential identity theft.