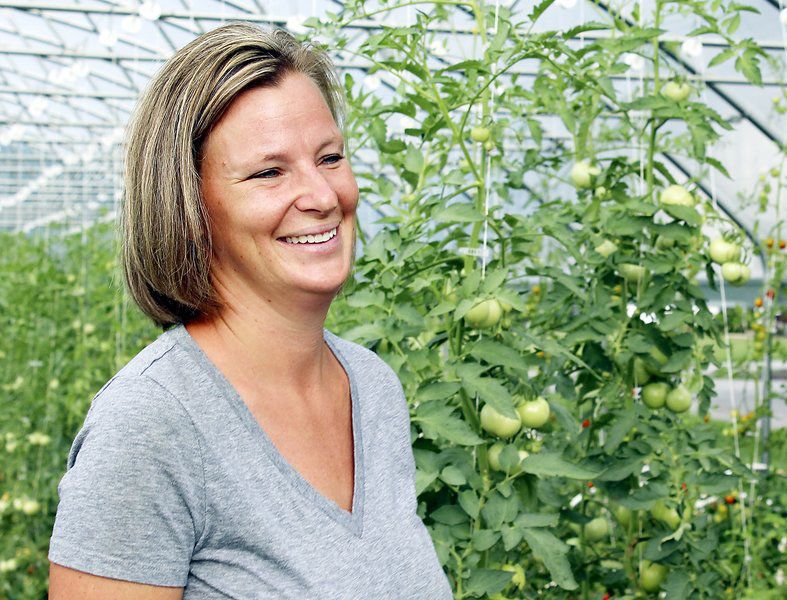 When Air Force veteran Sara Creech lost her husband to colon cancer in 2011, she didn’t know what to do.

“I was totally paralyzed at that point,” Creech said. “It was kind of like, 'I have no idea what I’m going to do with my life. I don’t know how to move forward.'”

The couple had dreamed of moving to the country, starting a farm and living the simple life. After he died, that dream spurred Creech forward.

She bought land in Hendricks County and immediately set to work.

“I absolutely love it,” she said, her eyes sparkling. “It’s something that makes me really excited.”

Creech's story illustrates a trend in the agriculture industry. In Indiana, women make up 28 percent of all farmers. Nationwide, the number of farms operated solely by women has nearly tripled in the past 30 years.

The United States Department of Agriculture defines “women-operated farms” as those where a woman makes the decisions and is responsible for most of the tasks.

“It’s really an honor, but it gets discouraging sometimes because it’s a ton of work,” Creech said. “Being a woman is an extra difficulty on top of that.”

She remembers being treated like a child when she bought her first tractor.

“It was like they were patting me on the head, saying, ‘We’ll get you a little tractor for your little garden,’” she said. “Every time I told them what I wanted, they would say, ‘Oh, you don’t need something that big, you don’t need commercial.’”

It’s taken years for the men in her community to take her seriously, Creech said. But now they see what she's doing.

Most of women's gains in agriculture have come in the past two decades, said Marcos Fernandez, associate dean and director of academic programs at Purdue.

“It’s a field that maybe 20 years ago was seen as traditional,” Fernandez said. “But we saw a shift about five years ago where the women started outnumbering the men.”

Last year, 62 percent of the Purdue School of Agriculture’s students were women.

“You’re seeing a number of them feeling like they want to make a difference,” Fernandez said. “It’s fantastic.”

Maria Mauer of Greensburg is making that difference. With no previous experience in agriculture, the 46-year-old has managed a large-scale pig farm for the past 13 years.

“In 2016 I was a finalist for America’s pig farmer of the year. That was a big deal because I was the only woman finalist,” Mauer said. “It’s hard for us to get to that level. It’s still very much a man’s world, but there’s more and more of us that are taking on these roles and showing more of a leadership position.”

Mauer hopes she can be a role model to her three daughters and son. She wants them to see that women can do everything men can do.

“If women see other women in leadership roles it gives them confidence,” she said. “It’s definitely a challenge to be a woman in this field – but in a good way. We just have to keep chipping away at the block.”

“You see all the farmers and all the guys driving their trucks and think, where are the women around here? You never see them,” she explained. “It’s kind of this unspoken thing where the women have their gardens in the back of the house and take care of the kids, and the men do the farming.”

As a female leader in a male-dominated industry, Creech wants to encourage agricultural women to step out of the shadows.

“Yeah, people are going to look at you if you’re the first woman in your area doing something different. They’re going to be watching you and talking about you,” she said. “Each one of us has something to bring to the table. But if you don’t say it out loud and you don’t act on it, then nothing is going to change.”

Katie Stancombe can be reached at Katie.Stancombe@indianamediagroup.com or 765-648-4258.