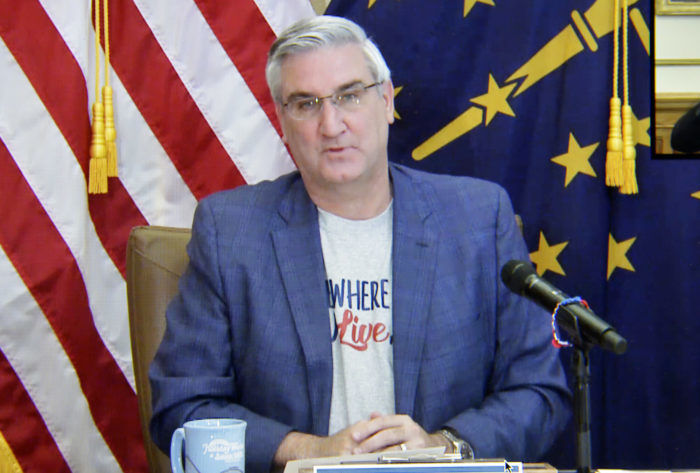 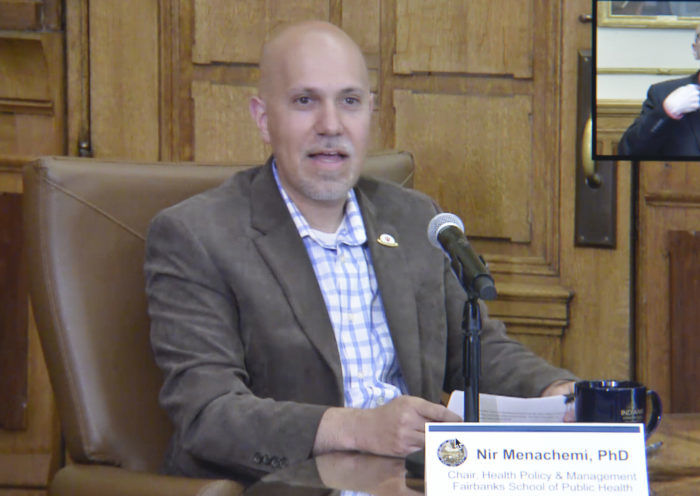 Nir Menachemi of the Fairbanks School of Public Health described the second round of COVID-19 testing that found fewer people had active COVID-19 infections but more had antibodies for the virus.

Nir Menachemi of the Fairbanks School of Public Health described the second round of COVID-19 testing that found fewer people had active COVID-19 infections but more had antibodies for the virus.

INDIANAPOLIS — As the cost of the COVID-19 pandemic continues to climb and affect nearly every part of Indiana’s economy, state leaders have decided to protect K-12 school funding from the cuts other agencies are experiencing.

Overall, the state revenues are expected to be nearly $2 billion short of what was expected by the end of the fiscal year on June 30, Cris Johnston, director of the office of management and budget, said Wednesday at Gov. Eric Holcomb’s virtual news briefing.

But, protecting school funding was a priority as districts around the state prepare to reopen. K-12 schools will receive another $183 million in addition to $192 million they will get from the Coronavirus Aid, Relief, and Economic Security Act.

“It’s totally been a team effort, everyone coming together to make sure that not only do we think students could but should be back in a stable and safe learning environment to receive instruction,” Holcomb said shortly after the state budget committee met and approved the plan to spare K-12 schools from budget cuts.

“That’s what’s, quite honestly, been encouraging to see how this has all unfolded.”

Higher education, however, won’t be spared. The state’s universities and colleges will be cut 7% or $103 million and most other state agencies have been directed to slash their budgets by 15%.

As for K-12 schools, Johnston said the state leaders did not want to limit resources they have to prepare and execute a productive and safe learning environment.

“The pandemic disrupted the academic pursuits of over one million students in the state of Indiana,” Johnston said. “Schools play a central role to the character and strength of all of our communities. And the safe opening is critical to each community’s success.”

Superintendent of Public Instruction Dr. Jennifer McCormick released a statement shortly after Wednesday’s briefing saying how glad she is about the decision to protect K-12 funding and not penalize schools that teach students in a virtual environment.

“Schools will have one less stressor as they continue to educate our students during this unprecedented time,” McCormick said.

As educators prepare for the return to the classroom this fall, COVID-19 cases continue to rise, though not as quickly as they did in the earlier stages of the pandemic.

The state health department reported Wednesday that there were 41,013 confirmed cases of the highly contagious virus, an increase of 264, and 24 additional deaths for a total of 2,289. The number doesn’t include the 186 people believed to have died from the disease but weren’t tested.

But the second phase of a study of COVID-19 conducted by the Fairbanks School of Public Health showed that the rate of infection from the disease is on the decline. Researchers from Fairbanks shared the results at Holcomb’s Wednesday briefing.

More than 3,600 Hoosiers were tested as part of a random study to show the spread of the disease. While the results showed that fewer people tested positive for the virus than a month ago in the first phase, more people had antibodies for COVID-19, indicating an earlier infection.

Nir Menachemi, health policy and management chairman of the Fairbanks School, said the results are evidence that the spread of the virus is slowing in Indiana.

The third phase of the study will take place in the fall, with Phase Four next spring.

Hope Shrum is a reporter for TheStatehouseFile.com, a news website powered by Franklin College journalism students.