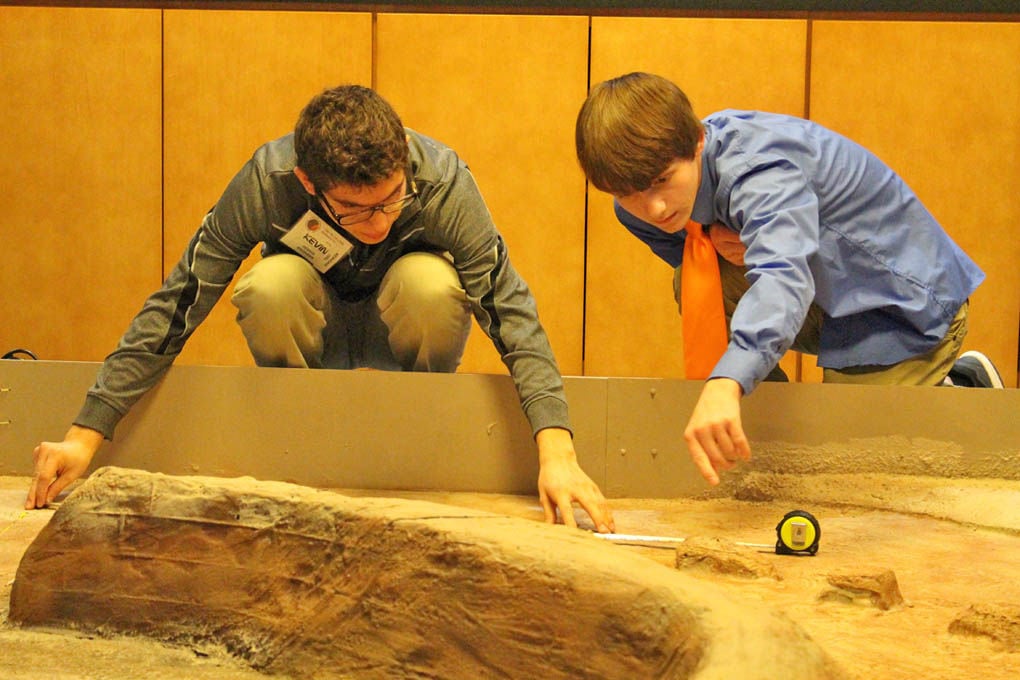 Kevin Rodriguez, 16, and Dustin Burdick, 16, measure a built Mars surface to calculate how to navigate their Lego robot Mars rover at Purdue Polytechnic Institute Friday. The project was a part of the school's STEM outreach program. 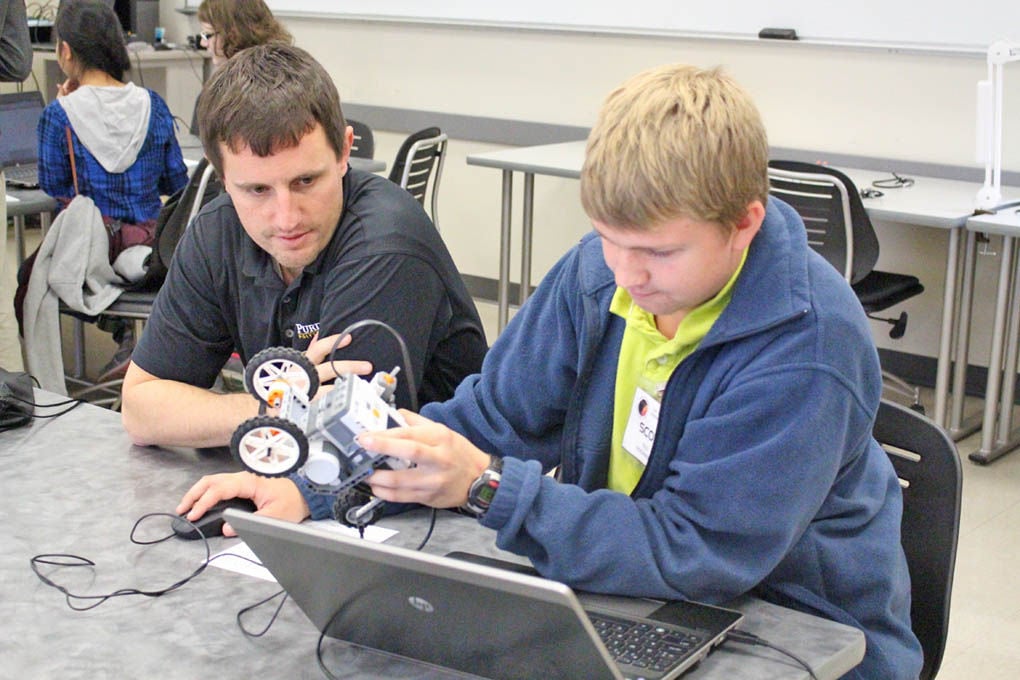 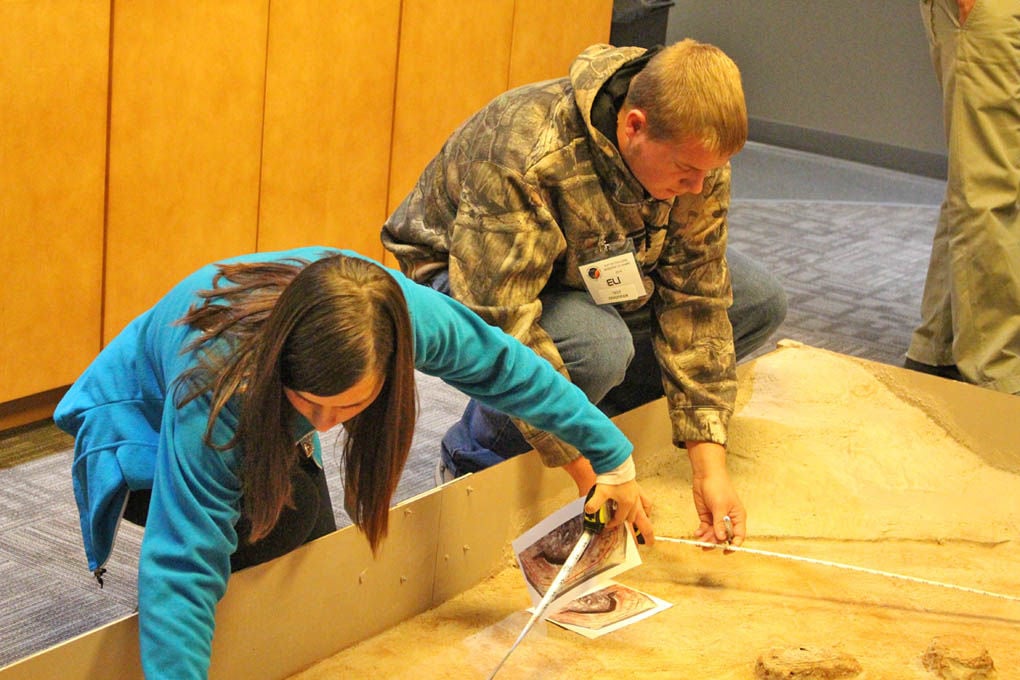 Kevin Rodriguez, 16, and Dustin Burdick, 16, measure a built Mars surface to calculate how to navigate their Lego robot Mars rover at Purdue Polytechnic Institute Friday. The project was a part of the school's STEM outreach program.

NEW ALBANY — Sixteen-year-old Meghan Sturgeon already has a handle on what she wants to be when she grows up: an engineer.

Although her high school doesn't offer much in the way of engineering exposure outside of some math and science classes that may be required for it, she got the opportunity —along with 44 other students from across Southern Indiana and parts of Kentucky — to get an up-close look at what engineering can be about Friday at Purdue Polytechnic Institute in New Albany.

“Purdue: Mission to Mars” was a daylong event which was part of the school's K-12 STEM (Science, Technology, Engineering and Math) outreach program. The students were grouped according to complementary skills and tasked with using several of the disciplines to get Lego robots, in the style of Martian rovers, to navigate the surface of Mars, built by staff, faculty and students of the school.

“We don’t have anything like this at my school,” Sturgeon said. “Like no engineering program at all. We're based around other ideas like police work and stuff so we have no engineering.”

Although Sturgeon said she is hoping to become a biomedical engineer, she was really excited about getting to go to this workshop to see what it was like.

“I was like 'This is a great idea,'” she said. “A great opportunity for me to see if I actually enjoy it.”

The students in each group used mathematical, technical, mechanical and programming skills to get the rovers going. They would test it on the Martian surface, then go back to the classroom to problem-solve and make needed adjustments. They were divided among three classrooms and each group had a Purdue student as a mentor.

Rustin Webster, visiting assistant professor at Purdue, was leading on of the three classrooms of students. He said the day was turning out well and that they students seemed to be immersed in the project.

“I think it's good. I'm having fun,” he said. “This is what Purdue is about. We do a lot of projects like this, at a different level obviously with college kids, but the handwork, the teamwork, the students seem to be working well with each other. They're not passive learners—they're definitely active learners right now which is a big part of Purdue.”

Andrew Takami, director at Purdue Polytechnic Institute, said the program was very important for introducing students to STEM fields and exposing them to educational and career options that are available in the area. Friday's workshop was the second of four at Purdue Polytechnic funded by the Duke Energy Foundation.

“'Purdue: Mission to Mars' is intended to show a student how all the disciplines, all seven that we have here, four of the main ones of course, actually correlate,” Takami said. “And this whole simulation I think is intended to bring about how a student in the real world can use our degrees, the disciplines that they learn from Purdue university and take it to the moon, take it Mars in this case.”

Dustin Burdick, a 16-year-old Corydon High School student, said he learned about the program through the Charles Allen Prosser School of Technology. He said the things he worked on during the workshop were different than the work he's done at Corydon.

“It's pretty cool,” Burdick said. “It's pretty much a big project instead of a lot of computer work.”

He said the simulation was interesting and he said doing the real-life work is definitely something he could see himself doing.

“It would be cool to design and make stuff on Mars,” he said.

The outreach program blends with a new initiative the school is piloting. The plan is to try to draw more different types of students to STEM fields than have traditionally been part of them and foster more interactive learning than the “sage on the stage” model of education.

“The idea is that we want to basically harness the way that people naturally learn,” Matthew J. Turner, assistant professor of ECET at Purdue Polytechnic, said. “If you look at children, the way that they learn best is through experience, getting their hands dirty, playing with other kids. It turns out that that is proven to be scientifically true not just for children but for us adults as well. And unfortunately, in most engineering educational environments, that's not how learning is achieved.”

Turner said although there are pockets of areas where this learning can take place but it's not been fully integrated into any school's major programming. What they're trying to do at Purdue, he said, is change the school's DNA from “sage on the stage” to experiential, evidence-based, hands-on learning.

“We're Purdue University,” he said. “We're one of the top engineering and technology programs in the world. We don’t want to change what we're teaching but what we want to do is just change how we teach it.”

He said it's also necessary to attract a variety of individuals to the programs to boost the creativity and problem-solving.

“In the modern engineering economy, all the old problems and the old ways are solved, we need new dynamic creative thinkers who have these engineering skills,” he said. “So how to we get them to come to our programs and how do we educate them when their brains aren’t wired the same way that traditional engineer brains are? That is, I think, really the great thing about the Polytechnic initiative.”

Takami said it's important for students to get involved in STEM fields as things progress further into a society that increasingly demands the skills involved.

“We want all young people to think of STEM careers, whether they come to Purdue — we hope they do — or whether they go elsewhere,” Takami said. “It's important because this is where we're going in the country. You really cant leave STEM behind.”