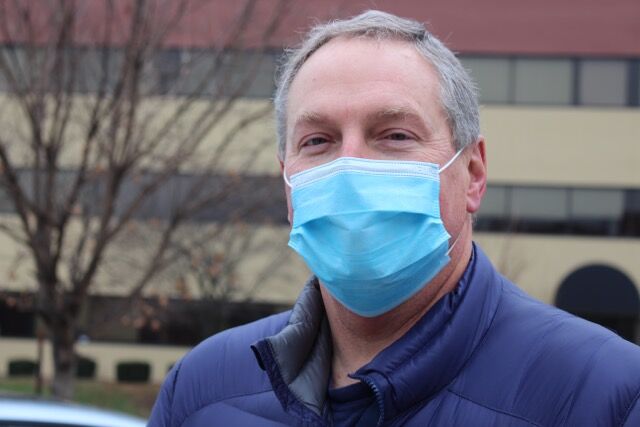 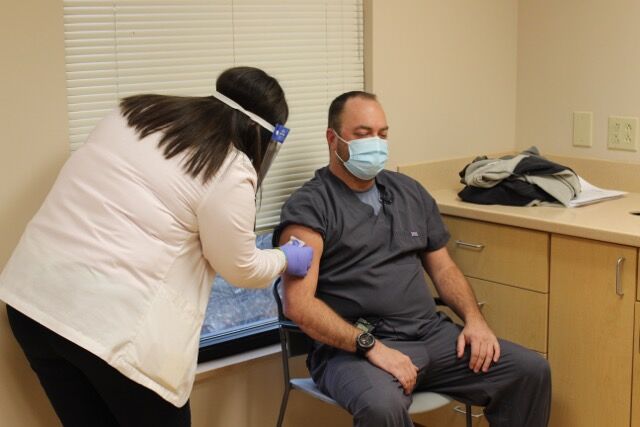 Dr. Eric Yazel, Clark County health officer and Clark Memorial Health ER physician, was among the first 10 people to be vaccinated against COVID-19 after the Pfizer vaccine arrived in the county Dec. 14. On Monday, he received his second shot of the two required for Pfizer.

Dr. Eric Yazel, Clark County health officer and Clark Memorial Health ER physician, was among the first 10 people to be vaccinated against COVID-19 after the Pfizer vaccine arrived in the county Dec. 14. On Monday, he received his second shot of the two required for Pfizer.

SOUTHERN INDIANA — Roughly 8,500 people — mainly frontline health-care workers — have been vaccinated for COVID-19 at two Southern Indiana hospitals since the rollout began three weeks ago. Health officials say the next phases will become clearer through state guidance and as more of the vaccines become available.

Clark County Health Officer Dr. Eric Yazel estimated that by the end of Tuesday, there would be about 5,000 vaccinations done at Clark Memorial Health since it began immunizations Dec. 14. In Floyd County, Health Officer Dr. Tom Harris expected about 3,500 by the end of the day at Baptist Health Floyd, which began giving the initial shots Dec. 17.

The two sites, which are also vaccinating the health-care workers in four surrounding counties, are still on Tier 1A of the vaccination schedule, which under federal guidelines, started with the most at-risk healthcare workers but has since opened up to other health professionals such as those in doctors’ offices and at schools.

While Clark Memorial has agreed to a 16-week commitment to be the site for the vaccine, the Clark County Health Department also expects to be up and running at a pre-selected site in Clarksville, possibly as early as next week if it gets the go-ahead from state officials.

That will mean they’re still initially vaccinating Tier 1A patients, but will also later be the site for the next tiers, which will likely first include older residents followed by essential workers and people with underlying health conditions and then the general public.

Yazel said the health department is ready to mobilize for whatever direction it gets from the state in the coming days and weeks, and for however much vaccine it’s allotted and when.

“We’re ready on a moment’s notice,” he said. “We’ve just kind of adopted the attitude of...if it’s two hours from now or two months from now or if it’s 200 or 20,000 doses, we’re flexible and ready to get up and running.

“We’ll make sure we get it out there as quickly as possible.”

In Floyd County, Harris said he and his team are also ready to soon transition immunizations from the hospital to a health department site, and that with some things still up in the air at the state level — including exactly who will be in the Tier 1B group — it’s hard to pinpoint exactly when particular groups will be eligible.

Harris said if the county were to be assured to continue to receive as much of the vaccines as they have the capacity to vaccinate, he believes it could reach minimum herd immunity of roughly half the Floyd County population in about 100 days.

But, “it makes us hard to schedule if we don’t know what the supply push is going to be,” he said. “We’ve got to get a consistent supply of the vaccine to vaccinate.”

Both county health departments will inform the public as new groups are opened up to receive the vaccine. As of now, mainly health-care workers have been notified through their employers and given a link to sign up through the state scheduling site.

Both hospitals, and other sites across the U.S., began using the Pfizer/BioNTech vaccine the week after the U.S. Food and Drug Administration gave the green light for its Emergency Use Authorization in mid-December. This was followed by the Moderna vaccine, which received its emergency use soon after Pfizer.

The vaccines have very similar effectiveness rates of around 95% after the second dose — a second Pfizer shot must be given at least 21 days after the first; a second Moderna shot at least 28 days after.

Yazel, who received his first Pfizer shot Dec. 14, reported no symptoms after that first dose other than a little pain where he’d received the shot. After his second shot Monday, he reported a little bit more of an immune response — a mild headache and some aches — but ones that he said are not major and show that the vaccine works.

“It’s not uncomfortable,” he said. “I don’t feel ill, but I do have a little bit of achy body and mild headache...certainly nothing that’s a deterrent.

“That’s a positive thing not a negative. That means that the shot is probably working.”

Harris, who was the first person to get the initial dose in Floyd County Dec. 17, reported no notable side effects with the first dose and is scheduled for his second later this week.

Clark County could likely reach the 10,000 positive case mark before the end of the week, with new cases at or near 100 over recent days. The county had 8,982 cases as of Tuesday reporting by the Indiana State Department of Health, 110 of them new.

Clark County’s record for new cases was reported on Dec. 31 with 165.

Clark County’s seven-day positivity rate for unique individuals soared to 32.6% as of Tuesday, following 28% on Monday. Floyd’s was 27.5% and the state’s 27%.

Yazel said the higher case counts are likely a direct reflection of winter holidays during which family and friends may have gathered.

“[We are] seeing that difficult trio of Thanksgiving, Christmas to New Year’s back-to-back-to-back,” Yazel said, adding that “we’re 11 days out from Christmas, and I think until we’re two weeks out from New Year’s, we’re probably going to see some ugly numbers.”

Floyd County showed a 2% decline in overall positivity from late last week to early this week, down to 19.5% based on the health department’s own metric. Harris said he believed last week’s spike reflected that more than 300 fewer people than usual being tested Christmas week, and those who were tended to be more likely to be sick.

Statewide, 3,477 additional Hoosiers have been diagnosed with COVID-19 through testing at state and private laboratories, the state department of health reported. That brings to 533,083 the number of Indiana residents now known to have had the novel coronavirus after corrections to the previous day’s dashboard.

The Department of Health also reported Tuesday that Indiana hospitals had 2,907 coronavirus patients as of Monday, 71 more than Sunday and the most since Dec. 29. The COVID-19 hospitalizations have declined about 16% since peaking Nov. 30 but remain more than three times higher than in September.

Of those being treated, 591 people are in intensive care, according to the state health department’s online dashboard.

A total of 8,292 Hoosiers are confirmed to have died from COVID-19, an increase of 142 from the previous day. Another 371 probable deaths have been reported based on clinical diagnoses in patients for whom no positive test is on record.

To find testing sites around the state, go to www.coronavirus.in.gov and click on the COVID-19 testing information link.