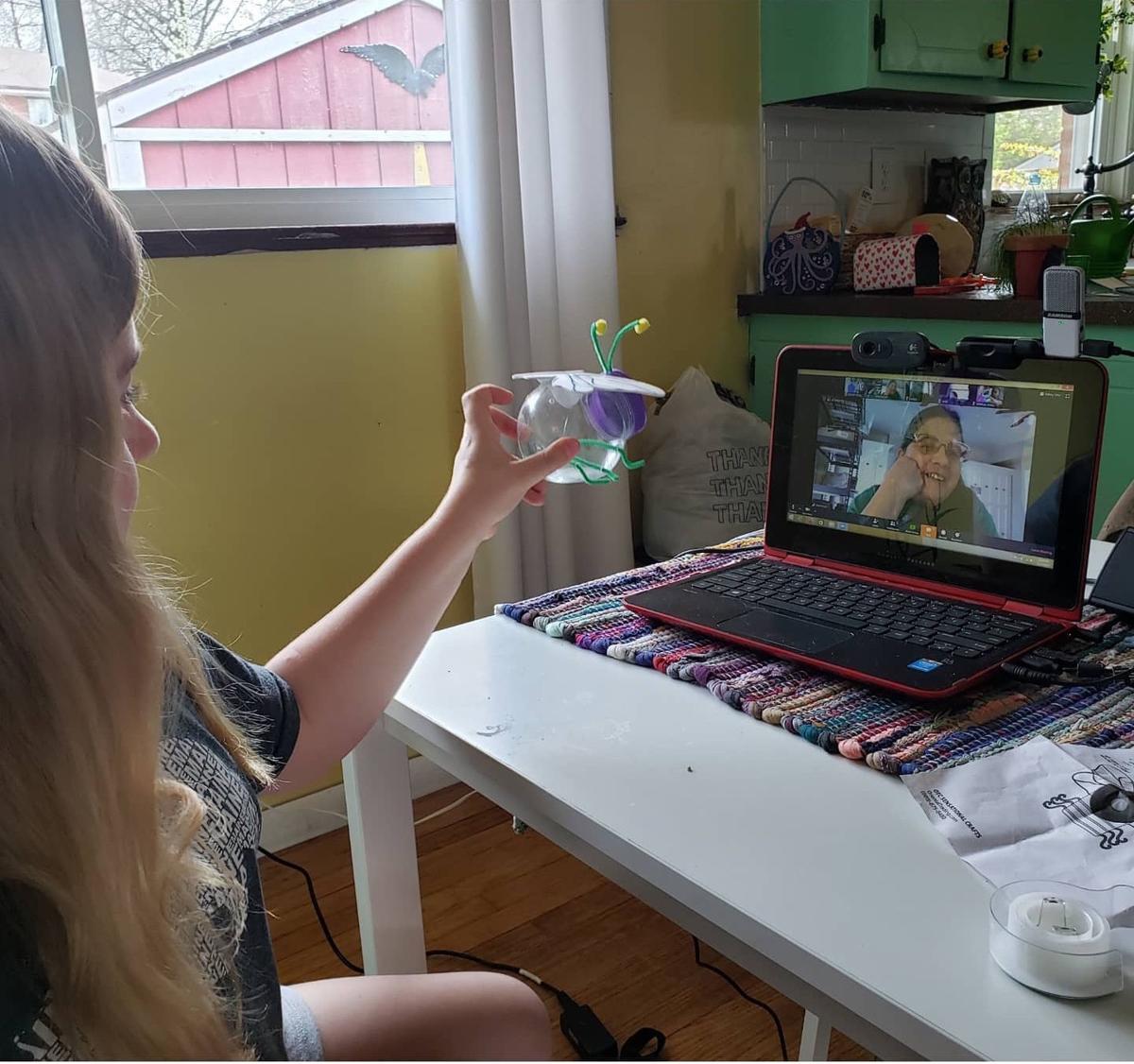 Olivia Klingman, 8, shows off her lightning bug jar during a Let Us Learn arts & craft lesson over Zoom. The nonprofit is now providing educational programming through virtual live events and video. 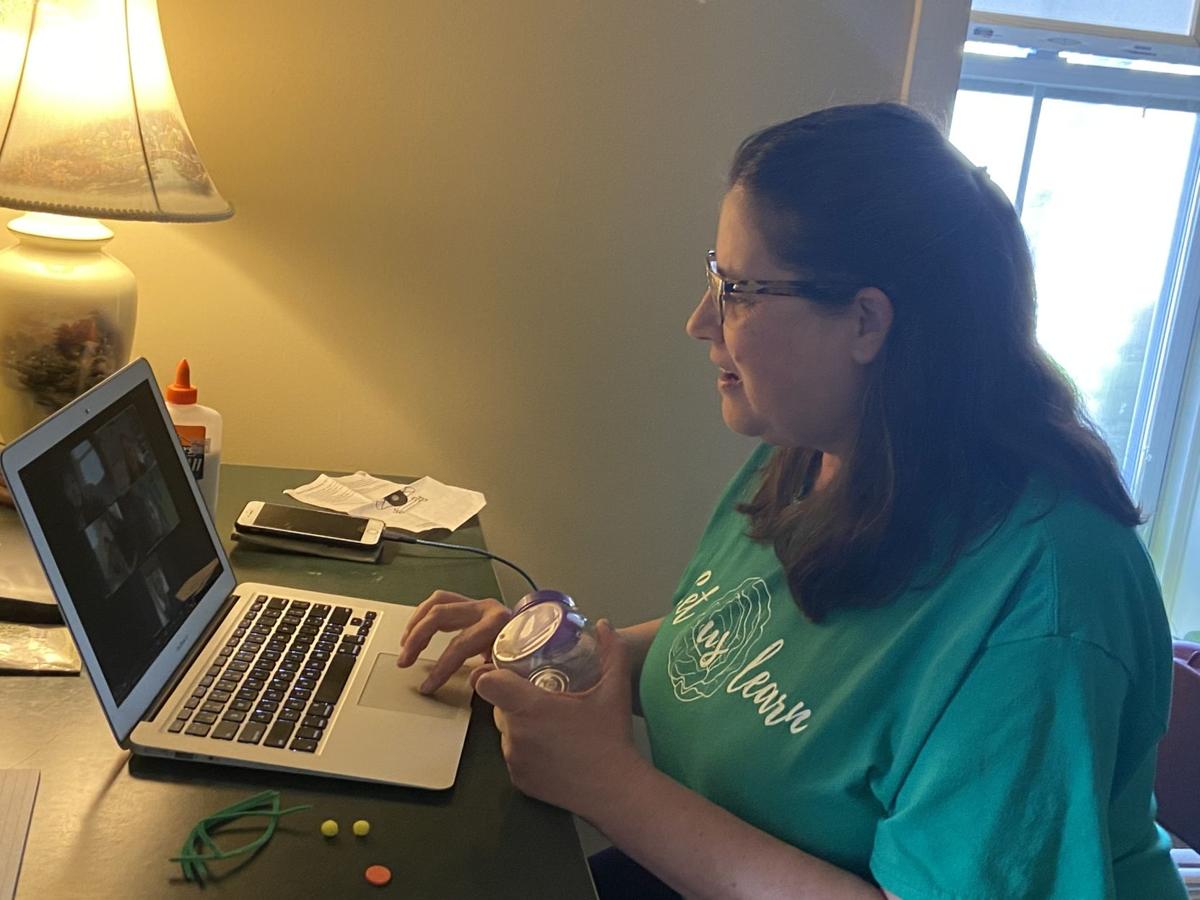 Let Us Learn Executive Director Gina Brown teaches families how to make a lightning bug jar during an arts & craft lesson on Zoom. The nonprofit is switching to virtual lessons due to the coronavirus pandemic. 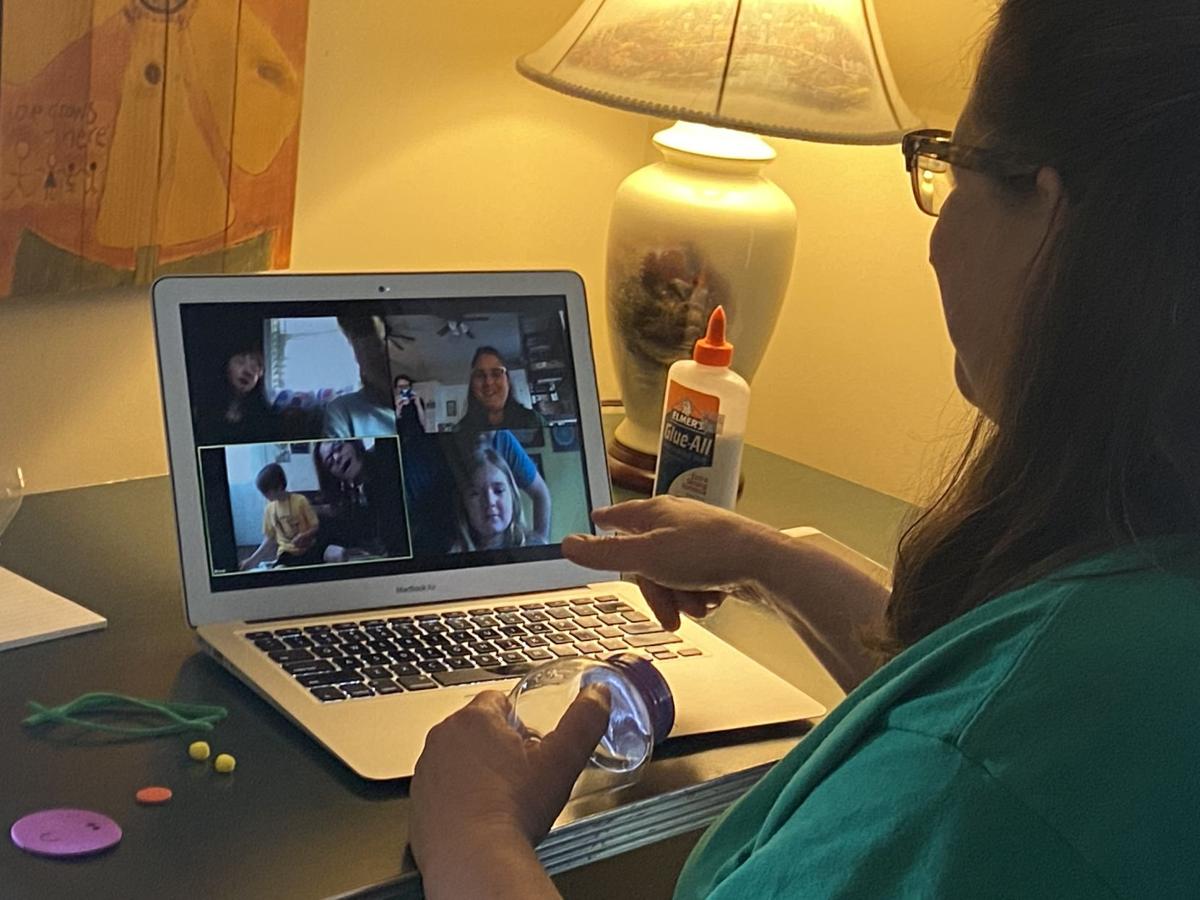 Gina Brown of Let Us Learn talks to families over Zoom as she conducts a virtual arts & crafts lesson for kids. The nonprofit is transitioning to virtual programs due to the coronavirus pandemic.

Olivia Klingman, 8, shows off her lightning bug jar during a Let Us Learn arts & craft lesson over Zoom. The nonprofit is now providing educational programming through virtual live events and video.

Let Us Learn Executive Director Gina Brown teaches families how to make a lightning bug jar during an arts & craft lesson on Zoom. The nonprofit is switching to virtual lessons due to the coronavirus pandemic.

Gina Brown of Let Us Learn talks to families over Zoom as she conducts a virtual arts & crafts lesson for kids. The nonprofit is transitioning to virtual programs due to the coronavirus pandemic.

NEW ALBANY — The New Albany-based nonprofit Let Us Learn Inc. was building momentum, and then the coronavirus pandemic hit, halting its in-person programming.

But that’s not stopping the organization from offering weekly lessons to local children.

Let Us Learn, a volunteer-run nonprofit focused on teaching kids to grow their own food and eat nutritious meals, has introduced virtual programming to adapt to closures caused by the coronavirus pandemic. The nonprofit has partnered with local schools, including Fairmont, S. Ellen Jones and Green Valley elementary schools.

The nonprofit built a community garden three years ago at Fairmont, and shortly before the school closures were announced, it built another at S. Ellen Jones. The organization was preparing to build a garden at Green Valley later this spring before the school closures were announced, according to Let Us Learn Executive Director Gina Brown. Several months ago, the organization received an $18,000 grant from the Caesars Foundation to expand its reach in the community.

When everything suddenly slowed down due to the pandemic, Brown needed to find a creative way to continue programming.

“Our program mainly focuses on youth in our Title I schools, and we are in three schools, and for us to continue, we have to, like everybody else, think outside of the box,” she said.

Let Us Learn is now offering live events and videos for families to watch and/or participate in from their own homes. Brown is collaborating with Floyd County Purdue Extension Educator Gina Anderson to develop a live-streamed program called “Two Ginas in the Garden.”

The two Ginas have collaborated in the past for a school program called Growing Dinner From the Ground Up, in which Anderson would teach agricultural lessons and Brown, who has a background as a chef, would teach kids about food and nutrition. The virtual lesson will be an extension of that program, according to Brown.

“We’re trying to somehow continue our Growing Dinner From the Ground Up class,” Brown said. “We’d like to do like a split screen where [Anderson] would be in her garden, and I would be at home or in the Fairmont Elementary garden. She might teach composting or how to grow carrots, and I would make carrot pesto.”

Anderson said the classes will be focused on things kids can do from home — most people have some kind of container they can use to plant, and she looks forward to teaching gardening lessons from her own garden.

“Even though we’re supposed to be staying in place, there are tons of things we can still do outside that can make people feel better,” she said. “It’s all about going out and getting that sunshine.”

The gardening program is just one of the offerings. There will be five to six virtual programs a week, including readings of “garden stories,” cooking lessons and arts & crafts, according to Brown. Grantline Garden Center is helping the nonprofit present these programs with a big donation of garden-related arts & craft supplies, which students will use during virtual lessons with members of Let Us Learn.

On Friday, Brown set up a Zoom meeting with local families to teach students how to make decorated lightning bug jars from some of the donated craft materials, which parents picked up from Let Us Learn’s New Albany office to take home.

Anderson said they are still working out the details of the Two Ginas in the Garden program, and one of the challenges is interacting with a virtual audience. Through the videos, she hopes to reach people who hadn’t previously known about the programs offered by Let Us Learn or the Purdue Extension.

New Albany resident Melissa Blair’s 8-year-old son, Vaughan, has loved the Let Us Learn programming at Fairmont, and it inspired him to start gardening at home.

Blair, who also has volunteered with the nonprofit, appreciates Let Us Learn’s cooking lessons, introducing the family to new recipes and how to prepare meals on a budget.

The coronavirus pandemic has been a stressful time for the family as they stay at home and are careful to stay away from immune-compromised family members. Friday’s craft lesson with Let Us Learn was the first time her son has seen his friends since all the closures started, she said.

New Albany resident Megan Klingman also has worked as a volunteer for the nonprofit. She said the programs have created a sense of community for both her and her 8-year-old daughter, Olivia. The virtual programming creates a sense of normalcy, she said.

“It gives her a connection with her friends and with Gina [Brown],” she said. “She’s excited about it, and she still gets to learn.”

To learn more about the virtual programs, visit Let Us Learn Inc. on Facebook.