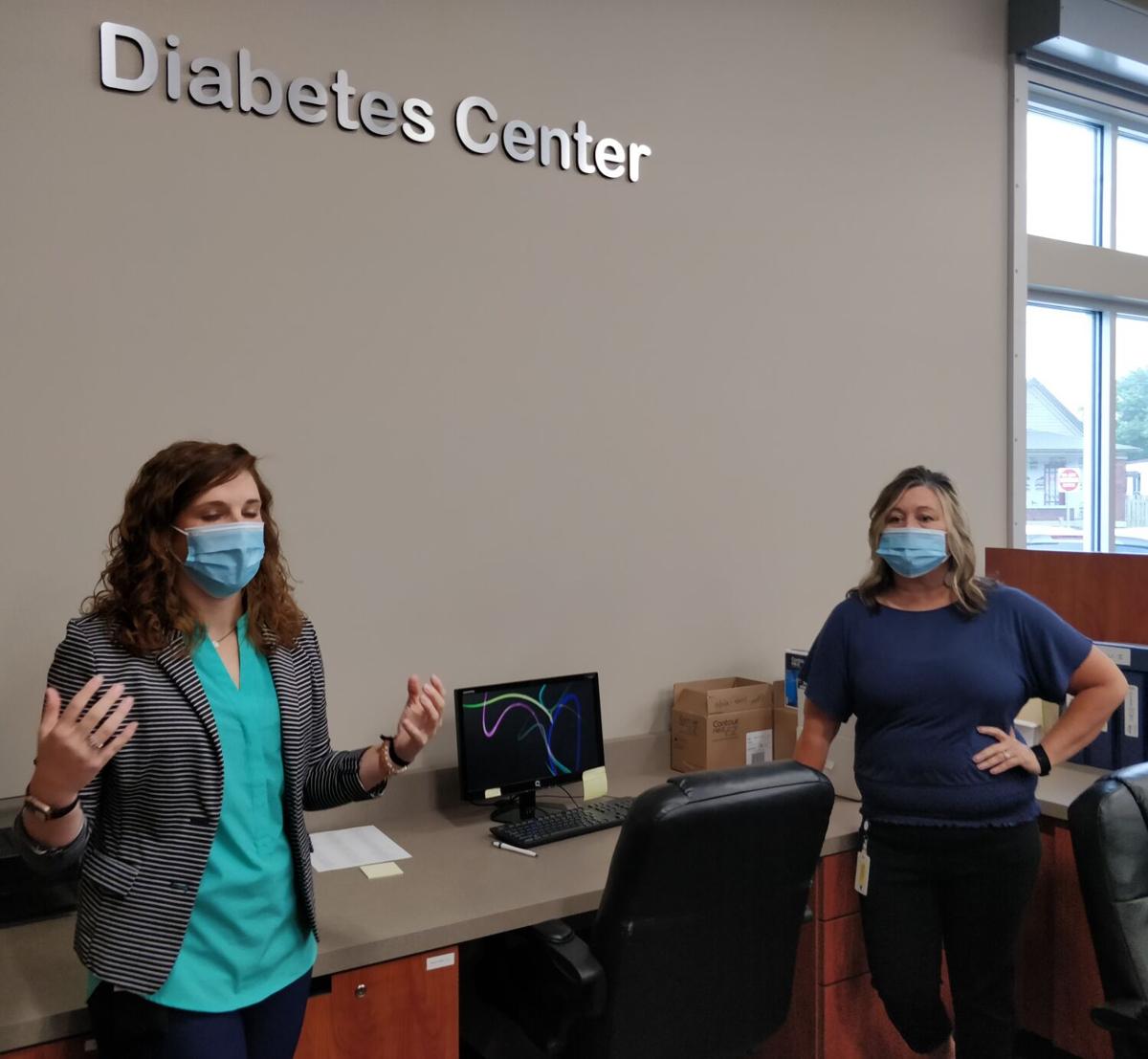 Madeline Moses (left), PharmD and director of Clinical Services at Mathes Pharmacy in New Albany, and Michelle Henderson, certified health and wellness lifestyle coach in the Diabetes Center at Mathes Pharmacy in New Albany, talk about a grant from the CDC’s National Diabetes Prevention Program to start a yearlong program helping people who who have been diagnosed as prediabetic or have high risk factors make lifestyle changes to avoid progressing to Type 2 Diabetes. 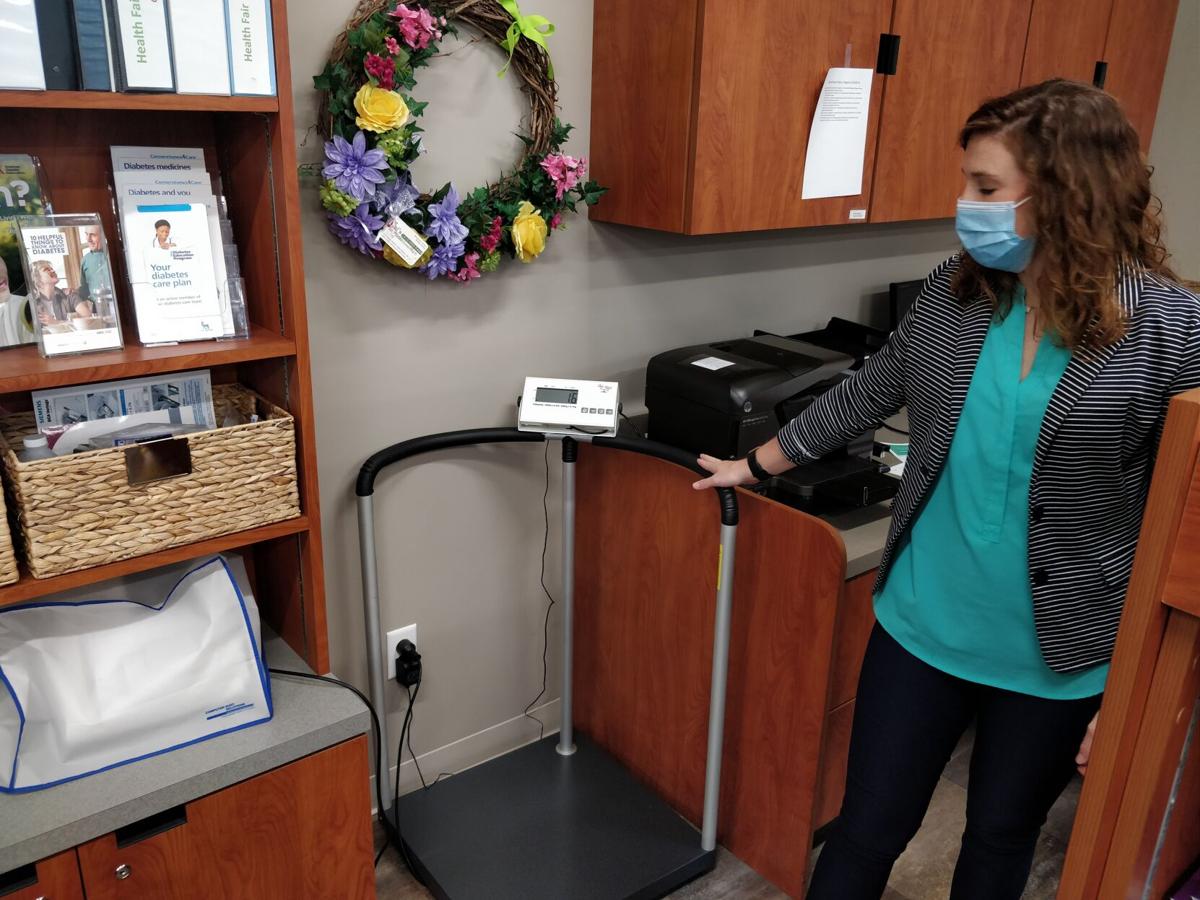 Madeline Moses, PharmD and director of Clinical Services at Mathes Pharmacy in New Albany, shows the scale used within the existing Diabetes Center at the pharmacy.

Madeline Moses (left), PharmD and director of Clinical Services at Mathes Pharmacy in New Albany, and Michelle Henderson, certified health and wellness lifestyle coach in the Diabetes Center at Mathes Pharmacy in New Albany, talk about a grant from the CDC’s National Diabetes Prevention Program to start a yearlong program helping people who who have been diagnosed as prediabetic or have high risk factors make lifestyle changes to avoid progressing to Type 2 Diabetes.

Madeline Moses, PharmD and director of Clinical Services at Mathes Pharmacy in New Albany, shows the scale used within the existing Diabetes Center at the pharmacy.

NEW ALBANY — A family-owned pharmacy in New Albany is expanding its commitment to community health with a new program aimed at preventing a life-threatening disease.

Mathes Pharmacy on Charlestown Road is one of 15 pharmacies in the country to be named recently as grant recipients in the PreventT2 Program, a year-long approach through the CDC’s National Diabetes Prevention Program, which provides support for people to make lifestyle changes before they’re diagnosed with Type 2 Diabetes.

The grant provides for the training of three certified health and wellness coaches and maintenance of the program in its initial year. There is space for up to 15 participants, who will meet in a group setting with the coaches once a week for the first six months and every few weeks in the second phase.

The goal is to help people already diagnosed with pre-diabetes or otherwise at risk for developing Type 2 — depending on weight, age, gender, family history and high blood pressure — manage healthy changes in a supportive setting, said Madeline Moses, Director of Clinical Services at Mathes and PharmD.

“We’re just really excited about it because this is one of the first programs that is focused on prevention instead of treatment,” Moses said. “Many people, they’ll go to the doctor’s office and they’ll hear ‘oh, your sugar is a little bit up, make some changes, you need to exercise, lose some weight, I’ll see you in six months.’

“And then they’re surprised in six months when people weren’t able to make any sort of change.”

She said this program can help fill that gap, focusing on goals with weight loss and nutrition. According to the CDC, 34.2 million people in the U.S. — just over 10% of the population — had Type 2 diabetes in 2018.

One in three adults in the U.S. is considered prediabetic, and expected to reach the nonreversible stage — which can lead to immune system and cardiovascular issues, blindness, stroke, nerve damage and loss of fingers and toes — within five years if changes aren’t made. Of these, about two-thirds don’t even know they’re in the prediabetic stage.

But an individual can lower the risk of developing Type 2 by doing things like losing 5% to 7% of body fat and exercising 150 minutes a week, which Moses said the program can help support. She said it might sound daunting, and it is work. But participants won’t be at it alone.

“There’s no sugar coating — making lifestyle changes is difficult,” she said. “It takes time and it’s not necessarily something you learn once. It’s more about motivation and consistency than it is about knowing what it is you need to do.”

She said part of this will be about helping participants learn to set realistic goals.

“[For] someone who maybe had never had any formal education on lifestyle changes, it might sound reasonable to say ‘I’m going to lose 100 pounds in two months,’” she said. “When we set unrealistic goals for ourselves, we set ourselves up for disappointment and when we don’t meet those goals, we give up because that was frustrating and didn’t work as well.”

This is something Michelle Henderson, certified health and wellness lifestyle coach at Mathes who also will be coaching in the new program, has seen in her work coaching people in weight loss.

“I’ve had somebody lose 45 pounds, 70 pounds, and it’s life-changing for individuals,” Henderson said.

“People are looking for help and that’s why we’re really focused on getting the word out for this program. People are looking but I think they just don’t know where to go or who to seek. People need that accountability and they want to feel a part of something.”

Moses said the program fits in with the pharmacy’s efforts to go beyond just refilling prescriptions but to help make healthier changes within the community.

“We are very heath-driven here,” she said. “We pride ourselves on our programs that we offer here at Mathes. We just want the community healthy.”

• One in three adults in America have prediabetes, and almost half are not aware, according to the Centers for Disease Control and Prevention (CDC).

• WHEN: Class starts Aug. 11 (intro session Aug 4.) and will meet once a week for an hour for the first six months, every two or three weeks second half of program

• WHO: Anyone who has been diagnosed with prediabetes OR has risk factors including age, weight and family history or diabetes

COST: No cost to participants in the initial round of classes; Mathes Pharmacy is able to get the program started through a CDC grant.

• An information session will be held Aug. 4 at 6 p.m. at Mathes Pharmacy.