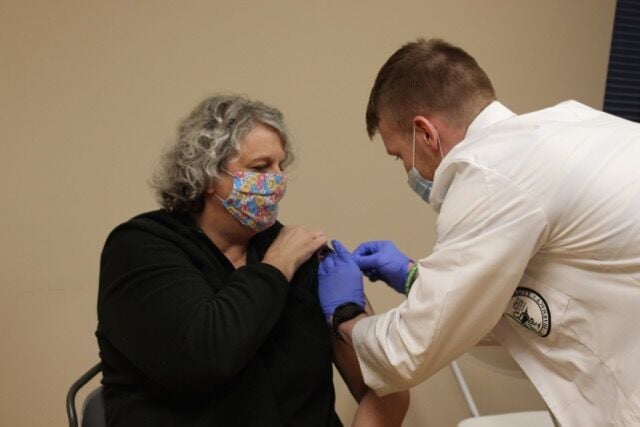 Lisa Ralston, a home health aide, gets her second dose of COVID-19 vaccine Monday at Clark Memorial Health. Representatives there and at Baptist Floyd report that more healthcare workers are getting vaccinated, which is safer for patients and helps with staffing issues. 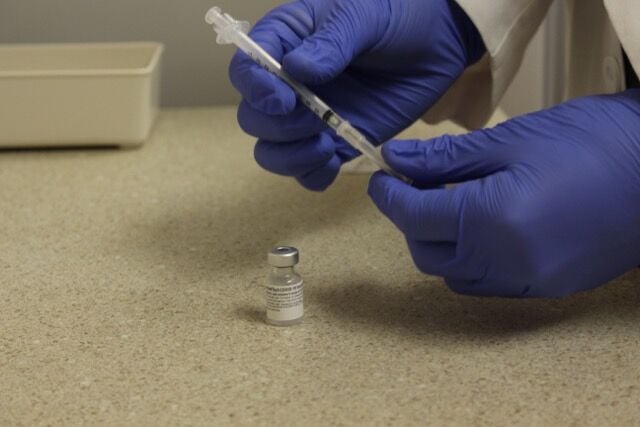 Jon Foushee, pharmacy clinic coordinator at Clark Memorial Health, prepares a COVID-19 vaccine Monday. Since the week of Dec. 14, the hospital has vaccinated 13,644 people, with 10,000 doses being given at Baptist Health Floyd during the same time period, some for second doses. 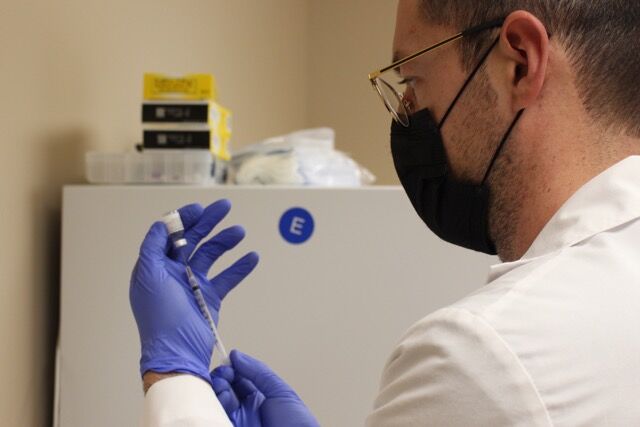 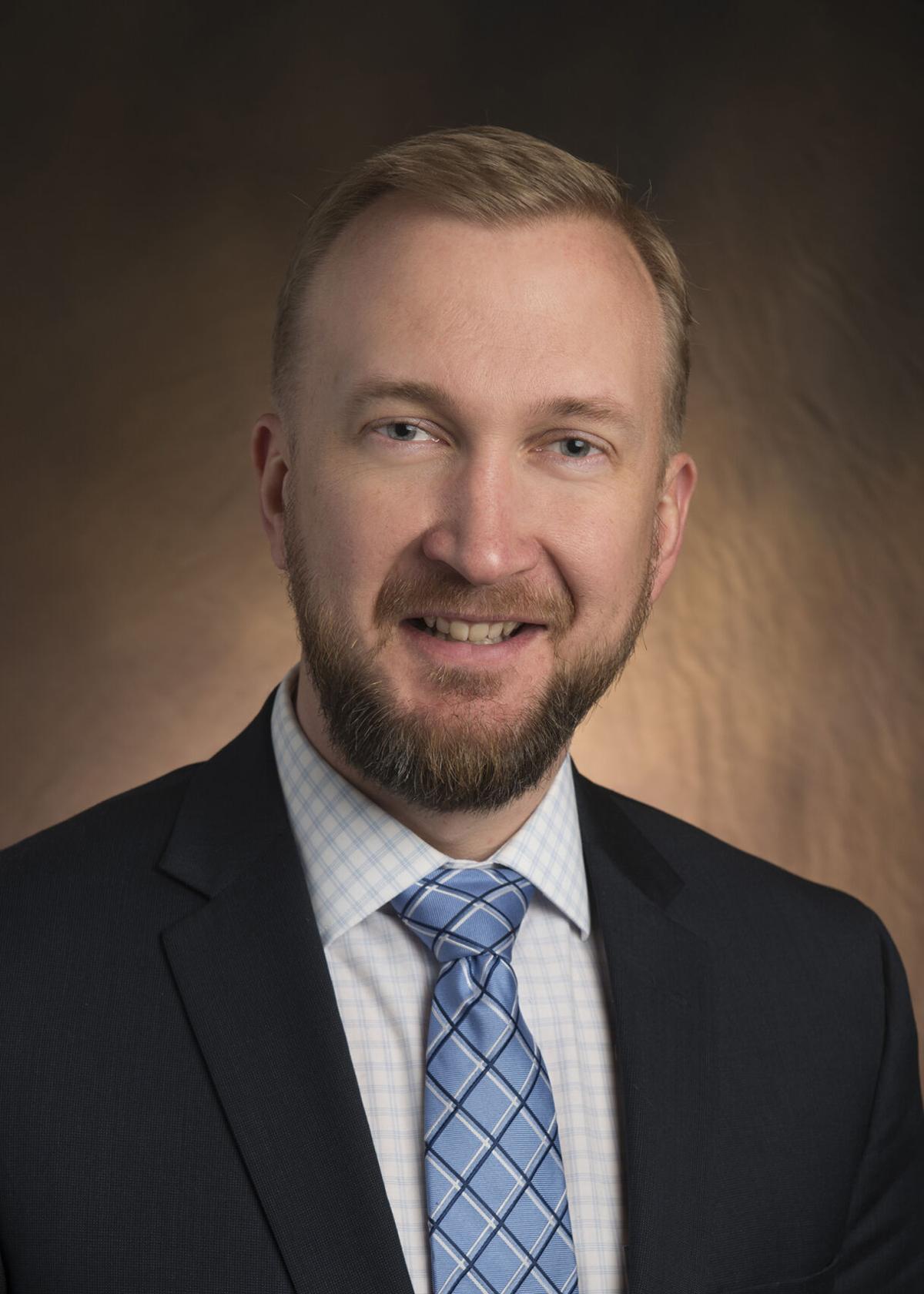 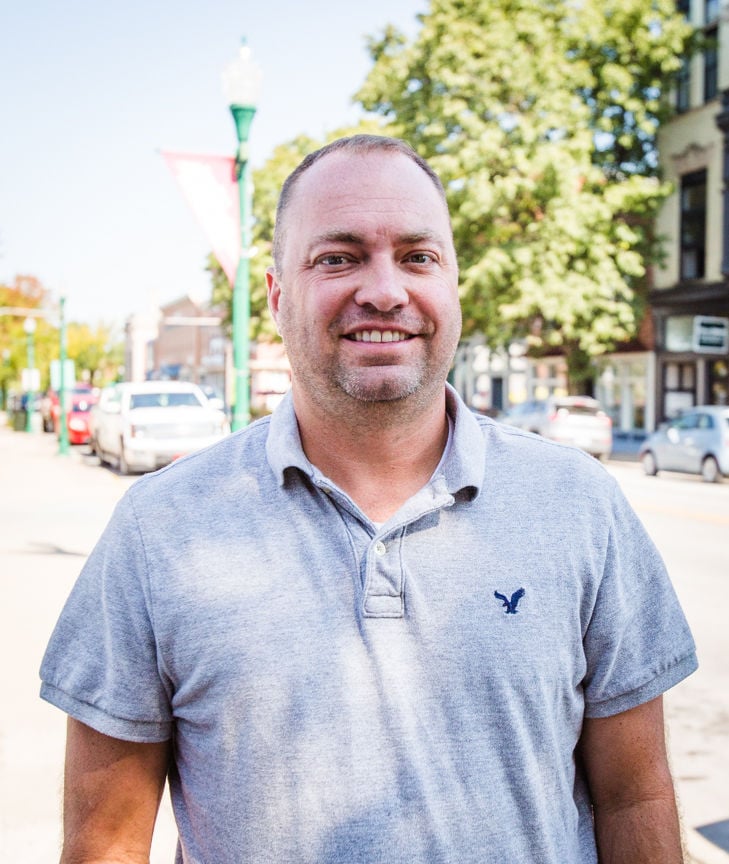 Lisa Ralston, a home health aide, gets her second dose of COVID-19 vaccine Monday at Clark Memorial Health. Representatives there and at Baptist Floyd report that more healthcare workers are getting vaccinated, which is safer for patients and helps with staffing issues.

Jon Foushee, pharmacy clinic coordinator at Clark Memorial Health, prepares a COVID-19 vaccine Monday. Since the week of Dec. 14, the hospital has vaccinated 13,644 people, with 10,000 doses being given at Baptist Health Floyd during the same time period, some for second doses.

SOUTHERN INDIANA — Hospitals in Clark and Floyd counties report that more health-care workers have been on board with getting vaccinated against COVID-19 than originally projected, an uptick they say is safer for the health facilities and community and helps prevent staffing shortages.

Lance Ballard, director of pharmacy at Clark Memorial Health, said that about four out of five hospital staff have now received at least the first dose of vaccine since the rollout began Dec. 14.

“We want to make sure everybody at the hospital has had it offered to them and that they know that they can take it,” he said. “Our goal, of course, is to get everyone vaccinated, but four out of five right now I think is very strong.”

Ballard said this contributes to the well-being of patients who can know their exposure is minimized and also help with staffing issues hospitals — like other employers — have seen during the pandemic.

“We don’t have as many people on quarantine or out with COVID,” he said. “Our numbers have been trending down; we’re going in a positive direction with that and I think the vaccine has been playing a role.”

Brian Cox, director of operations and emergency preparedness at Baptist Health Floyd in New Albany, said between 60% and 65% of health-care staff have been vaccinated — more than double the roughly 30% who responded positively to a survey on their intent to take the vaccine. Some of those not getting vaccinated right now are people who have already had COVID and thus expected some protection.

Cox said within a few weeks of the Baptist Health Floyd drive-thru vaccination clinic opening Dec. 17, the percentage of health-care workers signing up for appointments had gone up to 50% and 60%.

“We’re catching some people now who have seen their co-workers have two vaccinations, do OK, feel better that they’re a little more protected so then they’re ready to sign up,” he said. “The more we can keep them here to take care of those patients the better.”

Dr. Klaus Boel, chief medical officer at Clark Memorial, said hospital staff, on the frontlines of caring for people with the virus, may be more acutely aware of the reality of COVID-19 than some in the community who may not have experienced it firsthand.

“I don’t know if everybody truly sees the virus out in the community, but there is no way you can work in a hospital and not see the impact,” he said. “There’s no way you can’t see the number of people who are suffering and dying and the families that being disrupted by this and losing loved ones they can’t be with.”

As of Monday, there had been 613,228 positive cases identified in Indiana, the state department of health reported — 2,210 of them new. There were 12 new deaths reported of the overall 9,352 and the state’s seven-day rolling positivity rate for unique individuals between Jan. 12 and Jan. 18 was 18%.

The seven-day positivity rate for unique individuals was 22.4% in Clark County and 22.8% in Floyd.

Lisa Ralston, a home health aide in Southern Indiana, was among the health-care workers getting vaccinated as soon as possible. She was at Clark Memorial Monday for her second dose — required with both the Pfizer and Moderna vaccine. She said she had not hesitated on whether to get the shots.

“The reason is that I work around young children and families in their homes,” Ralston said. “Plus I’ve already had COVID and I don’t know how long that immunity lasts and I don’t want it again.”

She said that with her first dose, the only side effect had been a little soreness at the site of the shot for a couple of days.

“It really shows that they’re leading by example,” Clark Memorial Health President Martin Padgett said Monday. “When they go into the community or they talk to their friends or family members who meet criteria, they can talk about how they feel and why they got it.”

As of Monday morning, Clark Memorial had vaccinated 13,644 people, Ballard said. Cox said just over 10,000 doses had been given at Baptist Health Floyd, a number that included some of the second doses. Both hospitals had around 4,000 doses for this week.

Vaccinations started in mid-December with frontline healthcare workers, followed by others in health care and first responders. Two weeks ago, clinics operated by the Clark and Floyd County health departments began the first age-based mass vaccinations, starting with residents 80 and older and opening a week later to those 70 and older.

The first week, each county received 600 doses for the two community sites. In week two, Clark had 400 and Floyd 1,400. On Monday, Clark County Health Officer Dr. Eric Yazel said that the county had been given an additional 1,200 doses for this week, for a total of 1,600. The immunizations will be scheduled for Thursday, Friday and Saturday; the registration site will open sometime Tuesday at www.ourshot.in.gov or by calling 211.

“I’m really excited, it’s just one of those things...I understand that it’s hard to come by now supply-wise,” he said, adding that the clinic has the capability to do much more. Yazel previously told the News and Tribune that if medication wasn’t an issue, they could do 1,000 or 1,500 patients per day. “We think we’ve got a really good setup at our site.”

The Clark County Health Department has also decided not to extend an order in place since November that limited capacity and hours in bars and restaurants. Over the weekend, the order, which had limited occupancy to 75% in restaurants and required bars to close at 10 p.m., expired. It had previously been renewed every two weeks.

Yazel said the reasoning comes as he’s seen the seven-day unique positivity rate drop sharply more than 12% in the past few weeks to the 22.4% reported Monday by the Indiana State Department of Health.

“We think as our really troublesome holidays are over and people are staying home a little more, it’s reasonable to lift some of those restrictions,” he said. However some rules, including the 25-person limit to events, remain in effect under state mandate.

These are due to Clark County being one of about a third of Indiana counties in the red, which it’s been for a few weeks. The metric, which is based on the number of new cases per week per 100,000 residents and the seven-day positivity rate for all tests, is released each Wednesday by the state. Yazel said he expects to see Clark County back in orange this week, but said the restrictions associated with red must continue for a week after.

Floyd County previously had similar restrictions in place on bars and restaurants, which have not been renewed. A mask mandate remains in effect in Floyd County.

Clark County Health Officer Dr. Eric Yazel announced Monday that the health department has received an additional 1,200 COVID-19 vaccine doses, which will be scheduled for this Thursday, Friday and Saturday.

Registration will open up sometime Tuesday for the new appointments at www.ourshot.in.gov or by calling 211. Health-care workers, first responders and those 70 and older are eligible to receive the vaccine in Indiana.