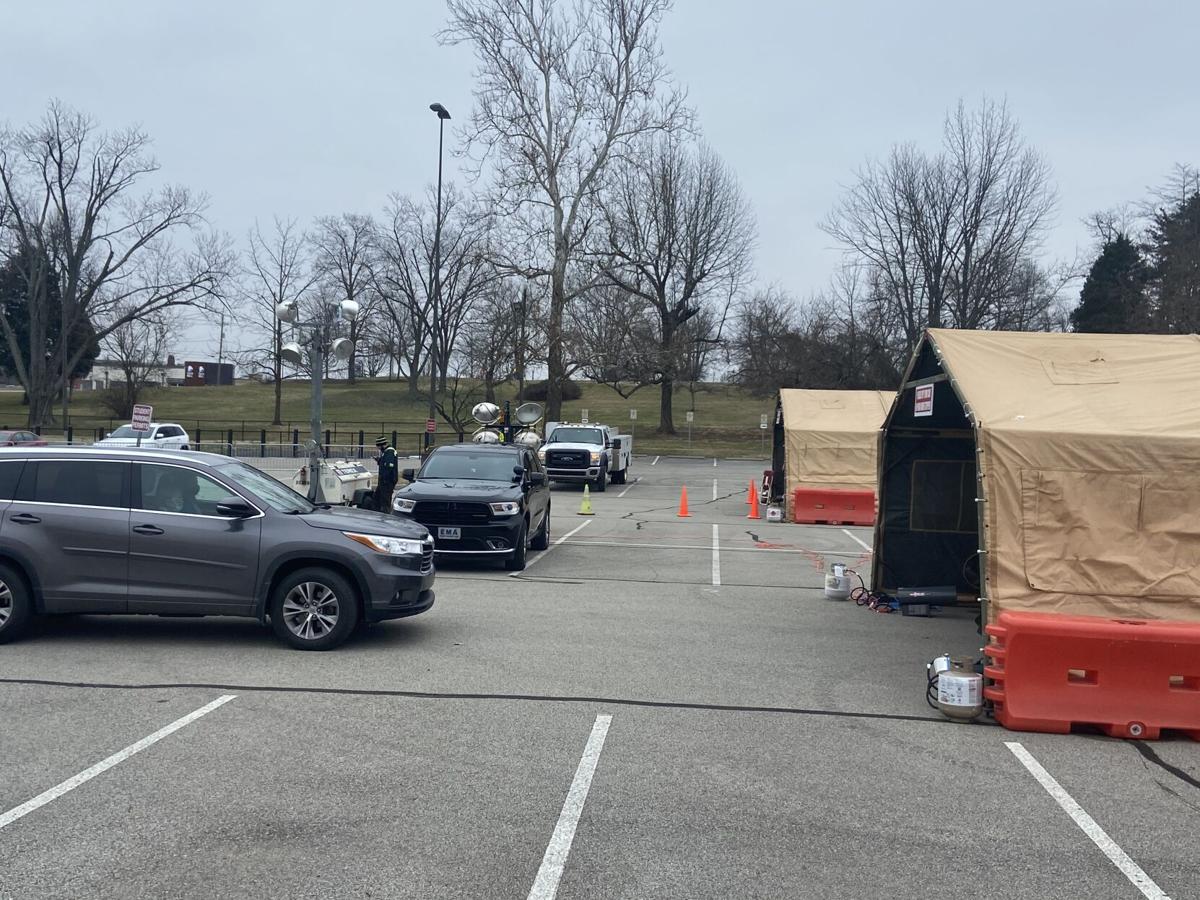 IUS began a drive-thru COVID-19 vaccination clinic Monday in coordination with the Floyd County Health Department. The new clinic started with residents 80 and older, but more age groups are expected to open up in the coming weeks. 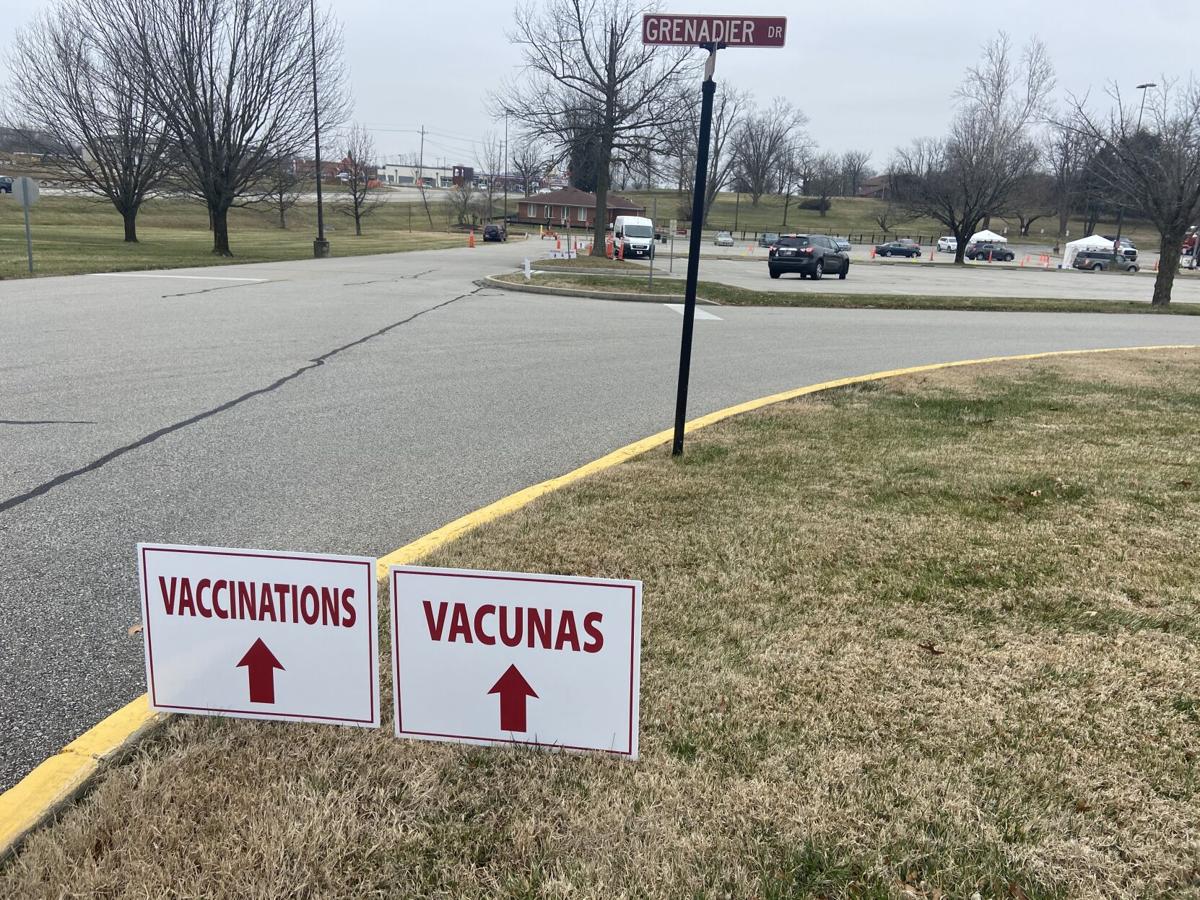 Signs point drivers toward a drive-thru COVID-19 vaccination clinic at IUS that opened Monday to residents 80 and older. Other age groups are expected to be added soon. 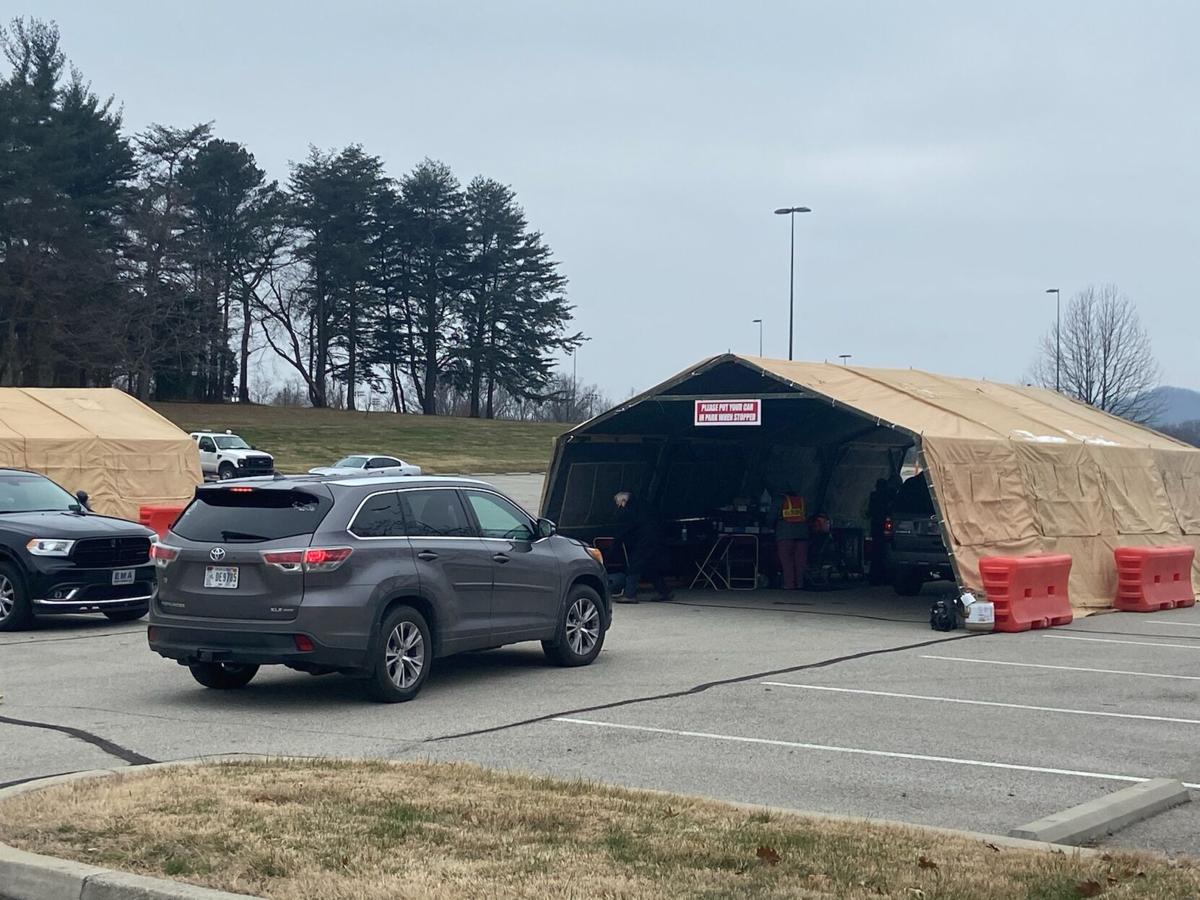 As of Tuesday afternoon, more than 500 people had been vaccinated in Clark and Floyd counties in the new tier opened at the start of the week — residents 80 and older.

IUS began a drive-thru COVID-19 vaccination clinic Monday in coordination with the Floyd County Health Department. The new clinic started with residents 80 and older, but more age groups are expected to open up in the coming weeks.

Signs point drivers toward a drive-thru COVID-19 vaccination clinic at IUS that opened Monday to residents 80 and older. Other age groups are expected to be added soon.

As of Tuesday afternoon, more than 500 people had been vaccinated in Clark and Floyd counties in the new tier opened at the start of the week — residents 80 and older.

SOUTHERN INDIANA — More than 12,000 people had been vaccinated against COVID-19 in Clark and Floyd counties as of the end of Tuesday, more than 500 of whom are community members 80 and older.

Since they received the first doses of the Pfizer BioNTech vaccine the week of Dec. 14, Clark Memorial Health has vaccinated about 8,000 people in Tier 1A of the Centers for Disease Control and Prevention guidelines, largely health-care workers and first responders.

Baptist Health Floyd in New Albany had vaccinated around 4,000 people at its drive-thru clinic as of Monday, a quarter of whom have received the second dose required at least three weeks later for the Pfizer vaccine.

On Friday, the health departments in Clark and Floyd counties began signing people up as the first participants in Tier 1B, the age-based rollout that started with those 80 and older at the beginning of the week.

All the spots have been filled for the 600 doses available per county for this first week, and Southern Indiana health officers reported about 570 people in this group were expected to have received the shot as of Tuesday.

The first mass vaccination site in the county has been set up at a vacant warehouse on Lewis and Clark Parkway in Clarksville.

“The Indiana State Department of Health showed that as of Tuesday, while those 80 and older only made up 6.7% of overall positive cases in Floyd County, they accounted for 55.2% of all deaths from the disease so far. In Clark County, those 80 and older make up just 3.5% of cases but account for just under 30% of deaths.

“It was just really cool, a lot of them were emotional because it’s been a tough ride,” Yazel said. “The positivity and optimism is something we haven’t seen up until now.”

He said he feels the older people have been very afraid, with many of them keeping a close watch on the statistics that show them some of the most at risk.

“The whole time everybody talks about ‘well this is something that only affects the very old’...they are the old,” Yazel said. “When everybody’s talking about ‘oh we should open up,’ they’re the ones most at risk so I think a lot of them have been staying at home out of fear for their own safety.

“I don’t care if you’re one year old or 101 years old, nine to 10 months of social isolation isn’t good for anybody.”

Floyd County Health Officer Dr. Tom Harris said the 120 people 80 and older they vaccinated Monday was more than they’d planned for the first day of rollout at the drive-thru mass vaccination clinic. More than 170 people have volunteered, including nursing students at IUS. The EMS workers on standby in case there is an issue have given shots as well.

“The proof of concept works,” Harris said. “We really like using the stay-in-your-car method for the elderly because we [don’t] have to worry about them getting out of a car, getting into a building, getting back in the car.” Although the Clark County community site is indoors, staff can go outside to do the immunizations in cars if needed.

Both counties are expected to get at least 400 additional doses next week, but they say they have the capability, volunteers and space to do much more than that. Rather than the 150 a day they’re doing this week, Harris said if they had a full supply, they could “easily do 500 a day and I think that 750 would not be unreasonable,” he said. “If the supply chain opens up, we can give a lot of people a lot of shots in a short period of time.”

In Clark County, they could do as much as 10 times as what they’re doing this week, or 1,500 per day, at the community site.

But although the vaccine supply is fluid and changes rapidly, both counties are ready to go if more becomes available.

“If they put 1,000 on our doorstep today, I make a call, we get some volunteers out there and flex some more stations open and we’re going,” Yazel said.

In all cases, the patients wait for 15 minutes after receiving the shot to ensure they have no adverse reactions. On Monday, a younger patient in the Tier 1A category had to be given epinephrine and treated in the emergency room after receiving a vaccination at Clark Memorial. The patient reported a swelling in the throat in the minutes following the shot, although there was no difficulty breathing, and no history of food allergies.

The patient was treated in the emergency room, as is standard when epinephrine is given, and later released in good health, hospital representatives said Tuesday.

There have been no reports yet of allergic reactions in Floyd County.

The Associated Press reported Tuesday a push at the federal level to get states to open the immunizations to those 65 and older, regardless of co-morbidities. Indiana state officials have not addressed the directive, but it could be broached at the weekly health news conference hosted by Gov. Eric Holcomb on Wednesday.

The state was already heading in this direction likely within weeks, depending on vaccine distribution. After those 80 and above, those 70 to 79 become eligible then 60 to 69. But not every state has taken the same approach. Some, for instance, have focused on essential workers such as teachers before the elderly populations.

He brought up the example of Kentucky and Indiana, which have gone different routes after the initial healthcare workers.

“Indiana is taking the age-based approach, and they took this approach based on illnesses, hospitalizations and death,” Padgett said. “Fifty-two percent of the individuals dying from the virus are 80 and above and you get down to 93% of those individuals passing away from the virus 60 and above.”

He said while some states are taking an occupation-based approach, that wouldn’t necessarily have the same effect on hospitalization numbers.

“We do want to get kids back in school, and, if you vaccinate teachers you can do that but that doesn’t really help the hospitalizations,” he said “Vaccinating the elderly impacts that.”

“If we can get these age groups and whittle it down, that will really help decrease the number of deaths and hospitalizations,” Schroyer said during the community meeting, hosted by One Southern Indiana.

The local hospitals and health departments get their directives from the state on which groups to move to vaccinate and how much vaccine they receive. They use all of their doses for as many people as they can, and plan for their second doses three or four weeks later — depending on whether they’re using the Pfizer of Moderna vaccine — when new shipments come in. Doses are not held back locally for a person’s second round.

“I’m very proud of Indiana for how this has gone,” Schroyer said, agreeing with Padgett that wider community vaccinations could begin in the coming weeks.

“I know there’s an awful lot of work going on to increase the amount of vaccine that is being produced [and] as some of the other pharmaceutical companies get approval for theirs, we’ll just see even more available.”

Padgett said that throughout this year, local hospitals in Clark, Floyd and other surrounding counties have worked together to help ensure resources were available.

He said early on that hospital leaders in Southern Indiana “fully committed that if somebody was having a larger outbreak than us then we would give them the resources that they needed to take care of their patients,” he said. “We worked together every day to try to help each other out...for the greater good of the community.”

What the numbers say

The Indiana State Department of Health reports a total of 570,477 positive cases since March with 3,191 of them new as of the Tuesday numbers. There have been 8,373 deaths statewide, 88 new.

Norma Lois Lee Lockard, age 82, lost her battle with breast cancer Saturday, January 16, 2021 at Clark Memorial Hospital. Norma was born in Casey Co. KY. and moved to Jeffersonville, IN. in 1964. She retired from Clark Co. government after working in the Treasurer and Assessor offices. Norma…

Valerie Dempsey Spann, 70, of Clarksville, Indiana passed away January 16, 2021 at Clark Memorial Hospital. She was born on February 13, 1950 in Louisville, Kentucky to the late Jeffrey L. and Virginia Crawford Dempsey. She was retired from the Clarksville Community School System where she w…

Michael Eugene McKinley, 74, of Sellersburg, Indiana, passed away on Wednesday, January 13, 2021. He was born in New Albany, Indiana, on October 25, 1946. Michael attended Holy Trinity Catholic School, Flaget High School and went on to graduate from New Albany High School in 1965. He had a c…