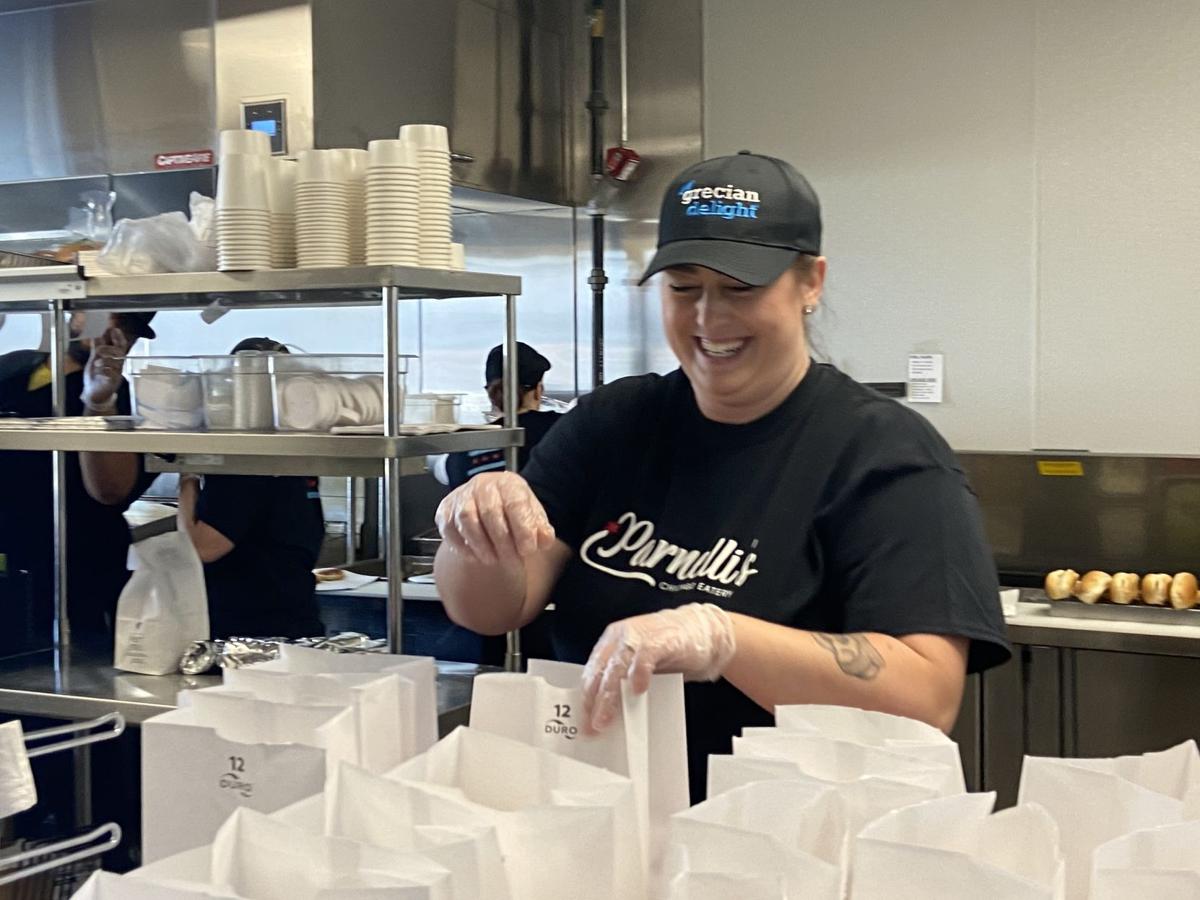 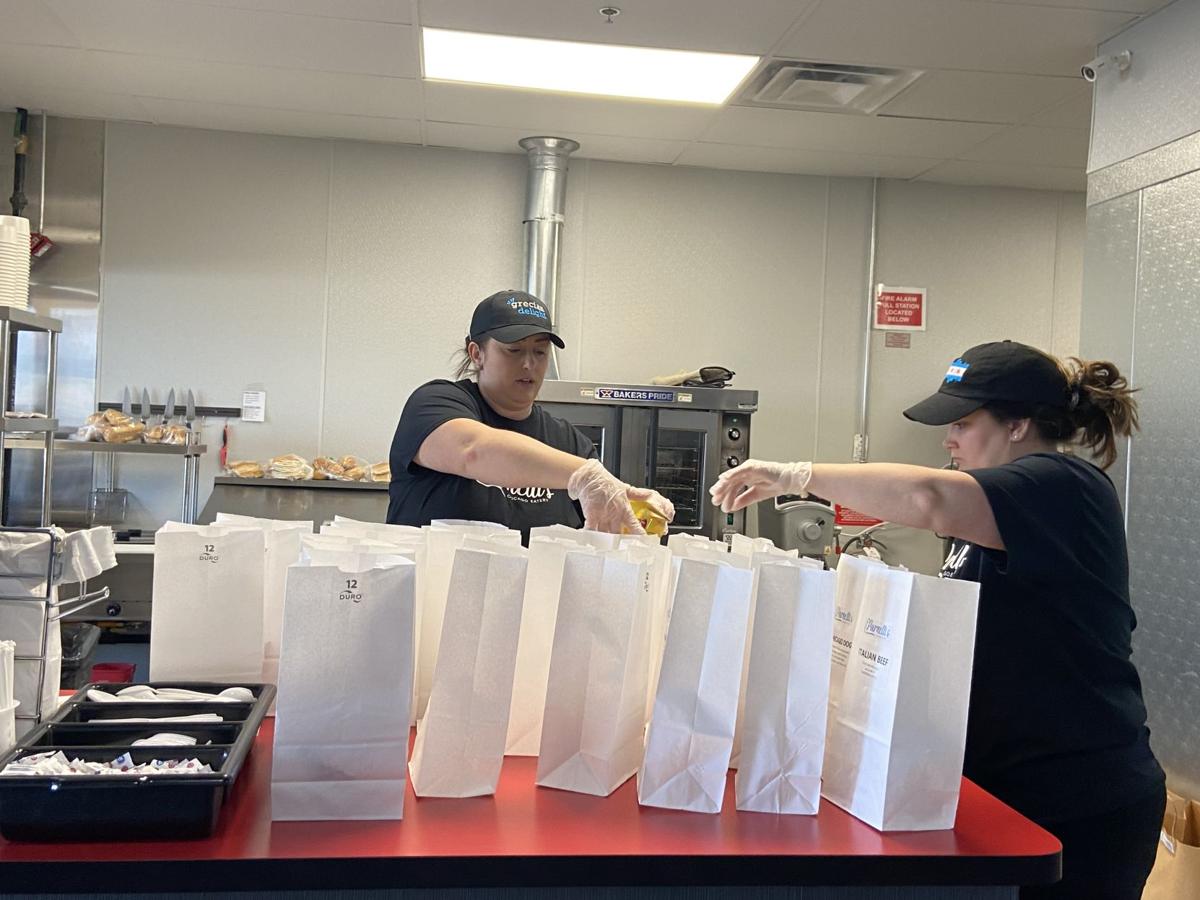 Parnelli’s Chicago Eatery employees Heather Campbell and Chanda Wolfe add potato chips to bagged lunches Thursday as they prepare meals for staff at Clark Memorial Health. The Jeffersonville restaurant is providing free meals to the hospital with the help of monetary donations from the community. 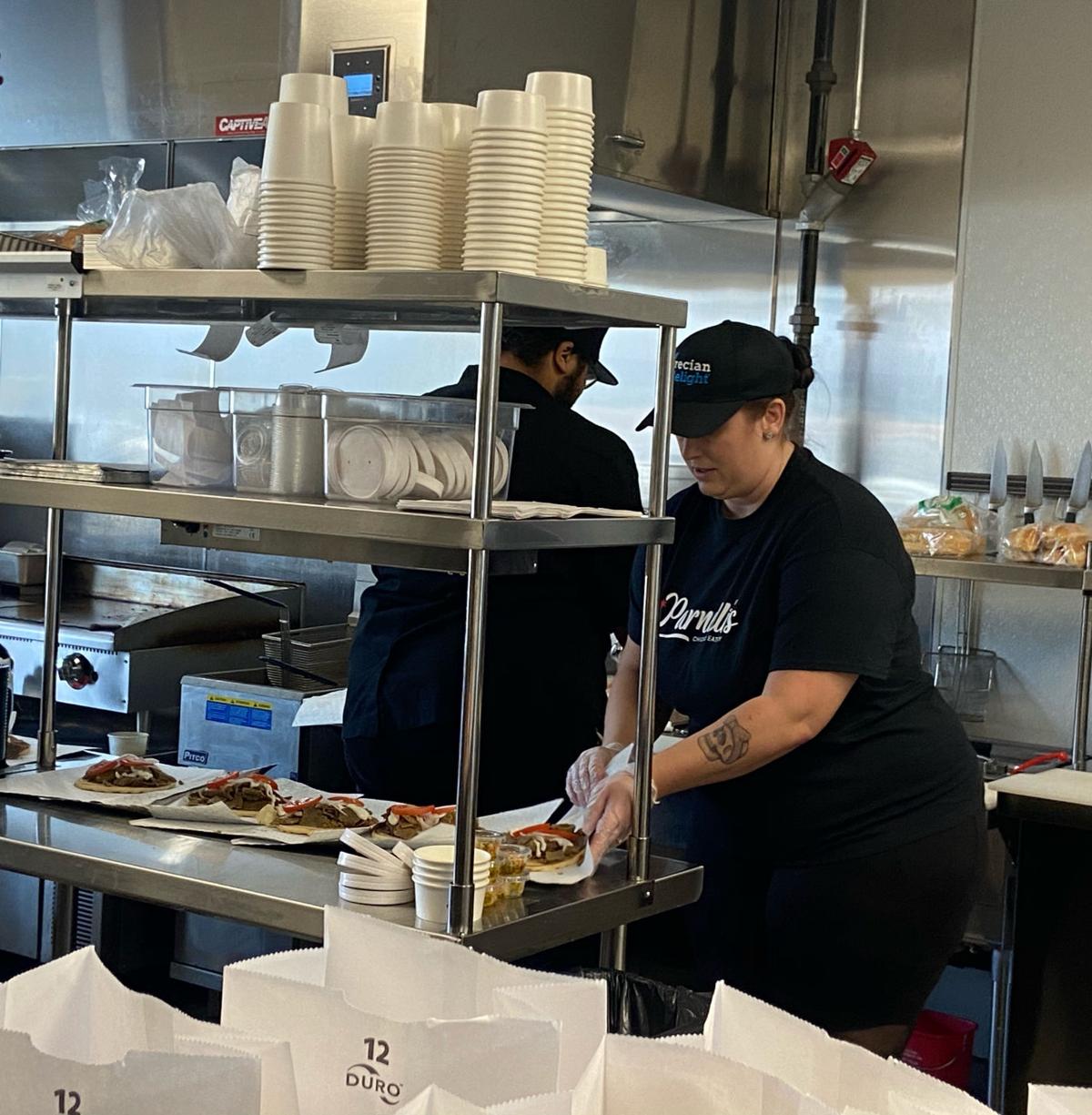 Parnelli’s Chicago Eatery employees Heather Campbell and Chanda Wolfe add potato chips to bagged lunches Thursday as they prepare meals for staff at Clark Memorial Health. The Jeffersonville restaurant is providing free meals to the hospital with the help of monetary donations from the community.

JEFFERSONVILLE — As local hospitals respond to the coronavirus pandemic, a Jeffersonville restaurant is showing its support by giving out free meals to healthcare workers.

Parnelli’s Chicago Eatery, a restaurant that opened three months ago on 10th Street, is providing lunches and dinners to staff at Clark Memorial Health through its “Feed A Floor” campaign, and it will soon provide meals to healthcare workers at Baptist Health Floyd in New Albany. The restaurant is accepting monetary donations from the community to support the campaign, and it remains open for curbside pickup and delivery.

Parnelli’s is providing the healthcare workers with individually-packaged bags with Chicago-style meals such as hot dogs and Italian beef sandwiches, along with chips and dessert. Dr. Patri Marconi, the restaurant’s owner, worked for six years as a surgeon at Clark Memorial, and both the restaurant’s manager and catering director previously worked with her at the hospital.

Earlier in the week, Marconi’s family offered to buy a meal for a floor at the hospital, and the idea grew from there.

“My staff was like, ‘hold on a second, this is actually a really good idea,’” she said. “People don’t necessarily know how to help out or how to show their appreciation, and then they’d be able to help us out as well, because we opened Jan. 20, and we hadn’t been open very long before this all hit, so it was very difficult to navigate through all that.”

Marconi first posted about the campaign Tuesday on a neighborhood Facebook page, and by the end of the day, five meals for the hospital were already paid for. On Wednesday, the restaurant received two donations of about $1,000 each, including one from McRae Enterprises and one from an anonymous donor.

“It’s been such a huge response in such a short period of time,” she said. “There’s just been an outpouring of support. There’s been people online who’ve been doing what they can with $15 or $20, which has been amazing, because we’ve been adding those up to be able to buy a meal, and then we’ve had people who have been like, you know what, I’m giving you $250, you can buy a meal for the floor.”

Chanda Wolfe, manager at Parnelli’s, used to work as a certified medical assistant at Clark Memorial. The restaurant is working to make sure no staff member at the hospital is left out, she said. They have provided meals to departments such as the emergency room, intensive care unit and environmental staff.

“We’re recognizing them, and we applaud them for their hard work,” she said. “They’re right there with these patients who have the virus, and they are seeing the patients not able to have family around them and being alone during that time.”

Heather Campbell, catering director at Parnelli’s, previously worked as a certified nursing assistant at Clark Memorial. Healthcare workers have been thankful for the meals, she said, and some told them that the meal improved their day.

“It feels really good, especially because we were part of healthcare, so you kind of feel guilty that we’re not in there anymore now — it’s nice to know that we can be part of making their day a little brighter, maybe, because I’m sure they’re stressed out and really busy,” she said. “That’s definitely what makes me feel good about it.”

Marconi said they want to start providing meals to Baptist Health Floyd this week. She is happy to offer a show of support to healthcare workers during a difficult time.

Beth Adams, an intensive care nurse at Clark Memorial, was among the healthcare workers who received a meal from Parnelli’s, and the support from the community during this stressful time is “just priceless,” she said.

During these busy times, it is hard to find times to stop and eat, and Adams typically cannot leave the floor long enough to get to the cafeteria. So she was grateful for a chance to eat a Chicago dog and try some baklava, which was “like a Band-Aid for your soul,” she said.

She also appreciates that the “Feed A Floor” campaign involves several people who have worked in the healthcare field.

“For them to say, we know you’re still in the trenches, and we appreciate you and we remember what that’s like and we want to support you — it’s extra meaningful because they do get it, they know how hard we work, and they know how hard everybody in the hospital works, whether it’s environmental services or nurses, and it’s just meant the world to all of us to have them come back and say, we didn’t bail on you,” Adams said.

Visit https://direct.chownow.com/order/17676/locations/25284 to donate money for the “Feed A Floor” campaign.