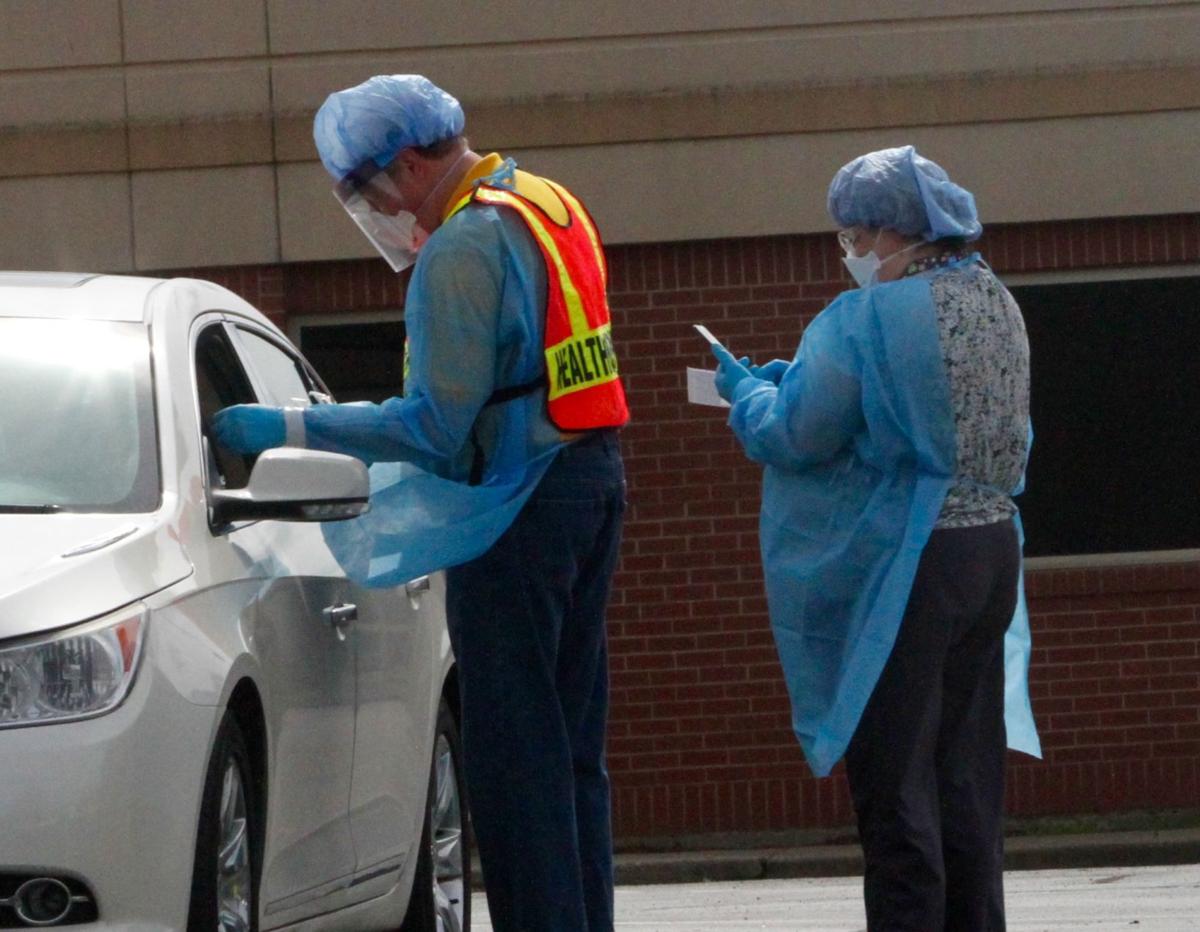 Health officials talk with patients at a drive-through COVID-19 testing center hosted by the Floyd County Health Department in March. 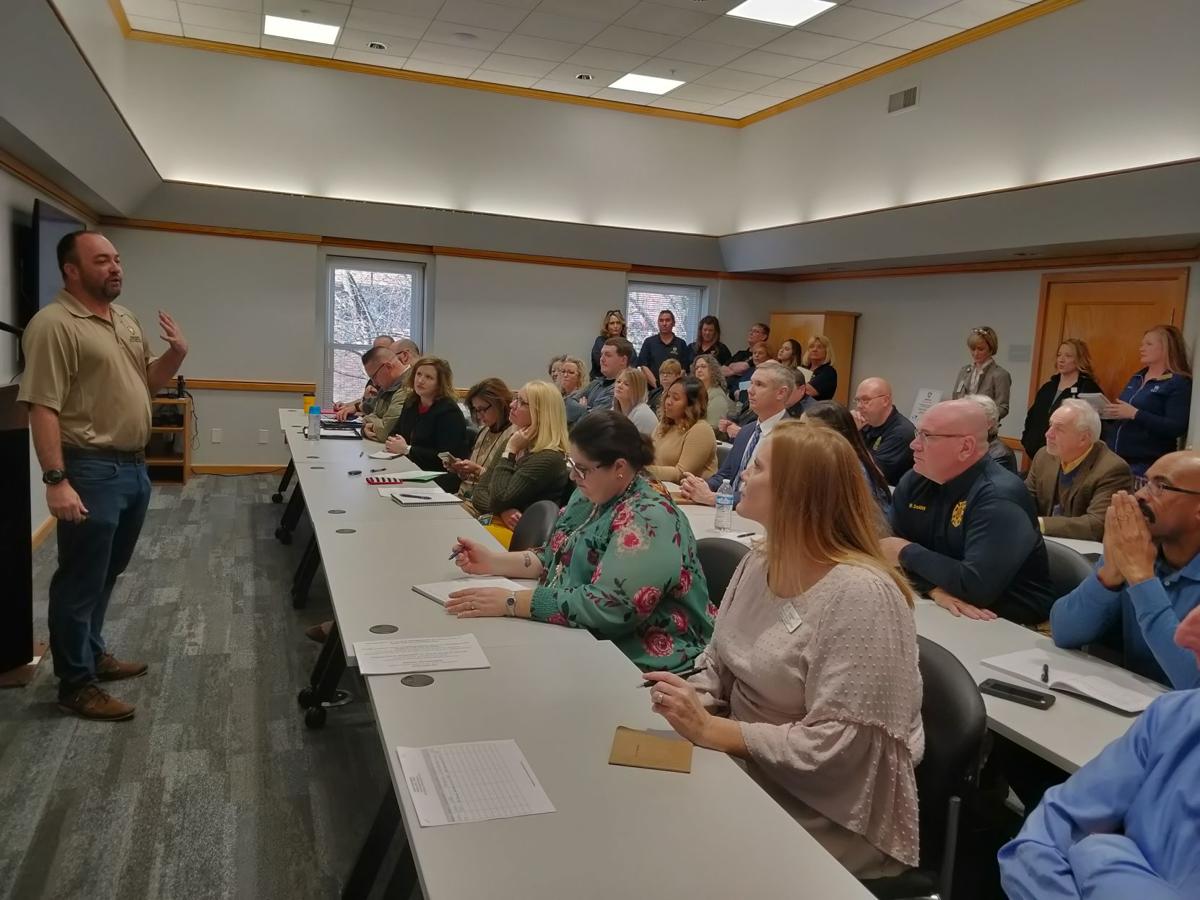 Clark County Health Officer Dr. Eric Yazel at a meeting in early March with community leaders, to discuss plans then for handling COVID-19 before it had been identified in Southern Indiana.

Health officials talk with patients at a drive-through COVID-19 testing center hosted by the Floyd County Health Department in March.

Clark County Health Officer Dr. Eric Yazel at a meeting in early March with community leaders, to discuss plans then for handling COVID-19 before it had been identified in Southern Indiana.

INDIANA — As Indiana nears the fifth stage of reopening after more than three months of restrictions for businesses, schools, government operations and other activities because of COVID-19, local health officials remain watchful.

On July 4, most of Indiana is set to enter the least restrictive stage of Gov. Eric Holcomb’s five-stage “Back on Track Indiana” plan, after mandated closures and a stay-at-home order issued in late March.

While masks will still be recommended in public and guidelines in place with social distancing and cleanliness, restaurants, bars, nightclubs, personal services and retail stores can be fully open, restrictions will be lifted at amusement and water parks, recreational youth and adult sports can resume and gatherings of more than 250 people will be allowed.

Indiana as a whole has shown an increase in testing and decrease in percentage of positive cases throughout the previous reopening phases. As of Thursday, the 44,140 cases identified accounted for 9.7% of the 453,890 tested. While hot spots still remain or have re-emerged in other parts of the state, Southern Indiana is seeing the same or fewer positive cases.

“We’ve really been watching to see what’s happening elsewhere to see if we’re seeing any kind of a spike, and we really aren’t,” Clark County Health Officer Dr. Eric Yazel said Friday. He added that the county is getting about four or five new positive cases a day, but they’re spread out. “There’s no ‘this is the spot we’re watching’ or anything.”

Hospital stays also have gone down. Statewide, April 9 was the busiest day, with 1,799 people being treated for the virus in hospitals across across Indiana. On June 25, that had gone down to 692. March 31 was the busiest day for admissions with 181 that day; there were 4 on June 21.

As of Friday afternoon, there were just two patients being treated at the New Albany hospital, according to Elizabeth Crouch, director of quality.

But, Yazel said, even as the Southern Indiana numbers are looking better, some spots elsewhere in the state and the country are seeing spikes after the reopening and he can’t identify what this area might be doing different from those areas. While residents have been urged to wear masks and socially distance in public and maintain good hygiene, that’s what many other areas are asking too, and residents don’t always comply.

“The one thing that worries me is I can’t say ‘this is what we’re doing that’s different and how we’re going to be different than everywhere else,’’ he said. “It’s been nice to move forward and if there’s anything we can do to make sure that keeps happening, I want to do it.”

With the reopening plan comes school districts making plans for the fall semester. Greater Clark County Schools announced this week a plan that includes options for families to choose between the traditional in-person education method or two choices for online learning.

Yazel and other health officials have been working closely with the schools to make sure there are proper health and safety measures in place. GCCS students, for example, will have assigned seats, be recommended to wear masks, and have their temperature taken before riding on the school bus.

But, Yazel said, even with the best plans, he anticipates some cases to be identified in the schools.

“Now is it going to be widespread throughout the buildings? Now?” he said. “But I do think a building will have to deal with an exposure issue? Absolutely I do.”

If there are cases within schools in Clark County, the health department will work with school leaders to do contact tracing to minimize any spread.

“If Kid A comes back positive, I want to be able to say ‘OK this is the bus he rides, this is who he sits by,’ “ Yazel said. “Contact tracing is huge in the back to school process.”

• There have been 44 confirmed deaths among Clark County residents.