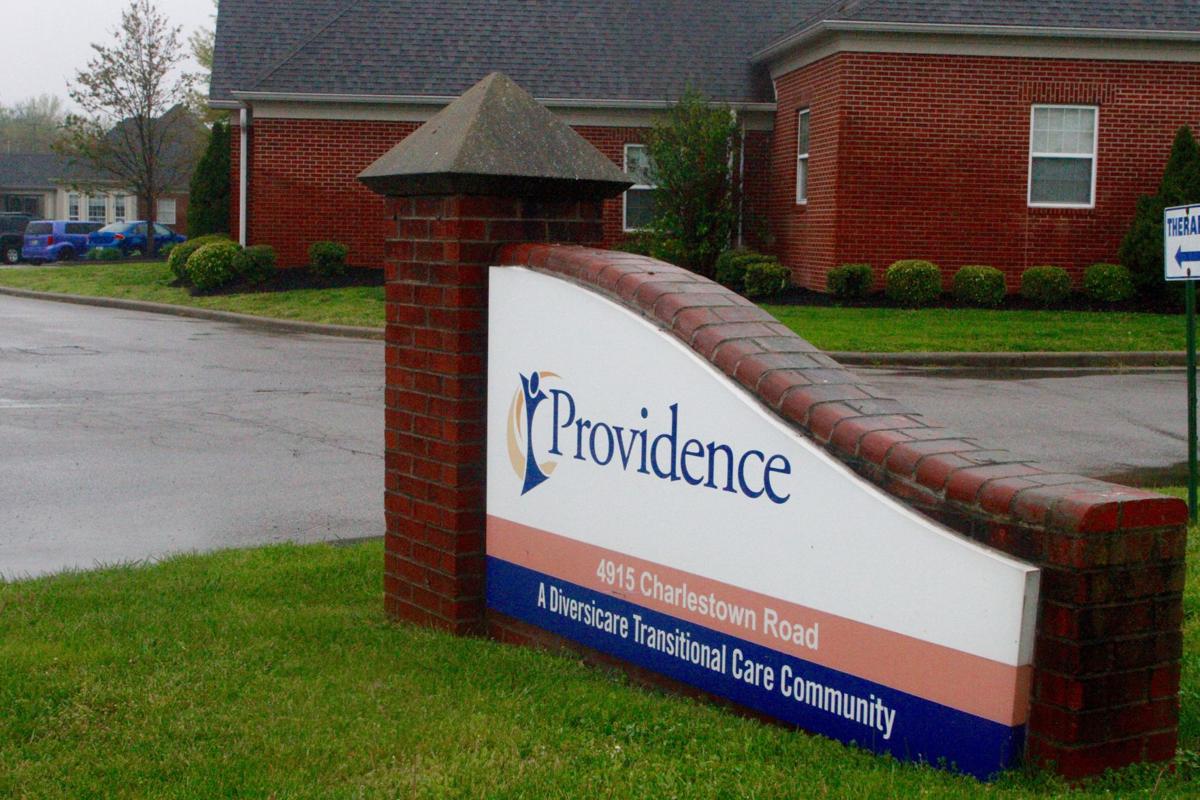 Over 100 COVID-19 cases have been reported by Providence — A Diversicare Transitional Care Community in New Albany. 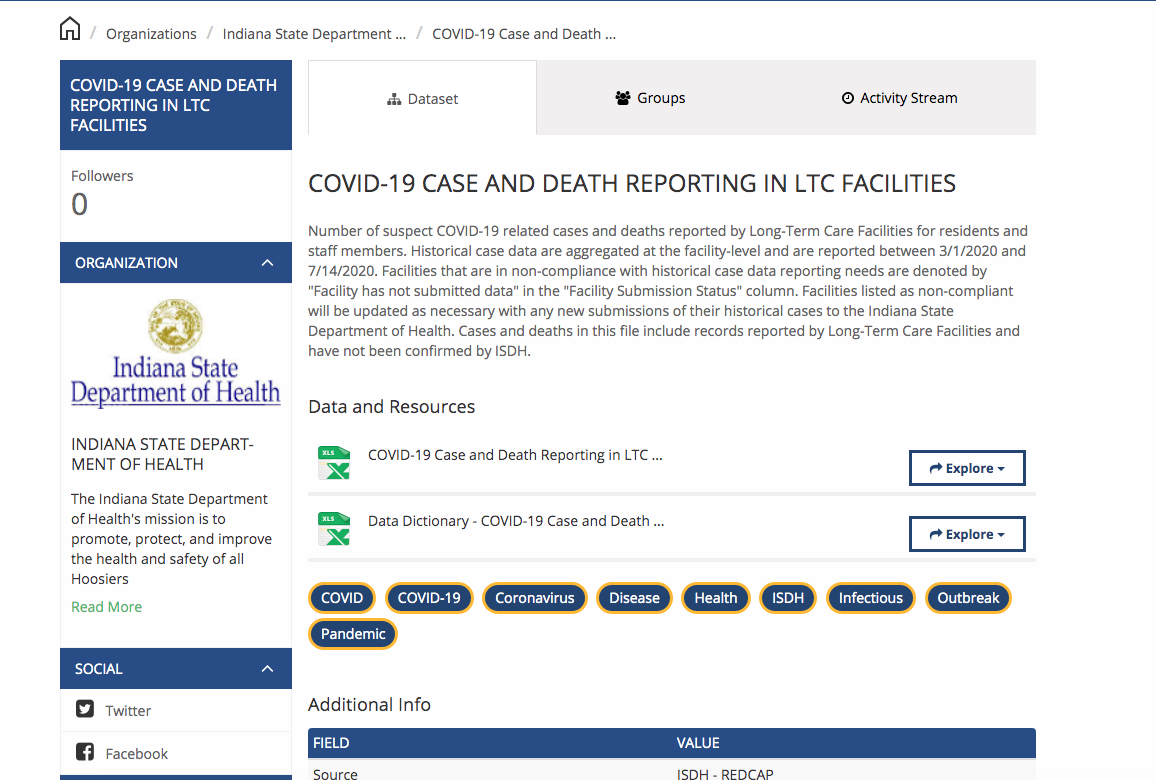 Preliminary data released by the state is available to view on https://hub.mph.in.gov/dataset/covid-19-case-and-death-reporting-in-ltc-facilities

Over 100 COVID-19 cases have been reported by Providence — A Diversicare Transitional Care Community in New Albany.

Preliminary data released by the state is available to view on https://hub.mph.in.gov/dataset/covid-19-case-and-death-reporting-in-ltc-facilities

INDIANAPOLIS — When the Indiana State Department of Health released a preliminary dataset last week documenting COVID-19 in nursing homes and assisted-living facilities, it was the clearest picture so far of the impact of the pandemic on the places where some of the state’s frailest population live.

The data collection started on March 1. A dashboard to provide full information is expected to be released in August.

• Six facilities reported 100 or more cases of COVID-19 among their residents, including Diversicare of Providence, of New Albany, with 104 cases.

• Long-term care facilities accounted for 11% of the state’s cases.

• Of the homes that submitted reports to the health department, a majority of facilities, 378, reported infections among staff, while 248 reported no staff infections. Of the 378 reporting staff infections, 238 reported fewer than five staffers infected with the virus.

Dr. Dan Rusyniak, the chief medical officer of the Family and Social Services Administration, said that 130 facilities hadn’t submitted their data by the July 14 deadline, emphasizing that these facilities may have previously reported some cases but didn’t include cases dating back to the beginning of the pandemic.

Rusyniak said facilities are getting better at reporting and the state is getting better at collecting. He emphasized that numbers have not been purposefully underreported or hidden — some were just not initially reported.

Another factor complicating the process of gathering numbers is that some residents were admitted to facilities to be cared for because they already had COVID-19, which means they did not catch the virus in the facility.

“Many facilities admit patients from a hospital, who were there because they had COVID, and now require a nursing home,” said Rusyniak. “While these cases would count as a positive resident case for that facility, they would not be from spread within that facility.”

Rusyniak said that nursing homes had the discretion to admit COVID-positive patients. Some facilities may not have realized they had that discretion since an April newsletter to facilities from the health department said that facilities were “expected to” accept these residents if they had the capacity.

“We’re pushing for 100% of facilities to submit their data before the release of the public dashboard,” Rusyniak said “This is a mandate and, as such, (facilities) are required to (submit) or will face potential penalties.”

Two of the facilities, Greenwood Healthcare and Wildwood, accepted COVID-positive patients, according to Fred Stratmann, spokesperson and general counsel for CommuniCare, which operates the facilities.

“Greenwood, Wildwood and a number of other CommuniCare centers in Indiana did accept COVID-positive residents from the community. Those known to be positive were immediately placed in our isolation units with other COVID-positive residents,” Stratmann said via email. “Our isolation procedures followed CDC guidelines: double plastic walls, sealed with tape, isolated HVAC systems and full decontamination procedures. We segregated supplies, equipment and staff to prevent cross-contamination.”

Stratmann pointed to the high amount of community spread in Marion County, which some research suggests is the most significant factor for introducing COVID-19 in nursing homes. Those with underlying health conditions, such as those treated at Greenwood Healthcare’s special ventilator unit, are at increased risk, he said.

Greenwood Healthcare’s 31 resident deaths tied for the fifth-highest reported deaths with Diversicare of Providence, in New Albany. They are preceded by Harrison Terrace, of Indianapolis, with 38 deaths; Greenwood Meadows, of Greenwood, with 35 deaths; North Woods Village, of Kokomo, with 33 deaths; and Bethany Pointe Health Campus, of Anderson, with 33 deaths. All of the facilities are nursing homes.

Among assisted-living facilities or continuing-care communities, Kesslerwood Place in Indianapolis reported 14 resident deaths while The Village at Hamilton Pointe in Newburgh had 11.

• Of the 626 facilities that submitted information to the Department of Health, 361, or nearly 58%, reported no resident cases. Forty-two homes, or 7%, reported 50 or more resident cases. Just six homes — less than 1 percent — reported 100 or more. About 21% reported fewer than 10 cases.

The Health & Hospital Corporation of Marion County (HHC) owns at least 89 facilities operated by American Senior Communities, making the government entity the largest nursing home owner in the state. Their facilities account for at least 1,489 resident cases, at least 329 resident deaths and at least 372 staff infections.

The state will share staff cases and deaths for the first time. Staff infections, if facilities don’t take proper infection control measures, can introduce the virus to vulnerable residents and spread quickly in the congregate setting.

Only 12 staffers reportedly died from COVID-19. Because of the low numbers, and the possibility that employees worked at multiple facilities, the state won’t report staff deaths by facility.

Previously, the Centers for Medicare and Medicaid released data for the nation’s 15,500+ nursing homes from May forward but nursing homes reported numerous errors and difficulty correcting mistakes.

Contrary to the national database, Indiana will release cases and deaths from the start of the pandemic for nursing homes and assisted-living facilities.

“The difference in the new numbers from what had previously been reported highlights how important it is to make this information publicly available,” said Sarah Waddle, AARP Indiana’s state director.

“This new data is giving us a better opportunity to provide families with the information they need to make the best decision for their loved ones, learn if outbreaks in facilities mirror what is happening in communities, and better deploy resources like PPE and testing for residents and staff.”

When dashboard will be ready

The interactive dashboard will be available within three weeks, said Dr. Dan Rusyniak, chief medical officer of Indiana’s Family and Social Services Administration. He said future releases could include demographic data, recovery data and visualizations of outbreaks at specific facilities. Data will be updated on Mondays.

To view the preliminary data, go to: https://hub.mph.in.gov/dataset/covid-19-case-and-death-reporting-in-ltc-facilities