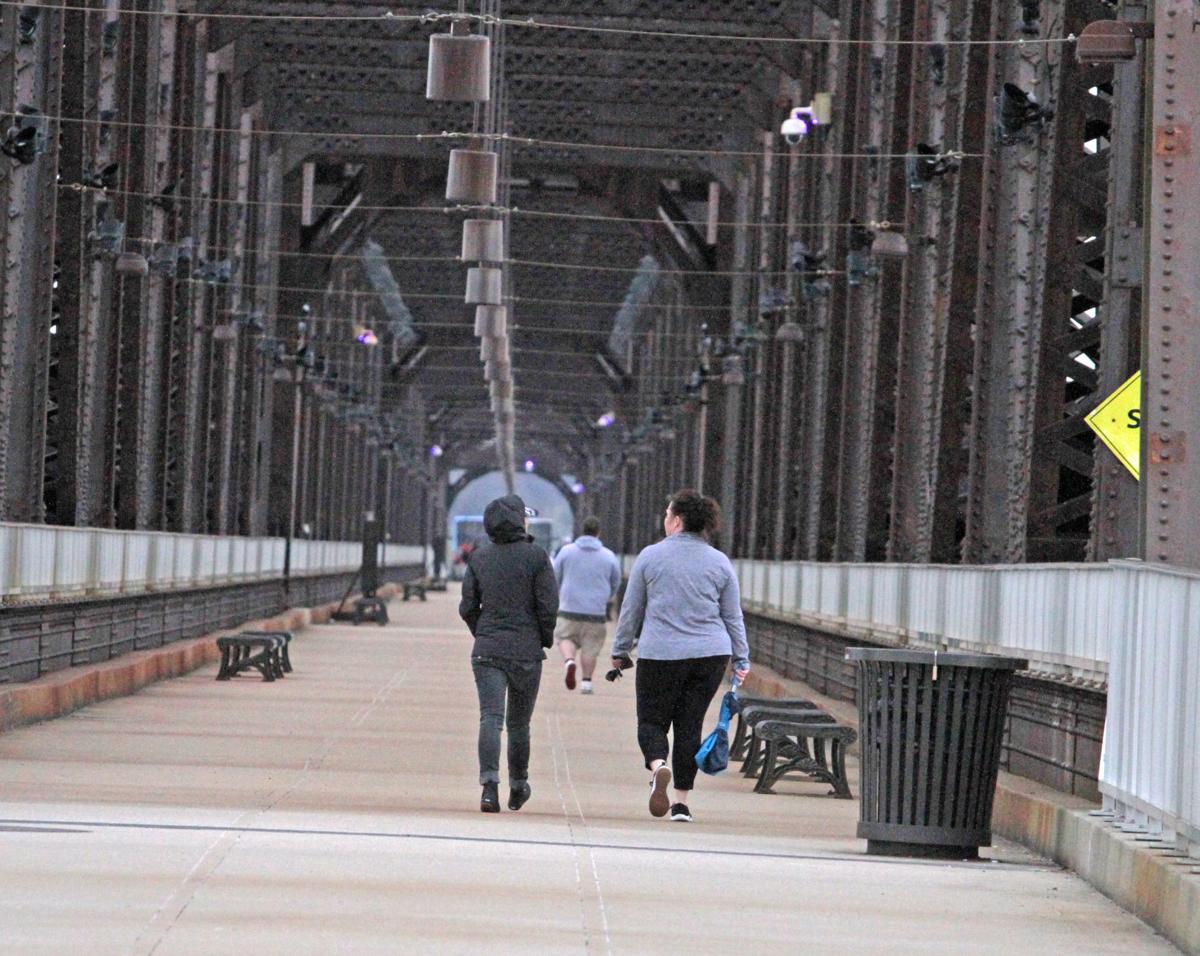 Walkers take to the Big Four Bridge on Friday evening. Despite the stay-at-home order, residents are encouraged to exercise. 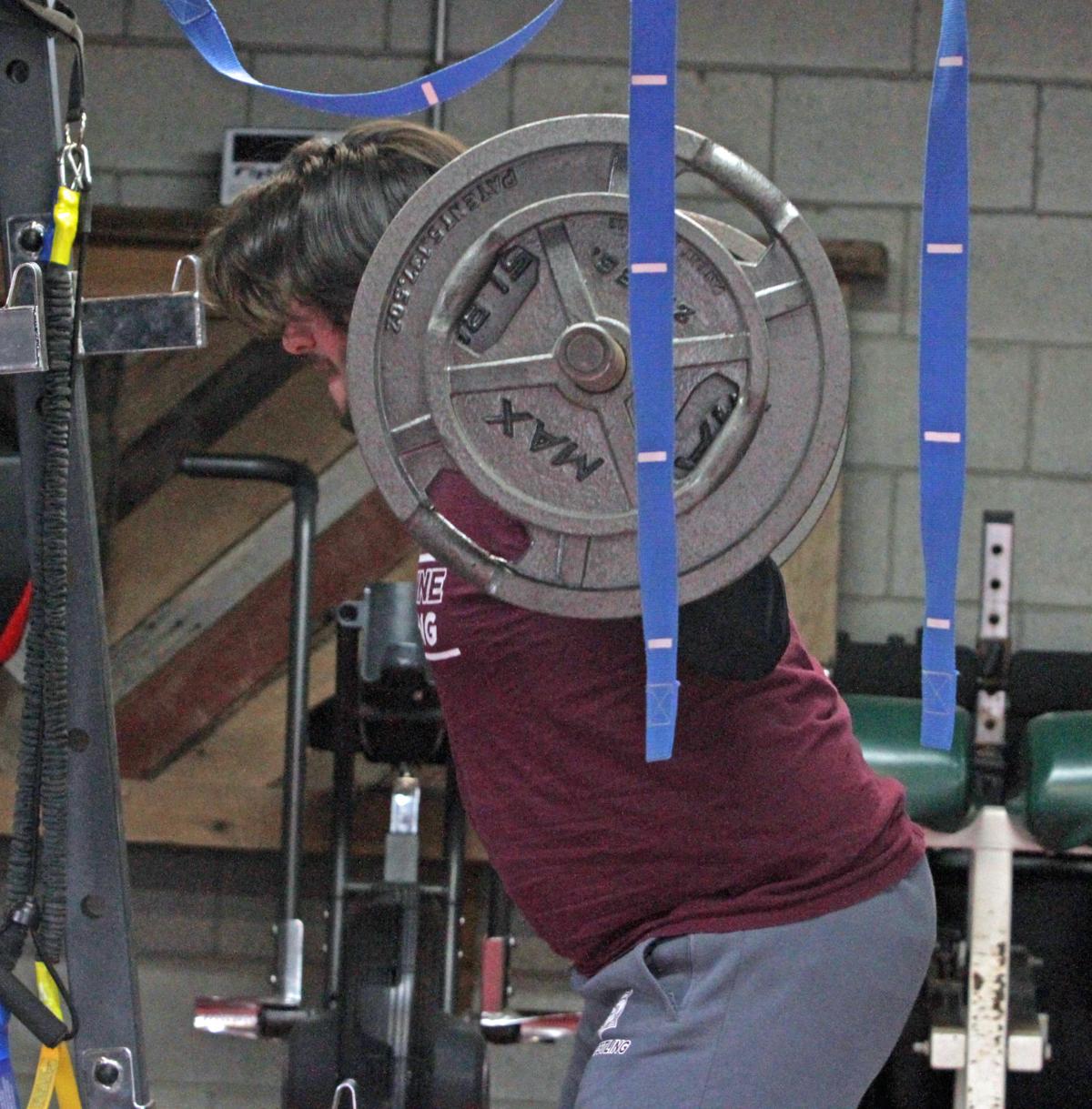 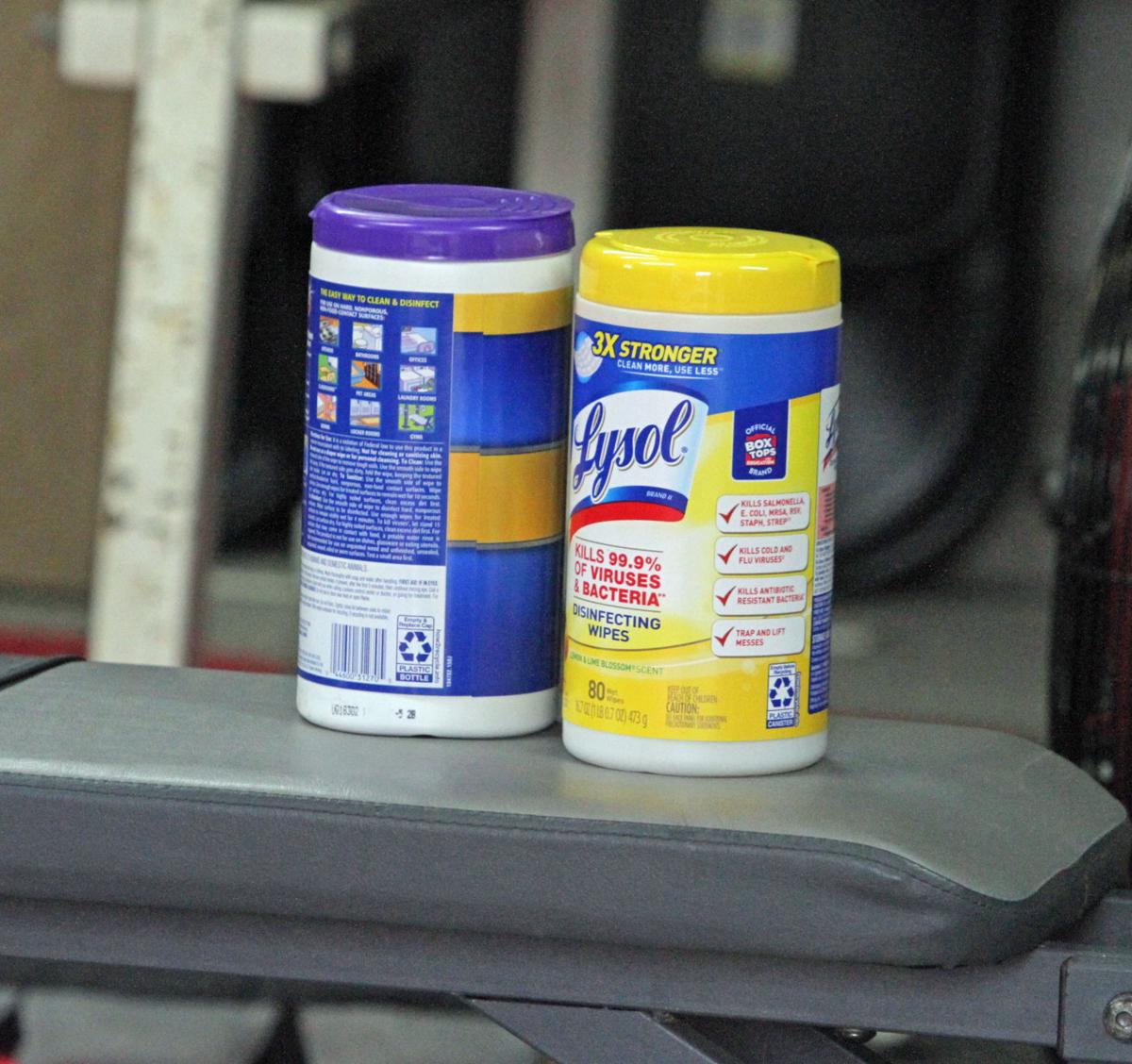 Cleaning supplies are at the ready. 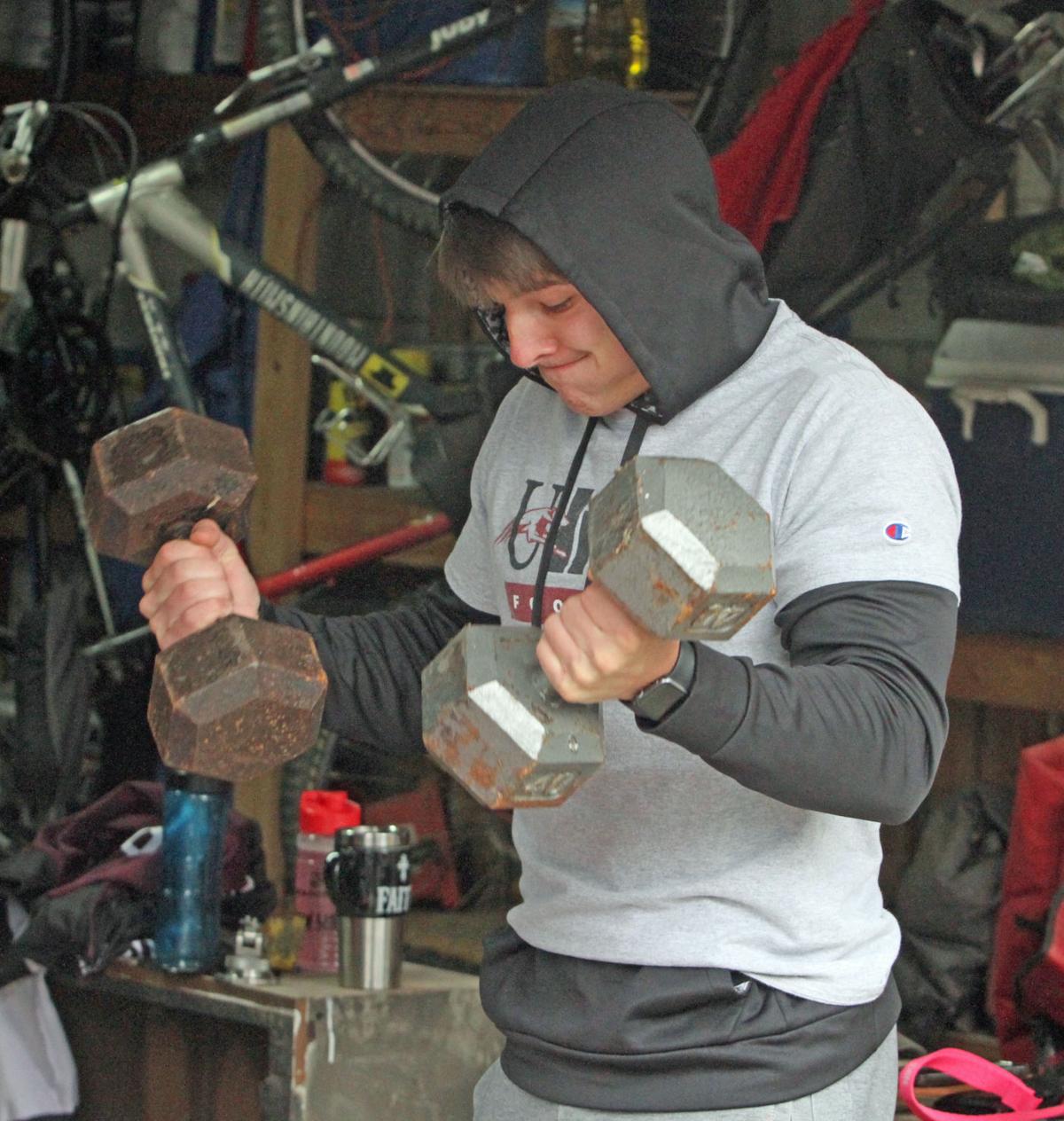 Isaac Hall does some curls during recent workout. 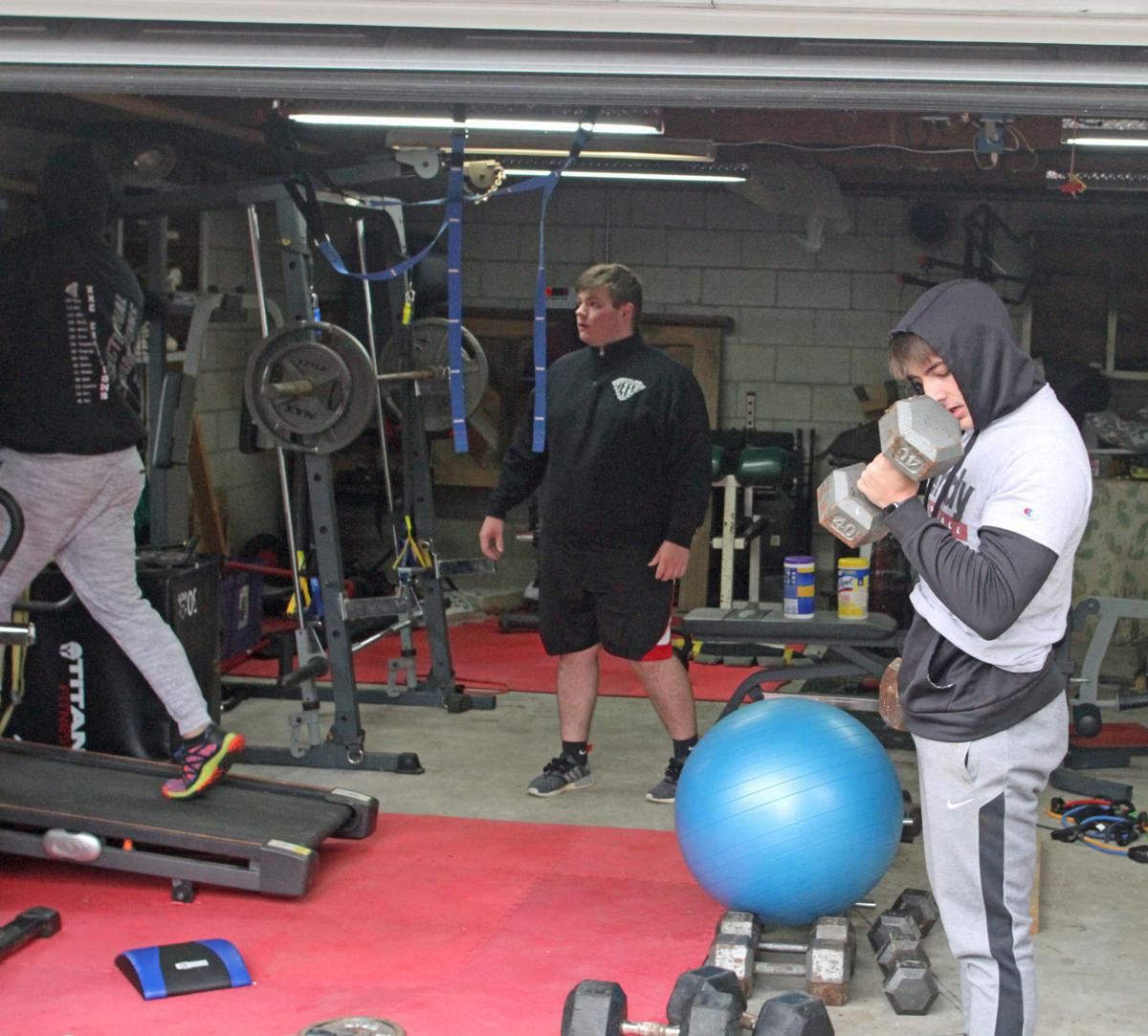 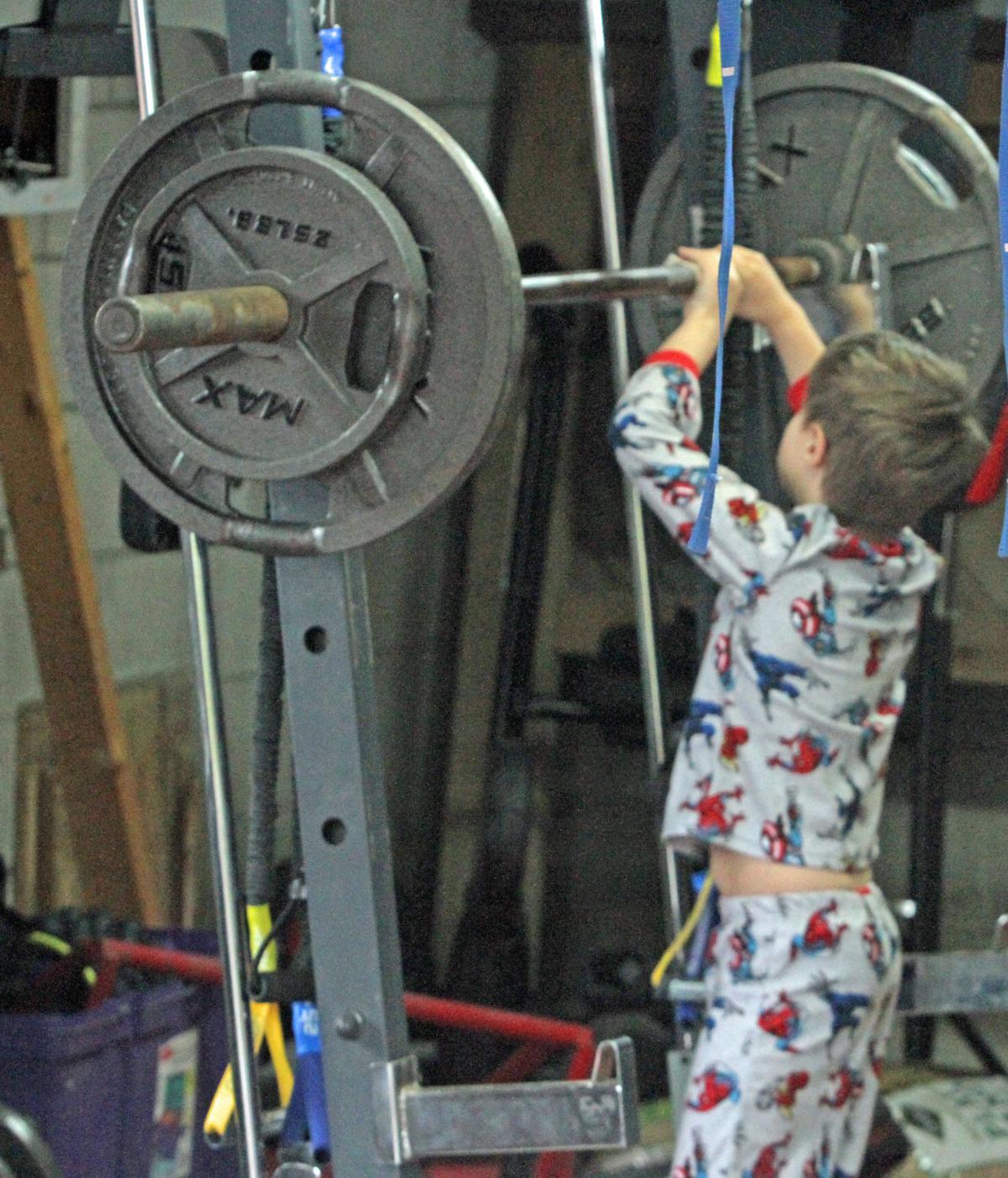 Even 6-year-old Jackson Downey helps out, wiping down some weights. 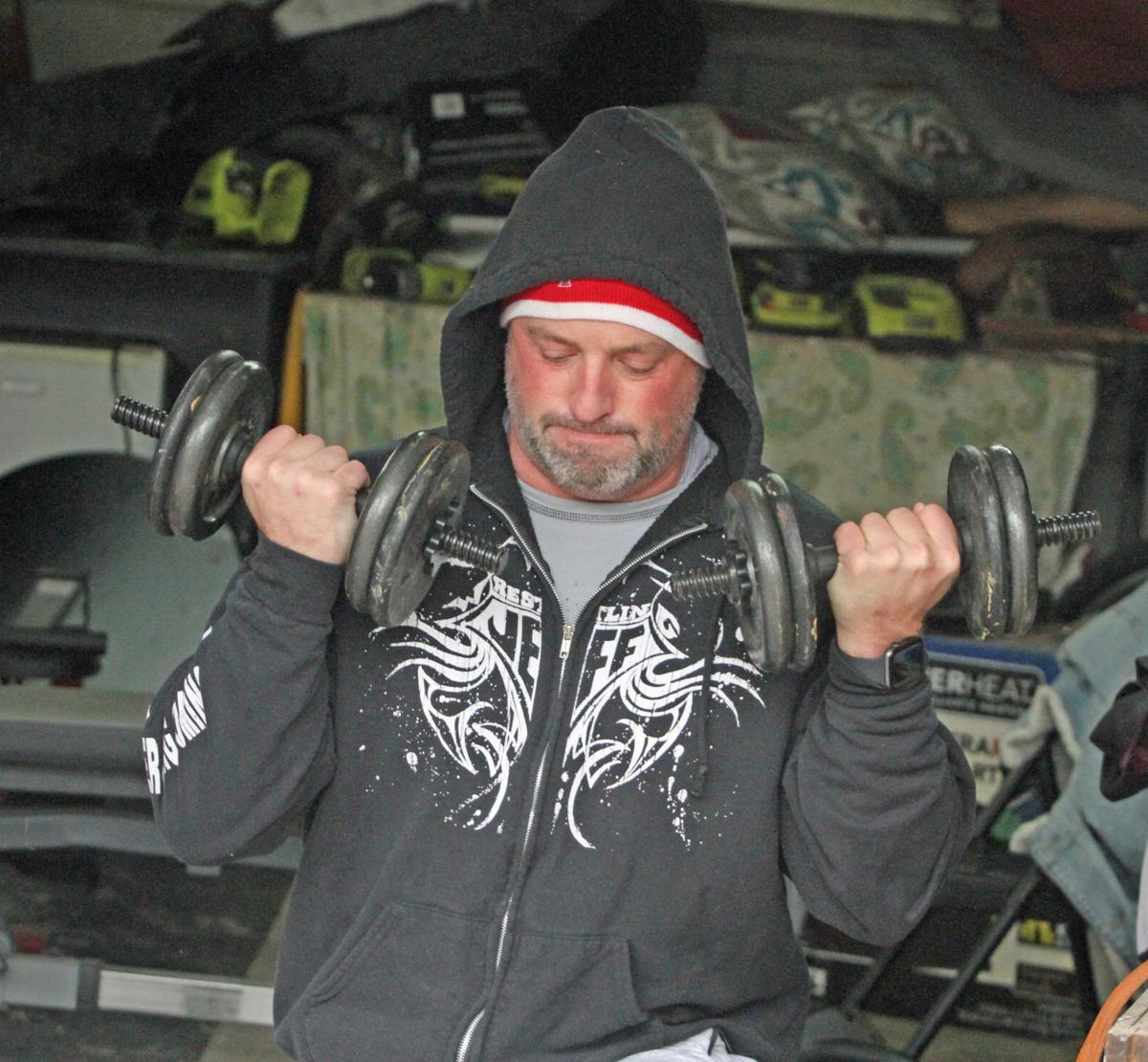 Walkers take to the Big Four Bridge on Friday evening. Despite the stay-at-home order, residents are encouraged to exercise.

Cleaning supplies are at the ready.

Isaac Hall does some curls during recent workout.

Even 6-year-old Jackson Downey helps out, wiping down some weights.

JEFFERSONVILLE — Saturday morning the temperatures were in the upper 30s and lower 40s, yet the garage behind Danny Struck’s house was bustling with activity.

Inside, but with the garage door open, four men were taking turns on a treadmill and stationary bike, lifting weights and doing various other exercises.

“I don’t have anything else to do, I’ve got to stay in shape,” said Jeffersonville’s Josh McCorkle, who is a junior at Bellarmine University and a member of the school’s wrestling team.

“I feel like being trapped in our houses, it’s not really healthy staring at the walls. I’m just trying to stay active during the coronavirus,” Shawn Downey, 21, of Jeffersonville added.

Indeed remaining active is a big problem facing residents of Clark and Floyd counties, as well as those across the country, during the COVID-19 pandemic.

They will become even more difficult over the next couple of weeks after Gov. Eric Holcomb issued a statewide “stay-at-home order” from March 25 until April 7 on Monday.

However, it’s then that staying active and exercising will become even more important, according to Casey Schneider, owner of Outlast Strength and Conditioning in Jeffersonville.

“I think it’s good for stress relief. People are going to be sitting around a lot more, so they’re going to be more inactive while they’re at home,” Schneider said. “Plus exercise is good at building up your immunity, so you aren’t as susceptible to get sick.”

With the YMCAs in Clark and Floyd counties having already announced that they would be closed until at least March 29, more smaller gyms will now be closed too. While some opt to workout at home, on treadmills or with weights for example, there are plenty of opportunities for people to get their workouts online. The YMCA is among those offering free workouts online, while others like Schneider are posting, streaming or programming workouts on social media.

Meanwhile, others are taking their workouts outdoors. Many are taking advantage of area parks, as well as the Big Four Bridge and Big Four Station, for exercise, or just for head-clearing walks or runs.

Back at the garage of Struck, a teacher and wrestling coach at Jeffersonville High School, Saturday’s workout continues. All four men are practicing social distancing and proper hygiene — even Downey’s 6-year-old brother Jackson gets in on the action during a break, wiping down equipment — while also helping motivate each other.

“Working out on your own just kind of stinks anyway, but it’s a team mentality,” McCorkle said. “It’s a lot easier to have somebody to push you to get the last rep, or to add five more pounds, when you’ve got three or four guys with you that you know pretty well.”

For McCorkle and Isaac Hall, a redshirt freshman on the University of Indianapolis football team, these daily workouts are about staying in shape for their respective seasons.

“They canceled all our offseason practices, so I figured I’d come out and get the work in with the guys that are out here instead of trying to get it done on my own,” McCorkle said. “We’re not allowed in any of the facilities on campus. I went and cleaned out my locker a couple days ago and got all my gear.”

“When I go home, if I’m sitting around doing nothing, I do body-weight things — push-ups, sit-ups — anything I can do to keep myself moving,” Hall said. “I’m also working on my meals, meal-prepping and making sure I have the right calories, keeping track of everything going in my body. And, I run two miles every day.”

All of them, though, are just trying to bring some normalcy to their lives in these uncertain times.

“It’s been very crazy actually with the school closing down. But, our classes start next week so the transition’s going to be kind of weird,” Hall said. “We have online video chats with our coaches, we have position meetings. But this, right here, is actually pretty normal. I’ve always been coming to Struck’s, working out with my friends, when school’s closed or something.”

“When your routine changes in a drastic way it’s kind of easy to just let habits slip and say, ‘Oh, this is happening, so I don’t have to do that today.’ Or, ‘I don’t have to do this today,’” added Downey, an assistant wrestling coach at Jeff. “It’s important to keep that routine going and not break your good habits and create bad ones.”

While Schneider said that people have to “be a little more creative and flexible at this time to do workouts they usually don’t do,” she advised that staying physically fit isn’t the only piece of the puzzle.

“I would encourage people who have usually been gym goers, to practice the same health habits with eating and drinking water,” Schneider said.

While Outlast Strength and Conditioning will be closing Tuesday night until April 7, Schneider said that she will be posting, streaming and programming workouts. For more information find her on Facebook at Casey Joy Schneider or by calling 812-972-3563.

While Outlast Strength and Conditioning will be closing Tuesday night until April 7, Schneider said that she will be posting, streaming and programming workouts. For more information find her on Facebook at Casey Joy Schneider or by calling 812-972-3563.