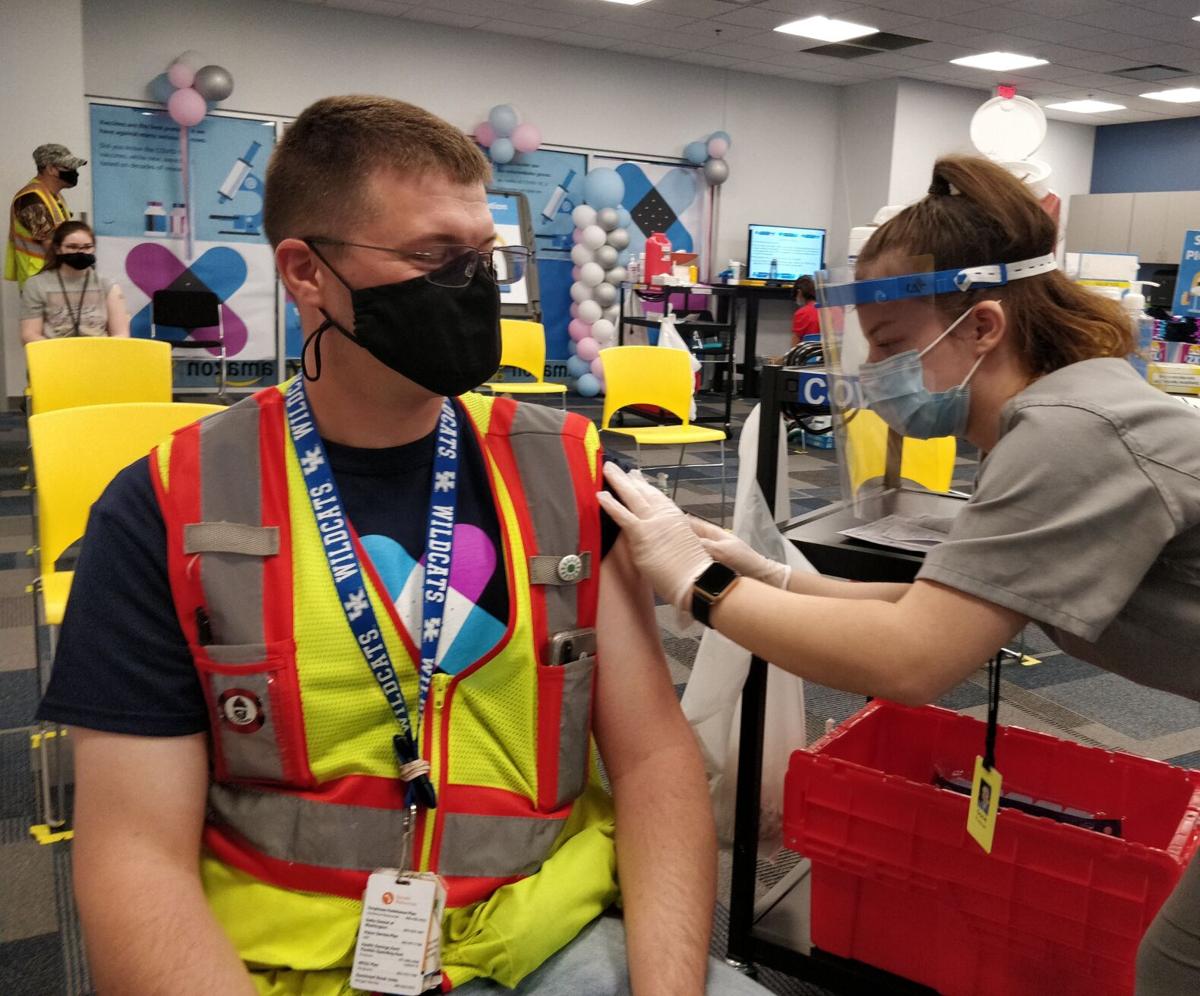 Matt Corum, assistant general manager at Amazon SDF-8 in Jeffersonville, gets his first dose of the COVID-19 Pfizer vaccine during a vaccine clinic hosted by the company in May. Under a federal rule expected to be issued within weeks, staff at companies with 100 or more employees will be required to be vaccinated against COVID-19 or submit to weekly testing. 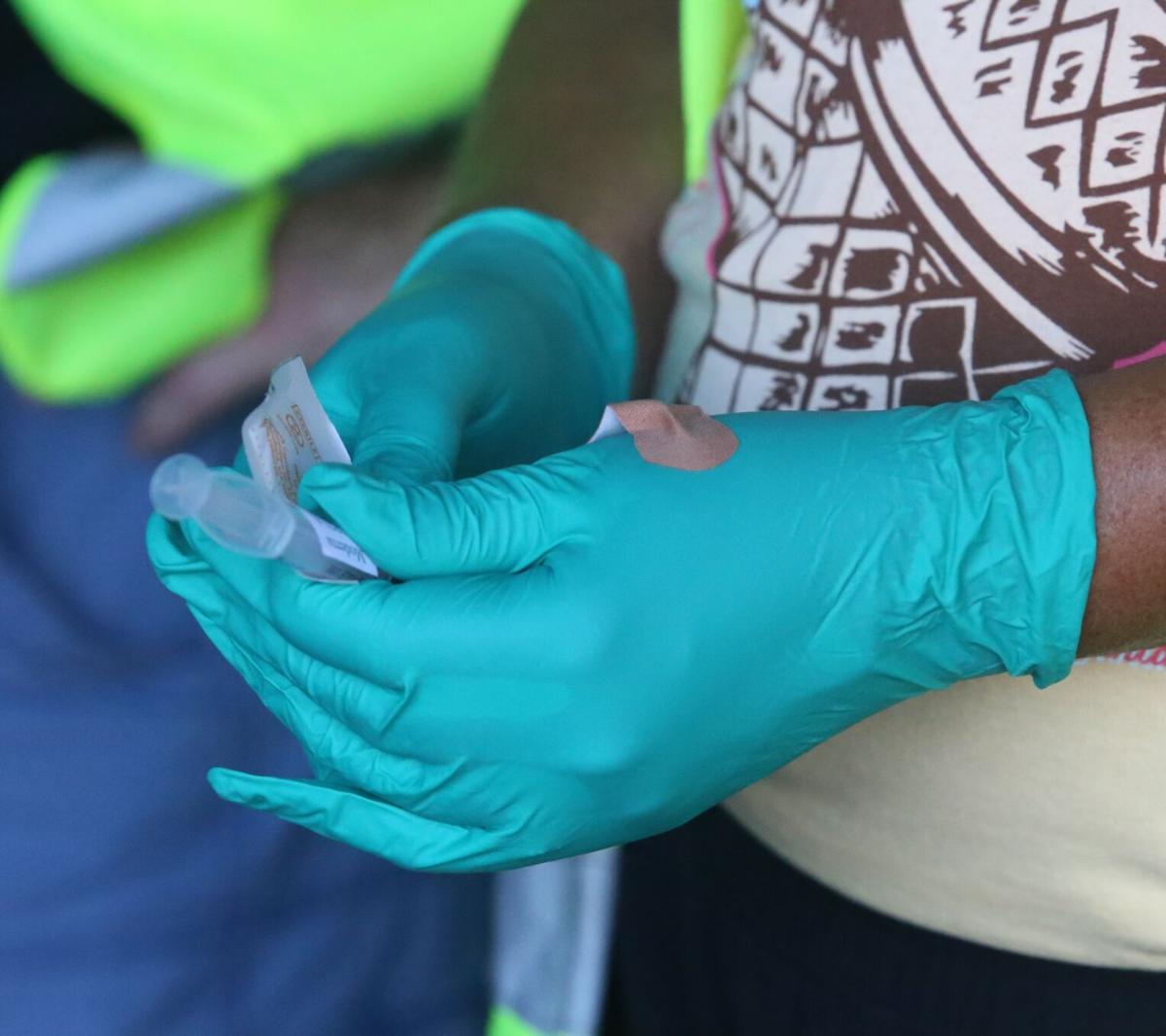 Volunteer Cheryl Weatherholt prepares to administer a shot of a COVID-19 vaccine in a drive-thru clinic in August at Indiana University Southeast.

Matt Corum, assistant general manager at Amazon SDF-8 in Jeffersonville, gets his first dose of the COVID-19 Pfizer vaccine during a vaccine clinic hosted by the company in May. Under a federal rule expected to be issued within weeks, staff at companies with 100 or more employees will be required to be vaccinated against COVID-19 or submit to weekly testing.

Volunteer Cheryl Weatherholt prepares to administer a shot of a COVID-19 vaccine in a drive-thru clinic in August at Indiana University Southeast.

SOUTHERN INDIANA — Although much is still unknown about the vaccine requirements or regular COVID-19 testing announced last week by President Joe Biden, some Southern Indiana companies have started preparing through campaigns targeted at increasing the number of staff now vaccinated.

The requirements, announced by the president Sept. 9 at a news conference and followed by executive orders, mean that most federal employees, government contractors and health care workers will be compelled to get vaccinated against COVID-19.

Biden has also directed the U.S. Department of Labor’s Occupational Safety and Health Administration (OSHA) to draft an emergency temporary standard that would require staff at private companies with 100 or more employees to be vaccinated or submit to weekly testing. Fines of $14,000 per incidence can be issued for noncompliance.

The changes are expected to impact roughly 80 million workers across the U.S., including those who work in manufacturing and large retailers in Southern Indiana.

But ahead of an official ruling, which could come as early as a few weeks from the announcement, some local employers aren’t sure who it will include or how any violations will be enforced.

This includes Clark and Floyd County municipal governments, which both employ more than 100 workers. Rick Fox, attorney for the Floyd County commissioners, said on Tuesday he hadn’t yet received anything from the state or federal government mandating anything to the local government, and said he wasn’t sure if they would be included.

Scott Lewis, who represents the Clark County commissioners, had a similar sentiment saying that local officials were “anxiously awaiting the actual order,” he said. “We’ve heard some conflicting things...we’re not even sure what it’s going to say, whether it’s going to be private companies or include local government; we don’t know.”

“I do think you’re going to see more and more employers mandate it just in response to that,” he said of the pending federal rule.

Over the past few weeks, Yazel said he’s spoken to staff at five or six large employers in the area, at the request of company leadership. In those meetings, he helps provide information on the vaccines and helps answer any questions people may have.

He said this brings a whole new population of workers and community members to the table, who are “obviously going to have a lot of questions because they were concerned enough at least initially to not get [vaccinated,]” he said.

The health officer said the requests started around the time some local hospitals issued vaccine mandates at the start of August. This includes Baptist Health Floyd in New Albany; the hospital system has set a deadline for all staff in all its hospitals to be fully vaccinated by Oct. 31.

Wednesday marked the deadline for Baptist staff who planned to get the Pfizer BioNTech vaccine to either initiate the two-dose series or apply for a medical or religious exemption, according to a statement from Baptist Health. Those who plan to get the two-dose Moderna or one-shot Johnson & Johnson vaccine have more time.

Around 70% of staff across the hospital system had been fully vaccinated when the mandate was announced Aug. 5, and while Baptist Health officials say many more have received the shots since then, those numbers were not yet available Wednesday. They added that they hoped the recent full-FDA approval of Pfizer would make an impact.

“We are hopeful that the FDA’s full approval of the Pfizer vaccine as meeting high standards for safety, effectiveness and manufacturing quality does persuade our remaining staff — and members of the public — to be vaccinated,” a statement from Baptist Health said.

Clark Memorial Health in Jeffersonville is not yet requiring staff vaccinations, but hospital officials said in a statement that they are aware of the federal announcement issued last week.

“We agree that the vaccine is our best defense against this virus and have been strongly encouraging our staff to get vaccinated,” the statement said. “Right now, we are working to understand the details of this development and the impact it will have for employees and providers at our facility.”

Susan Woods, director of recruitment at the Talis Group, who also works with a group of human resources directors at large companies within the River Ridge Commerce Center, said employers have already been campaigning to increase vaccinations. Their efforts have included offering to pay for vaccinations and providing more time off.

”They really have all tried to get everybody vaccinated,” she said. “Because the last thing they want is for somebody to get COVID next to somebody else and they have to shut down the whole department.”

But, she added that the requirements could likely cause a greater strain on companies already stretched thin with staffing. One big issue is the cost of either providing vaccines or the weekly testing for unvaccinated workers.

”The second thing would be how many employees are they going to lose from this? Because right now they’re bleeding,” she said. “A couple of my clients are already 100 to 120 people short in their plants and you just can’t operate like that.”

But there’s already indication that federal and state officials, including those in Indiana, may fight the requirements. Indiana Gov. Eric Holcomb issued a statement last week following Biden’s speech that while he believes vaccines are the best way to protect against COVID, “I strongly believe it’s not the state or federal government’s role to issue a vaccine mandate upon citizens and private businesses.”

”Not only is this a highly inappropriate invasion of what should be a personal decision for every American that threatens to worsen the current labor shortage, but a federal directive impacting tens of millions of Americans warrants review by Congress, the representatives elected by the American people to make the laws,” their statement said.

Indiana Attorney General Todd Rokita also expressed intent to fight the mandate both last week and when his office was reached by email Tuesday.

”We are prepared to protect the rights of Hoosier citizens and business owners through litigation, if necessary, from the excessive federal overreach of the Biden mandate plan,” he said in the statement. “To date, neither the White House, nor any federal or state agency, has issued a single rule or any official guidance for companies and employees to follow. All we have is an announcement from the president that threatens to fine thousands of businesses while simultaneously infringing on the personal freedoms of roughly 80 million Americans. Until a federal or state agency issues a rule, there is no enforcement impact to Hoosiers.”