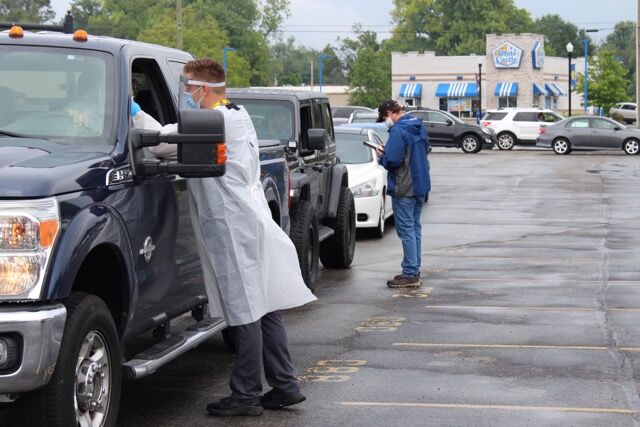 Cars were lined up to 10th Street Monday for the Indiana Department of Health COVID-19 testing and vaccination site at the Mark Fetter Center in Jeffersonville. 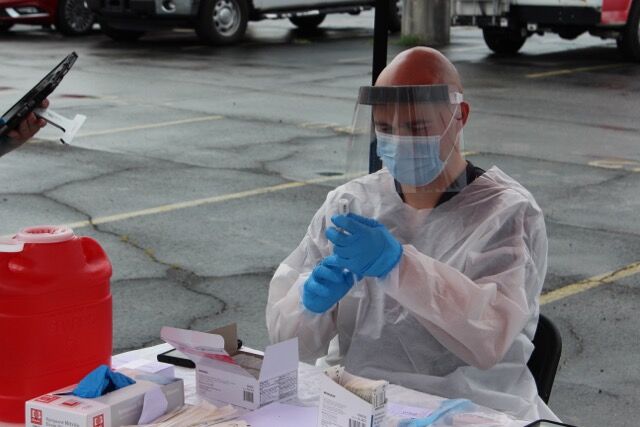 A member of the Indiana National Guard prepares a COVID-19 vaccine Monday at a drive-thru testing and vaccination site at the Mark Fetter Center in Jeffersonville.

Cars were lined up to 10th Street Monday for the Indiana Department of Health COVID-19 testing and vaccination site at the Mark Fetter Center in Jeffersonville.

A member of the Indiana National Guard prepares a COVID-19 vaccine Monday at a drive-thru testing and vaccination site at the Mark Fetter Center in Jeffersonville.

SOUTHERN INDIANA — Local health officials say that while COVID-19 patients are still able to receive care at Southern Indiana hospitals, the rise in cases is putting a strain on a system that was operating at high levels even before the pandemic.

As of Monday morning, there were 18 people hospitalized for COVID-19 at Clark Memorial Health, 10 in ICU, of the hospital’s 21 critical-care beds.

Clark Memorial Health can also care for patients in other areas if there isn’t an ICU bed available, but it may mean a person stays in the emergency room longer waiting for a space to open, said Clark County Health Officer Dr. Eric Yazel, who also works in the ER at Clark Memorial and University of Louisville Health.

Yazel said that in the early part of the pandemic, hospital volumes for non-COVID patients were down around 30%, but have returned to normal high levels just as the Delta COVID variant is sending more to the hospital with COVID.

This is putting a strain because “almost all the ICUs in the area run at capacity essentially all the time,” Yazel said. “...You’re adding 15 to 20 COVID patients a day, and everywhere is packed to the gills.”

He said that even before COVID, there might have been a wait at Clark Memorial or other area hospitals for an ICU bed.

“The problem is when you have a new additional crush to a system like that. When we do, when we get some sick COVID patients, there’s no wiggle room, there’s no empty beds so you have to get creative,” Yazel said.

Cox said that while overall hospitalizations — including COVID patients — has been going up over the past month, there has been a drop in COVID cases seen at Baptist Health Floyd over the past several days.

Martin Padgett, CEO at Clark Memorial Health, said the hospital peaked with nearly 50 COVID patients at a time so far in the first couple of months of the year, but as more people became vaccinated, and before the Delta variant was on the scene, the COVID patient census had dropped to one person.

Hospitals in both Clark and Floyd counties are reporting seeing mostly unvaccinated people of all ages being admitted.

But at Clark Memorial the stays are shorter. Last spring, the average hospital stay was around two weeks, with some staying 30 or 60 days, Yazel said. He said that involved more older people who may have additional health issues, a population that now has the highest vaccination rate. The average stay now is around three or four days.

“So even though we’re seeing some numbers and we’re getting busy, those people are getting in and out,” he said.

Part of this may be due to the biggest unvaccinated population being younger. Those 20 to 29 make up the largest chunk of unvaccinated individuals at the state and local level. But, Padgett said, it is also likely due to earlier detection.

“We’re identifying them earlier now so we can get them started on treatments earlier,” he said. “Early on, [everyone] had limitations on the ability to test because of supply. We don’t have that limitation now; you can get tested at a whole host of places.”

There’s also been an uptick in new tests both in Clark and Floyd counties over the past weeks, health officials previously confirmed. Health department testing sites in both counties have seen a sharp rise, and a drive-thru testing and vaccination site hosted by the Indiana Department of Health Monday at the Mark Fetter Center in Jeffersonville had cars lined up waiting all the way from 10th Street.

To find a testing and/or vaccination location, go to www.coronavirus.in.gov.

• In the Indiana Department of Health Region 9, which includes Clark and Floyd counties, 26.4% of the region's 72 ICU beds were in use for COVID-19, with 15.3% available.

• To find a testing or vaccination site, go to www.coronavirus.in.gov.