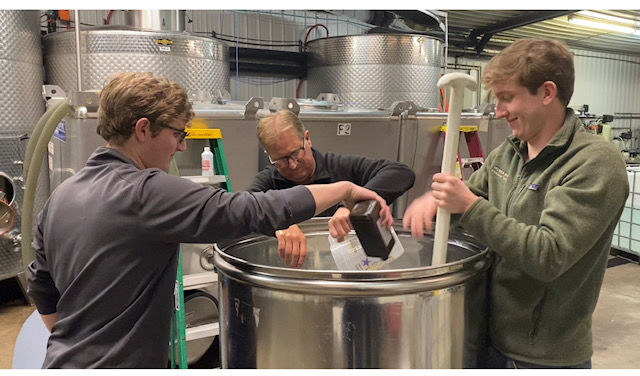 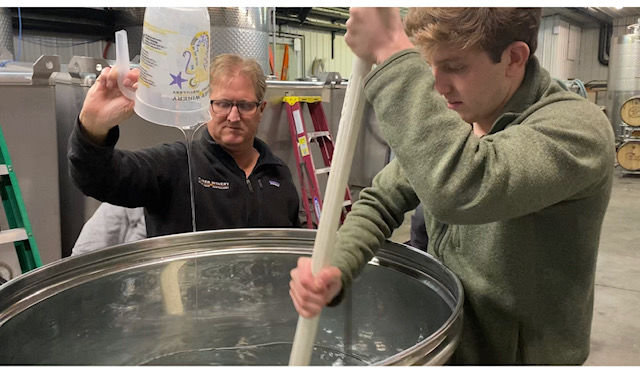 STARLIGHT — Over the past few days, a local distillery has stepped up to provide hundreds of gallons of hand sanitizer to first responders, healthcare agencies and others in the community.

In addition to making craft spirits, Starlight Distillery at Huber’s Orchard & Winery is one of many distilleries across the country turning to hand sanitizer production to help meet the increased demand during the coronavirus pandemic. As of Monday afternoon, the distillery was out of stock and waiting for supplies to continue production, but over the weekend, it made and distributed more than 1,100 gallons of sanitizer using the recipe provided by the World Health Organization.

The craft distillery donated hand sanitizer to more than 400 organizations in just a three-day period, including police departments, fire departments, hospitals, doctor’s offices, nursing homes, manufacturers and daycares. People could bring large one-gallon or five-gallon containers, or they could pick up smaller quantities of 12 or 16 ounces for their own households.

“The community supports us in so many ways, so it was easy for us to do this,” he said.

The word spread quickly, and Starlight Distillery donated the hand sanitizer to organizations both in and outside of the community, including agencies from Evansville and Columbus, Ind. The distillery now needs a replenished supply of hydrogen peroxide in order to resume production, and once it receives the supply, it will continue making the hand sanitizer until it is no longer needed, according to Huber.

Dana Huber, vice president of distribution and public relations at Huber’s, said she initially reached out to One Southern Indiana to discuss donations to members of its Metro Manufacturing Alliance, and it continued to grow from there as the community learned about the hand sanitizer production.

It just made sense for the team at the distillery to use their knowledge and skills to help out in the current situation, she said.

“The community supports us, keeps us in business each and every day,” she said. “Helping organizations and nonprofits do what they need to do in a time of crisis was not even a question in our minds — it was a priority.”

The Clark County Sheriff’s Office was among the agencies to receive a donation of hand sanitizer. Chief Deputy Scottie Maples said the sheriff’s office was grateful to receive the hand sanitizer, and it will be given to inmates before meals at the jail.

“We have great need for it,” he said. “We will be providing it to our inmate population for weeks now, and it will keep risk of [COVID-19] coming to facility down. We’re very, very grateful.”

Lafayette Township Fire Protection District received five gallons of hand sanitizer from Starlight Distillery, according to spokesperson Ryan Houchen. The fire department will not only use it for hands, but also to sanitize equipment, he said.

“It’s great that they reached out and were helping not just local responders but healthcare as well,” he said.