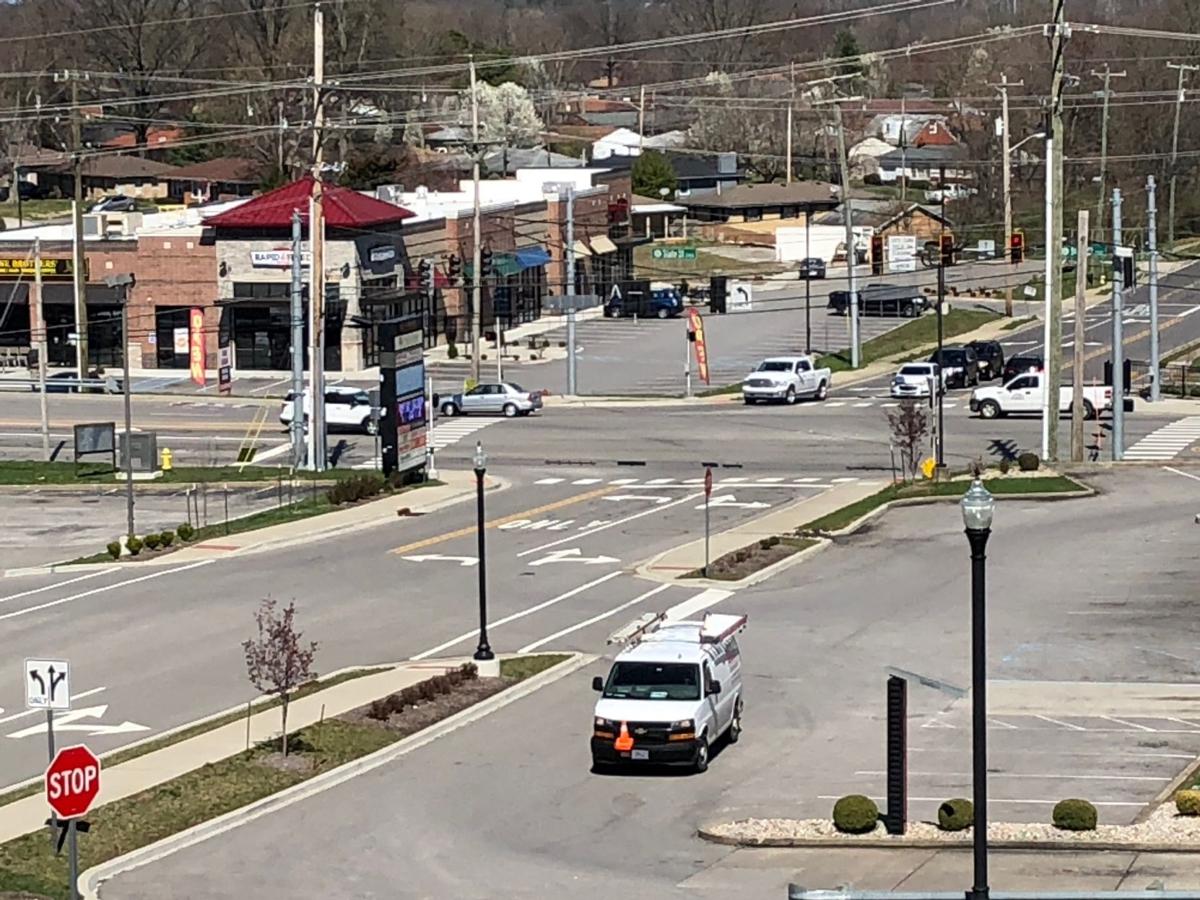 Traffic was noticeably light at one of the busiest intersections in New Albany, State Street and Daisy Lane, Wednesday afternoon. Wednesday marked the first day of the governor’s state-at-home order.

Traffic was noticeably light at one of the busiest intersections in New Albany, State Street and Daisy Lane, Wednesday afternoon. Wednesday marked the first day of the governor’s state-at-home order.

SOUTHERN INDIANA — On Monday, Indiana Gov. Eric Holcomb issued a statewide order for Hoosiers to stay at home for the next two weeks except for essential activities, to help mitigate the spread of COVID-19.

Starting at midnight Wednesday through April 7, residents are ordered to stay within their homes through April 7. People are still allowed to leave their homes for groceries, for medical reasons or to take care of another person who is ill or needs supplies such as groceries, to get their cars fixed and to go to work, if their workplace is listed as an essential business, and to exercise.

All non-essential public-facing businesses are also ordered to close — this includes things such as nail and hair salons, clothing stores which don’t sell groceries and others which don’t provide an essential service.

Daycares, laundromats, car service shops, grocery stores, liquor stores are listed among those deemed essential for the safety and function of society during this public emergency; restaurants can remain open for curbside and delivery service.

But it isn’t as if officers are setting up roadblocks, and they still need probable cause to pull someone over for a traffic stop.

“The guidance from our department is it would have to be an ‘extraordinary situation’ if somebody were to be arrested for something like this,” he said, adding that if officers observe a blatant disregard for the mandate, they will address it. “What we’re doing right now is just business as usual and educating people.”

Still he urged people to observe the mandate and heed the words of local and state health officials. As of Wednesday, there were seven confirmed cases of the disease caused by the novel coronavirus in Clark County, six in Floyd. Statewide, the Indiana State Department of Health reported that as of 11:59 p.m. Tuesday, there had been 477 cases confirmed in more than half of the state’s 92 counties, with 14 deaths.

Huls said what’s more likely to happen during the mandate is that residents might observe something like a business not deemed essential which remains open during the temporary mandate, and report it to police.

“Then we may basically educate them and say ‘hey here’s the number to call to make sure you are listed as one of the necessary businesses that can stay open,’” he said. “But we don’t foresee that.”

And people can still enjoy a bit of the outdoors, such as going on a park trail or riding a bike, provided they practice social distancing with others. But local parks facilities such as restrooms and shelters are closed, and Huls said kids shouldn’t be allowed to play on playgrounds.

“We advise staying away from the playground because it could be an easy place [to spread germs],” he said.

Clark County health officials confirmed one more case of COVID-19, bringing the total as of Wednesday morning to seven.

While Clark County Health Officer Eric Yazel reported that at least five of those cases had been in contact with a known positive, including a woman who works at Humana in Louisville where a man was confirmed positive there, two of the newer cases don't yet have an obvious source of contact and could point to community spread of the virus.

But he said if that does turn out to be the case, it doesn't change what officials were already preparing for.

“This isn't a surprise, its [been] more of a when, not an if, kind of scenario," Yazel said. "And really it doesn't change the guidelines or recommendations...sneezing into your elbow and wash your hands and don't touch your face, stay home."

He said the new cases, if they do point to a community spread, are not cause for panic but just underscore the need to stay home and practice social distancing, and self-quarantine if not feeling well.

"Just take all of these things we're telling you seriously," he said. "We're doing these for a reason and we're doing them based on real data. This isn't a panic response, this is 'OK it's here, it's out in the community, how do we need to protect people' kind of response?”

The Floyd County Health Department reported that as of 1 p.m. Wednesday, there were still six cases in Floyd County, with no new cases from the previous day at that time.

The Indiana State Department of health reported 477 confirmed cases in more than half the counties in the state as of 11:59 p.m. Tuesday, which does not include the newest Clark County case.

Overall, the ISDH reports 3,356 people who have been tested in Indiana, with 14 deaths.

The Centers for Disease Control and Prevention (CDC) reported that as of 4 p.m. Tuesday, there were 54,453 cases detected in the U.S., up just over 10,000 from the previous day. There have been 737 deaths, almost 200 more than the previous day's total.

• More information on the stay-at-home order can be found at www.in.gov/gov/.