49 Hoosiers have died from COVID-19 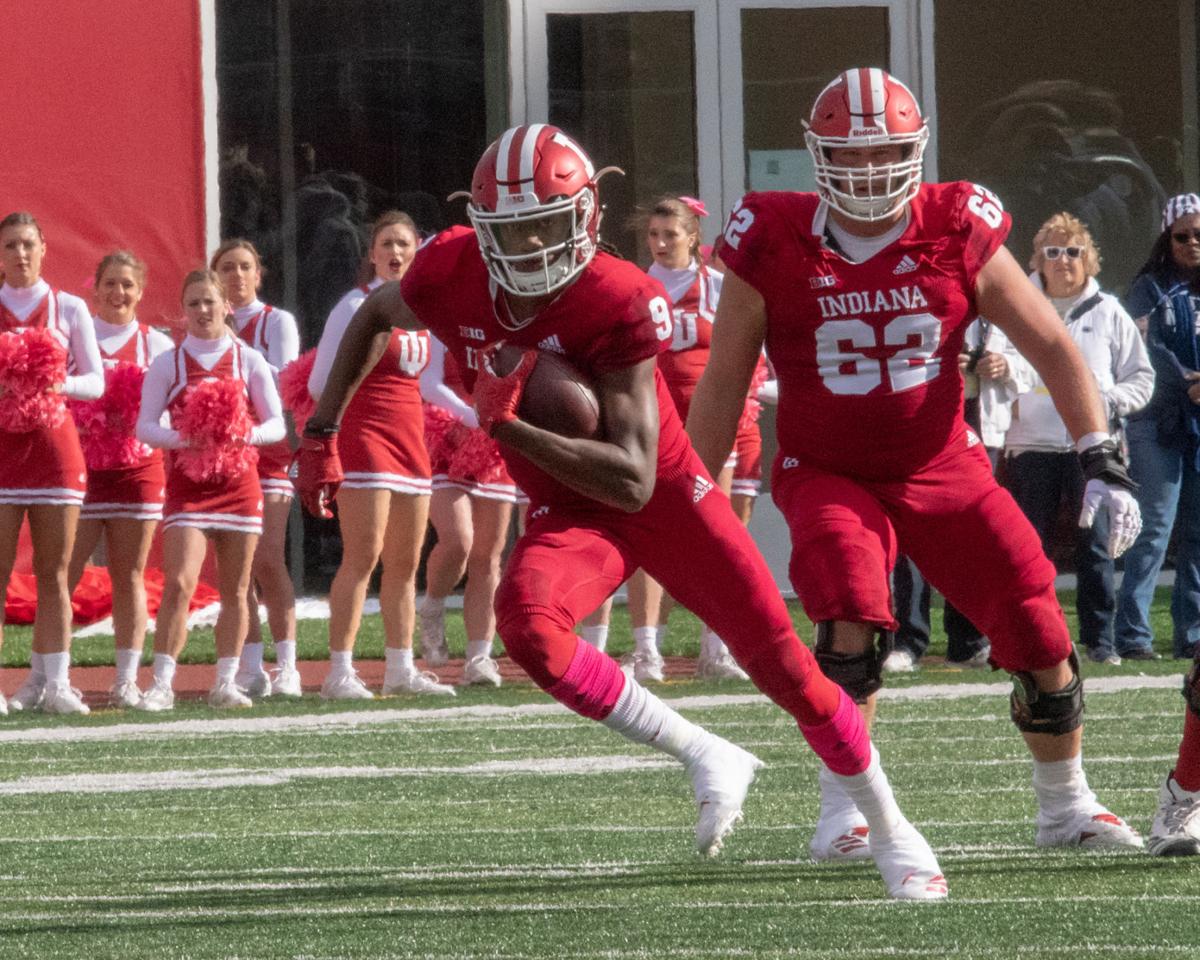 Indiana quarterback Michael Penix Jr. looks for running room during the first half of a 2018 game against Penn State at Memorial Stadium.

Indiana quarterback Michael Penix Jr. looks for running room during the first half of a 2018 game against Penn State at Memorial Stadium.

BLOOMINGTON — Indiana redshirt sophomore quarterback Michael Penix Jr. was ready for an important spring, one that would continue to establish him as the unquestioned leader of IU’s offense.

The goal for Penix when IU football resumes will be to show he can last a full season. That’s why he put on more than 15 pounds of muscle on his 6-foot-3 frame. At 218 pounds, Penix feels more confident handling the hits that come in playing a full Big Ten conference season. Last season, Penix played at between 200 and 205 pounds.

“We talked about 220, so I hit that pretty quick,” Penix said. “But just wherever is comfortable and whatever is going to help the team, and as long as I still feel like I can move, I feel good.”

Last year at this time, Penix was recovering from a torn ACL and was part of a three-way quarterback competition with incumbent starter Peyton Ramsey and Utah transfer Jack Tuttle. Penix won the quarterback competition out of fall camp and in six starts last season showed he was more than capable of sparking the offense. Twice last season, Penix was named Big Ten freshman of the week, when he passed for 326 yards in IU’s season opener at Ball State and when he completed 20 straight passes and passed for 286 yards at Michigan State.

Overall, Penix completed 110 of 160 attempts for 1,394 yards with 10 touchdowns and four interceptions, while adding 118 yards rushing on 5.4 yards per carry and two rushing TDs. The 68.8 percent completion mark set an IU record and ranked sixth in Big Ten history. But Penix dealt with various injuries during the course of the season that was cut short Nov. 2 when he suffered a broken joint in his collarbone against Northwestern.

As an occasional scrambler, Penix is mindful of the contact he takes in the open field.

“I wouldn’t say I was evaluating it, but with the trainers, they always talked about, like, just making sure I protect myself as much as possible,” Penix said. “I don’t really look back on those times. I always try to keep my head forward and just work on what I can do next to help the team and just coming back and just gaining weight and just working hard every single day to try to get back to where I need to be. That’s all I’ve been focusing on.”

Another adjustment Penix will need to make is to a new offensive coordinator, Nick Sheridan, though the transition should not be dramatic. Sheridan was elevated from tight ends coach, and the terminology and concepts of the offense will remain similar to that which Kalen DeBoer ran last season before leaving to take over the head coaching job at Fresno State. Sheridan was IU’s quarterbacks coach when Penix was a true freshman and worked with him closely.

“The whole team, the whole offense is excited,” Penix said. “He’s a great guy. He’s always — even last year, he was with the tight ends, but he always was involved with all the other positions.”

Penix began throwing again in mid-January. He spent that time working on timing with returning veteran receivers Whop Philyor, Ty Fryfogle and Miles Marshall. He said redshirt freshman receiver Jordan Jakes has shown promise with his work ethic, and Jacolby Hewitt had made progress coming back from a torn ACL that sidelined him last season.

“He’s coming back, and he’s working hard, as well, and he’s just making sure that he just puts in all the work,” Penix said. “I’m one person that he talks to a lot, especially with the injury because we had the same injury. So he’s always just asking me have I ever felt this way? Have I ever felt this way? So I always try to keep him level-headed and keep him positive and make sure that he’s looking forward.”

IU football coach Tom Allen said the confidence Penix gained from his performances last season has made him more comfortable being a leader on and off the field. Allen appointed Penix as part of IU’s leadership council during the offseason.

“He and I have met and others have met and just to help him grow and develop and just take on that role of being — hey, this is your football team,” Allen said. “You’re the starting quarterback of the Indiana Hoosiers in the Big Ten and a great opportunity and responsibility that he has.”

Penix is eager to tackle that challenge as a leader. But that begins by staying on the field, and Penix is determined to make it through a full season healthy.

“I’m working hard every single day in the weight room and in rehab, just making sure that my body is healthy, and that’s something that I don’t look at,” Penix said. “When I play, I just play to have fun and play for my brothers and just go out and compete. I don’t think about injuries. I don’t think about the past. I just want to go out there and have fun and get wins, and that’s what it’s all about.”

Linda Darleen Gordon, 74, passed away peacefully on Friday, March 27, 2020 at Autumn Woods Health Campus in New Albany, Indiana. She was born on June 1, 1945 to the late Leroy and Dora Hobbs (Bailey) in Sanford Florida. Linda worked at the Bales Motor Company for over 20 years where she was …