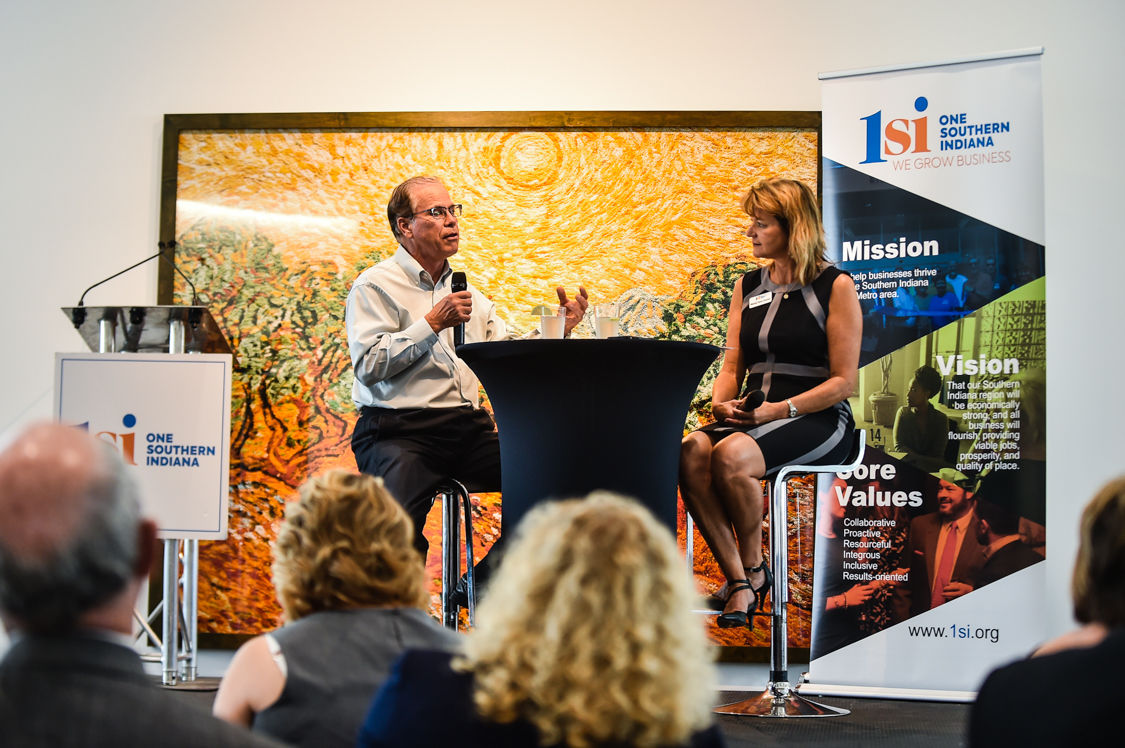 U.S. Sen. Mike Braun discusses the importance of transportation in Southern Indiana in attracting companies for future growth within our region while talking with 1Si President Wendy Dant-Chesser at America Place. 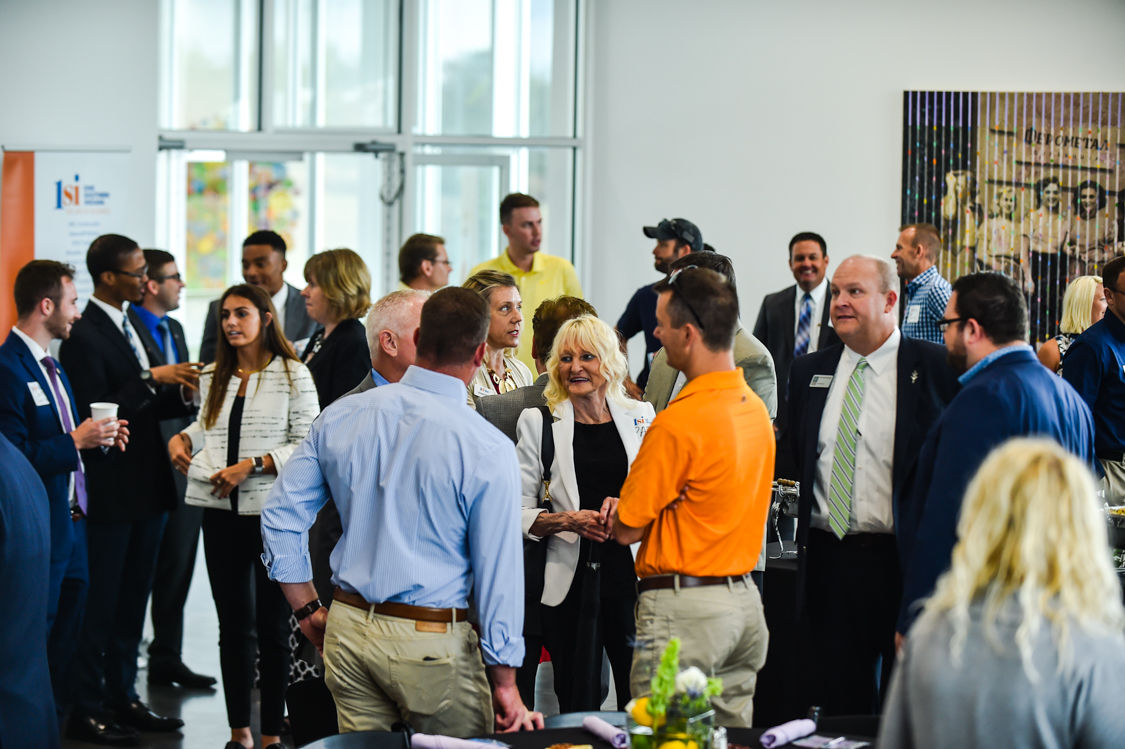 Attendees of Monday's One Southern Indiana luncheon and fire-side chat mingle before finding their tables in the Gallery Building at America Place in Jeffersonville. 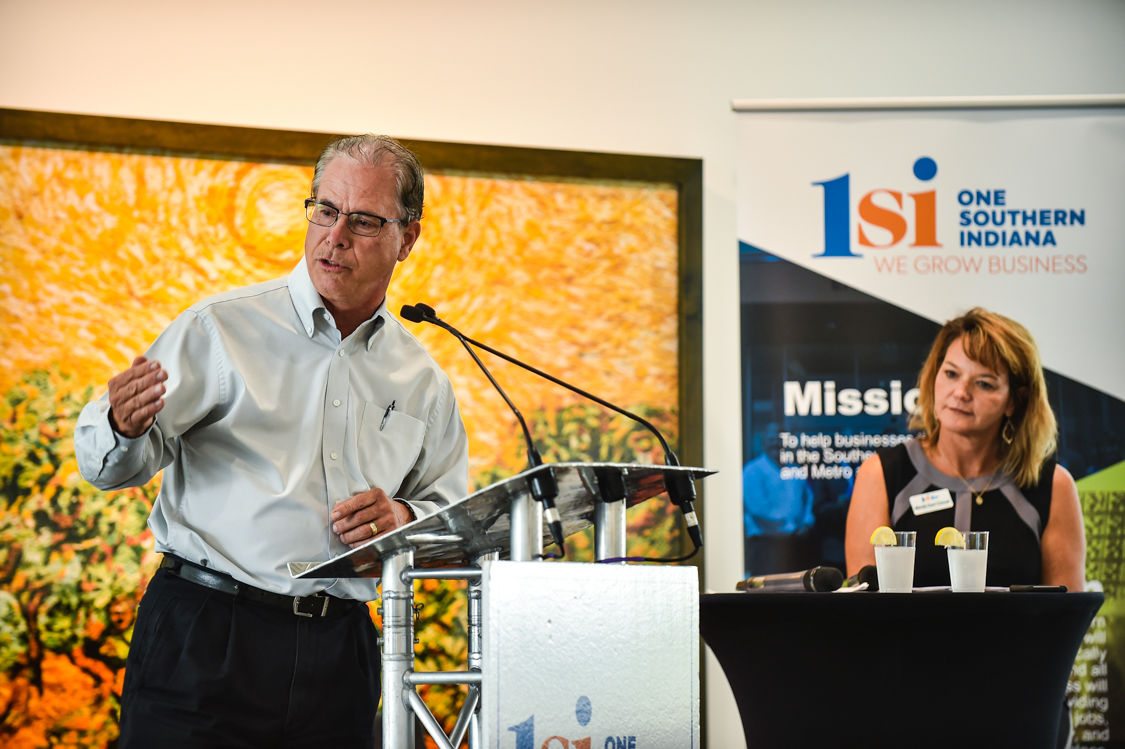 U.S. Sen. Mike Braun talks of his time spent between Washington D.C. and hometown Jasper after taking the stage on Monday afternoon to begin the One Southern Indiana fire-side chat. 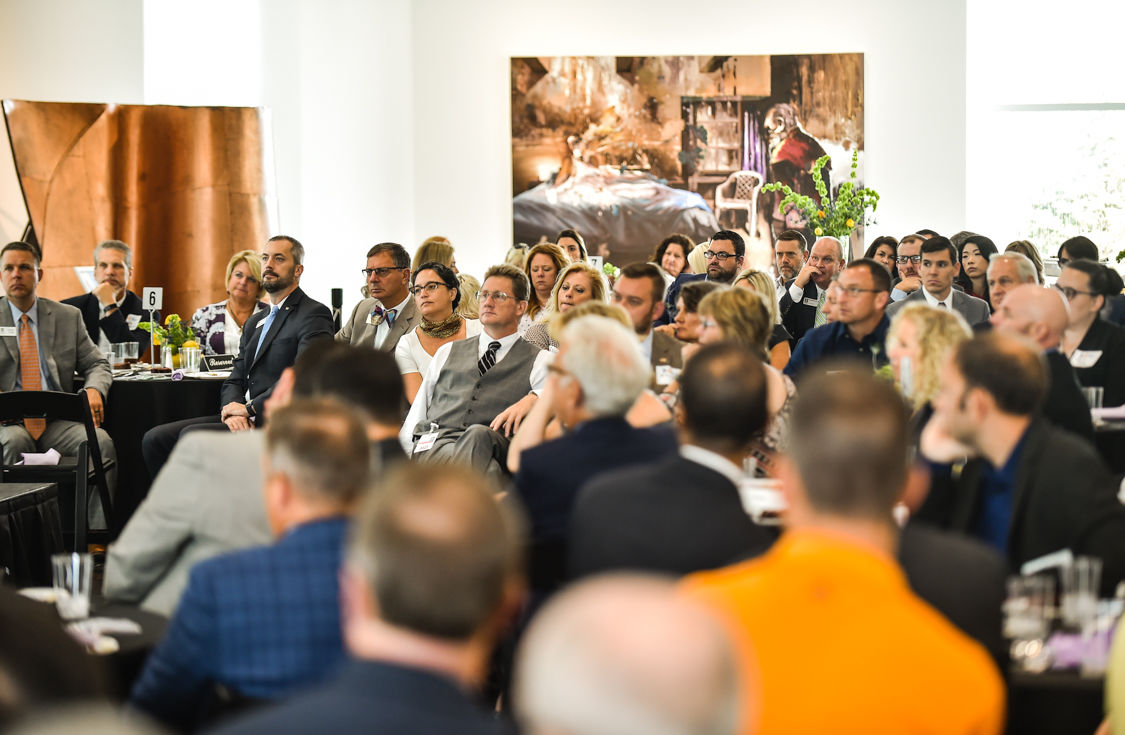 Attendees of Monday's One Southern Indiana luncheon and fire-side chat mingle before finding their tables in the Gallery Building at America Place in Jeffersonville.

U.S. Sen. Mike Braun talks of his time spent between Washington D.C. and hometown Jasper after taking the stage on Monday afternoon to begin the One Southern Indiana fire-side chat.

JEFFERSONVILLE – Equipped with two copies of the News and Tribune and a TIME magazine, Wendy Dant Chesser, president and CEO of One Southern Indiana, sat across from Sen. Mike Braun [R-Indiana], ready to ask him the tough questions on issues facing businesses in Southern Indiana, such as economic development, tariffs, climate change and more.

The 1si member luncheon and "fireside chat," as it was dubbed, with Braun was strategically scheduled at America Place, in River Ridge, on Monday afternoon. Chesser said the location was picked to show Braun first-hand all the development and activity happening in the area.

Questions weren't revealed prior to the event and Braun answered each, live on the spot.

"He didn't talk from notes. He didn't ask for any questions in advance. We truly had a discussion about what I and, I think, One Southern Indiana members wanted to hear from our U.S. Senator," Chesser said.

One of the first questions Braun answered was about finding enough skilled workers to fill the available jobs. He talked about his business in Jasper, and his struggle to find workers.

"When [the Jasper area's] four school districts were stigmatizing, because they weren't guiding students and parents properly, that the only successful route in life was to get a 4-year degree. Never would I encourage anybody not strive for it, but when 60 percent of those that pursue it don't hit the finish line and none of the jobs – the 80,000 that can't be filled in Indiana – need one, common sense needs to start taking over," Braun told the crowd of 1si members. " ... The state is responding and I think we are finally addressing it."

He said he wants to keep it simple by having a sheet for parents and students that outlines what jobs are out there now, what the starting pay and career pay is and list out the cost of education for attaining those jobs.

Chesser showed an article in the News and Tribune talking about a recent climate strike, in Jeffersonville. She asked his thoughts on the growing issue.

"I believe when you pump carbon in the air, it has a greenhouse effect ... The question is, what are you going to do about it?" Braun asked rhetorically. "I think it's got to be a balanced conversation."

Braun said part of balancing that conversation is involving China, who he said emits more pollutants than the U.S.

Asked about tariffs on China's products, Braun said his top objective would be to stop tariffs completely, but felt they are needed in this case. He said China is seeking to grow economically, which will make them more powerful globally.

"Do you think it'll be easier to deal with [China] and mediate when they are our size and the answer is no," Braun said.

He doesn't foresee an ending coming up quickly.

"Will it end? Only if their economy starts to wobble and I think they have more patience than we have," he said.

Andrew Takami, director of Purdue Polytechnic in New Albany, said he agrees with much of Braun's views on higher education.

"Indiana is in the middle of the Midwest, so manufacturing is obviously very important," Takami said. "We are also focused on workforce development, because we know there are a great [number] of companies that need to be hiring our applied engineers, but also need to be hiring people at all different [skill] levels ... We are working to be uniquely situated in workforce development to meet the needs that companies have here or there, because it's about helping people be the best versions of themselves."

Doug Drake, president and CEO of Personal Counseling Service, said the only thing that surprised him about Braun's message was the tone.

"I was surprised by how authentic he is and how his message has been very consistent [when talking to various groups]," Drake said. "He's not the stereotypical politician, which is refreshing to me ... [Our country] was never meant for career politicians. It was meant for people that come from the same roots that we do and they move up the ranks and they are able to lead from a perspective that they've been there and done that."

Chesser said this event is the first of a four-part advocacy series.

"1si members want access to decision makers. We can help provide that," Chesser said. "As we gauge the positions that our advocacy council takes on these issues, we need some of that background. We need to know what's actually happening in our nation's capital and our state capital so that we know where to engage."