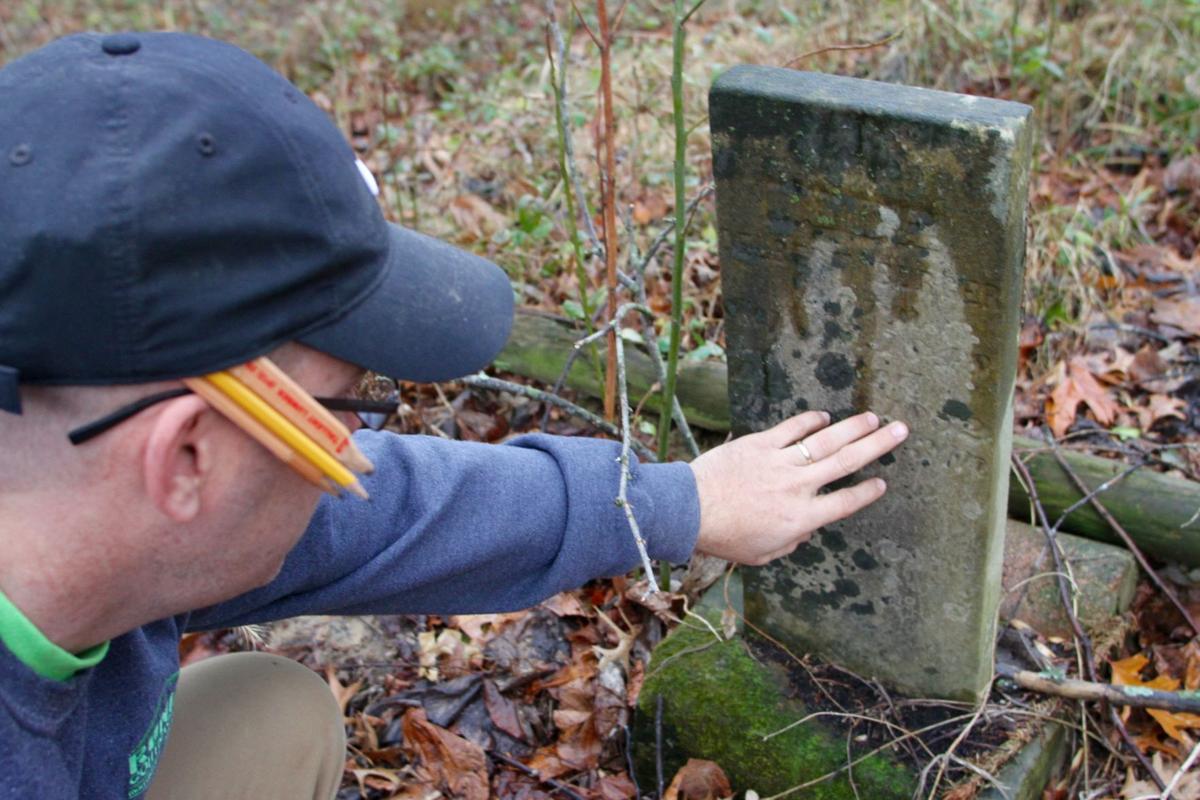 Georgetown Township Trustee Dee Roney has become responsible for two abandoned cemeteries in the last six months, and he expects more to be discovered in the future. 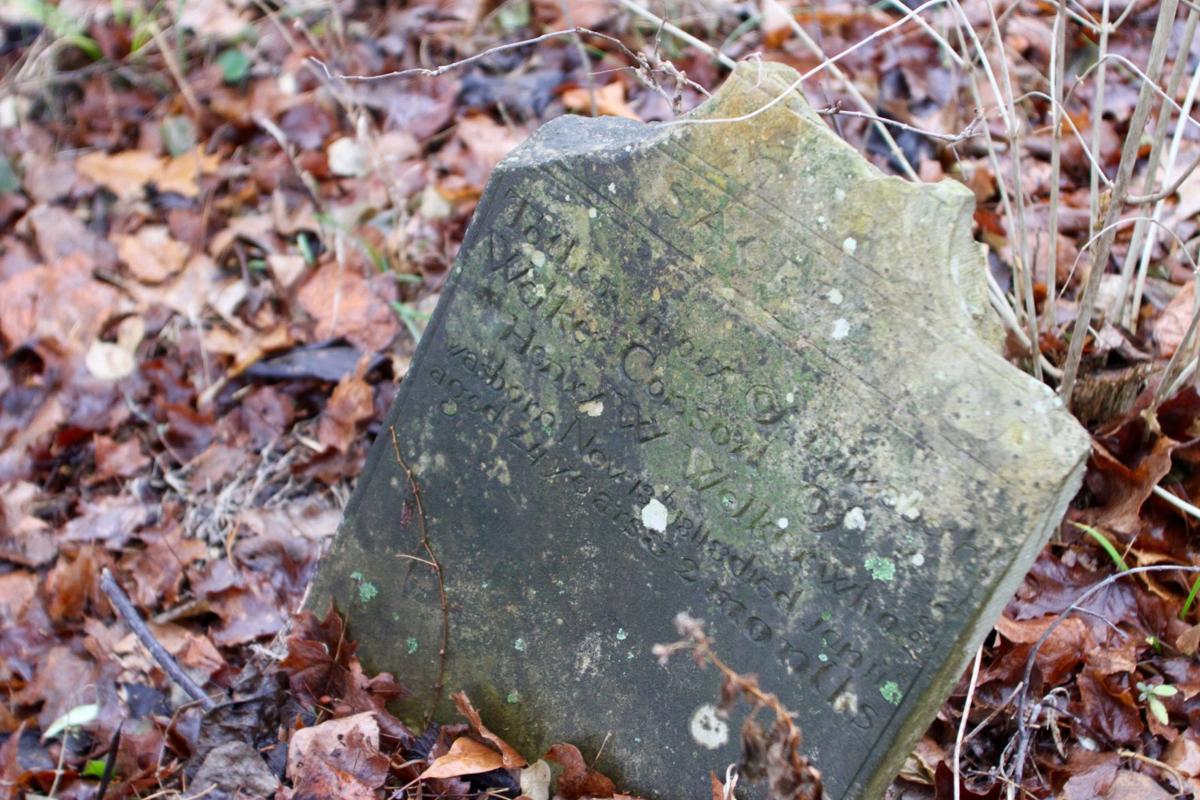 Writing on some of the tombstones located in the graveyards can still be read, though many have decayed beyond repair. 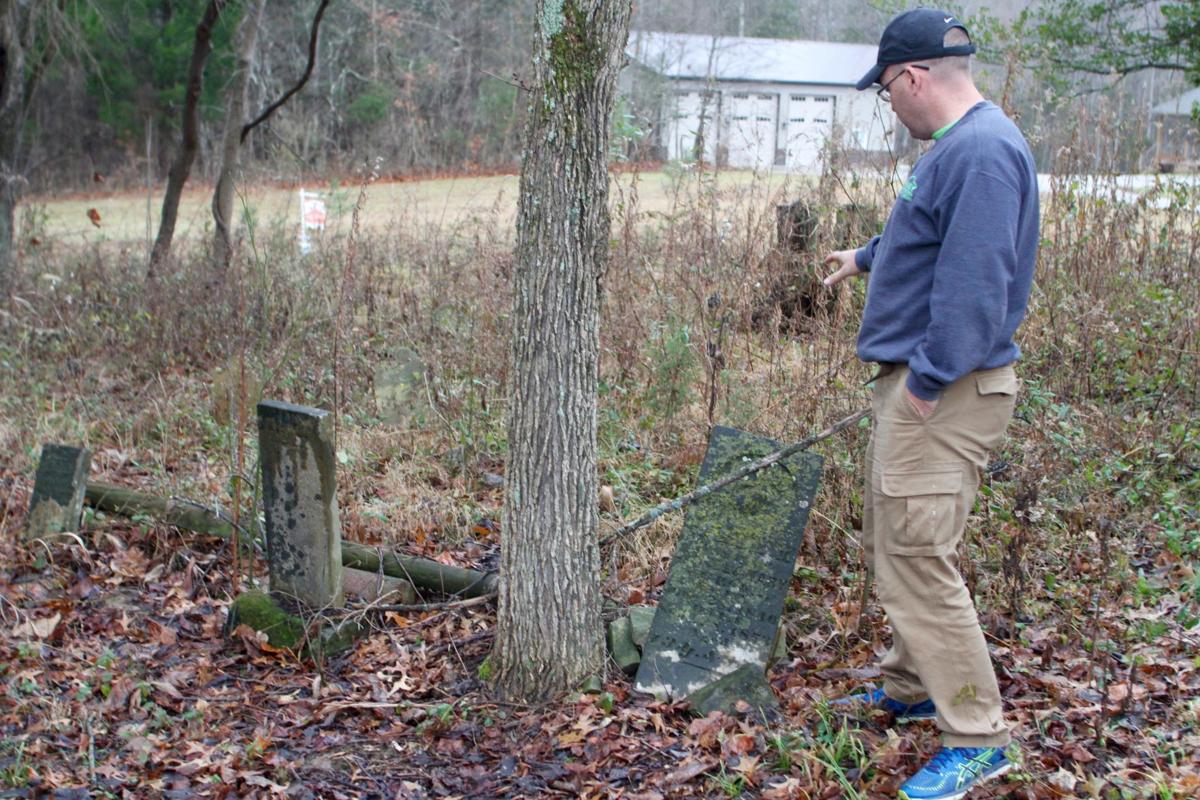 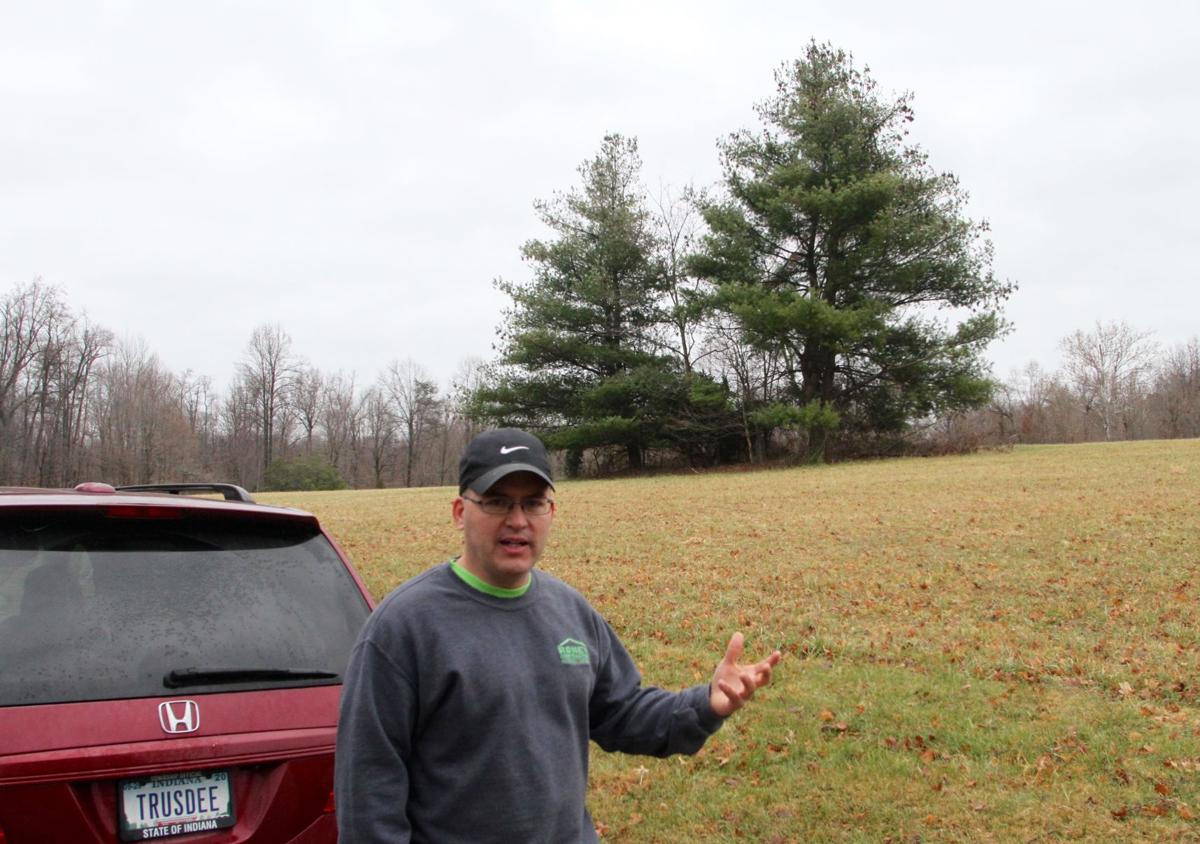 In this small patch of trees off of West Willis Road, some residents remember roughly 30 tombstones standing in an old cemetery dating to the 19th century, though only three remain today. 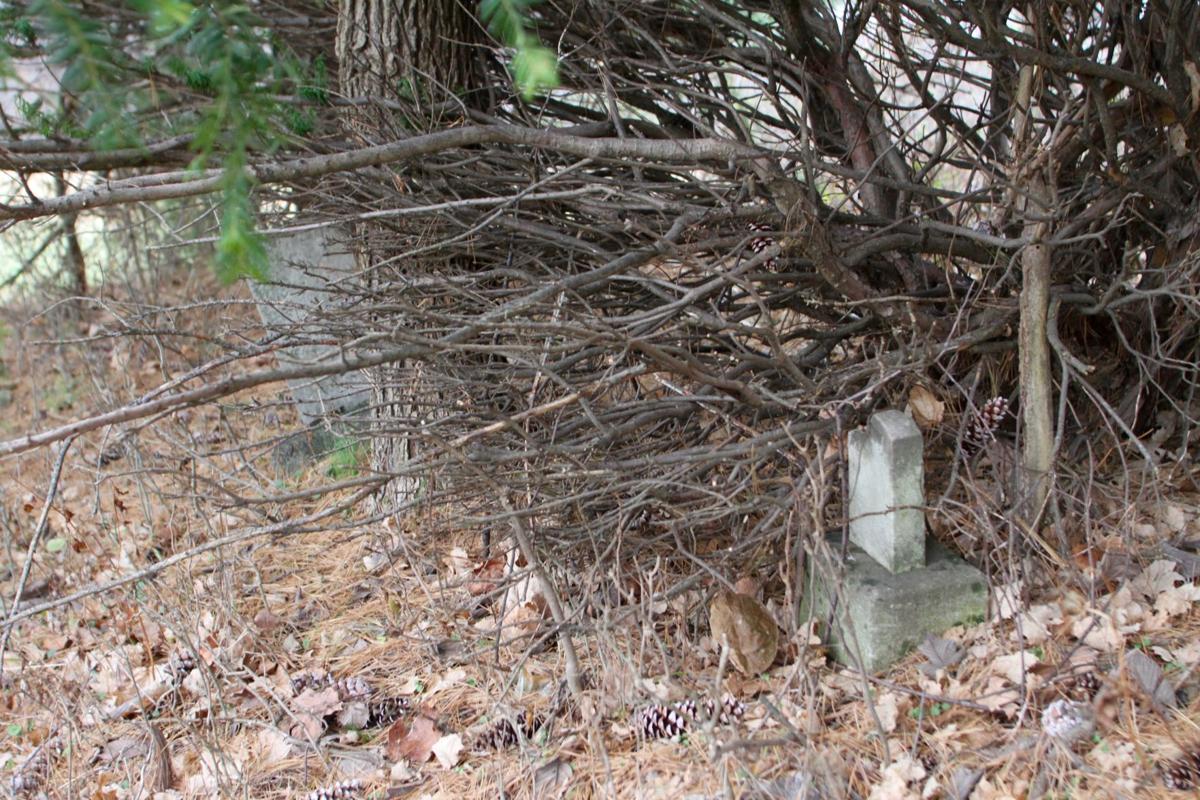 Grave markers in an abandoned cemetery off of West Willis Road dating to the late 1800s have been taken over by trees and shrubbery over the years. 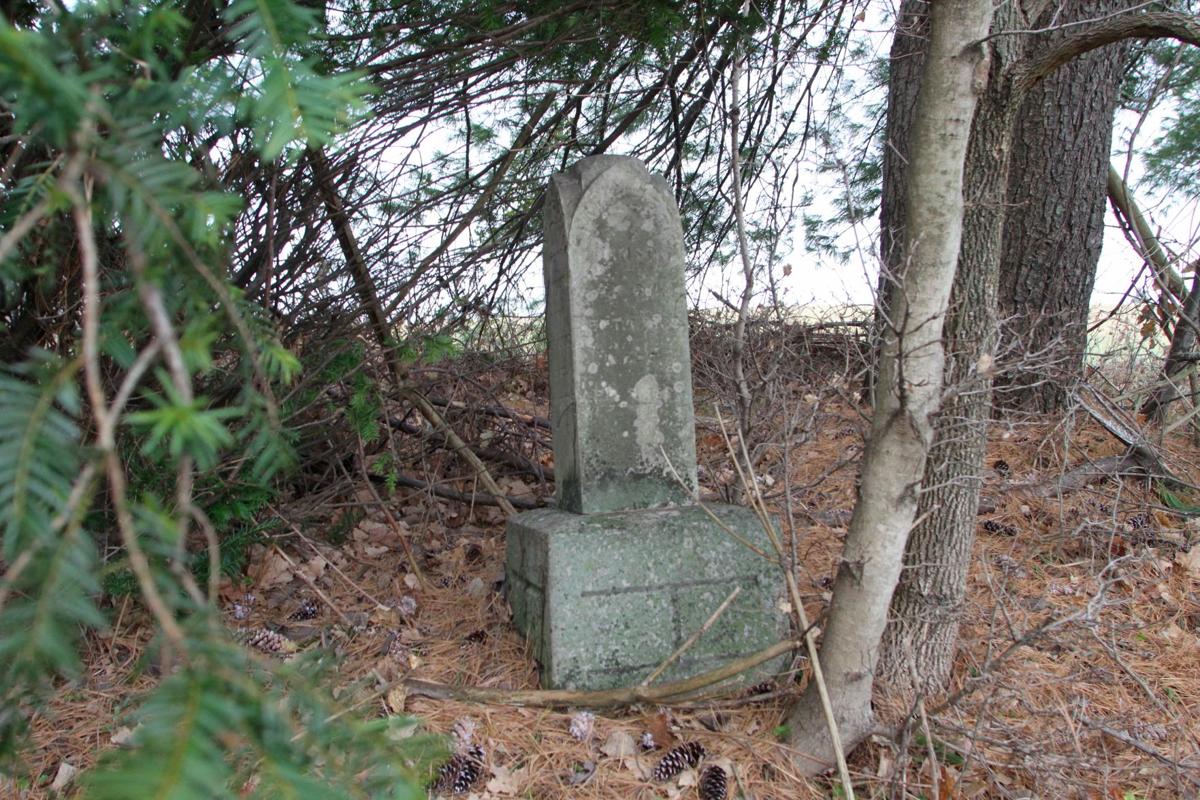 Among the remaining three identifiable gravesites in an abandoned cemetery off of West Willis Road is this rather prominent tombstone.

Georgetown Township Trustee Dee Roney has become responsible for two abandoned cemeteries in the last six months, and he expects more to be discovered in the future.

Writing on some of the tombstones located in the graveyards can still be read, though many have decayed beyond repair.

In this small patch of trees off of West Willis Road, some residents remember roughly 30 tombstones standing in an old cemetery dating to the 19th century, though only three remain today.

Grave markers in an abandoned cemetery off of West Willis Road dating to the late 1800s have been taken over by trees and shrubbery over the years.

Among the remaining three identifiable gravesites in an abandoned cemetery off of West Willis Road is this rather prominent tombstone.

GEORGETOWN — As new developments have increasingly strayed from the beaten path in Southern Indiana, forgotten remnants of years gone by continue to be rediscovered in its rural communities.

Such has been the case in the unincorporated areas immediately surrounding Georgetown. An ongoing boom there has seen former farmlands, golf courses and other generally vacant fields eyeballed as potential subdivisions and commercial developments.

With new attention brought to these previously tucked away acres of land has come the uncovering of old sites — specifically abandoned cemeteries from the 19th century.

The issue isn't limited to Floyd County, according to Jeannie Regan-Dinius, director of special initiatives for the Indiana Department of Natural Resources Division of Historic Preservation and Archaeology. In essence, her job is to locate and document abandoned cemeteries throughout the state, and she said her division has been quite busy in recent years.

"We’ve got a lot of these rural cemeteries," she said. "It could’ve been on the backside of a farm, but today that farm is right next to the interstate. Now, we can document those and monitor them."

In the Georgetown Township, specifically, abandoned cemeteries often fall within the purview of township trustee Dee Roney. The number of such burial grounds under his jurisdiction has doubled in the last several months, and he expects that figure to grow more in the near future.

Roney recently wrapped up work on an old graveyard off of Old Salem Road. In the last 45 days, two additional cemeteries have been brought to his attention, though he is currently only responsible for one.

"It’s rare, but it’s my second one, and there’s only been four since the beginning of the township," Roney said. "That’s been over 100 years, and this is the second one in the last six months. I certainly expect more."

Just over a month ago, Roney received a phone call about a cemetery along Walts Road. A local who grew up in the area told Roney that he was becoming concerned about the state of the site, and that he wanted to inquire about what could be done to intervene.

Roney then went to work tracking down the owner of the property. After getting the owner on the phone, Roney said he was willing to cooperate in giving the burial ground a facelift.

“I told him what my intention is — cleaning it up, putting a fence around it and collaborating with the scouts organization," Roney said. "A young scout is taking on the task of putting a fence around it for his Eagle Scout project. It's overseeing a project, and you’re getting other scouts involved. That’s just part of the leadership involved in that process. He’s going to collaborate with his fellow scouts and troop leaders.”

The project will be financed by Roney's office, with the labor, of course, being provided by the scouts.

Early assessments show the lot being roughly 65 feet by 40 feet in area, with an estimated 30 to 40 burials from the early 1800s located beneath the surface. Roney said this makes it one of the larger graveyards currently under his care, thus making it more interesting that he's just recently become aware of it.

"A lot of these old cemeteries are undocumented, and people don’t know much about them," he said. "Obviously, it’s on the road, but it’s hidden at the same time. I have a brother-in-law that lives down the street. I’ve driven past this I don’t know how many times, and I’ve never noticed it.”

Over the next few days, Roney will begin clearing some of the overgrown weeds and shrubbery on the surface of the graves. He'll also look for common names of those buried on the site. The entirety of the scout project is expected to wrap by spring. Indiana code requires that cemetery be noted on the deed for future owners of the property.

Unlike the Walts Road cemetery, a path forward for a different graveyard that came to Roney's attention just two weeks ago isn't as clear. Its entry into public discussion was prompted by a proposed subdivision set to go up on West Willis Road on a lot that runs adjacent to Interstate 64.

It was there that Roney and the citizen spearheading the effort to preserve the cemetery, Shannon Speth, met with Regan-Dinius last Friday. Since the property owner has not transferred responsibility of the cemetery to Roney, the DNR is currently in charge of oversight, meaning Regan-Dinius helps guide proper care of the site.

If it becomes the township's responsibility, it will be the third abandoned burial ground Roney has taken over in the last six months, bringing the total to five for the township's century-long existence.

Speth is part of a group of nearby residents concerned about the effects of adding 157 new lots of housing to the dead-end road. Their goal is to protest a potential rezoning request that would allow more homes to be built on the land — a request that was formally withdrawn by the developers Monday. She was charged with the task of gathering as much information about the cemetery as possible for the group.

“They said [developers] tried to put a subdivision there years ago," Speth said. "They knew [the graveyard] was there, which is what blocked it before.”

To learn about the cemetery, Speth has utilized resources at government offices and the library. Just as useful have been conversations from long-time residents who remember the burial ground being more robust than it currently is.

Some accounts, Speth said, paint a picture of a fenced off lot that had roughly 30 tombstones. Now, just three tombstones remain in a small wooded section conspicuously standing tall in the center of acres of open land.

"They’re all from the 1880s," Speth said. "There’s still a lot of hearsay about where the other tombstones are. It's funny that there are only three stones there now."

According to Regan-Dinius, the site has been on the DNR's radar since 1999. Any potential development on the site will now have to go through the proper channels of the DNR to move forward. Developers will have two options. They can either build around the cemetery and leave 100 feet between it and any construction, or they can relocate the graves.

"We’ll help them with defining the boundaries," Regan-Dinius said. "That could be through archaeological means. Each cemetery is different. They would then have to avoid that area. If they feel that construction has to be there, then we guide them through the requirements for moving it.”

If developers were to relocate the graves, they could do so through an archaeological project monitored by the DNR or privately through a funeral home. Either way, the developers would be responsible for the cost.

It would theoretically be cheaper for them to go through a funeral home, Regan-Dinius said. Unlike the archaeological option, however, that doesn't guarantee approval from the DNR.

“They would have to be able to prove to our office that they disinterred everyone," Regan-Dinius said. "Those [remains] aren’t going to be easily found. The site that we’re talking about, we have neighborhood people who have been living there their entire life that say they remember when a guy removed a stone or that they remember a fence. All of that plays a factor in this."

Regan-Dinius added that she will do more archival research in the coming weeks.

Though it is currently unclear how many burials took place on the lot, Roney said one thing is for sure — the technology utilized for an archaeological survey will uncover the exact location of graves.

“It may be all gone, the casket and body decomposed," he said. "There may be next to nothing. It might be a ring or a hinge. It can be very miniscule. But in each cavity, you can tell whether or not it’s original soil. It doesn’t matter if you removed the headstones, you’ll still be able to find the gravesite. Archeology will reveal all of that."