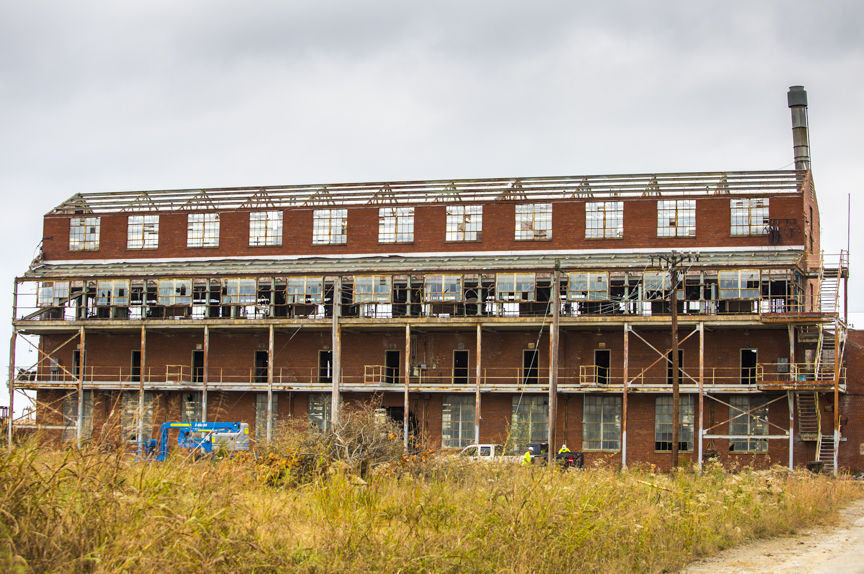 The Charlestown Powder Plant looks glum as it faces demolition. 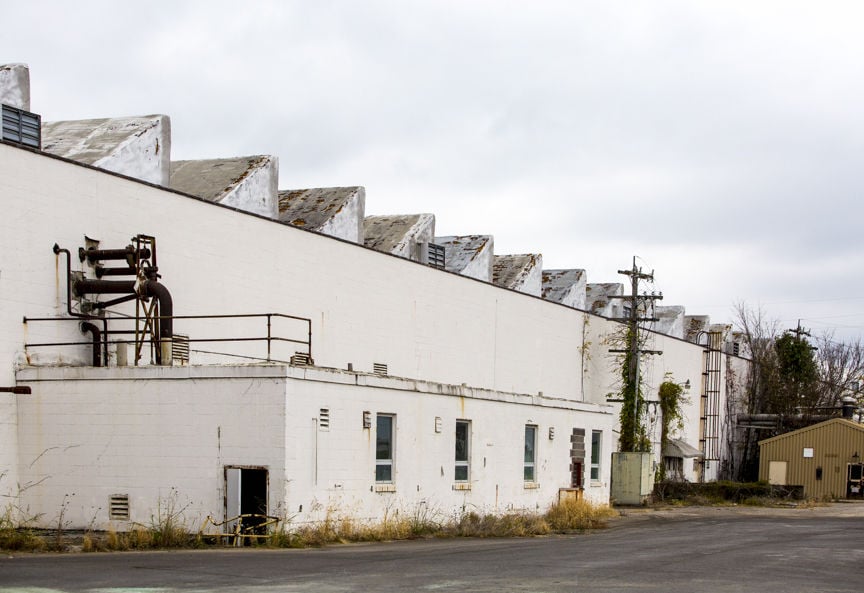 The bag building held rows upon rows of people who would sew bags used to transport materials at the Powder Plant. 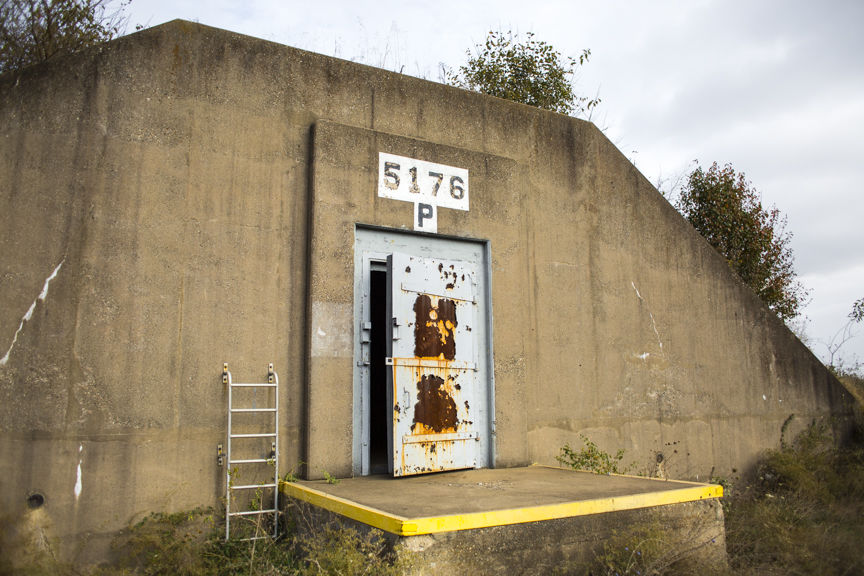 The "igloos" stored explosives and were designed to, in the event of an explosion, force the blast to go upward, in an effort to save its immediate surroundings or passersby. 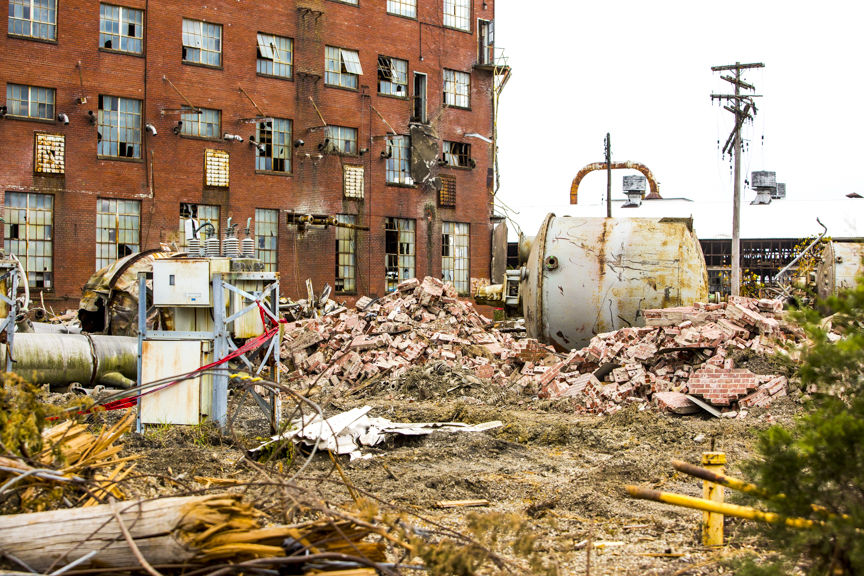 A retired tank sits amongst piles of bricks at the Charlestown Powder Plant. 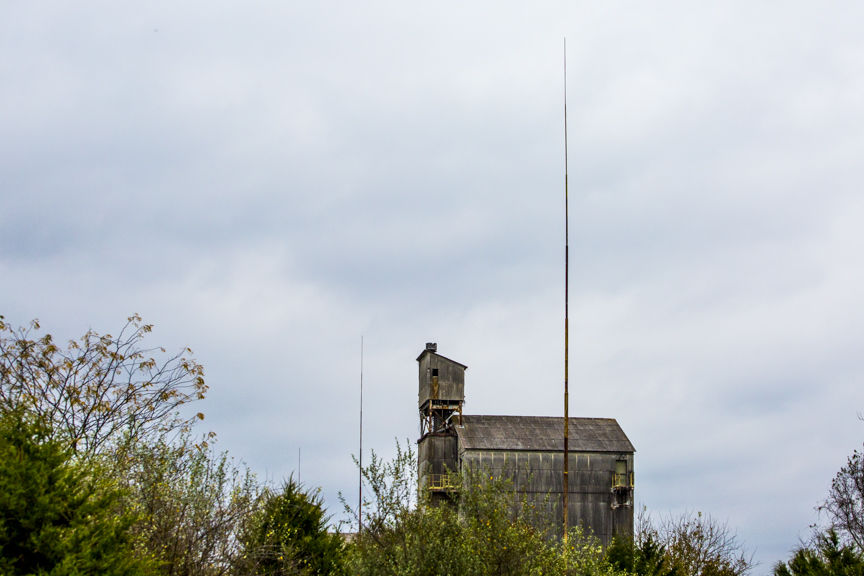 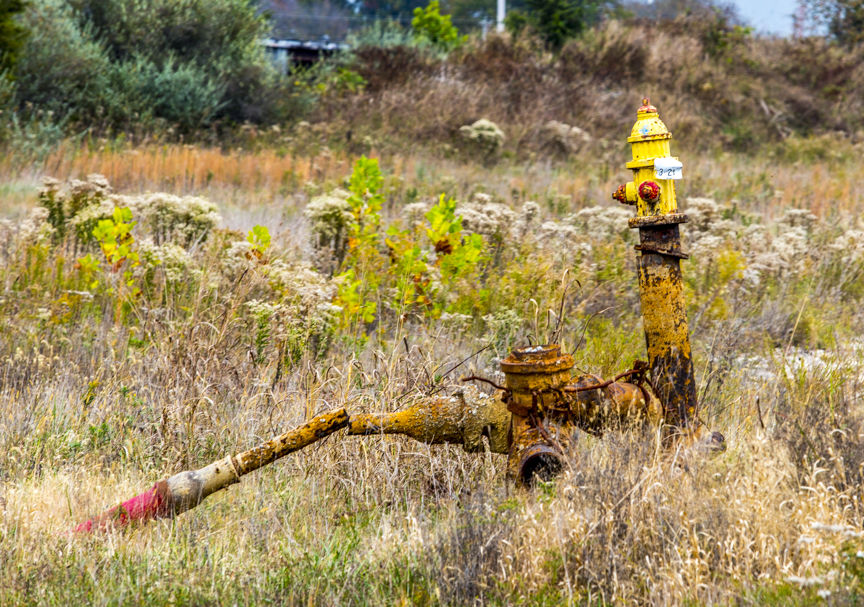 A fire hydrant system sits above ground at the Charlestown Powder Plant. 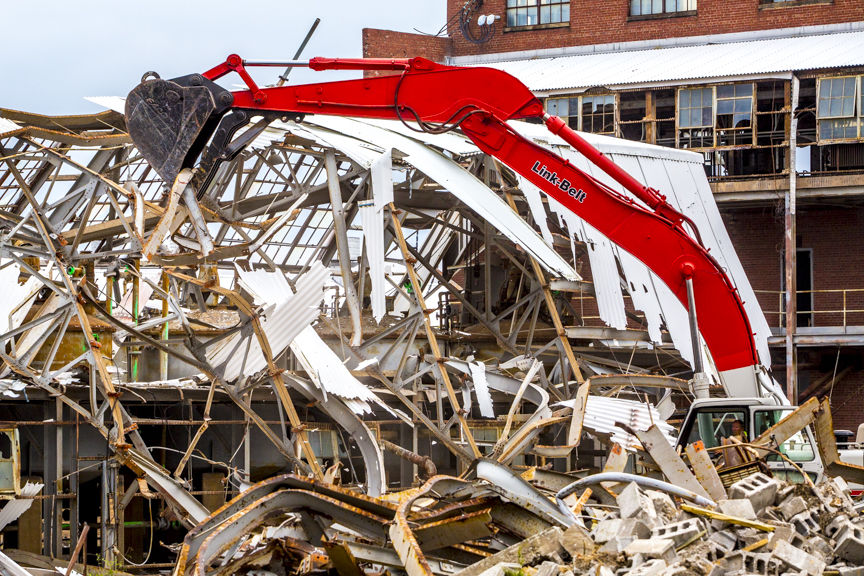 An excavator demolishes a building at the old Charlestown Powder Plant. 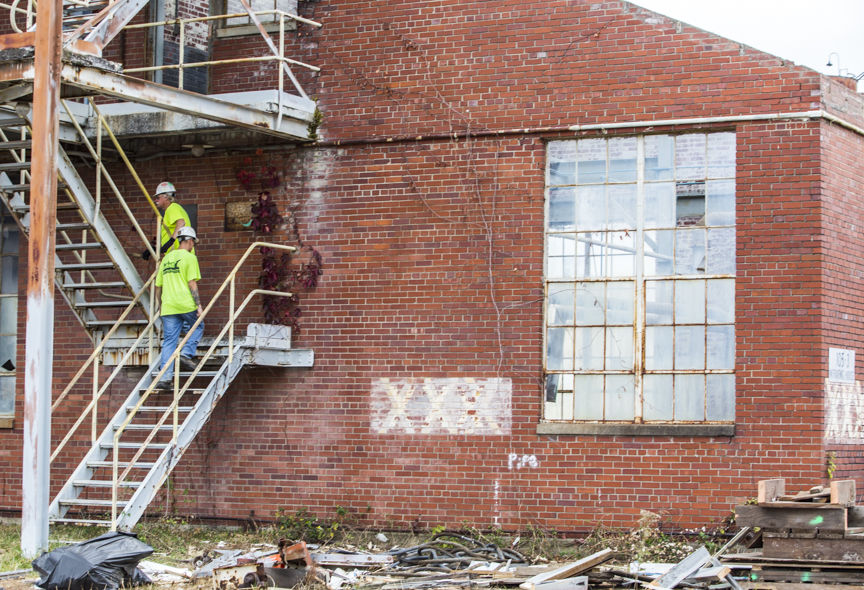 Two demolition workers climb the stairs to the top story of one of the old nitrating houses at the Charlestown Powder Plant. 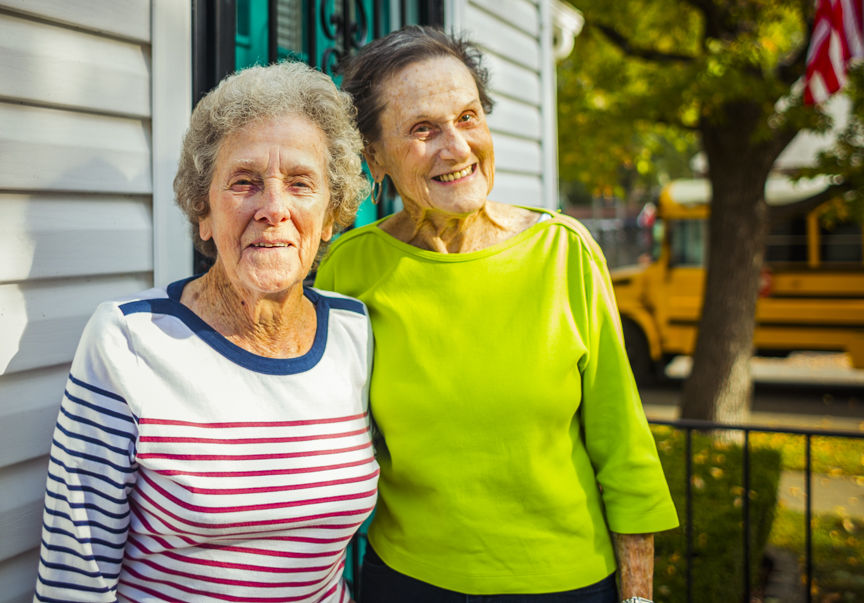 Vada Leavitt, left, and Aleene Dismore stand outside their house in Clarksville after recounting their memories of working at the Charlestown Ammunition Plant. 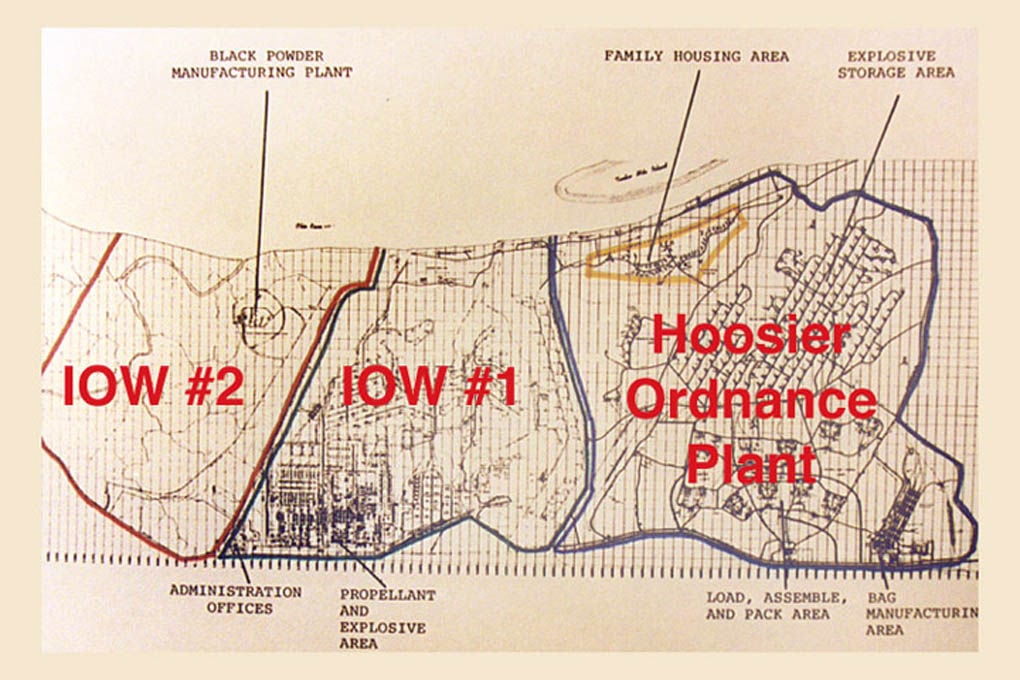 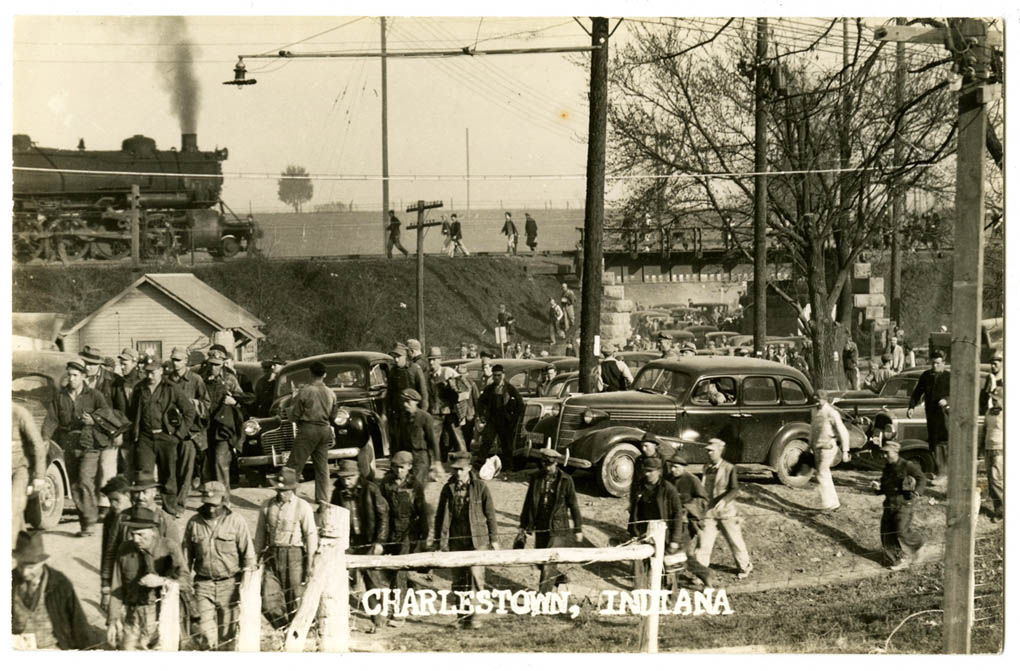 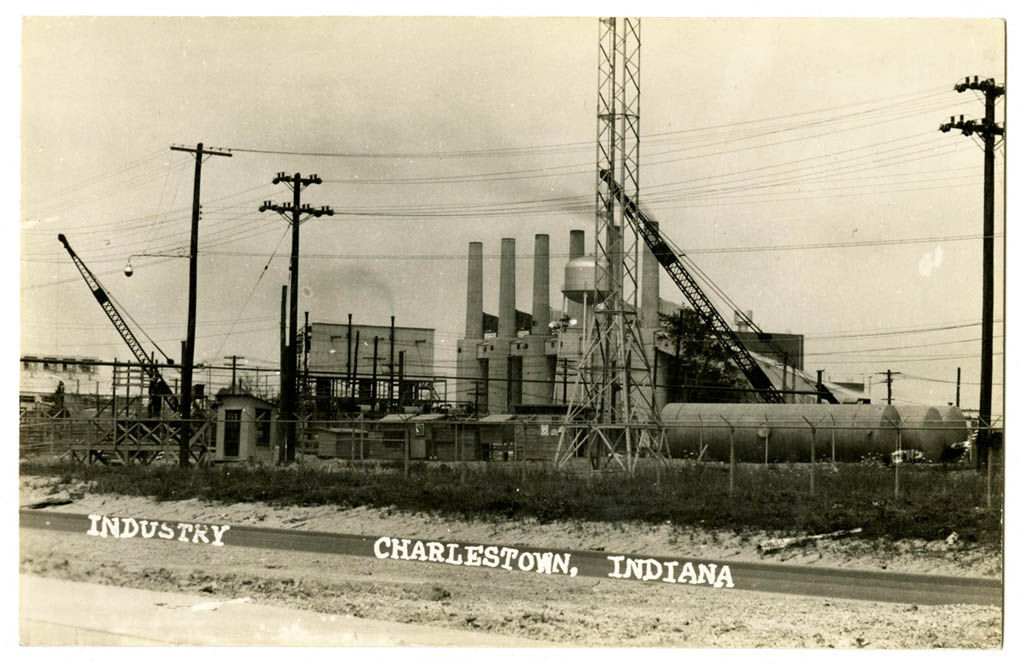 The Charlestown Powder Plant looks glum as it faces demolition.

The bag building held rows upon rows of people who would sew bags used to transport materials at the Powder Plant.

The "igloos" stored explosives and were designed to, in the event of an explosion, force the blast to go upward, in an effort to save its immediate surroundings or passersby.

A retired tank sits amongst piles of bricks at the Charlestown Powder Plant.

A fire hydrant system sits above ground at the Charlestown Powder Plant.

An excavator demolishes a building at the old Charlestown Powder Plant.

Two demolition workers climb the stairs to the top story of one of the old nitrating houses at the Charlestown Powder Plant.

Vada Leavitt, left, and Aleene Dismore stand outside their house in Clarksville after recounting their memories of working at the Charlestown Ammunition Plant.

CLARK COUNTY — The red-and-white excavator unhinged its jaw and blindly smashed its face into the white roof of a collapsed building.

The basilisk-like machine was demolishing one of 700-800 structures on the north end of River Ridge Commerce Center — formerly used to manufacture smokeless powder for the U.S. Army as part of the Indiana Army Ammunition Plant.

Soon, possibly by 2018, the destruction of all the northern buildings will be complete — making way for new warehouses and production facilities like the ones that already populate the southern end of the former plant.

Troy McCormick, a local historian and museum consultant, put together “Charlestown Powder Plant: 1940-1992," a documentary released in 2005 about the Ammunition Plant.

McCormick’s fascination with the plant doesn’t mean he’s broken by its demise.

It’s a rebirth for the former job-creator, he said.

The Ammunition Plant drastically changed the path of its bordering towns of Charlestown and Jeffersonville, as well as the lives of their residents, when it was built in the 1940s. Now, that’s happening again as thousands find work within the commerce center’s borders.

But that would not have been possible if a man from Wilmington, Delaware — the home of DuPont— hadn’t scouted land near Charlestown for the site of a new smokeless powder plant.

Before the Ammunition Plant, there was farmland. Acres upon acres of open space interrupted only occasionally by “clusters of humanity,” as McCormick said: houses, gas stations and churches.

But the United States’ ammunition reserves and army supplies were depleted after World War I, and another conflict was on the horizon. The country would need ammunition and a place to produce it, according to McCormick’s documentary.

A nondescript spot in Middle America along the Ohio River met the government’s four requirements for an ammunition plant: nearby water, cotton, a large plot of land with few residents and — most importantly — a location at least 150 miles away from the country’s coastline, safe from potential attacks.

The construction process for IOW #1 would take nine months, and finish 23 days ahead of schedule.

Vada Leavitt of Clarksville remembers driving down Highway 62 with her father during the building of IOW #1.

She was 13 when her family moved to Charlestown from Palmyra so her mother could work there.

Many other households would do the same.

All the boarding houses within 25 miles of the town were filled, according to McCormick’s documentary, and newcomers resorted to living in trailer parks or even “rooms” rented out by townspeople in their chicken coops and cars.

Leavitt, along with her sister, Aleene Dismore, and the rest of her family, ended up living in Pleasant Ridge, a Charlestown neighborhood that still exists today, but may be demolished starting next year. The development was built to house the thousands pouring into the town for work.

Jeffersonville and the towns surrounding the Ammunition Plant were also affected by the growth in the area.

A chunk of the Ammunition Plant's workforce came from Jeffersonville, McCormick said. Workers coming from Louisville would also have to travel through Jeff to get to the plant.

As a result, businesses such as gas stations and restaurants popped up in Jeffersonville.

But Charlestown was affected the most.

“They got hit,” McCormick said.

The town found solutions for some of the problems that came with their growth. They received grants for extra police officers, and they dug up and added new water and sewer lines, McCormick said.

But businesses in the area were happy with the new increase in clients, he said.

“It was a blessing and a curse to have this huge influx of people coming in,” he said.

And the bad sometimes threatened to overpower the good.

By the end of 1941, both IOW #1 and the Hoosier Ordnance Plant were built.

Employees produced ammunition at IOW #1. They bagged it at the Hoosier Ordnance Plant.

In 1944, the government acquired 8,300 more acres near Charlestown to build IOW #2. Workers would manufacture rocket propellant there.

Production did start at IOW #2, but only lasted five weeks.

On Aug. 14, 1945, it was announced that the Japanese surrendered to the United States and the other Allies of World War II.

IOW #2 was shut down swiftly, according to McCormick’s documentary.

A truck with a loudspeaker mounted on the front rolled through the parts of IOW #2 still being built — calling for workers to lay down their tools, and telling them they would be notified later about their final check.

A little over 15,000 people were laid off from IOW #2 in total. Their hammers, saws and other equipment could be found at the site for years afterward.

Employment fluctuated wildly at the Ammunition Plant, depending on whether the United States was involved in a conflict.

The Korean and Vietnam wars brought more people to the plant, only to take them away at their ends.

Small businesses went from hundreds of customers a day to a handful during that time, McCormick said.

Employees must have been affected, too, he speculated.

Leavitt and Dismore, both of whom started working at the Ammunition Plant after reaching adulthood, said they weren’t too concerned with the layoffs. The newer workers were asked to leave first, and Leavitt and Dismore worked at the ammunition plant for a long time.

Others weren’t so lucky, but that was to be expected with war-time work, McCormick said.

The losses, like the growth, affected Charlestown more than Jeffersonville and other surrounding areas.

“I think Charlestown was at the epicenter of the good and the bad,” McCormick said.

In 1992, production ceased at the Ammunition Plant. Only 380 people worked there.

From army to industry

In October, River Ridge Commerce Center held an event outside the north end of the Ammunition Plant. They were celebrating being able to start work on that part of the plant after years of negotiations with the government.

He compared Charlestown’s plight to those of a one-factory town where the factory left. Housing problems and unemployment plagued the city after the Ammunition Plant shut down.

He sees hope now that the old buildings are being demolished.

“I say it’s the 1940s again, but in a different way,” he said at the ceremony. “We have new industry coming in. We have new retail. We have new housing. We have new excitement and a new vision.”

The road to Hall’s speech started in 1993 when Congress passed legislation allowing private development of the ammunition plant.

Thousands of acres were deeded to create Charlestown State Park and some of IOW #2 is now owned by the Jeffersonville-based Hughes Group Inc. The rest of the approximately 12,000 acres, however, was renamed Facility One. It would be the site of a future industrial park.

But if the government hadn’t bought the land in the ’40s to create an ammunition plant near Charlestown, growth would’ve been different, McCormick said. It might have meant housing communities along the river.

Now, those acres of open land are untouched woodlands and space for factories and other businesses.

Leavitt sat in her spotless living room in Clarksville, discussing her years as an Ammunition Plant employee.

“Everybody worked at the powder plant,” she said.

Dismore sat on the other side of the room, agreeing.

“The money was good,” she said.

Leavitt worked at the bag plant while Dismore floated between supervising and payroll.

Working at the Ammunition Plant was fun, they said. Most of the workers got along.

Leavitt still meets with members of the production group with whom she used to work. Twice a year, they gather at Golden Corral and talk of the old days.

Dismore does something similar, she said, but not too often.

Many people in the area have connections to the plant, she said. But she acknowledges that number is shrinking.

“A lot of them are dead,” she said matter of factly. “After all, that does happen to us.”

Jerry Acy, the executive director of River Ridge, doesn’t want the memory of the Ammunition Plant to disappear.

The development authority still owns a “tremendous” amount of records about the plant, along with some of the equipment used to build it.

Acy wants to keep some of the buildings on the north end from being destroyed, he said.

He can picture one housing a museum filled with the artifacts from the plant. There aren’t any official plans for one, however.

Southern Indiana made significant contributions to the war effort with the Ammunition Plant, Acy said. Sacrifices were made for that effort, including people giving up their land for it to be built.

River Ridge will continue to remember what it was in addition to thinking about where it’s going.