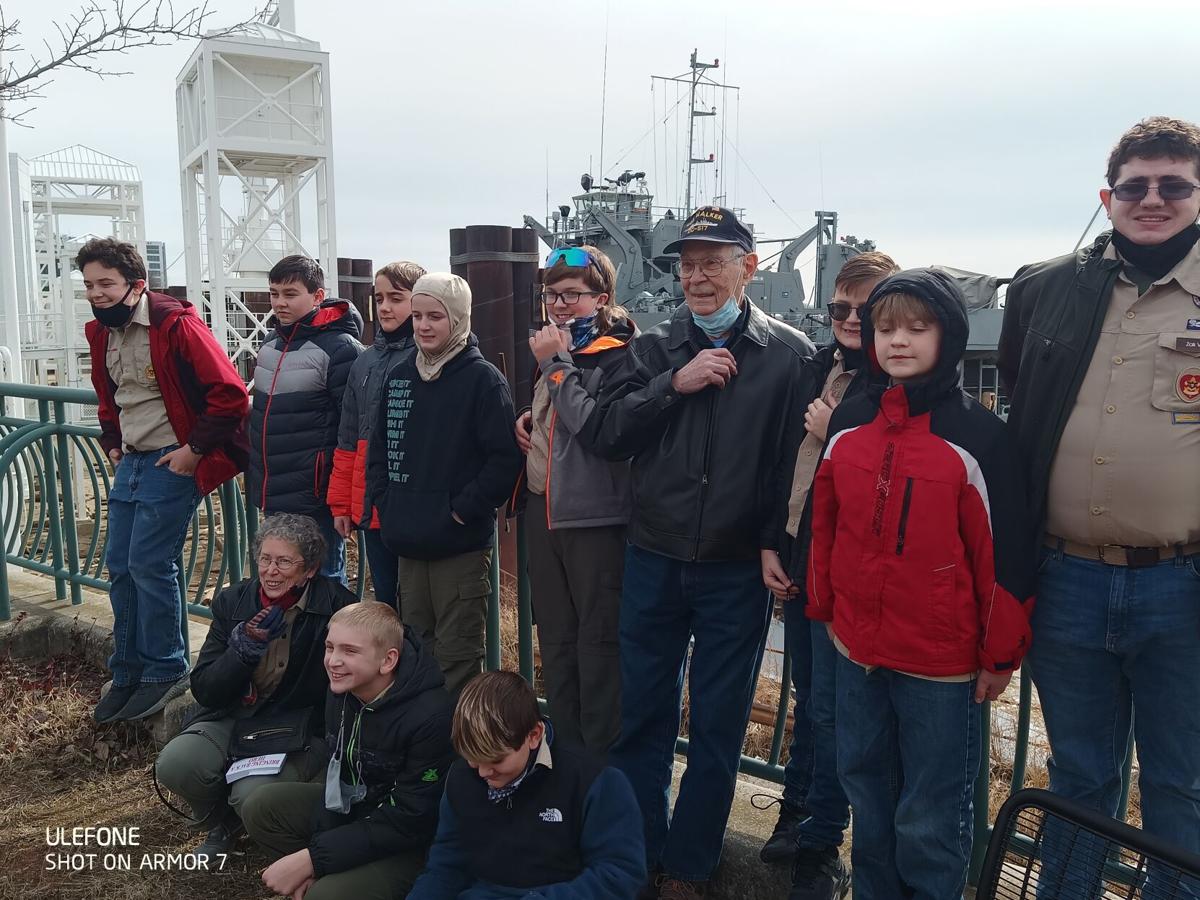 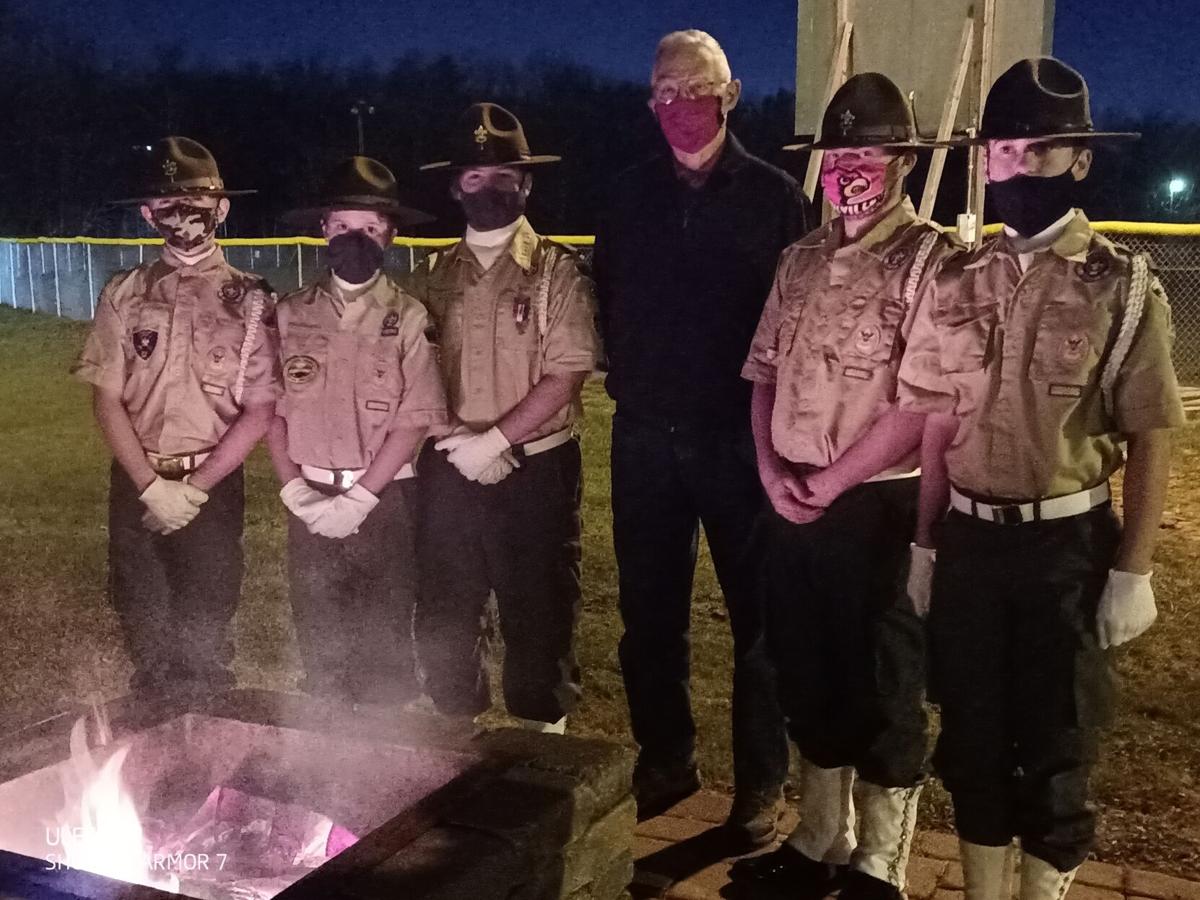 Grand stories. About the war he entered in 1944, a month after his 18th birthday, and the kamikaze pilots who tried to take out the USS Walker, the destroyer on which he served in the Navy as a gunner’s mate.

“It sounded like a great adventure. But things turn different when you get out there,” Mr. Mooney said, his voice with a cadence of the ocean waves. “The memories are still up there. It was something you don’t forget.”

Tragic stories. Like when he first started volunteering with disaster services for the Red Cross more than 25 years ago and he came upon a mother, father and two young children standing only in their pajamas in 5-degree weather as they watched their fire-ravaged house collapse.

“I had the resources behind me to take care of them,” Mr. Mooney said, his face with a gentle smile. “That’s a good feeling. That’s a real good feeling.”

And on this mid-April Monday evening at Tunnel Hill Christian Church in Georgetown, the 93-year-old shared a story of a different kind of bravery to the 40-plus Boy Scouts circled around him.

Mr. Mooney is the Scout Master for Troop 4025, possibly one of the oldest to hold the honor in the country at this time. For three months, the WWII veteran will serve, signing the boys’ rank advancement cards and giving the Scout Master’s Minute at the end of each meeting.

With a life filled with accomplishments, this is a new one for the veteran. Raised in Louisville during the Depression, he didn’t participate in Boy Scouts as a child. But now, Mr. Mooney stands before the young men wearing his uniform, the unit number displayed on the left sleeve. A special patch with the USS Walker name and insignia dangles from his right pocket.

On July 5th, the Scout Master will once again become Al Holt and Mr. Mooney will be his assistant. Al came up with the idea to invite Mr. Mooney to be the leader of their troop after Laura Meyer, the daughter of Mr. Mooney and charter organization representative for the troop, introduced them during a flag retirement ceremony. A trip with the Scouts to view a tank landing ship from WWII cemented their friendship.

“They have a three-month opportunity to get the Greatest Generation to sign their scouting material,” Al said. “Even for the older boys that are here, it’s a pretty big deal. If you want to get something signed by Mr. Mooney, you’ll step up and get going.”

And the young men have.

Responsibility and love of their nation come naturally to the Scouts. The 12 points to their Scout Law reinforce this. Back in WWII times, Al explained members of this troop would have conducted drives to collect copper, rubber and aluminum for the war effort. In today’s times, this sense of community looks a little different.

“At the end of the day, if they live by the oath and the law, trustworthy, loyal, helpful, friendly, courteous, kind, obedient… then we’re teaching the boys to love before someone teaches them how to hate,” Al said. “And right now in society, we need to teach that first because we have a lot of angry young men. In this unit, that’s the opposite.”

“It’s fun to be around kids like this. You hear so much about the bad ones but there’s an awful, awful lot of good ones, too,” he said.

And with his closing words in the Scout Master’s Minute, the WWII veteran told a story of how to be an even better citizen.

He spoke of a time when he had hired three men from the Soviet Union at the print shop he worked. They were good employees but a few other co-workers didn’t like working next to a “bunch of Russians” and talked of making life miserable for the guys to run them off.

That set Mr. Mooney off and he warned the men about their behavior. The fellas from the Soviet Union stayed.

You see, adults bully, too, Mr. Mooney reminded the boys.

And with that, Mr. Mooney turned and rejoined the circle of young men, his stories following him for another time.

Win tickets to Penny Lane at the Park