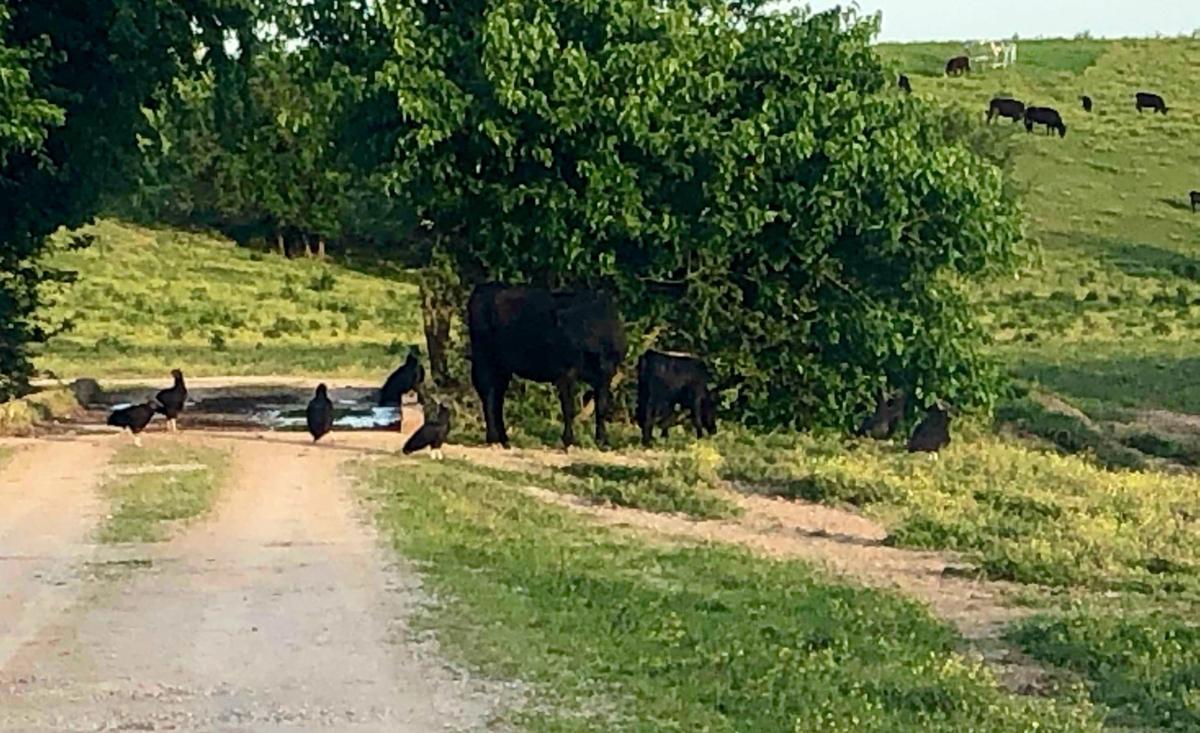 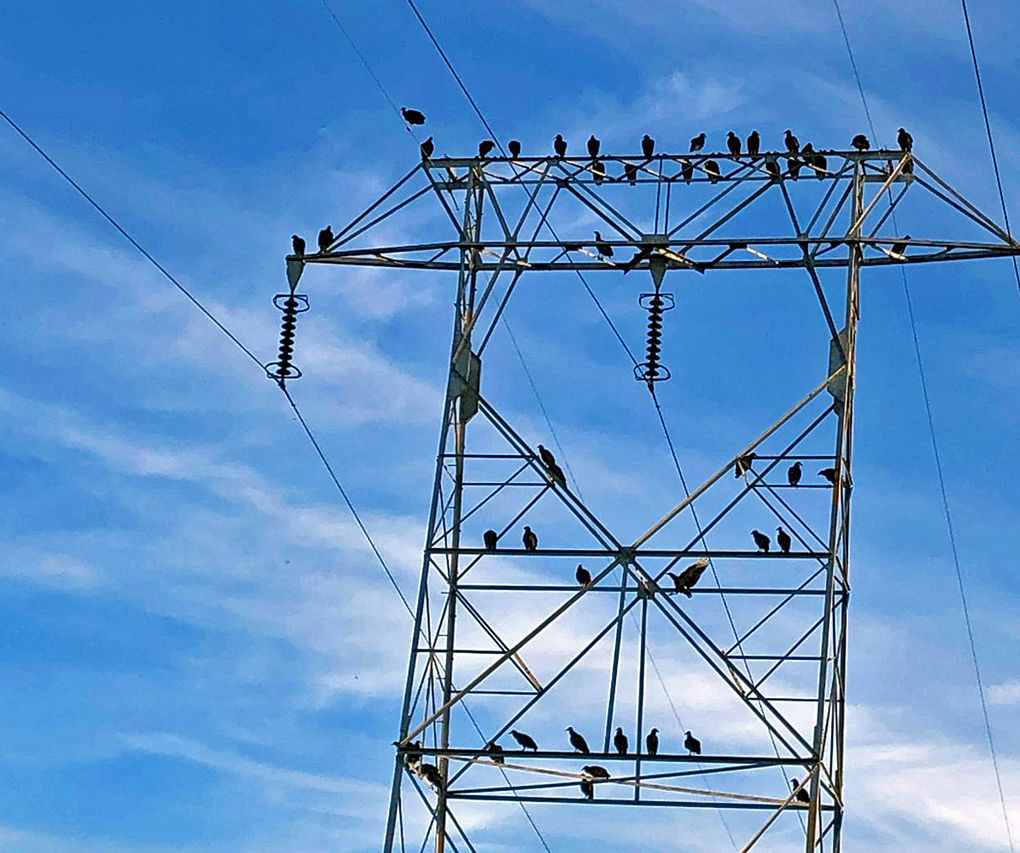 Dozens of black vultures linger on a tower near Karen Foster's Jeffersonville farm.

Dozens of black vultures linger on a tower near Karen Foster's Jeffersonville farm.

SOUTHERN INDIANA — They swarm by the dozens, searching for their next meal — living or dead — and instilling fear in people who encounter them.

Yelling doesn't scare them off, nor does approaching them in a vehicle and beeping the horn. A warning shot from a gun isn't even enough to shoo them away in many cases.

“I’ve heard of stories where they’ve eaten people’s roofs," said Karen Foster, who has over 100 head of cattle on her Jeffersonville farm. "They’re attacking our animals. They’ll leave it to where there is nothing but bones left. They’re coming after our live calves and picking out their eyes and their hind ends. We’ve lost five calves alone. We’ve lost a mommy having a calf. We know for sure the cow was dead and the calf was eaten.”

Vultures are usually thought of as scavengers that rely on already-dead carrion for food, not hunters. Those with this common conception, however, may be startled to find out this does not always hold true.

Such is the case with black vultures, which are the culprits causing headaches for farmers throughout the country and region in recent years.

"We’re used to having vultures," Foster said. "The vultures eat the afterbirth, and we’re used to them because of that. The black vultures have become aggressive. This morning when I left home, there were probably 50 sitting on a fence, just sitting there watching. It’s crazy. They’ve become so aggressive that they’re actually sitting in the herd with our cows. What they’re doing is sitting on the back of a very healthy cow who is laying down, and the vulture is just eating their skin. We used to honk and they’d move, but they don’t anymore. We used to be able to shoot a gun into the ground and it’d scare them away.”

What makes the black vultures so much more aggressive than similar birds like turkey vultures is the tactics they have developed to get food in the wild.

“Black vultures are interesting in the sense that they don’t have the best sense of smell though they have eyesight," said Allisyn Gillet, an ornithologist with the Department of Natural Resources. "They are scavengers. Typically, vultures have a good sense of smell to find stuff to eat. When it comes to black vultures, they don’t have that. What they do is displace turkey vultures from the carcass by coming in groups. Turkey vultures will get first dibs, then the black vultures will come in and displace them aggressively. That’s what explains some of the behavior.”

Farmers and livestock in the South have become much more familiar with black vultures over the years. The species' migration and habitat expansion farther north into regions like Southern Indiana, however, have introduced them to new, less-adapted prey.

"Those cows have been dealing with them for a long time in southern states like Florida," Gillet said. "As they expand farther north, you have cows that are not familiar with the species and their behaviors. They do what they’ve been doing in the South but with more naive victims. These livestock are not as keen on how to defend themselves."

Adding even more stress to the mix is the fact that the vultures are federally protected, meaning they can't be killed.

“The protective status comes from this long-held law called the Migratory Bird Treaty Act," Gillet said. "It protects any migratory bird in the United States. This was put into effect to deal with the trade of feathers. It was to prevent birds from being hunted. They have really pretty plumes, so this protects them from their feathers being sold and traded. It’s been in law since 1918.”

To deal with the problem legally, farmers have had to get creative. For Jared Combs, who has operated his farm of roughly 150 goats and some cattle for 30 years, it means finding new avenues of protection.

“We have guard dogs who stay with the goats," Combs said. "They stay alert and chase those birds off. Our diligence with the cattle is we’ll birth them in a barn now. I’ve shot at them, but I’ve never shot one. I’m on some livestock forums, and this issue isn’t limited to us. It’s nationwide. Some states will let you be more aggressive. There are traps. What we’ve done is just be diligent. The dogs primarily keep coyotes away, but now they bark at these birds daily. We really haven’t done anything to eradicate them other than that and being watchful.”

But such solutions aren't seen as viable in the long run.

“What I’d like to be able to do is to shoot them if there is a real problem," Combs said. "They talk about building a rectangular cage with an opening on top with bait inside, then you can spring it to trap them. You can trap multiple at that stage. I don’t really know how you get rid of them. Maybe there is just a group of problem birds. I’m not familiar with how they work. I think people want to eliminate problem birds. You have to protect your stock. Even if a pet were injured in your backyard and immobile, they’d have them dead in a few minutes. It’s primarily an agricultural issue, but you don’t have to think very hard to imagine a scenario in which it becomes a suburban problem.”

Enter local politicians, like State Rep. Rita Fleming, D-Jeffersonville, who have worked to help her constituents find a resolution. According to Fleming, there are options for farmers to eliminate birds if the proper permits are acquired.

“I reached out to the DNR, and you can get a permit to basically shoot the vultures," Fleming said. "You can go online and get the applications. There are actually two. You have to demonstrate that your property has been in danger. You get a federal permit, then that has to be sent in to the U.S. Fish and Wildlife Service. You have to get a federal permit and a state permit. They will then issue the permit [to kill the birds]. If you do it online, it’ll process faster."

Fleming and Foster alike said the state and federal offices are becoming more aware of the problem and hope that it encourages an expedited permitting process.

“Rita said that they have now realized the urgency of this," Foster said. "She said it’s just as simple as applying for the permit and they’re issuing them on the spot. We should be able to shoot the animals that are endangering the lives of our livestock. I think they’re working on it. As soon as we contacted Rita and Sen. Ron Grooms [R-Jeffersonville], they got right to work on it. I’m very appreciative of that.”

Gillet noted that once the permit to kill is issued, that does not mean it's free for all. Rather, farmers will still be limited as to how many birds they can kill to keep the species from slipping into endangerment.

In the meantime, Gillet said there are other ways to deal with the high population of problem birds.

“There are definitely lots of other methods that are not lethal," Gillet said. "There is an interesting method by using an effigy, which is a black vulture carcass, especially a black vulture that was in that group. I’m pretty sure these birds are really smart and can recognize, so I think it has a very profound effect on them. They avoid areas where they may feel threatened. Pyrotechnics can also scare them off. Sometimes they recommend using dispersal methods like using pyrotechnics in a roost."