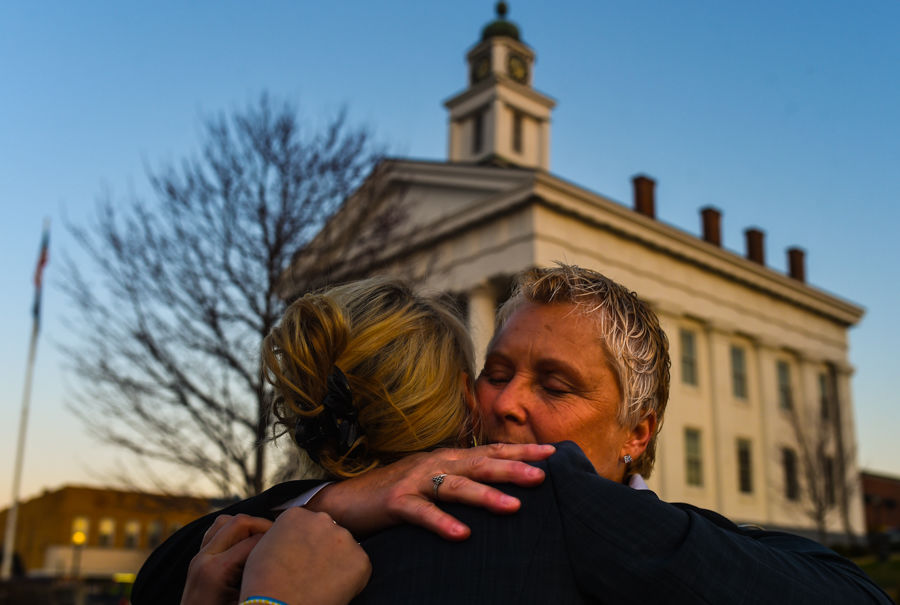 In March, Lisa Livingston turns to her partner, Robin Brown McMillin, for support upon arriving to the Orange County Courthouse for her sentencing in Paoli. She received a 30-year sentence that day. On Friday, the Indiana State Supreme Court revised that sentence to a mandatory 23 years, with 'whatever time remains be served in community corrections.' 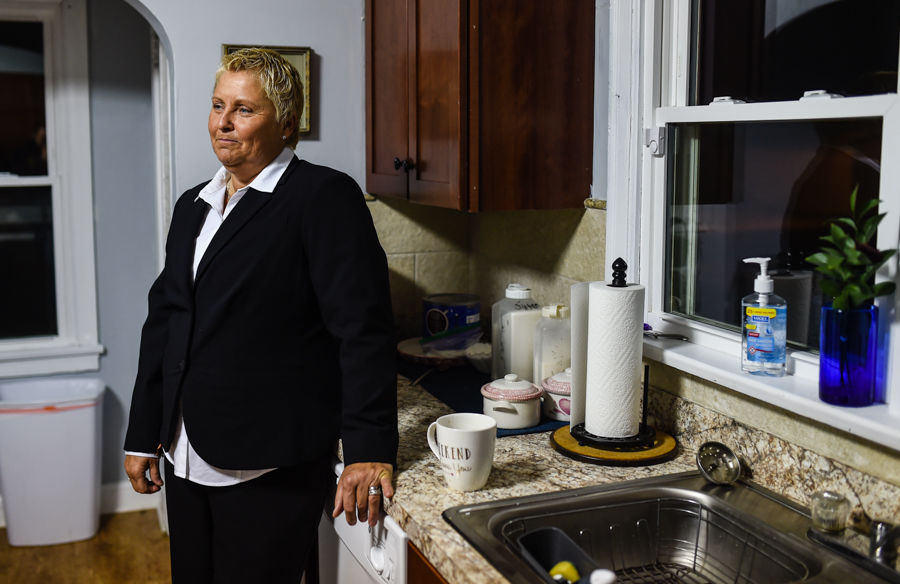 Lisa Livingston takes a moment to herself while having her last cup of coffee before heading out to Paoli for her sentencing in March. "I'm at peace", said Livingston when asked how she was feeling the morning of her court date.

In March, Lisa Livingston turns to her partner, Robin Brown McMillin, for support upon arriving to the Orange County Courthouse for her sentencing in Paoli. She received a 30-year sentence that day. On Friday, the Indiana State Supreme Court revised that sentence to a mandatory 23 years, with 'whatever time remains be served in community corrections.'

Lisa Livingston takes a moment to herself while having her last cup of coffee before heading out to Paoli for her sentencing in March. "I'm at peace", said Livingston when asked how she was feeling the morning of her court date.

NEW ALBANY — The founder of a local women's recovery center will soon be coming home from prison after an Indiana Supreme Court opinion.

New Albany attorney Jennifer Culotta says she is “ecstatic” over the supreme court’s decision on Friday to revise Lisa Livingston’s 30-year prison sentence to a mandatory 23 years, with “whatever time remains be served in community corrections.”

Livingston founded Breakaway, a non-profit, residential facility for women in recovery from addiction 2017. Currently, it houses 14 women from Southern Indiana, according to its website.

When reached by phone by the News and Tribune on Monday, Culotta called it not only a victory for her client — who has been in state prison for nine months — but “a victory for everybody who has suffered with addiction.”

“We remand to the trial court to issue a revised sentencing order consistent with this opinion,” the supreme court’s decision states.

Livingston pleaded guilty to five counts, including dealing and possession of drugs and the ingredients to make them, as well as an additional charge for being an habitual offender.

Livingston was arrested in 2013 in Paoli for possession of cocaine and over 5 grams of methamphetamine in baggies, an amount large enough to land her the dealing charge, according to News and Tribune archives.

In the original sentencing, Owen also ordered that Livingston be admitted into Indiana’s Purposeful Incarceration Program. If Livingston had been accepted into program — which was not guaranteed — and completed it, she could have been released from prison early for completing a substance abuse therapy program. She was already eligible to serve only half of her sentence if she exhibited good behavior.

Now, thanks to the opinion issued by the high court, Livingston could be released within the next few weeks and transferred to the care of the Floyd County Community Corrections program, Culotta said. However, the attorney stressed that no definite timeline for that transfer has been established.

“We won’t know, really, until just before she gets there (to Floyd County Community Corrections) that she’s on her way,” she said.

'A PRODUCTIVE MEMBER OF HER COMMUNITY'

Livingston’s original prison sentence made headlines not only because of the success of her own recovery efforts beginning in 2013 after her last arrest, but also for the work she had done to help other women in recovery by starting the BreakAway.

Her personal improvements, as well as her extensive efforts to help others better themselves, were cited by the state supreme court.

The decision says, in part:

“The evidence shows Livingston has committed no offenses since her arrest in August 2013 and has dedicated her time to becoming a productive member of her community and helping others who suffer from addiction.”

If Livingston violates the terms of her community corrections placement, “then the trial court may revoke the placement.”

A 'RARE AND EXTRAORDINARY CASE'

From the start, Culotta said she had high hopes that the higher courts would overturn the initial sentencing.

“You know, I’ve been doing this for 31 years, I was pretty confident that when it comes to a case that is rare and extraordinary, that this was it,” she said. “This was the case you don’t get to see very often.”

She said Livingston had already done a “self-imposed” rehabilitation.

“This wasn’t court ordered. This wasn’t Lisa being, you know, told you’ve got to go to rehab or anything along those lines,” Culotta said.

“This was Lisa going, ‘I’m done. This addiction is not going to kill me. I am going to beat it’ and, not just simply be self-absorbed in her rehabilitation, but truly she went 10 steps beyond and started her own rehabilitation house and ... pulled herself up by her own bootstraps — and then brought people with her.”

In a nod to the unique nature of this case, the opinion’s narrative said:

“We acknowledge that placing a defendant in community corrections for such a lengthy period is highly unusual. But we believe it to be appropriate in these unique circumstances, which include the willingness of Floyd County Community Corrections to supervise Livingston.”

Culotta is pleased the supreme court saw the same positive intent in Livingston as she herself saw.

“She wasn’t ‘building a resume,’ as was stated at the trial level. She wasn’t doing that,” Culotta said. “She was genuinely concerned about her community, and her future and the future of others. And that’s what the supreme court saw.”

The supreme court's decision, Culotta said, will have a ripple effect across the state because it's directing "all of the appellate courts and all of the trial courts" how to proceed.

"It’s so powerful. Not just for Lisa ... but it’s powerful for the entire system of justice," Culotta said.

"Because what it’s saying is, ‘If you pull yourself up and try to rehabilitate yourself, we will take note and we will sentence you justly. We are not just going to arbitrarily sentence you because we can. We’re going to look at the individual.’”

“That’s what the U.S. Supreme Court has been saying for decades. You know, it’s brilliant that it’s now here in Indiana in a state court opinion, by the supreme. They got it right.”