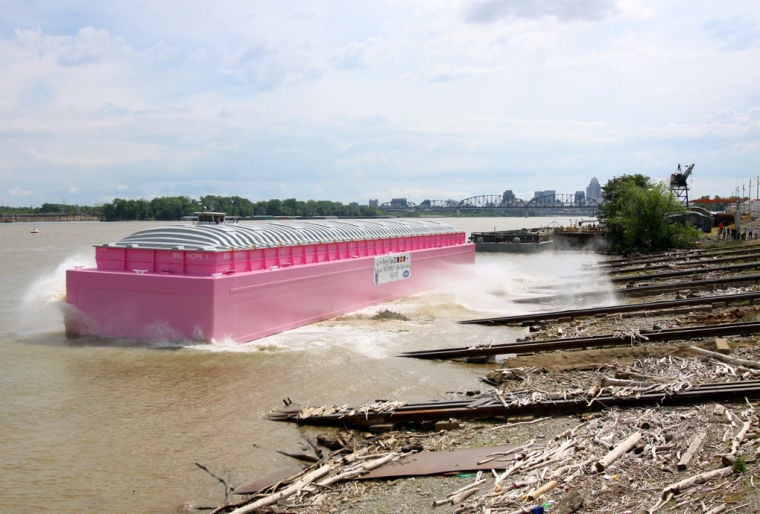 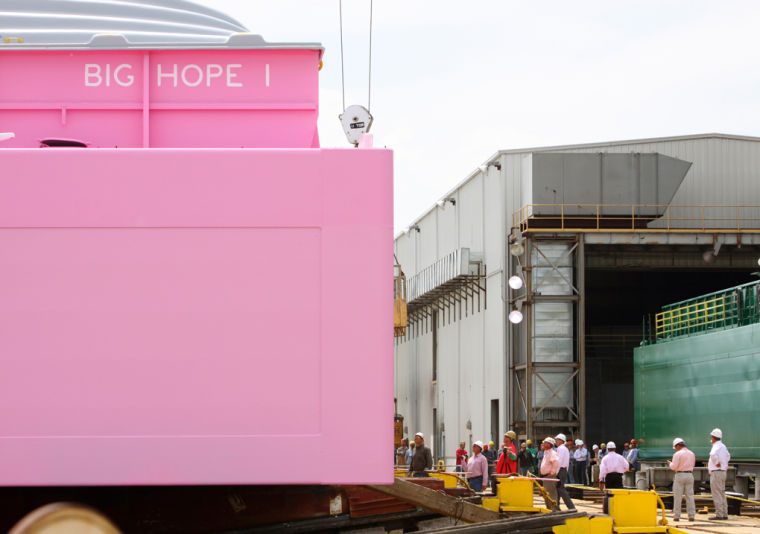 With the chop of some ropes and a few second slide, a symbol of awareness hit the Ohio River on Thursday afternoon.

“The color pink is the most recognizable color directly related to the fight to defeat cancer,” said Mark Fletcher, an owner of Ceres Barge Lines.

The idea to paint the barge pink, christened the “Big Hope 1,” was an idea of one of the company’s employees, Fletcher said. He added that he was initially hesitant to take on the project, but through an agreement by Jeffboat, along with the Sherwin-Williams Co., which donated 200 gallons of the pink paint, the barge was launched.

“This is kind of a way we decided to pay it forward and give back something that will hopefully benefit a whole lot of people,” he said.

Fletcher and Mark Mestemacher, a co-owner of Ceres Barge Lines, also pledged to donate a percentage of the barge’s net earnings each year to cancer research for at least five years.

In addition, Jeffboat has raised more than $1,600 to give toward cancer research.

“I just think it’s important what they’re doing in terms of raising awareness for all types of cancer and the research that goes into it,” said Megan Hedgepath, 29, who is a cancer survivor. “People don’t know how much it affects you and the people around you.”

Hedgepath was diagnosed with stage two non-Hodgkin’s lymphoma two years ago and is the daughter of a Ceres Barge employee. She along with Charlette Threlkeld, a former New Orleans port director and cancer survivor, and Kristen Nicholson, Jeffboat’s assistant controller and a cancer survivor, were the guests of honor and cut the ropes to launch the barge.

“I think the name alone is perfect for it,” Hedgepath said of the barge. “You can battle through it and survive.”

But the first and most obvious impression is the barge’s color.

“They’re going to know [what it stands for]; no question,” said Michael Eckart, business development manager with Sherwin-Williams.