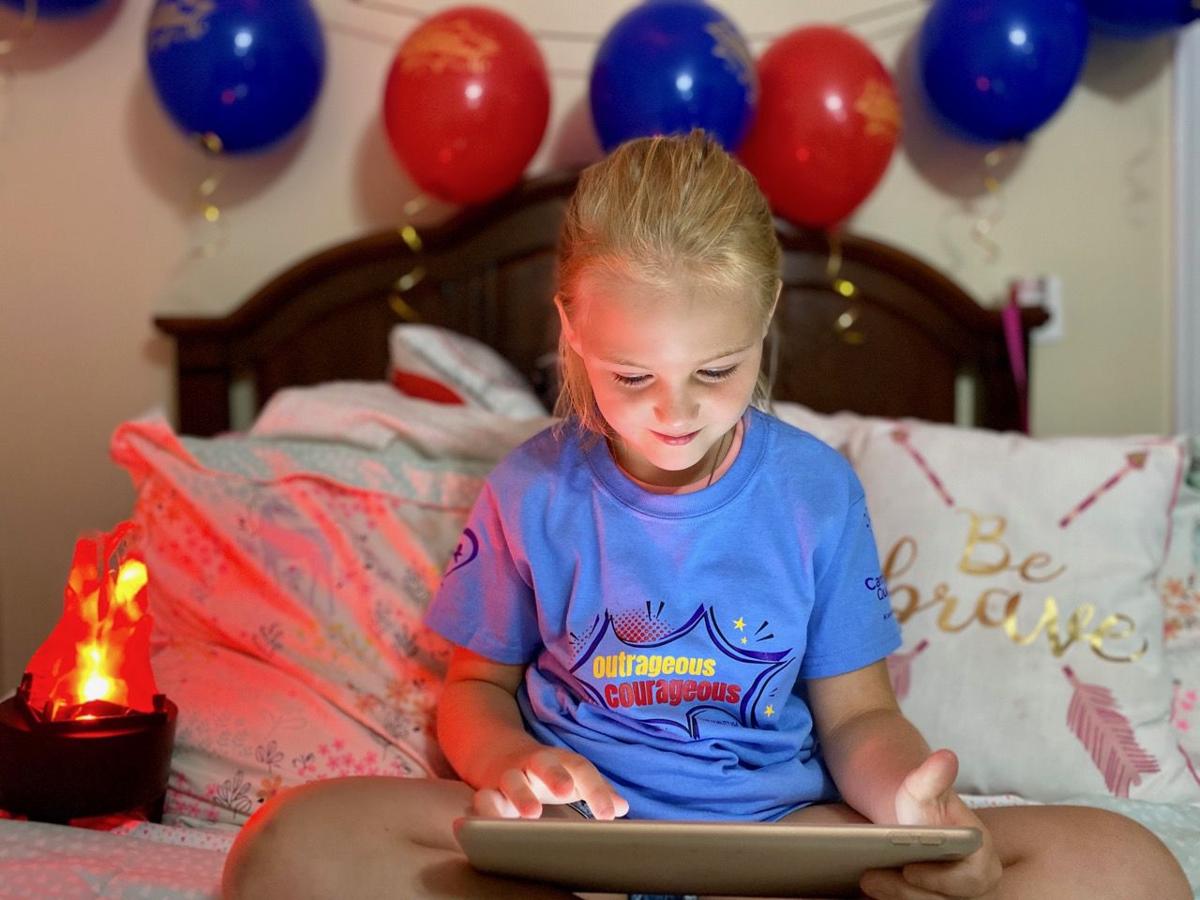 Addie Roberts, 9, participates in an online activity with Camp Quality Kentuckiana, a national camp for children who have dealt with cancer. The regional camp is typically held annually in Henryville. This year, organizers got creative and delivered bags of camp supplies to nearly 100 campers from all across Indiana and Kentucky. 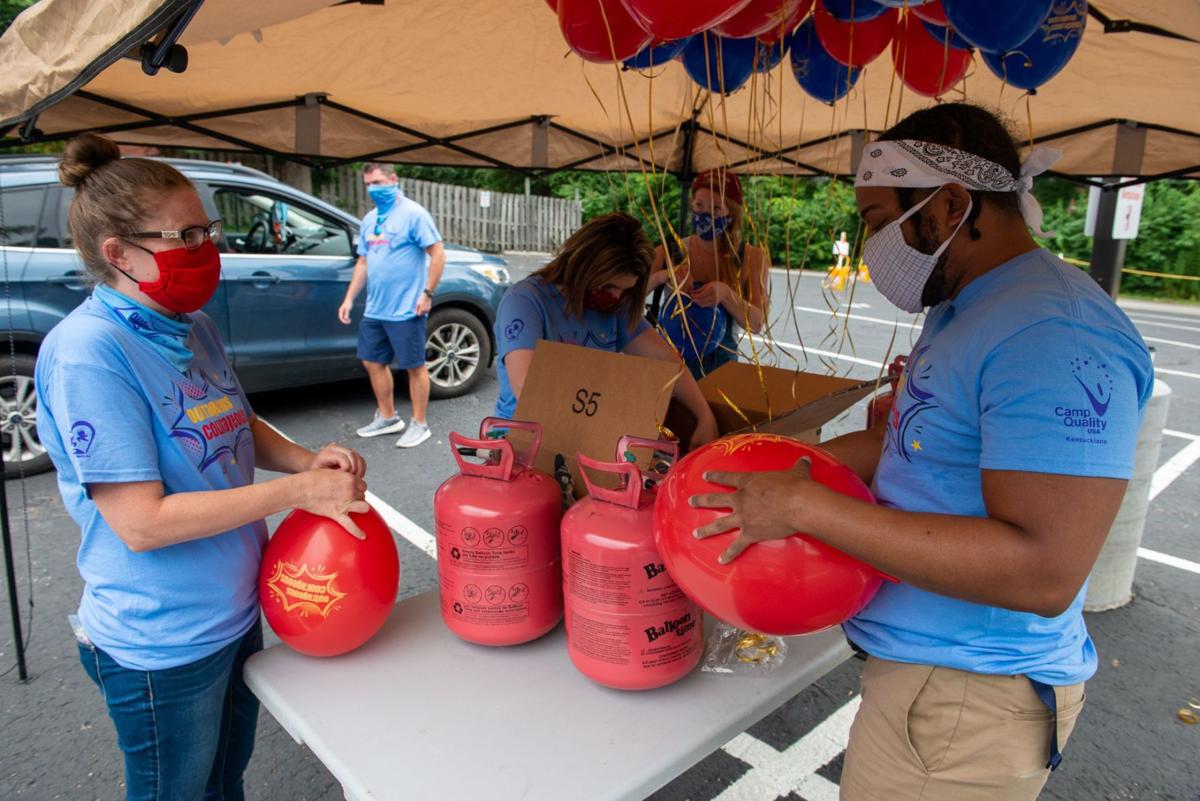 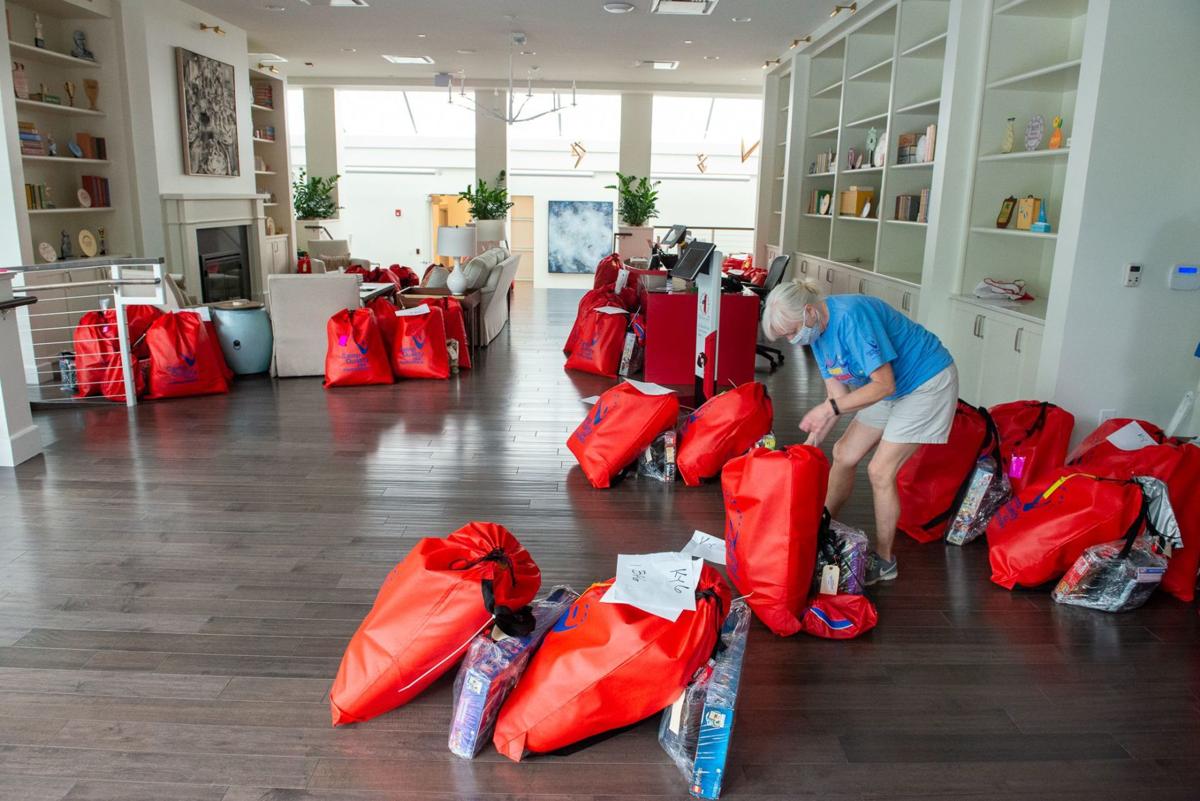 A volunteer is pictured with supply bags delivered this weekend to nearly 100 Indiana and Kentucky campers participating in this year’s Camp Quality Kentuckiana weeklong virtual camp. The organization was started in 1989 as a way to connect children who have experienced cancer.

Addie Roberts, 9, participates in an online activity with Camp Quality Kentuckiana, a national camp for children who have dealt with cancer. The regional camp is typically held annually in Henryville. This year, organizers got creative and delivered bags of camp supplies to nearly 100 campers from all across Indiana and Kentucky.

A volunteer is pictured with supply bags delivered this weekend to nearly 100 Indiana and Kentucky campers participating in this year’s Camp Quality Kentuckiana weeklong virtual camp. The organization was started in 1989 as a way to connect children who have experienced cancer.

SOUTHERN INDIANA — There’s a certain time of year 9-year-old Addie Roberts looks forward to more than most others — the week she spends in Henryville at Camp Quality, a weeklong summer camp for children who have or are dealing with cancer.

For Addie, who is a leukemia survivor, the camp was a way to bond with other kids who have gone through some of the same things and to just have fun.

“Literally this is her highlight of the year,” Addie’s mother, Angela Roberts said. “I really think she anticipates it more than Christmas.”

That’s why when the organization started making plans in March to have it virtually amid the COVID-19 outbreak, Addie was “heartbroken, to say the least,” her mother said. “They have so many activities.” These include zip lining, which Addie finally overcame her fear of last year.

But camp organizers have done more than just move activities online — they’ve been brainstorming for months on ways to make this the best possible experience for the kids for whom this camp means so much. Roberts said her daughter has been so excited about things they’ve done or have planned.

Eddie Bobbitt, executive director of Camp Quality Kentuckiana, one of 17 camps across the U.S. under the national umbrella, said while they have programing throughout the year for kids experiencing cancer, the ‘Superbowl,’ if you will, is our week of camp,” Bobbitt said.

The camp is for kids 5 to 16 years old who are dealing with cancer at varying levels — they may have finished treatments but have other complications, they may even been in active treatment. Organizers have all kinds of events for the campers, and pair them up with what’s called a Companion, a person over 18 who sort of becomes their best friend for the week and accompanies them to the activities they’re interested in, whether that be basketball, zip lining or other activities.

“We do everything we can to just let them be kids again,” Bobbitt said.

On Sunday, teams delivered huge bags of goodies to the nearly 100 campers around Indiana and Kentucky — things that would help them participate in the camp experience, like games, puzzles, T-shirts, S’mores kits. They even included things for siblings and parents, and things like gift cards for pizzas for the families, on what would traditionally be “pizza night” at camp.

Bobbitt said he was unsure if the kids would still be so excited to participate with the camp being online, but there has already been a huge response on their opening night.

“To have over 90 [campers] and almost every one of them on the call last night, it was like we were at camp,” Bobbitt said. “They were singing the camp songs and doing some of the traditions; it was really, really cool.”

Addie’s excitement for camp was reignited when the volunteers brought her camp supplies.

“She was still very excited to do it at home,” her mother said. “She could not wait to rip that open and find everything.”

Her bag included things to decorate her room — an annual tradition at the campgrounds — and a yoga mat for morning stretches. Campers even got a little electric light that looks like a campfire, so they could participate when they would typically be sitting around the fire at camp.

Addie’s mother said with the first meeting being over a Zoom call, she got to see her daughter sing songs with her friends.

“It was really cool to see her in her element,” Roberts said. She added that for Addie, this camp has been paramount in helping her and other kids who have gone through the same things and learn from one another.

“I think the best part of it is that it gives these kids a chance to connect with kids like them,” she said.