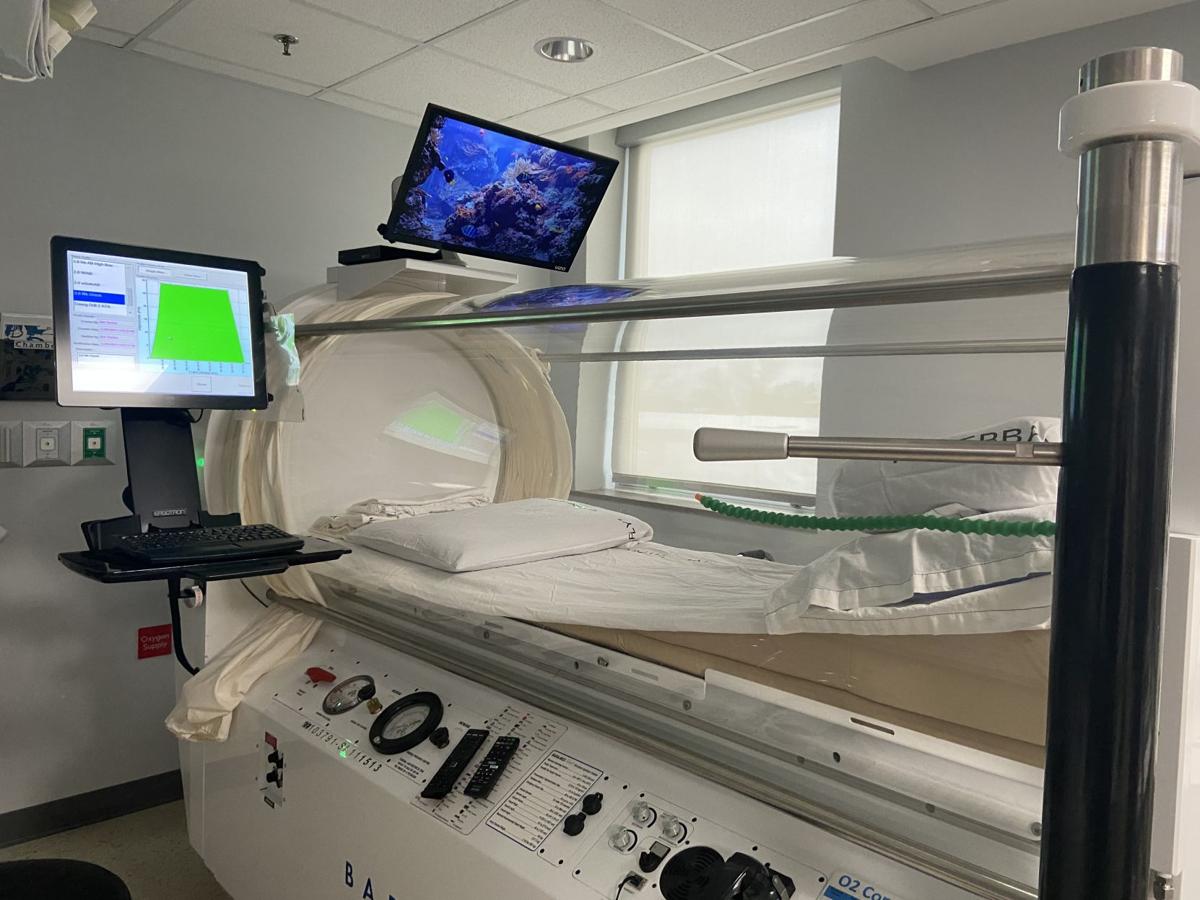 Clark Memorial Health is partnering with the Purdue Neurotrauma Group for a pilot study on the potential benefits of hyperbaric oxygen therapy (HBOT) for veterans with post-traumatic stress disorder or traumatic brain injury. The treatment involves one-hour sessions in a hyperbaric oxygen chamber.

Clark Memorial Health is partnering with the Purdue Neurotrauma Group for a pilot study on the potential benefits of hyperbaric oxygen therapy (HBOT) for veterans with post-traumatic stress disorder or traumatic brain injury. The treatment involves one-hour sessions in a hyperbaric oxygen chamber.

JEFFERSONVILLE — A local hospital is teaming up with a Purdue University research team to see whether a treatment program is a viable therapy option for veterans with post-traumatic stress disorder or traumatic brain injuries.

The Purdue Neurotrauma Group has selected Clark Memorial Health in Jeffersonville as the first medical provider to participate in a statewide pilot study to research hyperbaric oxygen therapy (HBOT) as a treatment for veterans diagnosed with PTSD or TBI.

The study will involve the treatment of 15 veterans over the course of a year. Clark Memorial and Purdue are in the process of recruiting veterans to participate in the program.

The veterans would go through 40 one-hour hyperbaric oxygen chamber treatments at the hospital, as well as a series of MRIs at Purdue University before, during and after the treatments — the travel expenses will be reimbursed by Purdue. Participants will not be charged for the MRI scans or HBOT.

The study is through a pilot program approved by the Indiana General Assembly in 2017.

Hospital officials felt the study would be an opportunity to help veterans in the community and surrounding areas, she said.

“We hope this is just the beginning of something great that will benefit anyone who suffers from PTSD and traumatic brain injuries,” McIntosh said.

Through HBOT, patients breathe pure oxygen while laying in clear, pressurized chambers. The air pressure is about two-and-a-half times higher than normal atmospheric pressure, and the lungs can gather more oxygen than possible at a normal air pressure.

Indiana is the only state to fund a pilot research study for HBOT, and it is one of only seven states that have passed legislation for HBOT.

Art Terlep, a graduate student in the Purdue Neurotrauma Group and a former U.S. Air Force captain, said although there are studies on using HBOT to treat brain injuries, there hasn’t been anything using the type of imaging technology being used in Purdue’s study, and there has not been a solid body of physical evidence collected. Some studies have shown quality of life improvements in TBI and PTSD patients who went through the treatment.

The evidence from Purdue’s pilot study will be a valuable set of data to collect, he said.

“This is a big deal,” Terlep said. “The data that we get from this will help inform other future studies and other grants that we go for in the future related to this. This is the data set that you keep adding and piling onto and say, OK, we’ve started from this, we’ve seen what this can do, now what else can we discover from it.”

Terlep said the Purdue Neurotrauma Group has been analyzing traumatic brain injury for years, including studies on concussions in contact sports athletes. They expect the new HBOT study to be useful for comparison studies on various forms of brain injuries.

Bob Thacker, the hospital’s Hyperbaric Safety Director and U.S. Marine veteran, said this study has the potential to set a precedence stretching beyond the local area in terms of PTSD and TBI treatment.

The team at Purdue and Clark Memorial “be on the ground of groundbreaking discoveries” with the HBOT study, he said.

“[PTSD/TBI] is a widespread problem, especially for our combat veterans,” Thacker said. “But there really is no effective, aggressive treatment for this group of people. We’re not guaranteeing that we’re going to see positive results. But the only way we’re going to know is to actually be able to afford this opportunity. We’re fortunate that the state of Indiana has provided a grant so we can get these people possibly appropriate treatment.”

Although the study involves quite a bit of commitment from the participants, he emphasizes the possible benefits to veterans taking part in the study.

“You’re not only helping yourself, you’re helping future veterans as well,” Thacker said. “Combat and military is not going away, so these people are not only helping themselves, but they’re going to help other veterans. So all we need is a few in here to get started, and if we can start getting information, that may encourage more to get in here.”

McIntosh said she looks forward to seeing the progression of the program at Clark Memorial in upcoming months and years.

“It’s really important to me to be a part of this program,” she said. “I feel like it’s an honor for me to be in a position to help individuals potentially get their life and their families’ lives back to some sort of normalcy.”