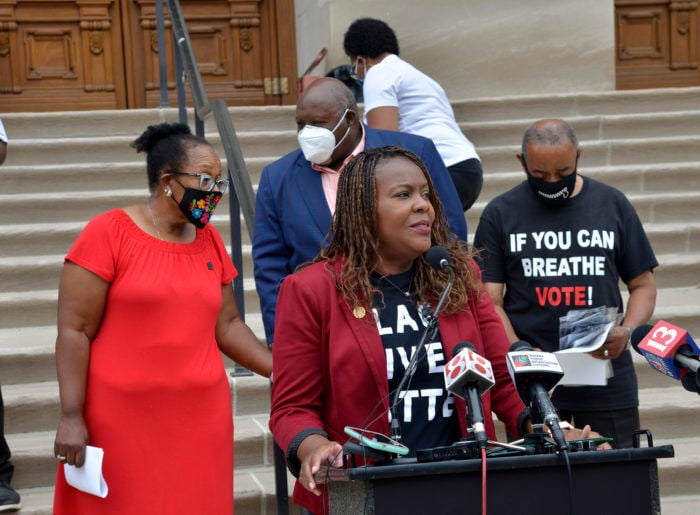 State Rep. Robin Shackleford, D-Indianapolis, unveiled the initiatives the Indiana Black Legislative Caucus will pursue in the 2021 session of the General Assembly. 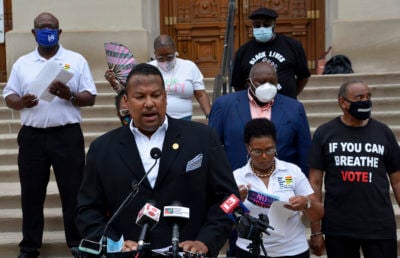 State Rep. Robin Shackleford, D-Indianapolis, unveiled the initiatives the Indiana Black Legislative Caucus will pursue in the 2021 session of the General Assembly.

State Rep. Robin Shackleford, D-Indianapolis, and chair of the IBLC, led her members at a news conference at the Statehouse Thursday where they proposed changes that would lead to a rethinking of the way Indiana handles police conduct instead of abolishing the system.

Shackleford was clear that she was not talking about refunding the police, stressing that communities need effective law enforcement. But the changes proposed are in response to the deaths of Black Americans at the hands of police.

She said the changes proposed “directly affect our communities by enacting systematic change that will prevent, mend, and hinder greatly any future abuse that may be inflicted upon our community in the future.”

Items on the agenda include removing police officers from schools and replacing them with more social workers; develop local police policies that call for restraint on SWAT deployments; automatic external investigations of the shooting of unarmed civilians; require police to live in the communities they serve; and provide for more mental health testing of police officers.

They also want studies conducted on racism as a health crisis and the juvenile justice system as well as improved training for law enforcement officers.

An IBLC member will take charge of individual agenda items to decide how to accomplish each goal, whether through legislative amendments or new bill drafts, and to make sure it gets done. The goal is to decide how to approach each issue in the next few months so they can make it to the floor in the next legislative session, which begins in January.

When developing the agenda, the IBLC collaborated with groups and individuals from many areas. They consulted with Gov. Eric Holcomb, police officers and sheriffs, prosecutors, families of police brutality victims, IBLC stakeholders and 13,000 individuals across the state who attended town hall meetings on the subject. They worked to include concerns from the various groups to address everyone’s concerns and to improve relations between law enforcement and communities.

Rep. Earl Harris Jr., D-East Chicago, and vice chair of the IBLC, said that state and local law enforcement supported many of the agenda items, like requiring body cameras on all officers and creating a more reliable forum for citizens to report misconduct.

“One of the things that we are happy about is when they’ve come and wanted to meet with us to talk about these agenda items,” he said, “they have had similar things on their list as we do and have asked us to please help them support those things.”

The IBLC has pushed Holcomb for months to sign executive orders banning the use of chokeholds in arrests, racial profiling and no-knock warrants. They also have asked that he form a commission on justice reform and set penalties for officers who turn off their body cameras.

Shackleford said he has politely and actively listened to the group’s concerns and responded positively, but hasn’t followed through with action. Holcomb’s press secretary said the IBLC request is being reviewed.

Some of the issues on the IBLC agenda have been raised before. The General Assembly passed a hate crimes bill in 2019, but critics have said that it doesn’t go far enough to protect some groups, like those in the LGBTQ community, while efforts to decriminalize marijuana laws have repeatedly failed.

Sen. Greg Taylor, D-Indianapolis, said IBLC members believe they may have a chance in the Republican-dominated legislature because GOP lawmakers are now hearing outcry from their constituents after some high-profile deaths of African Americans by police.

“We believe today is different, and we believe that now is the time,” Taylor said. “And if (Republicans) don’t, then we believe that the communities that we all represent…will express their concern in the voting box.”

Andrea Rahman is a reporter for TheStatehouseFile.com, a news website powered by Franklin College journalism students.