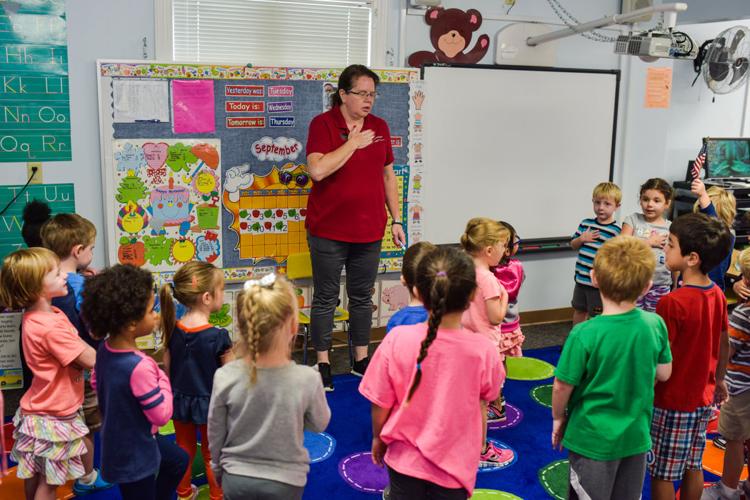 Preschoolers practice the Pledge of Allegiance during day care at the IU Southeast Child Care Center on Wednesday. 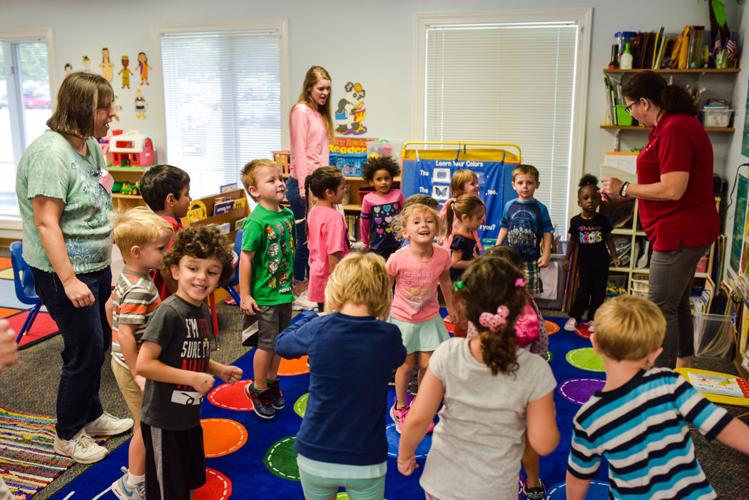 Preschoolers wiggle their "wigglies" out during an exercise at the IU Southeast Child Care Center in New Albany.

Preschoolers practice the Pledge of Allegiance during day care at the IU Southeast Child Care Center on Wednesday.

Preschoolers wiggle their "wigglies" out during an exercise at the IU Southeast Child Care Center in New Albany.

FLOYD COUNTY — More than 40 preschoolers are in a classroom this fall and there’s room for over 50 more thanks to a pilot program by the state.

On My Way Pre-K started in 2015 with eligible five counties. Last summer, it was announced that the pilot program would be expanded to 15 more counties, including Floyd starting the 2018/19 school year.

According to Erica Woodward, project manager of On My Way Pre-K, families in Floyd County who want to use the program have 20 providers to choose from.

To be eligible, families must make less than 127 percent of the Federal Poverty Level, have an annual income of just under $34,000 for a family of four, reside in Floyd County and the parents must go through job training, working or taking classes while their child is in school.

More than 130 families initially applied, but not everyone followed up with the next step according to Woodward.

For those families, it’s not too late but they need to get in touch as soon as possible to take advantage of the program.

Melissa Hagler, acting director of The Miracle Zone II in Floyds Knobs, said her center decided to offer the program to bring preschool to families “who otherwise would not be able to afford it, to make sure their child would get it.”

“I’ve been in this business 30 years and I believe in the children. You have to be there to help them to get their start,” Hagler said.

The IU Southeast Children’s Center also participates in the program, something that offers non-traditional students more options, according to Seuth Chaleunphonh, Dean of Student Life.

“It’s needed to make a difference with every student,” Chaleunphonh said. “Indiana needs a more college-educated workforce. We are not just tapping into high school graduates.”

The program is intended for Floyd County families, but Pam Ottersbach, director of Regional Community Impact for Metro United Way, says "our goal is to provide a high quality pre-school experience to as many children as possible."

In an email, Ottersbach wrote that families in Clark County who have children in the New Albany-Floyd County school system or are employed by the schools are welcome to apply, too. Even those who aren't connected to the system can apply she wrote, noting "we review these applications on a case by case basis."

Though only about half of the available spots have been claimed, Woodward said she’s happy with the response to the program so far.

“I think On My Way Pre-K, in years to come in Floyd County, will continue to grow. We will see more providers come on board, take On My Way Pre-K funding. I think we have a great future ahead of us,” Woodward said, noting that she was particularly happy with the initial amount of applicants and that she hopes to see more follow-through with the process.

“Once you apply it does not end there,” she said.

Erin Walden is the education reporter at the News and Tribune. Contact her via email at erin.walden@newsandtribune.com or by phone at 812-206-2152. Follow her on Twitter: @ErinWithAnEr.

Erin Walden is the education reporter for the News and Tribune. She studied journalism at the University of Cincinnati. Send tips and story ideas to erin.walden@newsandtribune.com.

Tuesday evening, the Clark County Health Department held a panel discussion with health experts to discuss what parents should and shouldn't do to deal with the shortage.

Baptist Health Athlete of the Month