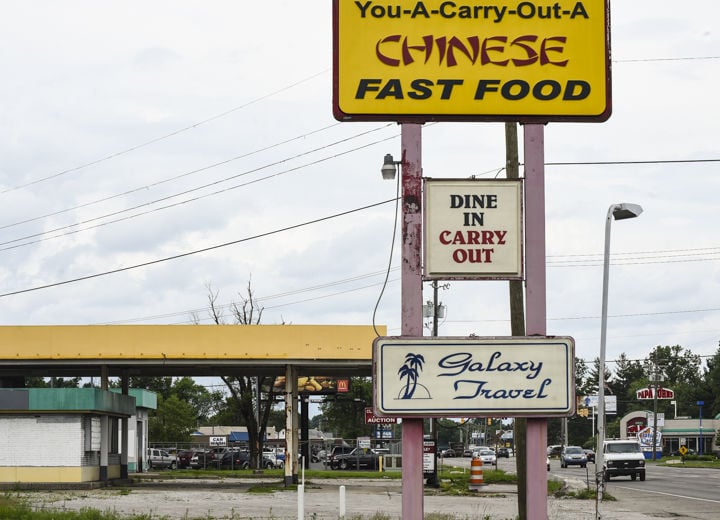 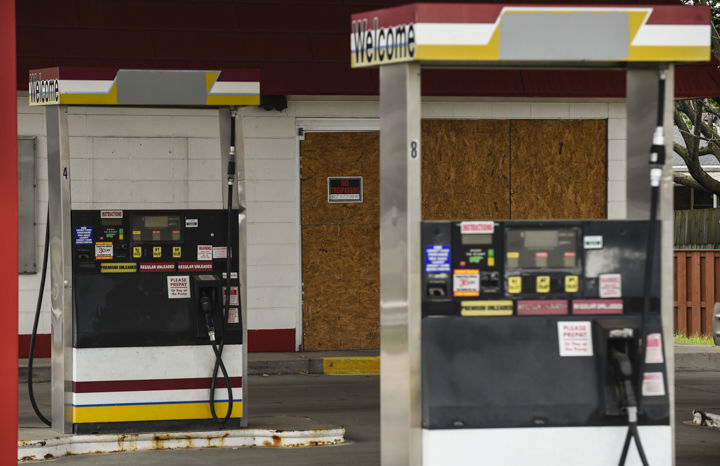 Pumps remain at a former gas station, adorned with boarded windows and doorway on 10th Street in Jeffersonville. Of the 22 total vacant or unused properties along the 10th Street corridor, nine were preexisting developments zoned for commercial use. 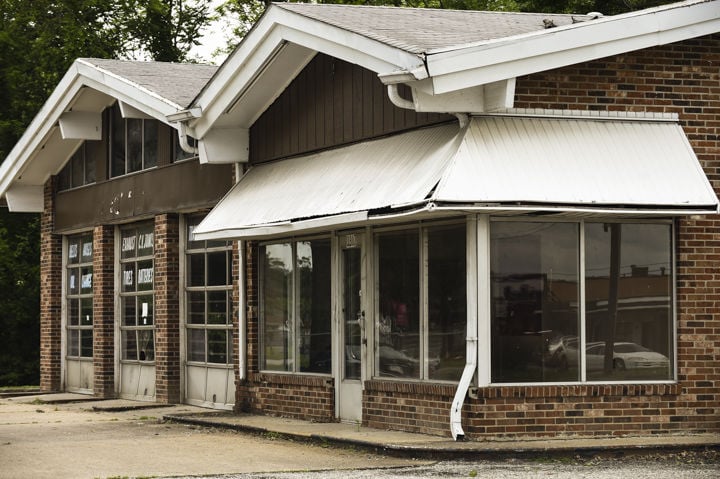 A former service station fills the lot on the corner of 10th and Main Streets near Quartermaster Depot in Jeffersonville. Properties that once operated as gas stations often bring added expenses to developers, due to environmental testings and potential clean ups, which may lead many to look elsewhere.

Pumps remain at a former gas station, adorned with boarded windows and doorway on 10th Street in Jeffersonville. Of the 22 total vacant or unused properties along the 10th Street corridor, nine were preexisting developments zoned for commercial use.

A former service station fills the lot on the corner of 10th and Main Streets near Quartermaster Depot in Jeffersonville. Properties that once operated as gas stations often bring added expenses to developers, due to environmental testings and potential clean ups, which may lead many to look elsewhere.

JEFFERSONVILLE — Like bones, remnants of once-thriving businesses stripe the horizon along 10th Street in Jeffersonville, reminders of what the corridor once was.

It's the gas station pumps that haven't fueled cars for years at Main Street, with a half-empty sign post boasting old prices and a graffiti tag.

Or the dandelion yellow "You A Carry Out A" Chinese restaurant sign with red and black lettering advertising a business that's been closed for a year and a half.

"When you [look] around 10th Street — many many vacancies," Ella Murphy, owner of the Chinese restaurant property, said.

Retired petroleum industry businessman Charlie Miller supplied gasoline to the now closed service station on Main Street, right next to Youngstown Shopping Center. He remembers when the block was a hub of activity.

"That used to be a very busy shopping center right next door to where we're at on 10th Street," Miller said. "It's open now, but it's not anywhere what it used to be."

"Is anybody satisfied with 10th Street? No," Northaven subdivision resident Kenneth Applegate said. "I would say most people have the same view."

But what these business bones won't tell you is the growth in the corridor's future.

Although 10th Street hasn't yet returned to its glory days, local experts say a renaissance is inevitable — and hints of change have already begun.

Two massive plots of land across from one another just south of Interstate 265 have been grabbed by developers for future retail centers.

Perhaps the commercial corridor's biggest hurdle is its vacant or abandoned properties, treated as investments by owners who anticipate growth from the Ohio River Bridges Project and the 10th Street widening project.

"There isn't anything that time and money can't fix," commercial real estate agent Jim Baker said. "It's just going to take time. I know people want things to happen quickly. We live in a society where we expect things now.

HOW DID WE GET HERE?

Anticipating a shift of focus to 10th Street revitalization, Jeffersonville Planning and Zoning Director Nathan Pruitt has mapped a rough estimate of infill, or inactive properties.

Pruitt estimates between Spring Street and I-265, 10th Street has 22 vacant or unused properties. Thirteen of those are greenspace and nine are properties with preexisting development, such as former gas stations or empty homes zoned for commercial use.

The road's missing teeth are clustered in four main nodes — near Quartermaster Depot, between Nachand Lane and Oaklawn Drive, around Woodlawn Court and Oakridge Drive, and near Vissing Park.

As Jeffersonville has pushed its boundaries toward River Ridge Commerce Center, businesses have left their locations close to downtown to rush east, where developments pop up like weeds in anticipation of the east-end bridge, or elsewhere.

"The older [a property] gets, the more of a hassle it is both in terms of money and time to upkeep it," he said. "So instead of updating a Shell Station [for example], that owner could buy a piece of land for much less sum of money, go out and be close to all the new development."

What's left behind are properties that aren't cheap to redevelop — land that needs environmental studies to determine potential contaminants from gas stations, or structures that need renovations or demolition.

"In a lot of development real estate check lists, those are some of the first due diligence questions — was it a former gas station and has a phase 1 [environmental study] been done?" Pruitt said. "And if those are checkmarks in the ‘no’ column, most people move on. They find the next lot, because it’s too much of a risk for them to potentially come across thousands and thousands of dollars of cleanup, and they just don’t want to deal with it."

Leapfrogging is a phenomenon that compounds itself — once one business leaves, property values decrease and more adjacent businesses close and post 'for sale' signs.

It's what happened to You A Carry Out A.

"The business was going down because of a lot of vacancies along the area," Murphy said, mentioning Long John Silver's and a nearby gas station that no longer operate.

A businesswoman herself, Murphy said she's waiting until an offer that meets her standards comes knocking on her door. She's received plenty of inquiries.

"I'm very choosy," she said. "I'm hoping the city will develop 10th Street so I have some idea of how I'm going to develop my property."

She's got the same idea as many other property owners, some who are holding on like they would stocks.

Essentially, they're just waiting on each other.

Storage Express bought land across the street from its current facility on 10th Street as an investment property. Tom Clark, vice president and field service director, said the business has no intention to build more units across the street.

"We're going to sit on it for several years and see what's going on along the corridor," Clark said.

Miller, who owned Miller Oil Company Inc., bought the former gas station along Main Street from his friend, who retired at the time of the purchase. Miller has owned the property about four years now and hopes to make a little profit when he sells.

The investment opportunity is what attracted Miller to the property, knowing the growth to come from the Ohio River Bridges Project.

"I was just going to sit on it for a while and see what kind of response I got," he said.

Miller is now working with a tenant in the same industry as the property's former use but was halted by the city's six-month moratorium on new automotive businesses.

Many factors drive the sales of vacant or unused properties, Baker said.

" ... What people do, they latch onto something down the street that sold for a high price because they think theirs should sell for that," he said.

WHERE ARE WE GOING?

Despite somewhat of a stalemate in unused property sales, Baker isn't doubtful 10th Street will see a boom again.

"You can find users for any locations, it just depends on whether the owners of the property are motivated enough to sell at the price they need to, whether the municipalities will allow that potential use," he said.

Private development is following public investment, Pruitt argues. Along with the two new bridges, businesses will find 10th Street attractive again because of the $18 million widening project, which will add a center turning lane and sidewalks to a large segment around the end of 2018.

Eventually, the most desirable locations in Jeffersonville will be fully developed, and 10th Street will be the only place left.

"If something good happens let's say between [I-265] and Allison Lane, I think we’re going to have progressive creep toward [Interstate 65] the other direction," Baker said. "Those retailers, those users are going to say, 'well I can go down here a couple blocks and maybe for a little less money, I can get what I’m looking for.'"

Until that happens, there are a few things the city can do to help the cause, Pruitt said. That may include facade improvement grants for existing businesses, conducting environmental assessments on brownfields and even buying property to market for a specific use.

"I think it will take more thinking, more investment and more time and commitment beyond just the road project to really get it going," Pruitt said.

Baker, on the other hand, prefers the market dictate commercial growth.

" — As long as its an attractive use and it doesn’t cause any sort of adverse effects on the neighborhoods and the people that live there, but sometimes politicians I think overreach, and that’s just from a broker’s perspective," he said.

Current business owners on 10th Street can also do their part. Huber's Auto Sales, for example, bought the abandoned Sonic property next door to expand his business. Before then, the property held the roofed poles of the old drive-in.

"There's got to be something there for people to stop and shop and eat at, but there's nothing there commercially developed," he said.

Change is already happening. Pruitt has crossed off six or eight vacant or unused properties from his map since he first created it a year ago, while development all over the city is soaring forward.

"We are developing at a breakneck pace right now," he said of Jeffersonville as a whole.

Miller, who's spent his career watching the market shift, sees it too.

"I feel like it's going to be a good area for future growth if it's controlled," he said.