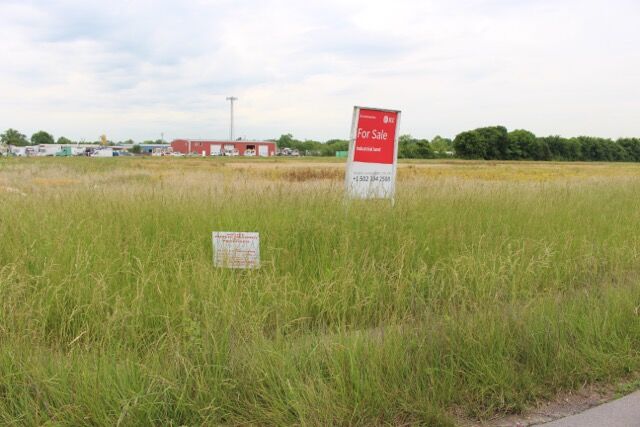 This 17-acre plot of land on Progress Way in Clarksville, last home to Hap’s Airport 40 years ago, was this week rezoned from industrial to multifamily residential, with potential plans for a 240-unit workforce housing apartment complex. 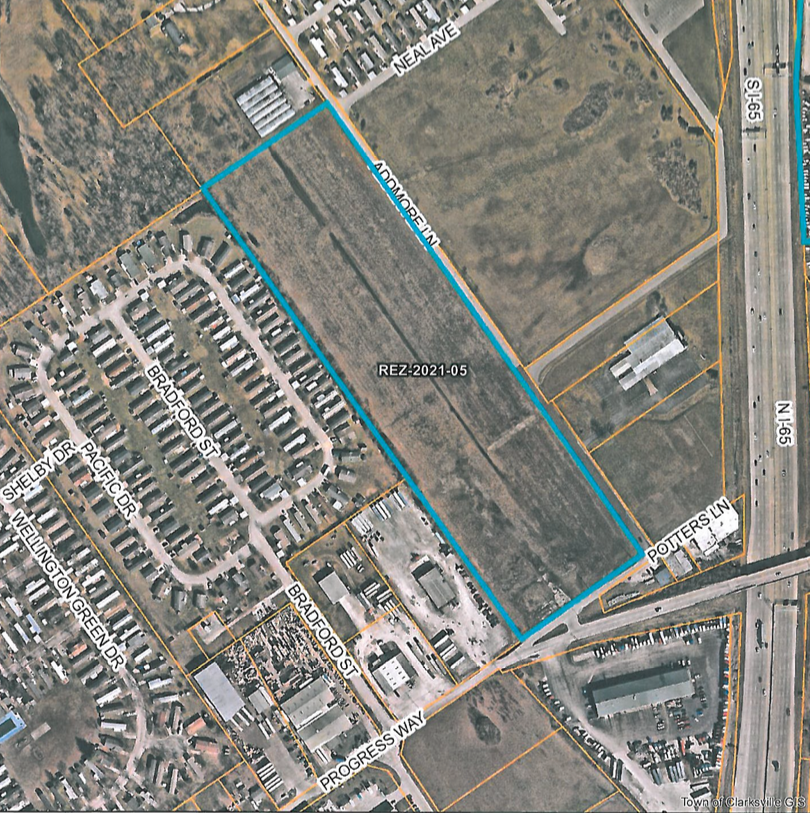 The outlined area represents a 17-acre plot of land the Clarksville Town Council formally rezoned Tuesday from heavy industrial to multifamily residential. A developer is planning for a 240-unit workforce housing apartment there. Clark County GIS

This 17-acre plot of land on Progress Way in Clarksville, last home to Hap’s Airport 40 years ago, was this week rezoned from industrial to multifamily residential, with potential plans for a 240-unit workforce housing apartment complex.

The outlined area represents a 17-acre plot of land the Clarksville Town Council formally rezoned Tuesday from heavy industrial to multifamily residential. A developer is planning for a 240-unit workforce housing apartment there. Clark County GIS

CLARKSVILLE — Although in the early stages, a 17-acre property near Clarksville’s largest commercial hub is seeing the first signs of movement in four decades.

On Tuesday, the Clarksville Town Council voted 5-2 to approve the rezoning of a lot at Progress Way and Potters and Addmore lanes from I-2, heavy industrial, to R-3, multifamily residential.

The vote comes after a rezoning request was submitted earlier this year by Louisville-based company SOCAYR, Inc. which hopes to invest an estimated $48 million to build a 240-unit workforce housing development there. The Clarksville Plan Commission approved the request 4-2 earlier this month, and passed it to the council with a favorable recommendation.

The rezoning application, which notes the potential project as a “thoughtfully-designed community,” lists it as having a mix of one-, two- and three-bedroom apartments, with walk-out balconies, dishwashers, microwaves and washer and dryer hookups.

As workforce housing, rent would be geared toward teachers, first responders, service and industrial employees and other essential workers.

Before that happens, it will need to be approved by the technical review committee and plan commission, then apply for the proper building permits.

Before Tuesday’s vote, Josh Hooper, vice president for development at Beacon Property Management, which oversees SOCAYR, addressed the council on how the project will benefit the area.

On the conditions of the site, which is adjacent to industrial companies, mobile home parks and other residences, “that’s an easy one,” Hooper said. “It’s vacant, it’s perfect for housing of this type.”

“We really think this development fits ‘smart growth’ to a T,” he added. “This is infill development that’s adjacent to existing utilities, jobs, shopping, recreation...so it’s a positive to the residents who live there and we think it will also be a positive for the community of Clarksville.”

The site was previously used by Hap’s Airport, which closed in the early 1980s, according to notes from the May 5 plan commission meeting. In 1982, the airport and property owners successfully petitioned the town to change its zoning from R-1 to I-2, with the petitioners stating that “I-2 zoning will be attractive to any business trying to locate in Clarksville.”

But for the past 40 years, that hasn’t happened.

Other than some buildings razed in 2006 that Clarksville staff believed were possibly for some type of industrial use, the lot has been vacant since the airport left.

This is why some of the Clarksville members who voted for the rezoning say they did so.

Mike Mustain, who’s both on the council and the plan commission, said he has heard both sides and that “it is my firm belief that this is the best use of the land and it protects property owners the most.”

“The way it’s zoned right now, an aggregate stone-crushing company could come in and they [could] make some noise, they’ve got big trucks, they’ve got everything that [residents] don’t want.”

Council member A.D. Stonecipher said in an email that current laws limiting a municipality’s ability to either raise property or sales taxes have made cities and towns more dependent on its residents’ income taxes.

“Given that Clarksville’s borders are locked; and, given the high demand for additional housing in Clark County, it is in Clarksville’s long-term, best interest to identify reasonable locations for small pockets of residential density, at a variety of price-points,” he said in the email.

“We can strike a balance between maintaining Clarksville’s iconic and historic neighborhoods with buffered pockets of well-managed apartments...[and] I am confident that the Planning Commission and Planning Department will hold the current landowner to high standards of construction, safety, and aesthetics in the near future.”

But some local residents who spoke during public comment have concerns.

One man, who is a resident and operates a nearby mobile home park, said he doesn’t know how a property of that size can be built there without affecting drainage in the area, and that no one has discussed it with him.

“No one has told me where the sewer is going to go, let alone the surface water,” he said.

Another man spoke saying he was worried at the lack of infrastructure in that particular area, specifically for children who may be walking along Progress Way.

“We don’t think the roads are adequate now,” he said. “There’s no sidewalks, there’s dropoffs everywhere and there’s drivers everywhere so I think that needs to be addressed.

“Our concern is for the children.”

Clarksville Town Manager Kevin Baity said the town is about 30%-35% through the design portion of a $3 million to $4 million Progress Way improvement project, but council member Jennifer Voignier, who voted against the rezoning, said that until that’s done, there shouldn’t be more residential units being discussed.

“I just think it’s premature and it’s not time yet,” she said.

As far as wastewater, Baity said there is already a local line that has the capacity for a development of this size and one or two others.

Stormwater would be handled by the engineer and developer, and all infrastructure aspects must be approved by the town. Baity said the town is working up preliminary cost estimates for some road improvements in the immediate vicinity.

Other project developers who spoke at the meeting wanted to assure both the council and the public that the project would be handled professionally, from design and infrastructure to long-term maintenance.

“I really think the [town] of Clarksville would really enjoy us as developers, owners and managers but most of all we look forward to being your neighbor and your friend,” said Chris Redmon, CFO and vice president of physical assets at Beacon Property Management.