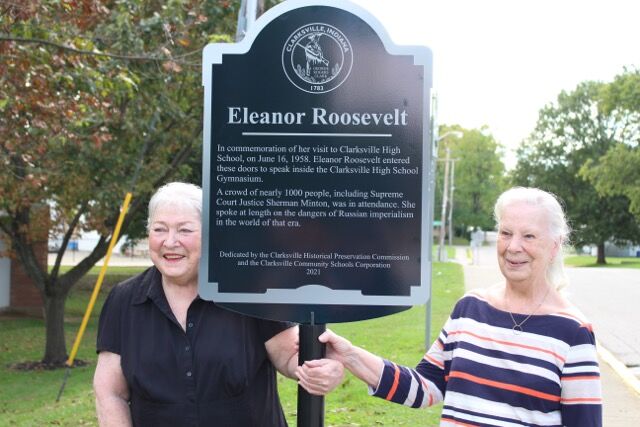 Nancy Gilbert, left, and Darlene Pelayo were both recent Clarksville High School graduates when they helped serve dinner to the 1,000 who attended Eleanor Roosevelt’s speech in 1958. 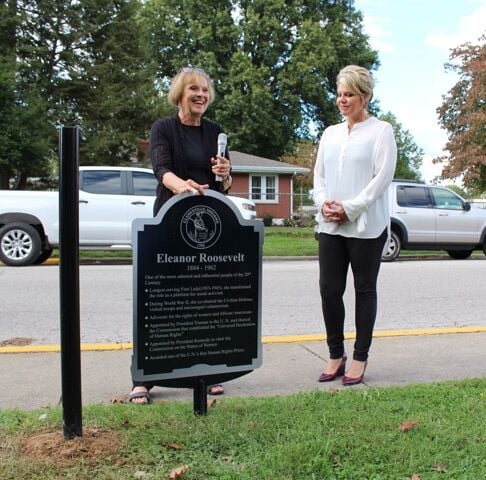 Lynn Lewis, left, chairperson of the Clarksville Historical Preservation Commission, and Tina Bennett, superintendent of Clarksville Community Schools, prepared to install a plaque at the school Thursday to commemorate Eleanor Roosevelt’s 1958 visit to the high school. 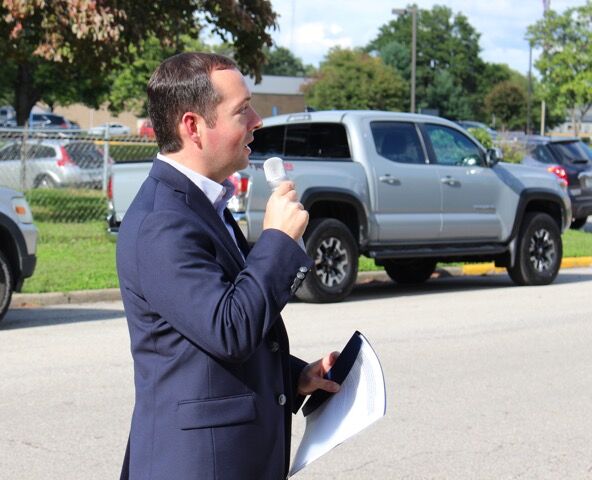 Nancy Gilbert, left, and Darlene Pelayo were both recent Clarksville High School graduates when they helped serve dinner to the 1,000 who attended Eleanor Roosevelt’s speech in 1958.

Lynn Lewis, left, chairperson of the Clarksville Historical Preservation Commission, and Tina Bennett, superintendent of Clarksville Community Schools, prepared to install a plaque at the school Thursday to commemorate Eleanor Roosevelt’s 1958 visit to the high school.

CLARKSVILLE — In 1958, months after a visit to study the systems of the Soviet Union, former U.S. First Lady Eleanor Roosevelt addressed a crowd of 1,000 people in the gymnasium at the newly-built Clarksville High School.

The event was the annual meeting of the Clark County Chamber of Commerce but rather than speak on commerce or business, Roosevelt outlined her findings from her trip overseas, where she’d spoken with government officials, business owners, and, in some cases, regular citizens to find out more about life in the Soviet Union.

“She spoke for an hour and gave all her reasons why she felt Russia and the Soviet Union were a grave danger at that time,” said Lynn Lewis, chairperson of the Clarksville Historical Preservation Commission. That included the U.S.S.R.’s focus on early childhood education, which at that time surpassed what the U.S. was doing.

Lewis was among several who spoke outside the school’s gymnasium Thursday afternoon, as community members and school and town representatives gathered to dedicate the plaque to commemorate the First Lady’s visit — a partnership between the historic commission and Clarksville Community Schools.

Her words and actions had impact rarely acknowledged of women of that time in history.

“The United States has had 43 First Ladies, but I think it’s arguable to say that Eleanor Roosevelt is the first among equals in that group,” Lewis said. Roosevelt was the longest-serving First Lady, the first to have a daily newspaper column, weekly radio show and monthly column in the Ladies Home Journal. She was the first to give a news conference, and, often during the 347 that followed, she would grant questions to female reporters first.

She was the first to speak at a national political convention and after her husband, President Franklin D. Roosevelt, passed away, the former First Lady became the first U.S. delegate to the United Nations, later writing the Human Rights Resolution.

“Eleanor Roosevelt was a major historical figure and I don’t think a lot of people knew about her visit and her speech here on our very own campus,” said Clarksville Community Schools Superintendent Tina Bennett.

Wren Barnes, a 14-year-old student who wrote the news release for the Thursday event and attended it, said they were very interested in details of the more recent historical figures, such as Roosevelt and John F. Kennedy.

Two women who were students at the time of Roosevelt’s visit and part of the team that served dinner that night were also at the dedication, remembering that special night.

Nancy Gilbert and Darlene Pelayo had just three weeks before the visit been among the first class to graduate from Clarksville High School. Although they didn’t meet her in person, they recalled the excitement and importance of hearing her speak.

Gilbert called it “fantastic — I’ve never forgotten it,” she said. “She was just absolutely a marvelous speaker, and it was so interesting that she spoke of early childhood education and how children [in Russia] were educated much earlier than we educated them here.”

The plaque dedicated Thursday isn’t the permanent one — it’s a placeholder until the real plaque, which has been delayed due to the pandemic, can be completed.

Clarksville Town Council President Ryan Ramsey said the ceremony and the recognition of the First Lady’s visit is just another piece in the renewed focus on telling the town’s stories. He thanked both the school system and the historic commission for “helping spotlight an important moment in our town’s history, one that deserves to be told for countless generations.”

Ramsey also included a quote from the eloquent Eleanor Roosevelt, which exemplified her encouraging philosophy.

“Surely in the light of history, it is more intelligent to hope rather than fear, to try rather than not try,” Ramsey read. “But one thing we know beyond all doubt: nothing is ever achieved by a person who says it can’t be done.”