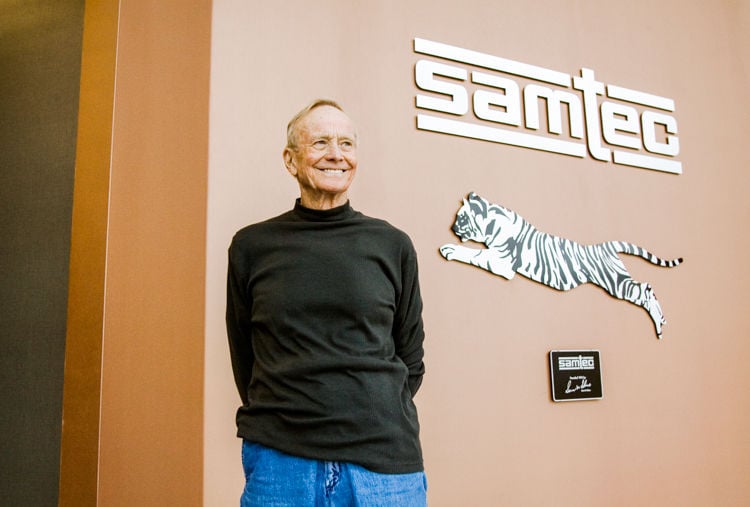 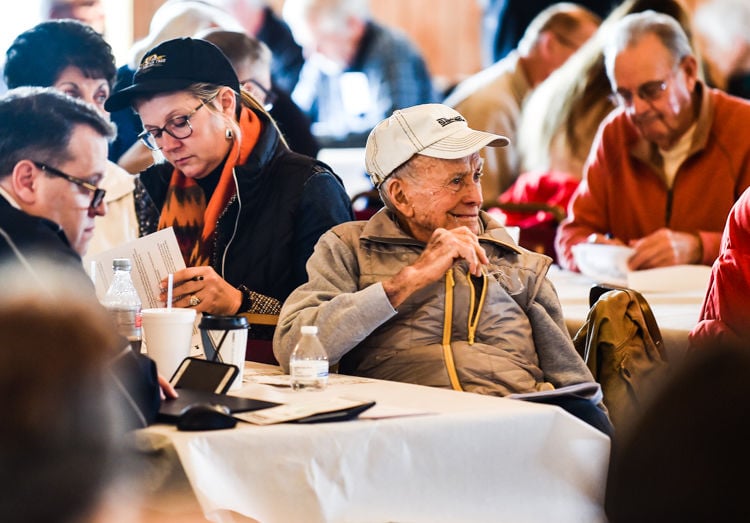 Sam Shine, founder of Samtech, watches bidding from a table with family and friends at Huber's. Shine was in attendance for the Huber family's Farm and Restaurant auction last November, where he purchased a large amount of the property in an effort to preserve the legacy. 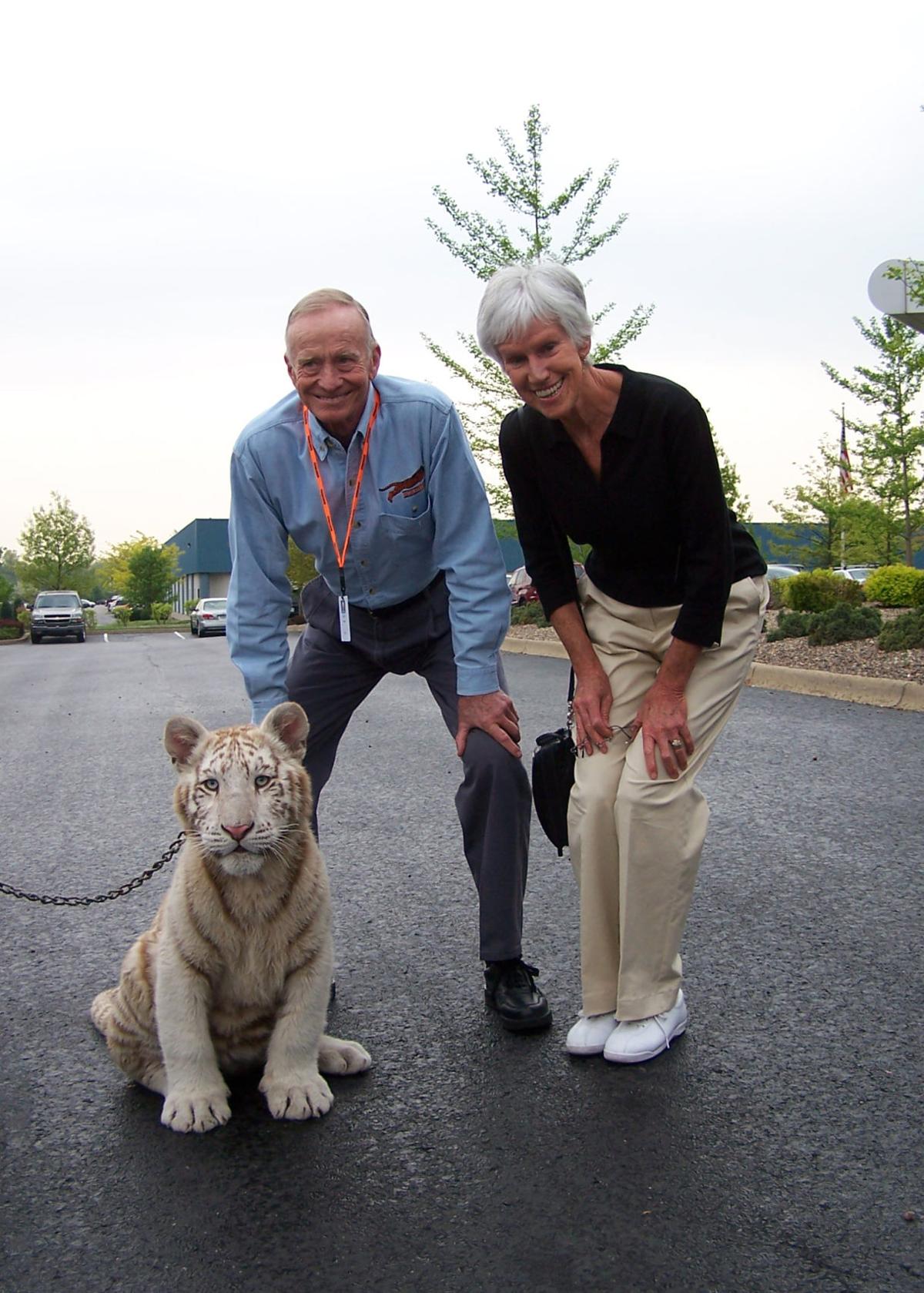 Sam Shine (pictured with his wife, Betty Shine) was the founder of Samtec, Inc. in New Albany. He died Friday at age 86. Submitted.

Sam Shine, founder of Samtech, watches bidding from a table with family and friends at Huber's. Shine was in attendance for the Huber family's Farm and Restaurant auction last November, where he purchased a large amount of the property in an effort to preserve the legacy.

Sam Shine (pictured with his wife, Betty Shine) was the founder of Samtec, Inc. in New Albany. He died Friday at age 86. Submitted.

NEW ALBANY — Local residents are mourning the loss of Sam Shine, a businessman and philanthropist known for his generosity and dedication to Southern Indiana.

Shine, founder of Samtec Inc., died Friday, Nov. 15 at age 86. He formed the privately-held electronic cable and connector manufacturing company in 1976. From that beginning, the New Albany-based enterprise has grown into a global corporation with more than 40 locations worldwide. Shine was passionate about environmental conservation, creating the Sam Shine Foundation to support his mission of protecting natural ecosystems.

His charitable contributions have supported causes throughout Kentuckiana and beyond. He and his family donated 40 acres to Purdue University for the Purdue Research Park, located off Charlestown Road, and he contributed funds toward the Ohio River Greenway. He also donated $1 million to Louisville's Waterfront Botanical Gardens and 339 acres for a land trust in Bloomington.

Shine's philanthropy has significantly helped conservation efforts in North Florida, too; he bought 6,200 acres of land next to the St. Mark's National Wildlife Refuge, and in 2018, he donated the property to the U.S. Fish and Wildlife Service.

When Joe Huber's Family Farm & Restaurant in Starlight was auctioned in 2018, Shine purchased the farmland around the restaurant tract with the intention of preserving the property, the News and Tribune previously reported. He offered support to the Huber family members who purchased and re-opened the restaurant.

Shine grew up on a farm in New Albany, and he graduated from Indiana University in 1955 with a bachelor's degree in business. He served in Korea from 1956 to 1958 in the U.S. Army, and he worked for an electronic connector company before he launched Samtec with his wife, Betty.

Danny Boesing, director of product marketing at Samtec, has worked at the company for more than 30 years. He said in an emailed statement that it is difficult to summarize Shine in just a few sentences. He described him as an "entrepreneur and a visionary" who started a company that became a global leader in its industry.

"He believed in quality people," Boesing said of Shine. "He held you accountable, but he took care of his associates. And [then] there was his humility. He didn't seek the spotlight and would be uncomfortable with me speaking about him in this way."

Samtec's 2018 revenue was $822 million, according to the corporation's website. Its headquarters remains in New Albany, and Shine's son, John, now serves as president and CEO.

Wendy Dant Chesser, president and CEO of One Southern Indiana, is impressed with the way Shine built Samtec into a global corporation while maintaining its local ownership.

"When you look at the growth strategy, the presence and even the domination that they have in their industry, the fact that they've been able to do that without going through a public offering for raising outside funds is remarkable," she said. "In Southern Indiana, I don't know that we truly appreciate how the family's dedication to the company is also really a way to show their dedication to the community, and we are grateful for that."

Shine had the ability to see both big-picture needs and focus on "smaller tasks that build the character of our community," and he understood the value of building personal relationships beyond the board room, Dant Chesser said.

Andrew Takami, director of Purdue Polytechnic New Albany, said Shine was part of the vision for the research park, and the donation of the property helped expand the number of local graduates able to receive four-year degrees from Purdue University. He also praised the entrepreneur's commitment to Samtec and its employees.

"The things that really made him happy were being part of [the] Samtec family and making sure that people are able to live meaningful lives," he said.

Jerry Finn, executive director at the Horseshoe Foundation of Floyd County, said Shine was an "innovative leader" who showed his passion for his community through his work as a businessman and philanthropist.

"He worked to make sure Southern Indiana was the best possible place to live, work and play," Finn said. "He certainly cared deeply about the environment and wanted to protect the environment as a legacy for his children, grandchildren and beyond, and he was an incredibly generous and humble philanthropist."

Shine's donations were often anonymous, and for Finn, this humble approach to philanthropy showed that he cared deeply about the cause, not public recognition.

"I think there will be people who will enjoy the giving he did over the years and not even know where it came from, whether it’s in gardens or fields or riverfront or parks," he said. "[Shine] will touch their lives in ways that most people will not even be aware of, and I think that’s the way he would have wanted it."

Finn said he is sad that such an "amazing man is lost from our community."

"He was so kind and direct," he said. "You always knew exactly where he stood. He was easygoing. He always had a big smile on his face. You could always see that he cared deeply anytime you had an interaction with Sam Shine."

A visitation for Samtec employees and retirees is scheduled from 9 to 11 a.m. today at the company's New Albany headquarters, and a public visitation will take place from 2 to 7 p.m. at Naville and Seabrook Funeral Home, l1119 E. Market St. in New Albany. The funeral will take place 10 a.m. Wednesday at Trinity United Methodist Church, followed by a private entombment at Graceland Memorial Park.

The obituary asks that people plant a tree (preferably oak) or donate to the Sam Shine Foundation instead of buying flowers.