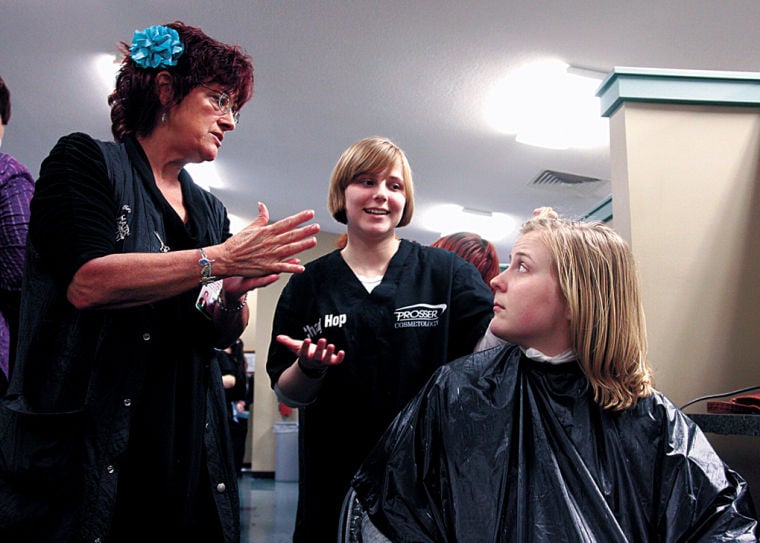 Mary Taylor, director of Prosser's School of Cosmetology, consults with her student, Charity Hop, about how to treat and style Michelle Ganev's hair at the school of cosmetology for the Prosser Career Education Center. Legislation under consideration in the Indiana Senate could eliminate license requirements for cosmetologists after 2016. Staff photo by Jerod Clapp 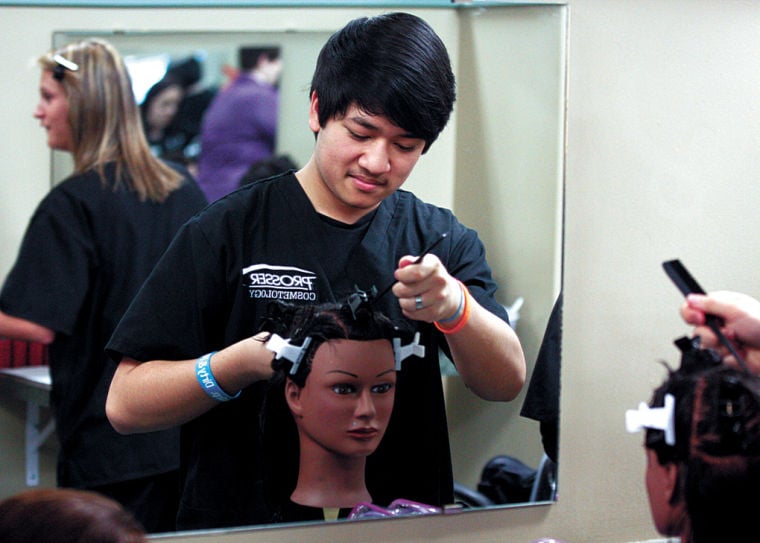 Kevin Phan, a junior at Jeffersonville High School, prepares a mannequin head for a perm at the Prosser Career Education Center's School of Cosmetology on Wednesday. Licensure changes for cosmetologists could come from the legislature with a bill in consideration in the Indiana House of Representatives. Staff photo by Jerod Clapp

Mary Taylor, director of Prosser's School of Cosmetology, consults with her student, Charity Hop, about how to treat and style Michelle Ganev's hair at the school of cosmetology for the Prosser Career Education Center. Legislation under consideration in the Indiana Senate could eliminate license requirements for cosmetologists after 2016. Staff photo by Jerod Clapp

Kevin Phan, a junior at Jeffersonville High School, prepares a mannequin head for a perm at the Prosser Career Education Center's School of Cosmetology on Wednesday. Licensure changes for cosmetologists could come from the legislature with a bill in consideration in the Indiana House of Representatives. Staff photo by Jerod Clapp

Resurrected concerns over license elimination for beauty professionals could affect cosmetology students at the Prosser Career Education Center and other facilities like it statewide.

Indiana Senate Bill 520 would create a committee to review state-issued professional licenses and possibly eliminate them.  A similar bill — House Bill 1006 — died in the legislature last year. Under SB 520, licenses for beauty professionals could face elimination in 2016.

Mary Taylor, cosmetology instructor at Prosser, said the bill could affect the job opportunities of her students after they leave her program.

“It’s not just a little group of cosmetologists here in Indiana, it’s all over,” Taylor said. “In order to work for Redken or Paul Mitchell or other cosmetology product sellers, you have to be licensed.”

She said students who want to work in salons also would face problems if they wanted to work out of state. The hours students spend at Prosser may not be recognized for licensure across state lines if the bill passes.

And, it would eliminate her school’s status as a state-licensed cosmetology education facility.

The eliminate, reduce and streamline employee regulation committee that SB 520 would create puts automatic expiration dates on licenses required in 13 job classifications. If kept, the committee would re-examine those licenses every five years.

After a committee review, a job’s license requirement may be eliminated unless professionals in that field successfully plead their case for that license’s relevance.

Rep. Ed Clere, R-New Albany, said the bill is one of Gov. Mike Pence’s prioritized pieces of legislation. Now passed in the Senate and moved to the House, Clere said he’s concerned about the ramifications SB 520 could have on job opportunities for professionals listed in the bill.

“I think that has the potential to cause a lot of needless uncertainty and disruption,” Clere said. “At a time when we’re trying to find ways to help stabilize employment and promote job creation, we shouldn’t be doing anything that could cause additional uncertainty or disruption in any business.”

He said since cosmetologists regularly deal with chemicals and need education on communicable diseases, he thinks the licensing of those professionals is important.

“Specifically with respect to cosmetologists, when this issue came up last year [under HB 1006], they had concerns about health and public safety to the extent that they use chemicals and have tools and instruments that are in direct contact with the body,” Clere said. “There’s a need for cosmetologists to follow safe, sanitary practices to avoid contamination and disease transmission and also to work safely with chemicals. I think there’s more to it than it may appear at first blush.”

Clere said his own profession as a real estate agent is slated to come under review in 2017.

Sen. Ron Grooms, R-Jeffersonville, said overall he supports the bill and thinks beauty professional licenses should remain on the list for periodic review. But he said he thinks because of the public health concerns associated with cosmetology and other related jobs, that the license requirement should remain.

“That profession, that career in my opinion, I believe there needs to be some surveillance and oversight,” Grooms said.

Alan Taylor, director for career and technical education at Prosser, said students in his school’s cosmetology program go through the state-required 1,500 hours of training to earn their licenses.

For about $400 in fees, students can graduate high school and enter the job market without going to another cosmetology-education program. If they didn’t go to Prosser, the same training could cost them between $15,000 and $20,000 at a post-secondary facility.

But if the license requirement for the field is eliminated, he said he thinks a private organization would step up and create a process to certify cosmetologists in Indiana.

Mary Taylor said even so, a certificate wouldn’t carry the same weight a license does if a student wants to work in another state.

“If it’s a private organization that issues a certificate, it’s not recognized by the state,” she said. “The other states would not recognize the certificate. I wouldn’t regard that certificate as high as I would a state license.”

She said if a student wanted to transfer the education they got at Prosser to a facility out of state, they may not apply the hours spent at the school toward license requirements because the facility where they were educated wasn’t state licensed, either.

Stefanie Griffith is co-owner of Strandz Salon and Threadz Boutique in New Albany. She said it’s difficult enough to move from state to state with a license in cosmetology, but removing that requirement could exasperate that process.

“Right now, it’s difficult to get your license switched from Kentucky to Indiana,” Griffith said. “We have people who move out of state and there are different licensing requirements everywhere.”

She said the health concerns with nonlicensed cosmetologists are very real. She said if an untrained person tries to give a client a permanent wave, the chemicals required could cause a burn they don’t know the process.

“I don’t think it’s a good idea [to eliminate the license], mainly for consumer protection,” Griffith said. “We do a lot of fixes for consumer chemical problems. If you open that up, you could have bigger problems than just hair color.”

Clere said SB 520 isn’t scheduled for a hearing yet, but he’s sure the House will hear the bill because of the priority Pence has placed on it.

Grooms said while the bill could help reduce undue restrictions on some people trying to enter various job markets, oversight on some of those jobs is still critical.

“I think the issue is that there needs to continue to be some monitoring over people in these professions that claim to be professionals in those fields,” Grooms said. “Eliminating those issues could create more jobs, but at what risk?”

Clere said while the bill has its merits, the committee would have some serious concerns to weigh with each career field if SB 520 passes.

“As a general proposition, I support periodic review of licenses and I support consolidation, streamlining and reduction of bureaucracy when possible, but we have to be cautious,” Clere said. “I don’t support elimination for the sake of elimination. With a cosmetology license, there is a public interest in licensing.”

Mary Taylor said she hopes the bill comes under the same fate HB 1006 did for the sake of her students and people who patronize salons.

“I feel like we need to be trained properly in how to use the chemicals we have. I don’t just want anyone to put chemicals in my hair,” she said. “It’s also a health issue; we have to be taught about communicable diseases and sterilization. I can’t see that [licensing] is a big money issue. I just don’t understand why they would want to do away with this.”

Charles David Palmer, 81, entered eternal life on Monday, January 11, 2021 at Clark Memorial Hospital. He was an Electrician by trade and retired from Sonoco after 42 years of service. Charles also served as previous owner of KFC in Salem and a member of Carr Township Baptist Church in Borde…