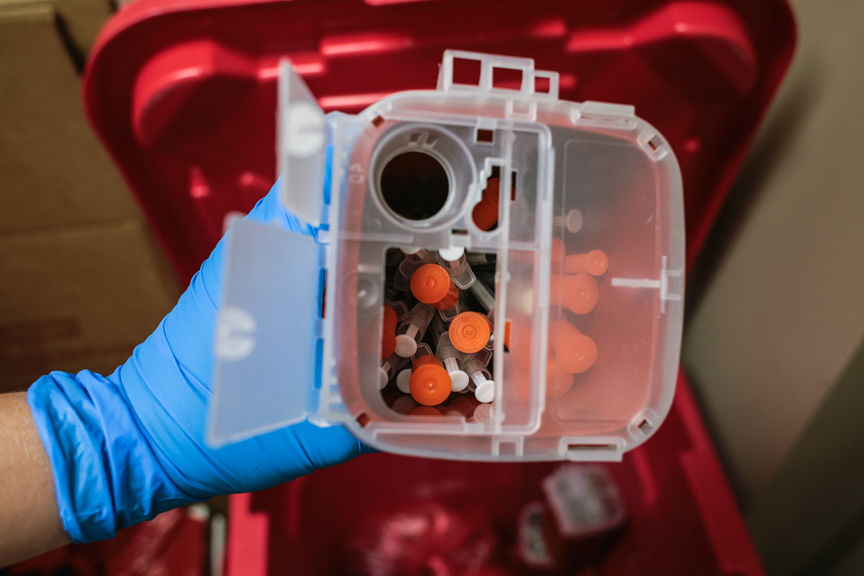 Used needles crowd the inside of a biohazard waste container at the Interchange needle exchange in Jeffersonville. 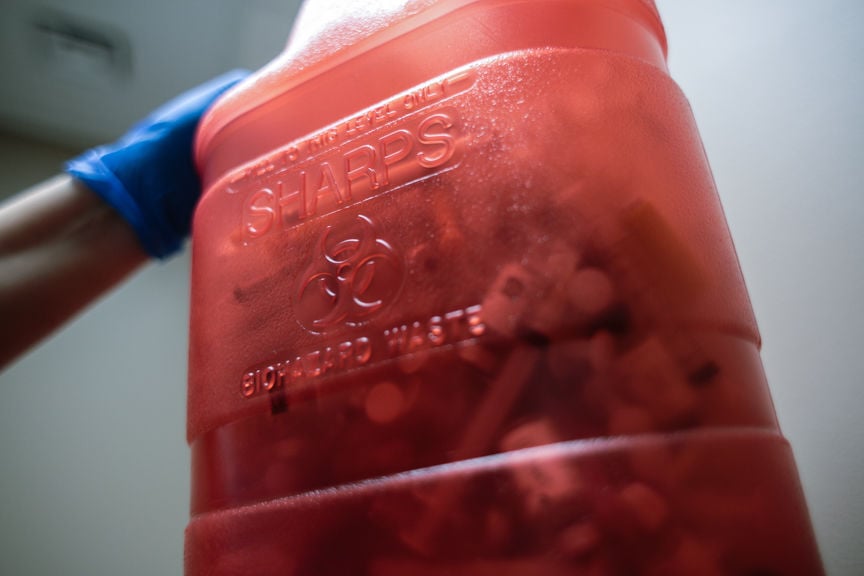 A large sharps container holds a mass of used needles at the Interchange in Jeffersonville. The program, which opened in January, exchanges used needles for clean ones, as well as educates drug users on other safety precautions. 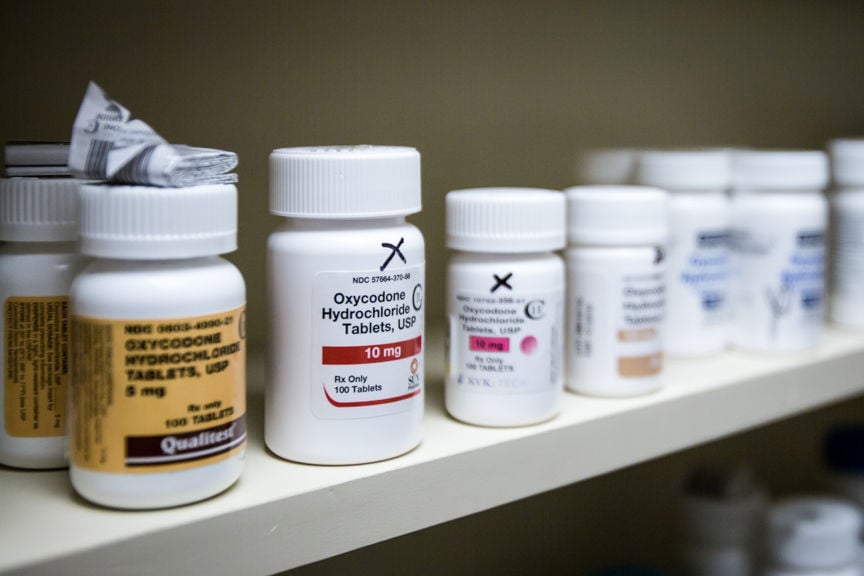 Bottles of Oxycodone line a shelf in a local pharmacy. 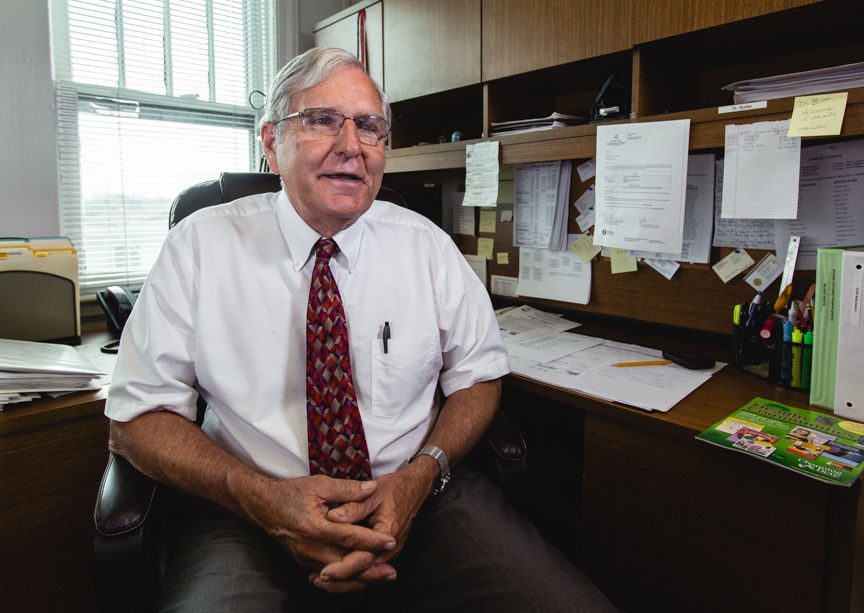 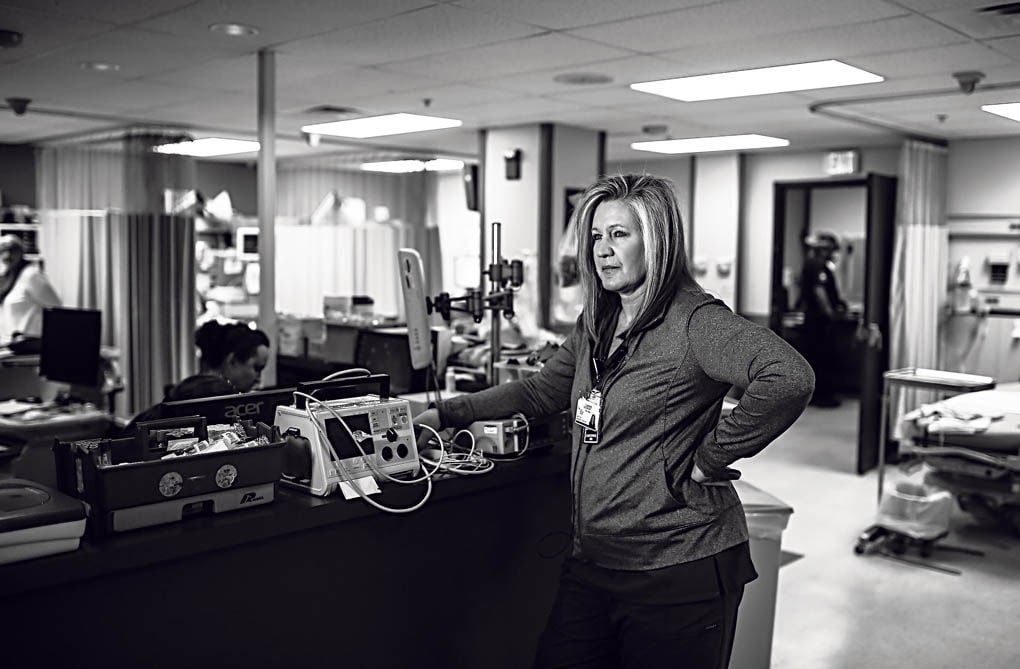 Clark Memorial Hospital Emergency Room Director Carrie Dodson, a 30-year veteran of the ER, was surprised by the volume of overdoses in Clark County. In February, the ER saw 25 non-fatal heroin overdoses, more than six times the number treated in the same month last year. 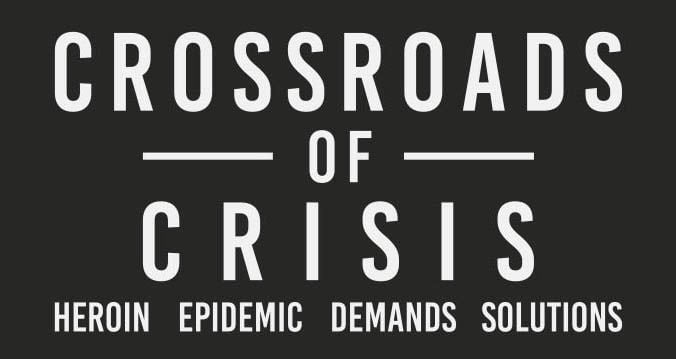 Used needles crowd the inside of a biohazard waste container at the Interchange needle exchange in Jeffersonville.

A large sharps container holds a mass of used needles at the Interchange in Jeffersonville. The program, which opened in January, exchanges used needles for clean ones, as well as educates drug users on other safety precautions.

Bottles of Oxycodone line a shelf in a local pharmacy.

SOUTHERN INDIANA — Soon after a needle exchange opened in Jeffersonville in late January, Clark County Health Officer Dr. Kevin Burke was reminded of why he declared an epidemic in the first place.

One of the first people to start receiving services from the exchange overdosed and died. The drug of choice, heroin, is the same drug Burke suspects is responsible for a spike in HIV and Hepatitis C cases.

It’s why he’s spent nearly two years tracking the drug and its consequences, and warning the public about the scourge that’s changing his community.

Burke has plenty of numbers, but he said there isn’t a reliable way to estimate just how many Clark County residents use heroin intravenously or otherwise. What he is more certain of is that the highly addictive opioid crosses all demographics.

“We used to think of opioid abusers as sort of inner-city Skid Row, destitute, down and out sort of individuals,” he said. “We were finding all socio-economic classes, all religions, all races, all ages, so it was a problem that sort of became part of the whole community rather than just a subset.”

As the opioid crisis spreads through Clark and Floyd counties, Southern Indiana is battling with an addiction that not only has clogged emergency rooms and given rise to infectious diseases — it’s torn apart families along the way.

Cile Blau, a former elected judge and now a senior judge in Clark County, has seen up close the toll drugs have on families. When she took the bench in 1996, cocaine was popular. Later, it was methamphetamine.

But there’s something different about heroin’s impact.

When heroin’s reach extended to a neighbor, Blau understood its devastation in a way she hadn’t been able to from the bench.

“The mother found my husband outside — he was taking groceries in from the car — and she called for his help,” Blau remembered. “And her son had a needle in his arm and he was dead, or dying.”

Blau’s husband helped try to resuscitate the woman’s son until EMS arrived. Blau went to the hospital and sat with her neighbor “in the room you don’t ever want to sit in,” waiting for the news.

Blau described her neighbors as good, involved parents. But as is so often the case, heroin’s grasp was too strong to break.

“I’m pretty hard nosed,” Blau said. “I’ve been through a lot with the drug courts and worked with a lot of felons and seen a lot of their life experiences, but that to me is probably one of the most difficult situations that I’ve been in.”

For Burke, the crisis hits close to home, too. He was born in Clark Memorial Hospital, the same hospital that now treats opioid overdoses nearly every day.

As the county’s health officer since 1990, Burke often finds himself at the health department next door, and probably more so since the summer of 2015.

That’s when Burke formally declared an HIV and Hepatitis C epidemic. He attributed the spike to increased intravenous drug use.

“What we primarily saw was an increase in Hepatitis C rates, and when we compared those numbers to what the rate is in Indiana, it was about a 30 percent increase,” Burke said. “And HIV positivity compared to the rest of Indiana was about 25 percent higher.”

Health department numbers show there were 93 new cases of Hepatitis C reported in 2014. In 2015, that number more than tripled to 335. So far this year, there have been 102 new cases reported.

Fifteen new cases of HIV were reported by the end of 2015 and again by December 2016, making for a total of 328 people living with HIV or AIDS in Clark County, according to data from the Indiana State Department of Health.

After declaring an epidemic in 2015, Burke asked Indiana Health Commissioner Dr. Jerome Adams to second the declaration, which would allow Burke to establish a needle exchange program.

Needle exchanges are meant to reduce the harm of intravenous drug use, including the spread of diseases, by providing clean needles in exchange for used ones. They can also serve as an entry point into education and treatment.

A lengthy application process and roadblocks to funding delayed the opening of the exchange by more than a year, but doors finally opened on Jan. 26. Burke said it’s been a slower start than expected, noting that the most people the exchange has served in one day is 14.

It wasn’t until last year that Burke noticed a significant spike in overdose deaths, which jumped to 90 from 55 between 2015 and 2016. There have been at least 21 deaths so far this year, according to the health department.

Clark Memorial Hospital Emergency Room Director Carrie Dodson has been working in ERs for 30 years. Hospitals everywhere have always treated drug overdoses, but when Dodson came to Clark County in June, she was surprised by the volume of overdoses.

In neighboring Floyd County, the numbers aren’t as alarming. Still, Health Officer Dr. Tom Harris is concerned by a recent increase in opioid-related overdose deaths. The number increased to 19 in 2015 and 2016 from 13 in 2014.

“We have the blue guy in the car now who somebody drags them up and they’re not breathing. Sometimes they have a pulse, sometimes not. If they have a pulse then we can ventilate them and get Narcan into them, [also known as] Naloxone, which is the antidote for opioids.”

Emergency rooms are finding that one dose of the overdose-reversal drug isn’t always enough. Part of that could be attributed to the growing prevalence of heroin laced with Fentanyl, an opioid that is 50 to 100 times more potent than morphine, according to the National Institute on Drug Abuse.

“... You hear the patients talk, and it’s kind of interesting, because even they talk amongst themselves about how the next big thing is heroin and what it’s being cut with and how dangerous it is,” Dodson said. “And they’ll give each other a heads up about, ‘hey, this batch came out and it’s cut with this tranquilizer, or hey it’s cut with this narcotic.’”

While Burke spreads the word about how the needle exchange can curb the crisis, he’s hoping others bring more to the table.

“My opinion is that it continues to get worse, that we have not instituted policies and plans to grapple with this problem in our community and push the opioid use down so that we’ll gradually see these numbers head the right direction,” Burke said.

Soon after stepping down from what was then Clark County Superior Court No. 2, Blau was asked to be a part of a local chapter of the Substance Abuse Ministry, a group founded by parishioners from St. Augustine and Most Sacred Heart of Jesus Catholic churches in Jeffersonville. Known as S.A.M, the group aims to raise awareness of substance abuse and connect people with resources.

As the group grew, Blau heard more tragic stories from families, often parents whose child was addicted to heroin. She became encouraged that people were at least talking and supporting each other.

But she says it’s disheartening that she doesn’t see as much involvement from people who haven’t been so directly impacted by addiction. In the past, she’s failed to convince those people that heroin is a community problem.

Often, Blau said, those same people come back to her months later when the crisis strikes their own family.

“We all have a role in this. We all need to be doing something, whether it’s in our immediate family or whether it’s a neighbor,” she said. “If it’s not personally touched us now, it will in the future.

“So we need to learn and to see and to be proactive in this situation.”

— This story is the first in a five-part series examining the opioid epidemic in Clark and Floyd County.

NEXT SATURDAY: The health consequences of drug addiction have high costs and spread beyond the individual; Also, a look at the needle exchange — its merits and challenges amidst community support and concerns.

Far from a 'good time': Evan Blessett working to help others avoid mistakes he made

JEFFERSONVILLE — When Evan Blessett started using drugs and alcohol, he described it as "jus…

APRIL 8 — State of the crisis

MAY 6 — Solutions and success stories

Share your stories and thoughts on the opioid crisis by emailing them to crossroadsofcrisis@newsandtribune.com. You can also reach us on Twitter using #CrossroadsofCrisis or Facebook at facebook.com/newsandtribune.

In 2015, 1,236 people died from a drug overdose in Indiana, a more than seven percent increase from the year before. Below, numbers show that our neighboring counties are also seeing a jump in fatal overdoses.

— Includes all drug overdose deaths, including heroin and opioid-related incidents, as reported by local health departments. State data is from the Indiana State Department of Health.

OPIOIDS — A class of drugs that includes synthetic prescription pain relievers such as oxycodone and hydrocodone. These drugs are chemically related and interact with opioid receptors on nerve cells in the body and brain. This class includes the illegal drug known as heroin.

HEROIN — An opioid drug made from morphine, a natural substance taken from the opium poppy plant. Heroin can be injected, snorted or smoked and appears as a white or brown powder. Heroin that appears as a black, sticky substance is known as black tar heroin.

FENTANYL — A powerful synthetic opioid analgesic that is 50 to 100 times more potent than morphine. Fentanyl is typically used to treat patients with severe or chronic pain, but can also be laced with the illegal drug heroin. The drug's high potency greatly increases the risk of overdose, especially if a person who uses drugs is unaware that fentanyl is present.

OVERDOSE — An injury to the body caused when drugs are taken in excessive amounts. An overdose can be fatal or non-fatal. Approximately 91 Americans die every day from an opioid overdose, according to the Centers for Disease Control. Opioid-related overdose deaths account for more than six out of every 10 drug overdose deaths.

NALOXONE — An opioid antagonist medication that can rapidly reverse an opioid overdose. The life-saving drug can quickly restore normal respiration to a person whose breathing has slowed or stopped as a result of overdosing with heroin or prescription opioid pain medications

ADDICTION — A chronic, relapsing brain disease that is characterized by compulsive drug seeking and use, despite harmful consequences.