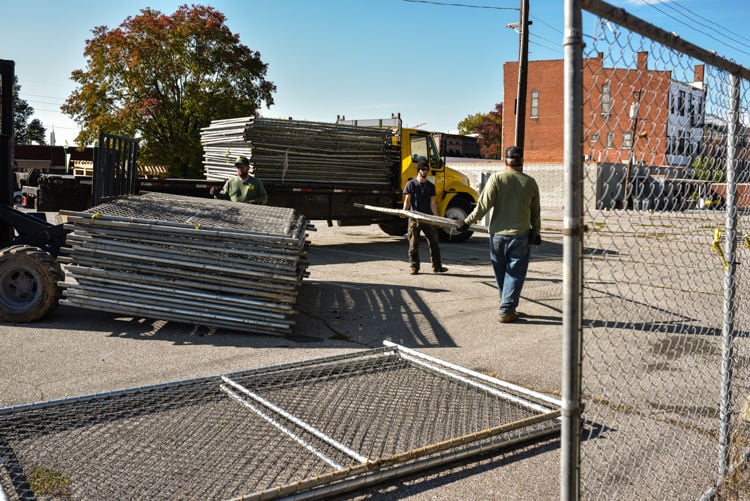 Workers unload sections of fencing to erect around the former public parking lot at the corner of Spring and Market Streets in downtown Jeffersonville on Tuesday. 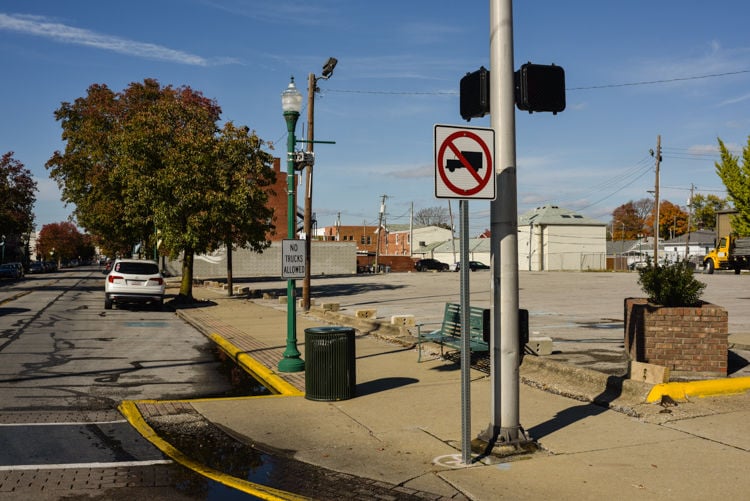 The former public parking lot at the Spring and Market Streets intersection received a fence around the property Tuesday.

Workers unload sections of fencing to erect around the former public parking lot at the corner of Spring and Market Streets in downtown Jeffersonville on Tuesday.

The former public parking lot at the Spring and Market Streets intersection received a fence around the property Tuesday.

JEFFERSONVILLE — A downtown parking lot has been fenced off and closed to the public.

The property at the northeast corner of Spring and Market streets has been hotly disputed in recent months, as developer arc has battled with the Jeffersonville Urban Enterprise Association.

On Tuesday, Alan Muncy, arc founder and chief creative officer, sent out a notice stating that public use of the lot would no longer be permitted. Muncy noted that he is contractually obligated to start construction on the property by the end of the year.

“We fully intend to do that, as we’ve met every stipulation of the contract,” he said.

In the next couple of weeks, Muncy plans to mobilize equipment on the site. A groundbreaking date should be scheduled in the next week, he added.

“It has to be done,” he said. “We have received our permit yesterday. It’s in hand.”

JUEA legal counsel Larry Wilder said that he had requested a temporary injunction to stop work on the property, but the timeline on when that will be decided in the courts is yet to be determined. Wilder noted that his team received arc’s response to the request Oct. 22.

“There will be a court and a judge who decides who has what rights,” Wilder said. “Until that happens, everyone can behave the way they want. Just like a parent can’t control how a child behaves, a city can’t control how Mr. Muncy wants to behave.”

Muncy is set to erect a $3.5 million mixed-use development, which would be composed of apartments and retail, on the lot. But JUEA officials argue that the deal for the land should be considered null and void, as an urban enterprise zone tax credit for the development was denied by the Jeffersonville City Council. Another attempt to receive the tax credit was also turned down by council members when Muncy, himself, presented before them in September.

According to Muncy, the JUEA seemingly wants to take the land back entirely, though he believes that he met all the requirements for the acquisition.

Council member Dustin White, who led the JUEA at the time of the deal and has since resigned his post, previously stated that the denial of tax credits is “unfortunate,” as it puts the property in jeopardy of being split between the JUEA and Redevelopment Commission, thus harder to develop. When it was originally transferred from redevelopment to the JUEA, it came with the stipulation that it be developed no later than 2022.

Now that alternatives have failed, “full-blown adversarial litigation” will be the path forward, with Wilder filing suit in June.

It remains unclear how work on the property will affect the suit, though Muncy noted that it is currently his property and that he plans to continue moving forward.

“We own the property,” Muncy said. “We’re going to go complete a project that’s going to benefit Jeffersonville.”

The News and Tribune sought comment from some owners of downtown businesses near the parking lot, but they declined.