Starting in 2019 but with a hiatus due to the pandemic, Urban Sketchers Jeffersonville meets one Saturday a month, usually outdoors, to draw together. 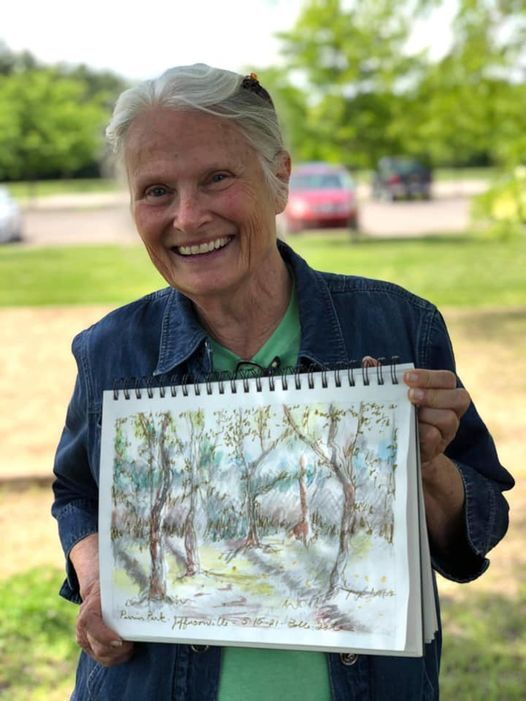 Beverly Belle-Isle, a Jeffersonville resident who brought the concept of urban sketching to the area, shows what she created during the Urban Sketchers Jeffersonville event at Perrin Park in May. 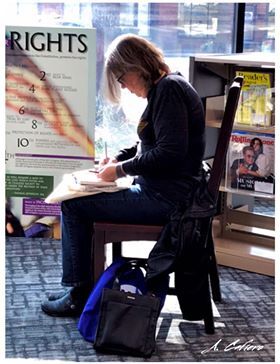 Melanie Thacker Glover sketches during an Urban Sketchers Jeffersonville event. The group gathers monthly at different locations to draw. The events are free and open to all. 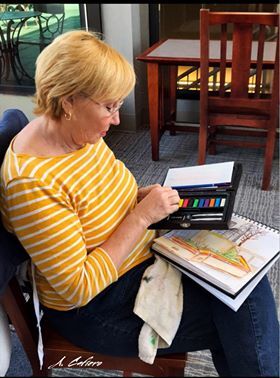 Vikki Reiter, a member of Urban Sketchers Jeffersonville, works on art during a monthly meet-up.

Starting in 2019 but with a hiatus due to the pandemic, Urban Sketchers Jeffersonville meets one Saturday a month, usually outdoors, to draw together.

Beverly Belle-Isle, a Jeffersonville resident who brought the concept of urban sketching to the area, shows what she created during the Urban Sketchers Jeffersonville event at Perrin Park in May.

Melanie Thacker Glover sketches during an Urban Sketchers Jeffersonville event. The group gathers monthly at different locations to draw. The events are free and open to all.

Vikki Reiter, a member of Urban Sketchers Jeffersonville, works on art during a monthly meet-up.

After a hiatus due to the pandemic, a group of local artists has resumed its monthly creative meet-ups and invites people of all skill levels to join in an international art movement connecting communities from across the world.

The Urban Sketchers Jeffersonville started in mid-2019 and after the halt due to the pandemic, continued again in May. The next event will be at 10 a.m. June 19, and start at Big 4 Station in Jeffersonville.

The “sketch crawls,” which are one Saturday a month, usually start in the morning at an outdoor location good for inspiration — such as a beautiful park or neighborhood. After introductions, the artists split off to find unique things they want to focus on sketching for a couple of hours.

The group meets up to share what they’ve created then heads to lunch. Their art is shared on social media communities in other areas.

Beverly Belle-Isle, a professional artist living in Jeffersonville, brought the idea with her when she moved to the city in 2017 from the Dallas/Ft. Worth area where she’d been part of the Urban Sketch group there.

“When I got here and I realized that there was not any information about Urban Sketchers or that there was not a group here, I thought it would be a really good idea to start one up,” she said. “And so I did, with the help and support of a number of artists in the community.

“We’re somewhat of an unusual group and definitely unique to this area.”

Absolutely anyone can join the group, just show up with a pad and sketching supplies, whether that’s pencils, pastels or watercolors. It’s free and open to children and adults of all ages and all skill levels.

“We welcome everyone,” Belle-Isle said.

Vikki Reiter, a member of the group, said she likes both the connectivity of everyone doing this together, but also the creative freedom everyone finds when they split off to search for their focus.

“They’re on their own and that’s why it’s really interesting to see,” Reiter said. “I did a picture of another artist drawing at the Big 4. [When] we were at the Steamboat Museum, some people did the outside of it and some people did a room. At the farmers market, they might draw someone at one of the booths.

“I’ve just always liked artwork and its a really relaxing thing to do. You’re outdoors and you can socialize with other people but it’s a non-judging environment.”

Belle-Isle has readjusted her life after an accident in 2015 when she was still in Dallas, one that caused serious injuries. She now has a titanium right arm.

“So that has very much changed my whole life but also the way I can and do do art,” she said. “So I tell the sketchers when they come to the group — sure some are unsure and uncertain — I tell them that if I can draw, you can draw, and I truly mean that.”

There is no fee to participate, and the group does not seek funds from any government or other agency.

“We are completely fueled by enthusiasm and by a small handful of instructive volunteers,” she said. “And also the desire that exists among people of this community to be a part of a global art network, and that’s what this is.”

Urban Sketchers started in 2007 in Seattle, and since has spread across the U.S. and the world.

“There are groups in Great Britain, the Netherlands, Japan, South Korea, Vietnam, Canada, Norway...they’re all around the world,” she said. “And one of the things we do when we draw is we post our drawings — good, bad and indifferent — online that way people from all over the globe who are urban sketchers can check in and see what we are seeing in our hometowns and when we’re on our vacations and vice versa. We can see their drawings of their environments also.

“So we’re connecting through our sketches. One of the things Urban Sketches says is that we are showing the world one drawing at at time.

“I think it’s really a vital concept. It’s all on location drawing, we don’t draw from photographs, we don’t draw in studios...because life is a moving target and drawing outside and in the community whether we’re in a beautiful park or in an alleyway, the point is to draw what you actually see. Basically you’re keeping an art journal of your own environment.”

• WHO: This is open to all ages and skill levels

• WHAT TO BRING: Sketch pads and tools to draw with, some limited supplies may be available if people arrive without them