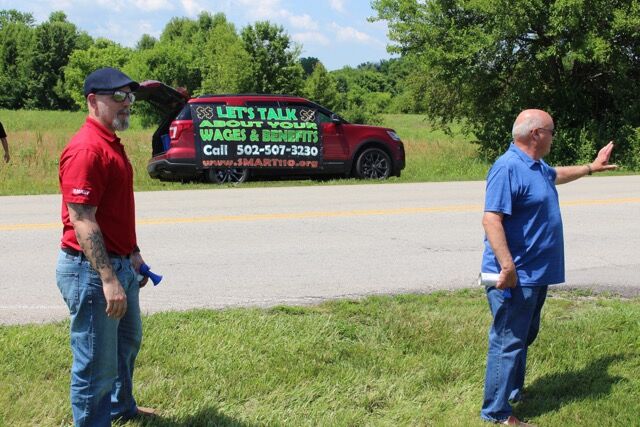 Jeremy Waugh, left, organizer at the International Association of Sheet Metal, Air, Rail and Transportation Workers (SMART) Local 110 and Mark Adams, also part of the union, wave to employees at BrandSafway Spider as they leave work Friday. Last fall, employees contacted SMART Local 110 about moving forward with union representation and will vote this month on whether to do so. 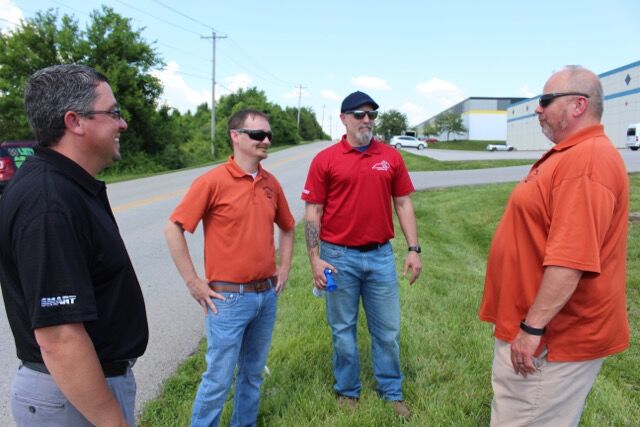 Jeremy Waugh, left, organizer at the International Association of Sheet Metal, Air, Rail and Transportation Workers (SMART) Local 110 and Mark Adams, also part of the union, wave to employees at BrandSafway Spider as they leave work Friday. Last fall, employees contacted SMART Local 110 about moving forward with union representation and will vote this month on whether to do so.

JEFFERSONVILLE — Employees at a Jeffersonville production company are casting ballots this month to select whether they want union representation.

Last fall, a portion of the eight union-eligible employees at BrandSafway Spider on Middle Road, a company specializing in scaffolding and safety netting, contacted the International Association of Sheet Metal, Air, Rail and Transportation Workers Local 110 to inquire about becoming a union shop.

Ballots were mailed last week and must be returned by mail by the end of the month. The votes will be counted during a livestream and if 50% of employees plus one, which in this case means five people vote for the union, they’ll move forward with contract negotiations.

“There were some problems at the shop, some of the guys had different complaints,” an employee who asked not to be identified told the News and Tribune. “We weren’t getting our heat fixed during the winter time, we didn’t have fans last summer, there’s some safety and training concerns... .”

The employee said there also was no deep cleaning done when the employee said much of the staff got COVID-19 last year, and that they didn’t receive basic sanitizing services until January of this year.

“Complaints were made on multiple occasions to the company’s safety department about various issues but nothing was ever done and we didn’t report further for fear of repercussions,” the employee said. “We felt unionizing would be the best way to make our voice heard.”

A voicemail and email sent to the BrandSafway Spider corporate headquarters Monday seeking comment were not returned.

Jeremy Waugh, organizer at SMART Local 110, which serves parts of Kentucky and eight Indiana counties, said the union was contacted by employees at Spider last fall and started moving forward with the steps needed to secure a union. On Friday, several union members gathered outside the facility on Middle Road to cheer on workers expected to receive their ballots over the weekend.

The National Labor Relations Board requires 30% of the eligible employees to sign cards and send them to the governmental agency, a first step to determine if there is even enough interest in starting. But Waugh said that local 110 requires an even higher percentage of cards signed, which they’ve already achieved.

“It’s basically setting up meetings to provide information to see if this is the direction they would like to go, if they really do want to bring us in to represent them or if they want to kind of step back and continue how things are,” Waugh said of how the process works before the organizational vote.

He said the biggest reasons employees seek union representation is for protection against being exploited by the company and to ensure they’re compensated fairly.

But with the employees at Spider, he said their motivation was different.

“Theirs was training and safety in the building,” he said. “Of course, everybody always wants more money and benefits. But that wasn’t the driving force from them, which I thought was kind of unique and it just makes this a little different.”

He said they also wanted more standardization in operations and what their jobs entail.

“Everyone kind of gets trained how to do something but they all do things different,” he said. “They’re looking for something a little more uniform, a path to move throughout the company, more structure.

“So they’re trying to get a little clarity.”

The international company has unionized shops in other areas, but the Bureau of Labor Statistics shows Indiana as having less of a union presence than neighboring Illinois and Ohio and both the east and west costs.