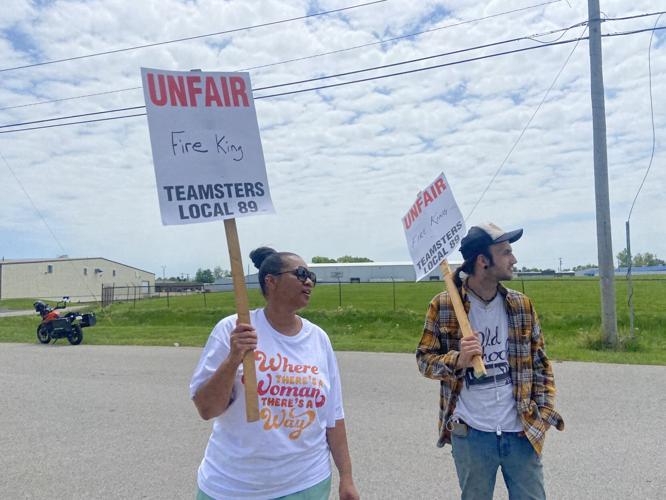 FireKing production workers Libby Rasool and Corey Niece were among more than 70 union workers who went on strike Monday at the New Albany facility. 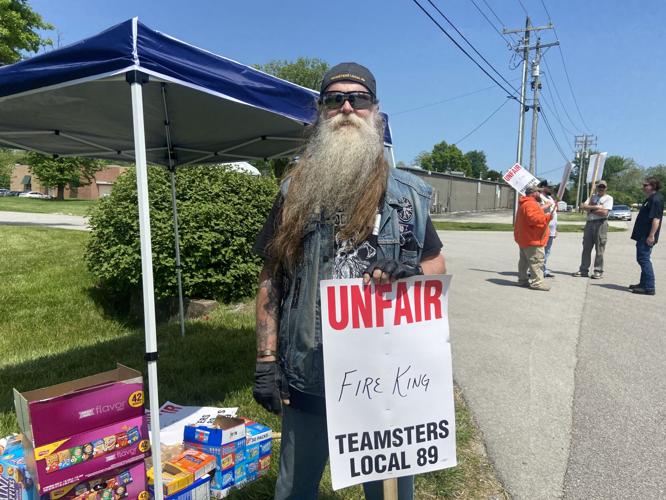 Dale Beanblossom, an operator/mixer at FireKing’s production plant in New Albany, stands outside the Park Place facility with fellow union workers Monday while on strike. The company’s employee health care plan and wages are among his concerns. 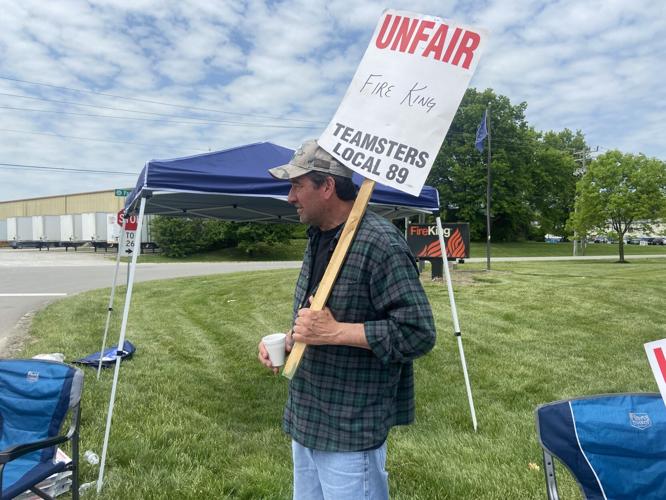 FireKing production workers Libby Rasool and Corey Niece were among more than 70 union workers who went on strike Monday at the New Albany facility.

Dale Beanblossom, an operator/mixer at FireKing’s production plant in New Albany, stands outside the Park Place facility with fellow union workers Monday while on strike. The company’s employee health care plan and wages are among his concerns.

Throughout the day, workers stood outside FireKing’s production plant at 900 Park Place. As they held signs in protest, the workers’ health care plan and wages were among the issues motivating the workers to take strike action.

FireKing is a manufacturer of storage products such as safes and filing cabinets. It also has corporate offices on Security Parkway in New Albany.

Jay Dennis, business agent with Teamsters Local No. 89, represents the union workers at FireKing. He said workers began striking at 3:30 a.m. with more than 70 people showing up throughout the day, including almost all the union membership at FireKing.

He said the formal reason for the strike is based on alleged practices by the company during contract negotiations. He notes that the union has filed an Unfair Labor Practice (ULP) charge with the National Labor Relations Board against the employer.

FireKing worker Dale Beanblossom said he arrived at 3:30 a.m. to join the picket line and plans to continue throughout the week. He is a union member who has worked at FireKing for 36 years.

“As long as they’re open for business, I’m going to be a thorn in their side,” he said. “If we stand strong together, we can stand up to companies like this. People can get a decent living and good health care for their family.”

Dennis said during an extension period for contract negotiations, the company “tried to subvert” the bargaining process with union leadership by sending out communication directly to employees regarding the issues under discussion in negotiations.

“We were acting completely in good faith,” he said. “We gave the company an extension of 10 days to try to work through this health care issue and some of the other issues, and instead of coming to the table and trying to come to some sort of resolution to this, what we got instead was the company decided to put out basically a propaganda letter to work around the bargaining process.”

The union hopes for the NLRB to vote in its favor to support the ULP strike, Dennis said.

“If for some reason it were to vote against us, it could convert to an economic strike,” he said. “We believe we’re on the right side of the issue, and we’ll just have to see what the NLRB process brings us.”

On Monday, FireKing CEO Rick Mejia provided a statement about the ULP charge, saying the “union’s allegations in the pending unfair labor practice charge are patently false and represent nothing more than procedural gamesmanship.”

“The company will defend this claim vigorously and welcomes the opportunity to share the truth with the NLRB,” he said.

In a statement issued last week, Mejia said the company “negotiated in good faith with the union for several weeks, resulting in a very fair and competitive final proposal for the union membership.”

The company is repurposing non-union workers to continue production during the strike. FireKing has 141 employees, including 86 union members.

On Monday, Mejia mentioned the company’s adjustment to operations amid the strike. According to FireKing’s statement, the union workers’ collective bargaining agreement has expired as of May 4 and striking union members’ benefits are now suspended.

“While we continue to hope union leadership will reconsider our proposal, FireKing is now adjusting operations to maintain the productivity of our business and our service to customers,” he said. “We are taking immediate steps to return our facilities to normal business operations and will begin advertising for permanent replacement employees. We would much prefer to operate FireKing with our regular employees, but we have no choice but to hire permanent replacements to maintain production.”

Mejia said in the news release that the “strike will impact operations, but we have a dedicated non-union staff, many of whom started in production, that will keep the company moving forward and strong during this period.”

“We made numerous, generous offers which were unfortunately rejected,” he said. “Our mission is to ensure our customers continue to receive the best possible service.”

According to Dennis, the strike will continue for “as long is needed.”

Union members say high out-of-pocket costs and deductibles in the employee health care plan are among their concerns. Teamsters Local No. 89 pushed for the company to adopt the union-sponsored TeamCare plan instead of the current United Healthcare plan.

According to Teamsters, the TeamCare plan would have included reduced premiums and a move to a co-pay system with lower deductibles. For Beanblossom, the health care plan was the key issue as he went on strike.

“The health care that we’ve got here — the deductibles and stuff are so high that you can pay for the insurance but you can’t afford to use it when you go to the hospital or whatever,” he said. “So basically I’m just paying for insurance but I don’t use it. That’s my main concern.”

Dennis said Teamsters believes “no one union or non-union should go bankrupt or forgo going to the doctor because of costs in their health insurance plans.”

“This company makes enough money as it is — they can afford to provide good health care for these folks,” Dennis said.

In a Monday news release, FireKing describes the union’s statement regarding company’s current health care plan as “unhinged from reality.” The company states that “health care costs are increasing for families across the country” and describes the current plan as “far superior to TeamCare.”

“FireKing offers a competitive health care plan when compared to similar-sized employers in this region,” the news release states. “The company even voluntarily contributes hundreds of dollars to offset deductibles.”

FireKing’s statement also says while the union has described the TeamCare plan as coming at minimal cost to the company, the plan “would increase the company’s cost by six-figures,” and it would come at “heavy price” for FireKing employees.

Dennis believes the “company chose control over doing what’s right for its employees” in regard to the health care plan. FireKing also responded to this characterization in Monday’s statement, describing it as “fear-mongering.”

“FireKing, as it has done all along, wants to maintain flexibility to secure the lowest prices available on the open market. FireKing has repeatedly kept annual health care cost increases below the max threshold set in the agreement by negotiating in the open market. On the other hand, TeamCare’s plan could massively raise all costs after the first year, and we wouldn’t be able to do anything about it.”

Beanblossom also expressed concerns with wages. He said that although the company’s proposed agreement would have included a pay raise, he is concerned about the removal of a production bonus.

“You really wouldn’t have gotten much of a raise,” he said. “On paper, yeah, it looks like you’re getting one…but getting rid of the production bonus, that’s just ridiculous.”

FireKing described the union’s statements about the production bonuses as a “complete lie.”

“The FireKing proposal increases and guarantees the production bonus to employees by including it as a fixed part of the employee’s wage,” the statement reads. “In fact, the company offered to include $0.70/hour in the wage rate, which is an increase from $0.65/hour average production bonus employees earned over the last two years. By year five of the proposed agreement, the value of the production bonus would increase to $0.77/hour, paid not only on the hours worked, but also their PTO as well.”

According to FireKing, the proposed agreement included the highest first year hourly wage in the history of the company, increased hourly wages in each year of the 5-year contract, a reduction in individual contributions toward the health care plan, an additional paid holiday and an increase in certain bonuses and reimbursable expenses.

FireKing’s news release states that in the proposed agreement, workers would make more than $20 an hour for the first year, and most would earn more due to their length of time working with the company.