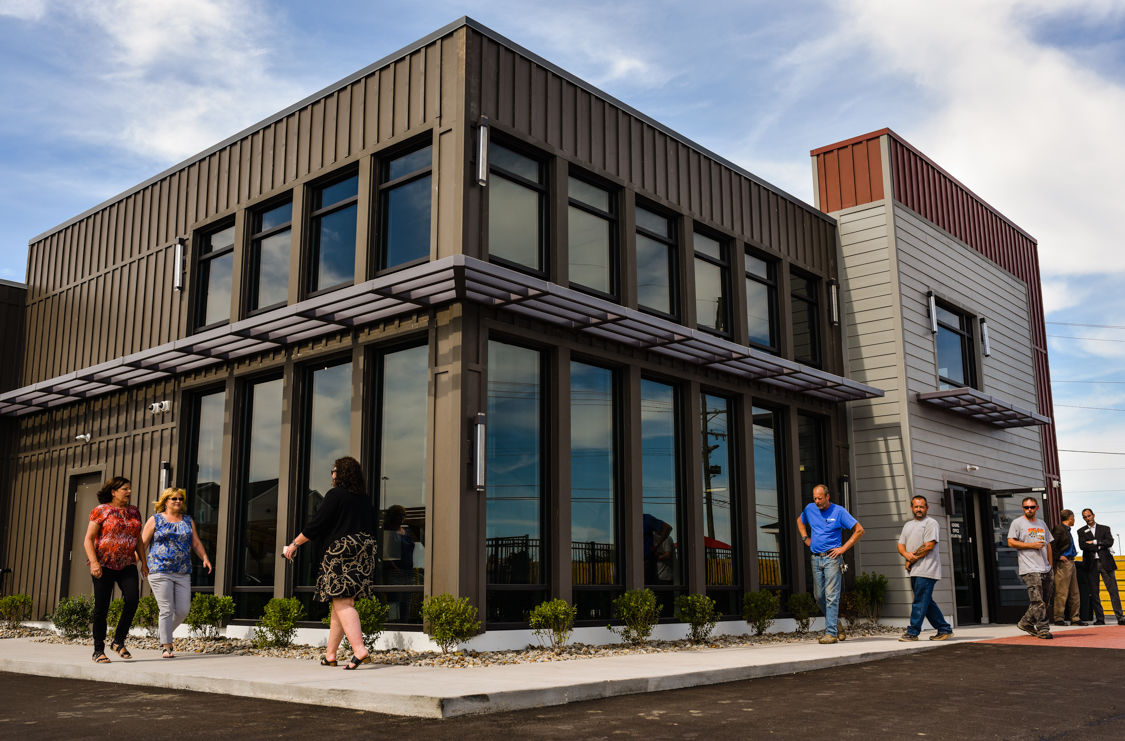 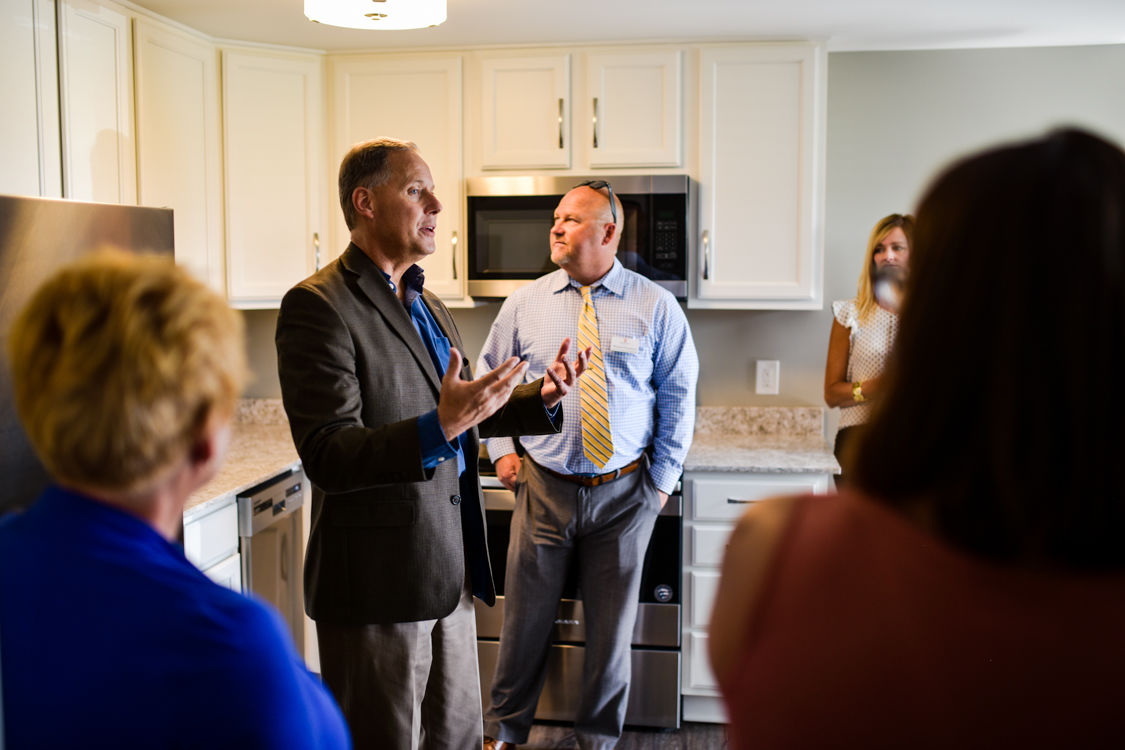 Clayton Pace, Director of Development and Construction with the Denton-Floyd Group, speaks on the use of space within the 1-bedroom apartments, to provide functionality with an upscale feel while giving a tour to guests. 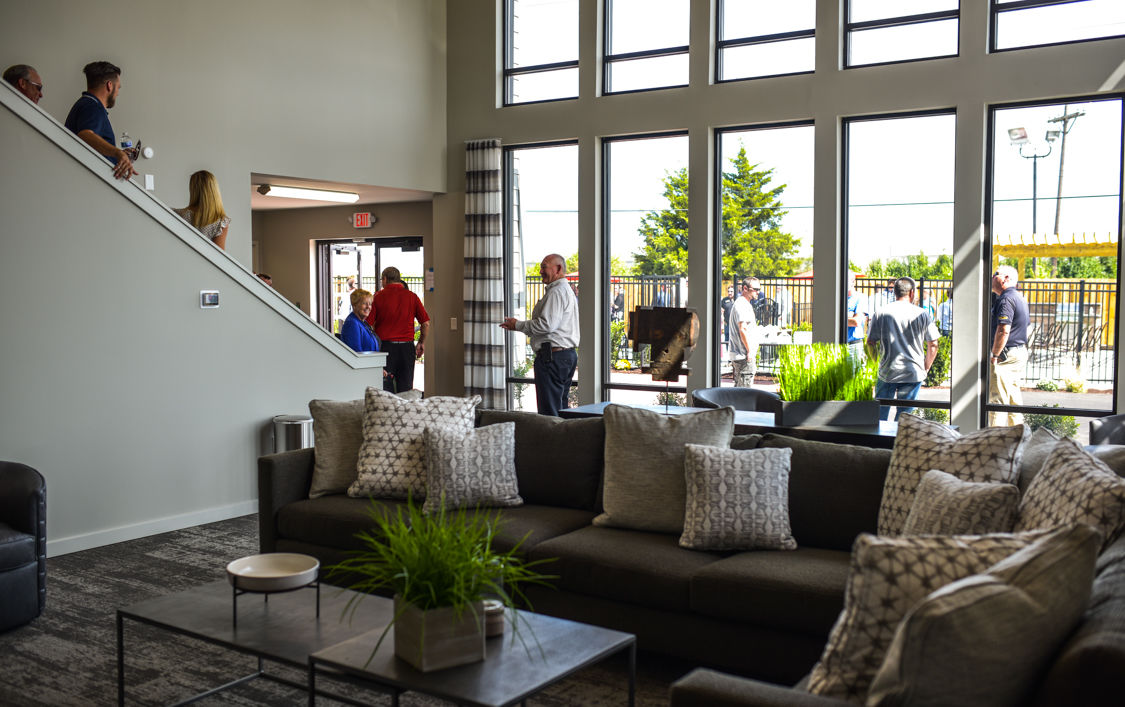 Guests walk through the lounge area after looking over the upstairs game room while touring the Clarksville Lofts on Tuesday.

Clayton Pace, Director of Development and Construction with the Denton-Floyd Group, speaks on the use of space within the 1-bedroom apartments, to provide functionality with an upscale feel while giving a tour to guests.

Guests walk through the lounge area after looking over the upstairs game room while touring the Clarksville Lofts on Tuesday.

Tuesday afternoon, local leaders celebrated the grand opening of Clarksville Lofts — a 40-unit complex complete with an inground swimming pool, dog walk area, fire pit, game room and community area — at the site which was once the Crest Motel along U.S. 31.

Clarksville Redevelopment President A.D. Stonecipher said he's proud of the project, which marks the first set of micro-units in the area.

"This represents not only an amazing transformation of a property that was underperforming, but it represents a glance into the future, future demand for an integrated community as well as getting away from the 20th century model of suburban life," he said.

Potential for the project, a partnership between the Clarksville Redevelopment Commission and Denton Floyd Real Estate Group, came to light in late 2017. Town Building Commissioner Rick Barr said his office had inspected the business and found it had no working fire alarm system, and the owners had opted to close rather than remedy the violations cited.

In 2018, the real estate group projected cost for renovations to be about $3.1 million. To incentivize this, the redevelopment commission kicked in around $660,000, which redevelopment director Dylan Fisher said is expected to be paid pack to the town over about seven years through an increased property tax. The higher tax percentage will continue for another 10 years after that, bringing in new revenue to the town.

Rent for the lofts, each a one-bedroom with roughly 500- to 600-square feet, is between $700 to 780 per month. This price includes water, sewer and trash service, as well as cable and internet. There is also a stackable washer and dryer in each unit.

"Denton Floyd is also allowing us to provide a different price point, something we really need in our community," Stonecipher said. "We know we have a shortage in housing supply as well as a shortage of price points."

Denton Floyd President Mitch Collins said that as of Tuesday, there were 18 units already occupied with five more leases signed. He expects the lofts will be about 75 percent full by the end of October.

"Providing a variety of housing options is important in every community," Wendy Dant Chesser, president and CEO of One Southern Indiana, said. "And one-bedroom apartments geared toward the millennials who have a dog, who enjoy their downtime and yet can be right in the middle of everything Clarksville has to offer, is a really good addition not just for [the town] but for the region as a whole."