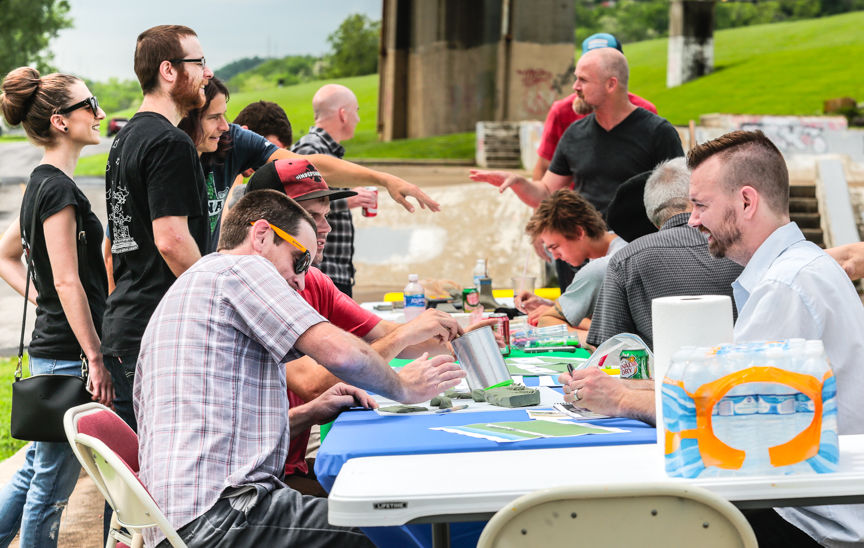 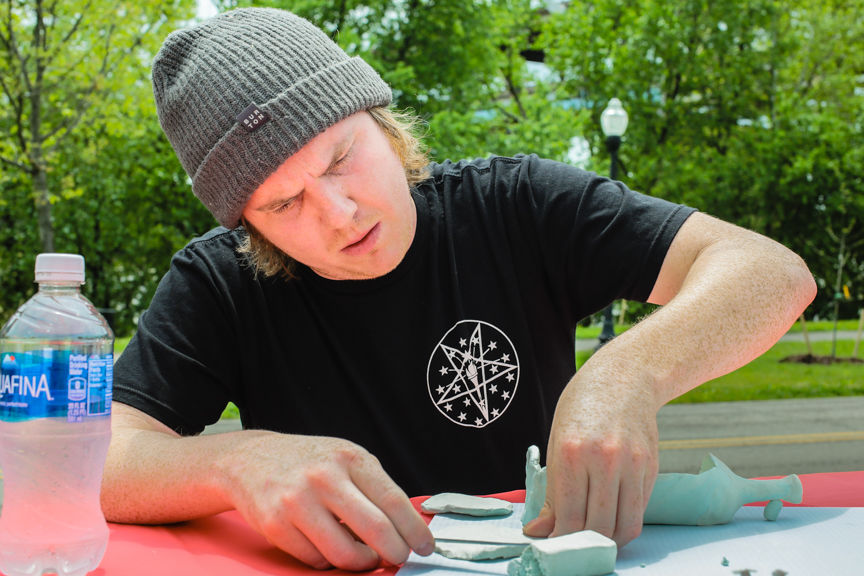 New Albany BMX rider Jake Denham flattens clay into an idea he has for the New Albany Riverfront Skatepark. 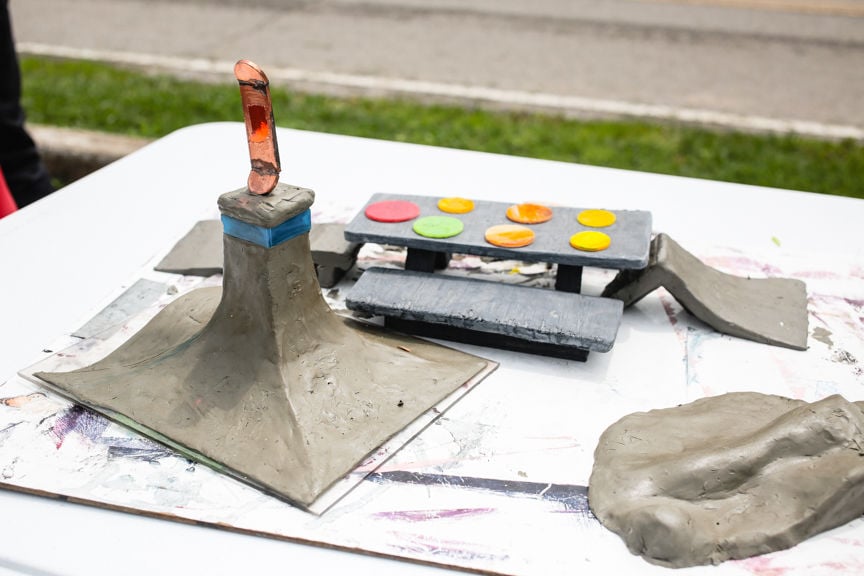 These clay concepts for ramps and a picnic table may get built at the New Albany Riverfront Skatepark. 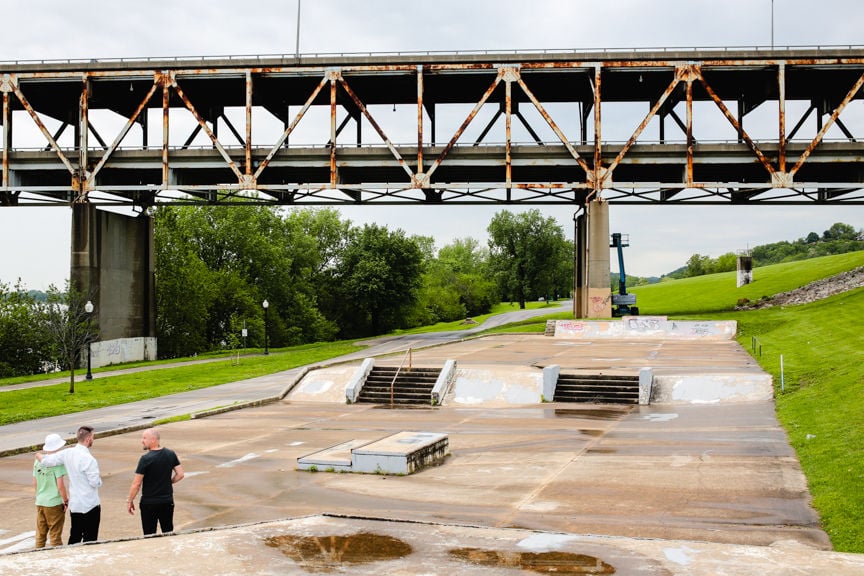 The New Albany Riverfront Skatepark is located underneath the Sherman-Minton Bridge.

New Albany BMX rider Jake Denham flattens clay into an idea he has for the New Albany Riverfront Skatepark.

These clay concepts for ramps and a picnic table may get built at the New Albany Riverfront Skatepark.

The New Albany Riverfront Skatepark is located underneath the Sherman-Minton Bridge.

NEW ALBANY — A collaboration to transform New Albany's riverfront skatepark is currently in the works.

On Saturday, the Carnegie Center for Art & History hosted a brainstorming session for the community to share ideas about how the park can be improved.

"Today, we invited anyone from the community who's interested in the skatepark." said Daniel Pfalzgraf, curator at the Carnegie Center. "The park is a little old and worn down. It's been around since the '90s. We want to fix some of the things that aren't quite right with it and add new features. We want to do it in a way that's visually stimulating so people walking along the top of the flood wall will see this interesting visual piece of artwork. It's also an opportunity to come down here and engage with art, skating it and figuring out ways creative ways of navigating through the features of the space."

The plan is to transform the park into a skate-able work of public art. In order to do that, Pfalzgraf wants input from a variety of members of the surrounding community.

"We want to have kids, skaters, art students, grandparents, whoever to submit ideas of things that they think will look cool," Pfalzgraf said. "Sculptural works that can be skated, things like that. We want to have that personal buy-in to this space and the city. In 10 or 20 years, somebody can be walking by with their kids and say they helped design that."

Art supplies were brought to the park to allow those in attendance to present their ideas.

"We wanted people to come out in the space and see the spacial relationships," Pfalzgraf said. "We wanted them to see things that like or don't like about it, things that can be improved. Hopefully collectively as a group we can come up with new ideas. We have modeling clay. They can draw on top of sketch-ups of the schematics. We have sidewalk chalk so they can actually draw on the concrete itself."

Joining the Carnegie Center and community in the project is the Bloomington-based company Hunger Skateparks.

"I built skateparks for other contractors all over the country and the world," said Bart Smith, co-owner of Hunger Skateparks. "I'm from Indiana, so when I come home and see these substandard parks, I realized I don't need to go to Colorado or New York to build skateparks. They already have good skateparks. I need to stay here in Indiana. That created Hunger Skateparks five years ago. Since then, we've been building parks all around Indiana and trying to make the parks better around here."

Smith said Hunger Skateparks first became involved in the New Albany project last fall after talking with Pfalzgraf and others from the Carnegie Center.

"They expressed interest in skate sculptures, so that's what this is all about," Smith said. "This could be a whole new park. We're focusing on elements that are sculptures but also work well with skateboarding and bikes. It's kind of a mix of both worlds. It's mainly for skateboarding. Kids can run on it and play on it, but it's a sculpture, too. It'll be something to look at."

In addition to designing the park, Pfalzgraf said a lot of work will also go into finding the funds to construct the park.

"The city is going to be chipping in on it," Pfalzgraf said. "Some of our own money from the Carnegie Center is going to go into it. We're applying for grants. We're looking to private organizations for sponsorship opportunities. For crowdsourcing opportunities, we're looking at something similar to a buy-a-brick campaign. We'd like to see if we can get any kind of company that can supply concrete or wood to build the forms and donate it. We'll be looking for community help for the actual construction of it. That'll help keep costs down."

Local skateboarder Matt Brewer said he has been skating at the New Albany park since right around the time it was built. In his 17 years of skating, he's noticed that a lot of things in the park have gone into disrepair, and he would like to see that change.

"Hopefully people will see that this isn't just about kids down at the skatepark grinding," Brewer said. "It's incorporating art inside of it. It's something to look at. When people walk down here, they won't just see a big slab of gray. The park has been kind of forgotten about."

Brewer said he was happy to see the project finally coming together, and he looks forward to seeing what gets built.

"With this whole initiative with art and adding objects, it's stuff that can be done that's relatively cheaper than building a giant, full park," Brewer said. "With putting things here and there and color, it'll be nice. It's been something I've been looking forward to for years."