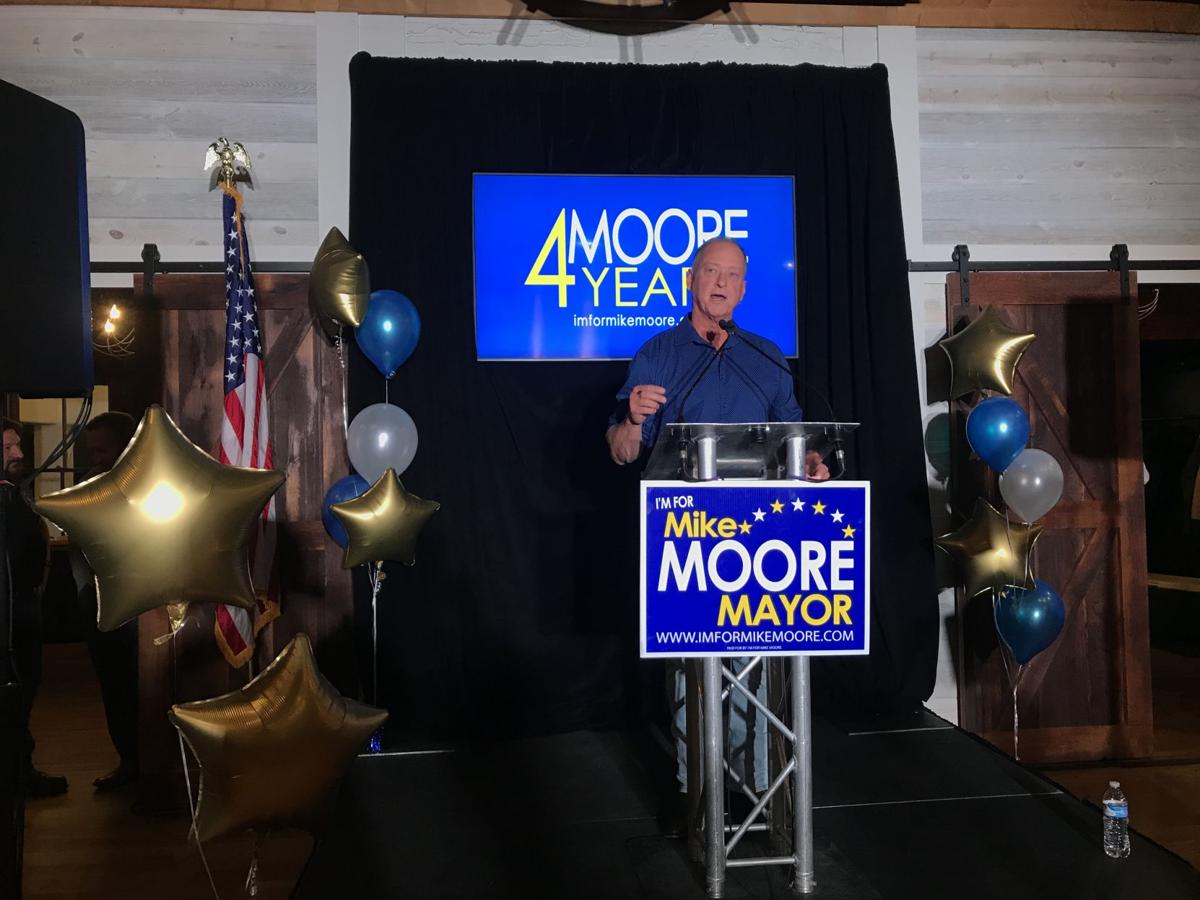 Mayor Mike Moore won his third term in convincing fashion in 2019, picking up roughly 70 percent of the overall vote. 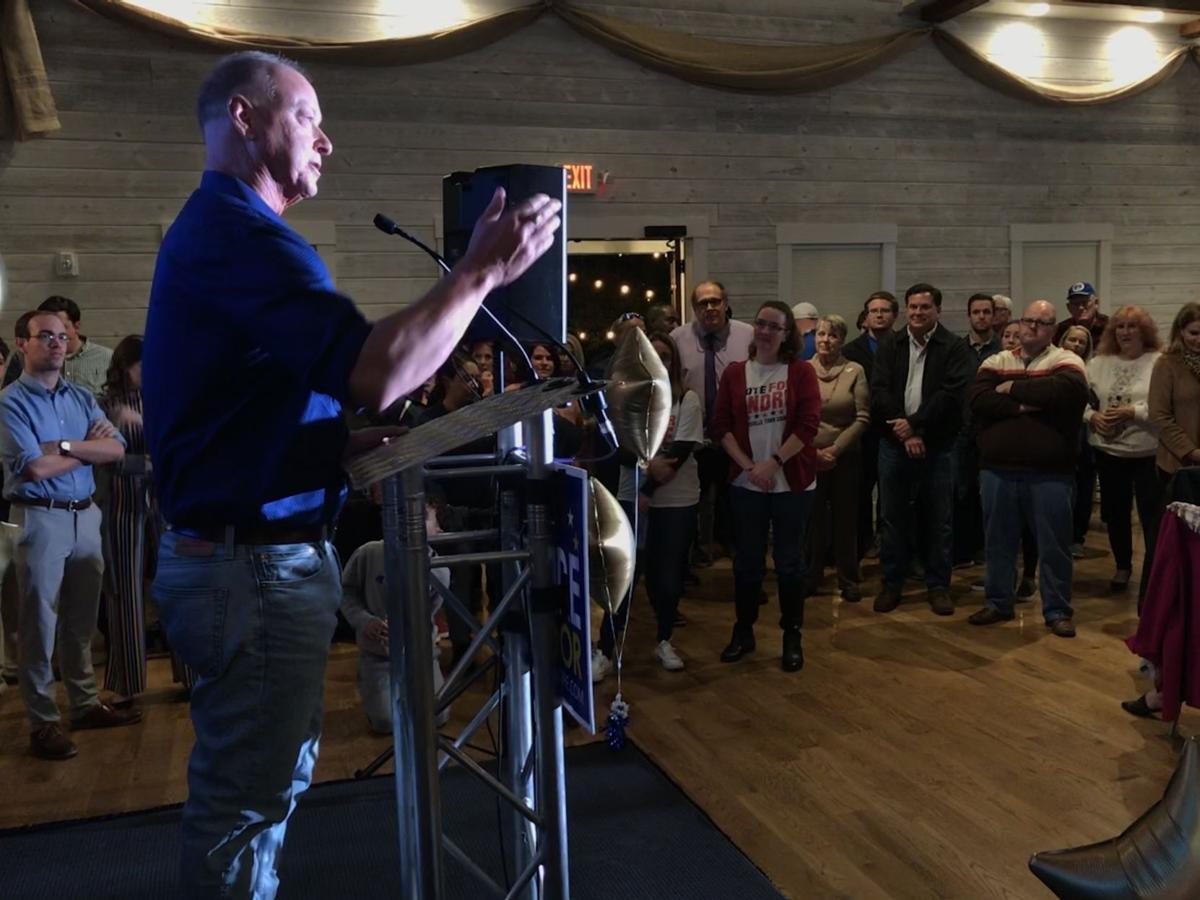 Mayor Mike Moore addresses a packed house of supporters at the Howard Steamboat Museum after winning his third term in Jeffersonville.

Mayor Mike Moore won his third term in convincing fashion in 2019, picking up roughly 70 percent of the overall vote.

Mayor Mike Moore addresses a packed house of supporters at the Howard Steamboat Museum after winning his third term in Jeffersonville.

JEFFERSONVILLE — The top office in the City of Jeffersonville will continue to be held by Mayor Mike Moore for four more years.

Moore won his third term in convincing fashion, with his 8,331 votes dwarfing the 3,701 picked up by Democratic challenger Tom Galligan.

"Jeffersonville is still 54 percent Democrat," Moore said. "I take a lot of pride in knowing a large number of Democrats voted for us. I think that's because we've never let party affiliation factor into decisions that are made for the city."

When he faced off against Galligan in 2011, Moore won by a margin of six percentage points. In 2015, that figure jumped to eight points.

During his victory speech to a packed house at the Howard Steamboat Museum, Moore said he hoped to win by a margin of 10 percentage points this time around. The mayor was surprised to see that he had won by a whopping 40 percent.

"I never thought something like that would happen," he said. "Honestly, I think it's a great thing for Jeffersonville. That means that a strong majority of the people are buying into what we're doing. If people are happy and people are together, only good things are going to happen."

Moore also made it a point to use a portion of his speech to acknowledge Galligan's service to the city in the past, as well as his efforts during the campaign.

Galligan was vying for his fourth term, having served as the city's mayor from 1996 to 2003, then again from 2008 to 2011. Though he didn't get the results he wanted Tuesday, he still gave thanks to those who have supported him during his campaign. He added that he still plans to serve the citizens of Jeffersonville in any way he can.

"I appreciate the confidence that the people who voted for me had in me, although the majority of the city wanted Mike Moore," Galligan said. "I gave them an option, and they chose Mike. I did the best I can do. I look forward to getting on with my life, and I hope the city does well."

The large margin separating the two candidates, Moore said, can partially be attributed to the generational success his family has found in the city as small business owners of Jerry's Restaurant. He added that he doesn't hide from his constituents. Rather, he does his best to come and meet them in their own neighborhoods.

By holding neighborhood meetings, he said his administration is able to tackle small problems before they grow into larger, more complex issues.

"It helps people who normally wouldn't get involved with city or public meetings," he said. "If you go into somebody's neighborhood and tell them to bring a lawn chair and sit down and talk, you see a lot of people you don't typically get to see. You hear questions that you otherwise wouldn't come across."

Now that he has secured four more years in office, Moore said he plans to get right back to work. Some of the biggest projects on his list are Holmans Lane and Chapel Lake Park. River Ridge is also a point of emphasis, as much of the land in the commerce park has yet to be developed.

Perhaps the biggest thing he looks forward to, though, is witnessing the first class of students who will get college degrees through Jeffersonville's Promise, which helps graduates of Jeffersonville High School pay college tuition.

"One of the most satisfying things that I'll get to watch in the coming years are students graduating from Jeffersonville's Promise, being able to build a career here in the City of Jeff and raise their families here," Moore said. "I love going out and seeing the kids. I want them to know that Jeffersonville is deeply invested in them, and that there's a future for them here."

Between hugs and handshakes from his supporters, Moore listed some of the things he's been able to do as mayor, such as improving the quality of life in the city by constructing new parks. All of that, he said, has been accomplished without raising taxes — something of which he is very proud.

"I'm so doggone proud of Jeffersonville," he said. "I love to call it my hometown. I feel like I'm the luckiest guy in Clark County."