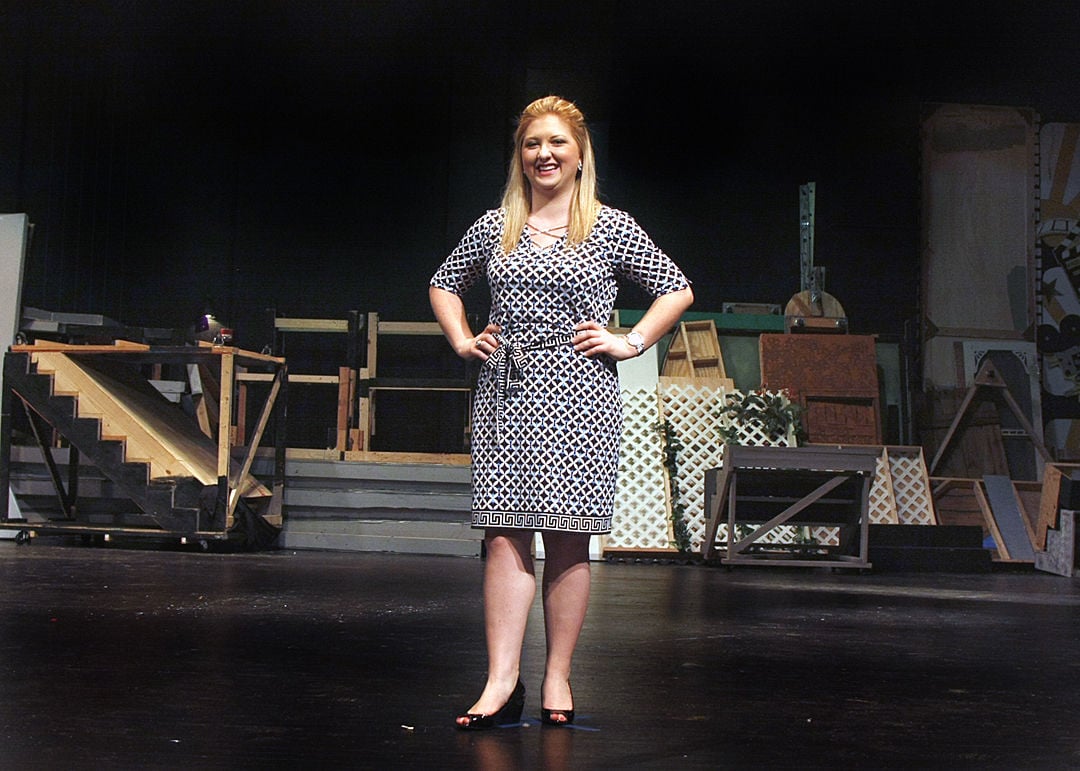 Amy Harpenau is the new director of theater arts at New Albany High School. Harpenau is a 2007 graduate of Floyd Central High School, has appeared on stage at both high schools and worked in theaters since she graduated college. 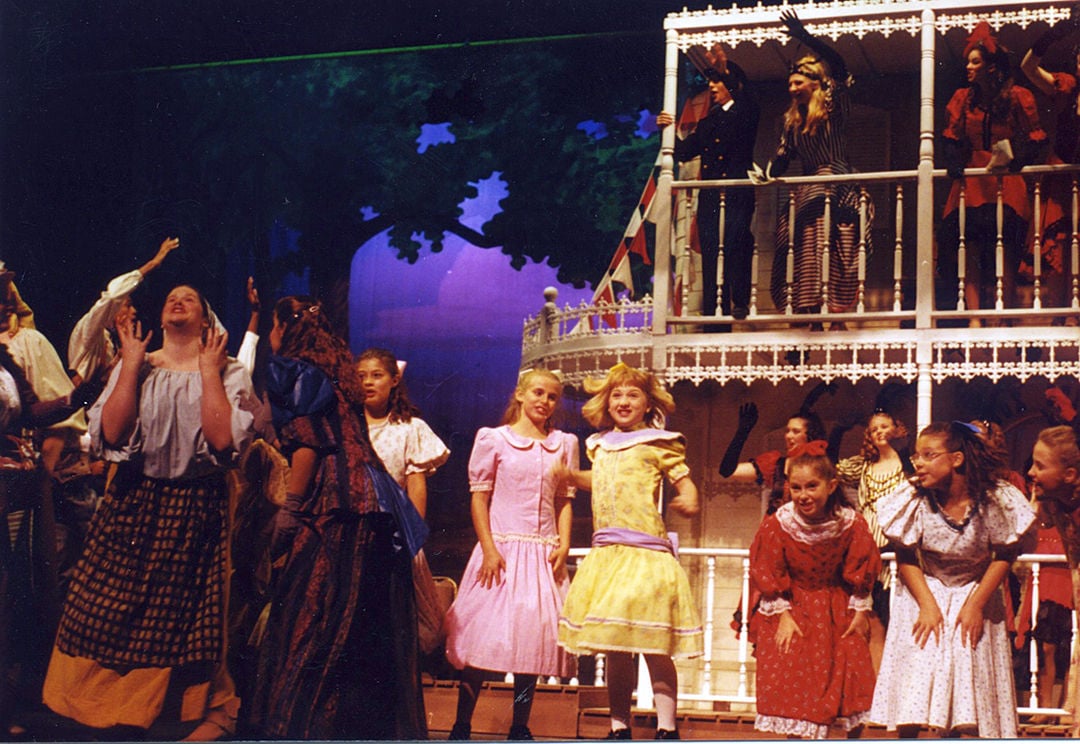 Amy Harpenau, center, right, was in New Albany High School's 2000 production of "Showboat," the first show on its newly constructed stage. Harpenau said she has a lot of history with the theater programs at New Albany and Floyd Central High School.

Amy Harpenau is the new director of theater arts at New Albany High School. Harpenau is a 2007 graduate of Floyd Central High School, has appeared on stage at both high schools and worked in theaters since she graduated college.

Amy Harpenau, center, right, was in New Albany High School's 2000 production of "Showboat," the first show on its newly constructed stage. Harpenau said she has a lot of history with the theater programs at New Albany and Floyd Central High School.

For the last three years, she’s lived the gypsy lifestyle and hopped from train to train to get where she was going, mostly to different theater jobs.

“I have no problem with the time dedication,” Harpenau, a 2007 Floyd Central High School graduate, said. “When you grow up here, you just know how it goes. I can tell you I was looking at a nice little sofa for [my office], and I’m not going to lie; the thought crossed my mind that a sleeper sofa might be a good idea.”

The program has a reputation for  national and international recognition, professional-grade productions and giving its graduates a foot in the door to careers on stage and the silver screen.

Because of that, it’s also known among its former leaders to demand most of their free time. After acting on the stage she now manages, she said giving up that time won’t feel like a sacrifice.

“This is a lifelong dream and a gem of a job that only comes once in a lifetime,” Harpenau said. “It’s not work, even when it is. Even when the blood, sweat and tears are coming out, it’s just not work, it’s something you can’t let go.”

At 25, Harpenau is close to the age David Longest was when he took over the program. Longest retired from the position in 2012 after about 30 years in the program.

He said the school’s 2000 production of “Showboat” featured Harpenau on the newly constructed stage. Seeing a student he worked with taking over the program, even though she attended and graduated from Floyd Central, is nice for him.

“I think it’s great,” Longest said. “It makes me feel a lot more comfortable knowing that someone is there who’s very knowledgeable about the program. She really knows the history of both programs and seen them in the golden age.”

After going to the International Thespian Festival — an annual, invitation-only theater festival for high schools across the country — with Floyd Central, she graduated from Ball State University with her bachelor’s in musical theater. She worked in theaters in New York, Ohio, Michigan and other states from there.

Harpenau said her experience isn’t just on stage, she’s also worked behind-the-scenes, which she said will tie into some of the curriculum of her classes. She served as a props master in Augusta, Mich., at The Barn Theatre.

That, along with the lighting grid nearly complete on the Tom Weatherston Studio Theater in her classroom, she can help students get hands-on experience with putting together everything on a stage.

“I really want to get the kids into being student designers,” Harpenau said. “That’s, again, where the studio theater is the perfect place where they start in class working on something on a smaller scale. Then, as they progress in those upper level classes, then they’re moving to the bigger stage.”

BRINGING THEM BACK IN

But on the big stage, students will have help from a familiar organization. Harpenau said she’s reforged a partnership with Dads With Tools, which has helped Floyd Central and New Albany high schools with set building.

She said she was friends with his daughters and took dancing classes with them from Bette Weber Flock, who is also back to help with choreography.

Harpenau said she’s got a great knowledge and respect for the program’s pedigree, as well as a few ideas on how to build upon it.

“I always tell people we’re going to honor those rich traditions that we all know and love, but it’s also important to take those and move on, develop new things as I look at the programs in the region and the country,” Harpenau said. “Of course, we’re going to do those big musicals every spring and every fall, not only for the kids, but for the community.”

She said building up some funds for the program is an important part of her job. While the musicals are likely to be the moneymakers that bring in audiences and this year’s schedule isn’t finalized, she said she wants to give the students the chance to try new productions to expand their talents.

“I also have to find a way to meet both their expectations and the community because they’re used to seeing professional productions like you would see elsewhere out of the school,” Harpenau said. “That’s something that’s really important to me, getting back to that community perspective and getting them back in to see the shows they knew and love.”

But she said with the old partnerships rekindled with helpful organizations and businesses, she’s excited to get everything going again.

“I have a plan and I’ve got a good support system, so I think we can definitely manage gearing up this year,” Harpenau said. “We’ll do a little of the past, a little of the future and then each year, we can start to build on that from there.”She’s also a colleague of Robby Steiner’s, the director at Floyd Central High School. She guest directed their production of “Pride and Prejudice” in April. She said while it may not happen this year, she’s looking forward to partnering up with Stiener to start joint productions with the two schools again.

NAHS Principal Janet Page said it’s great to have a former district student taking over the program and is excited for the upcoming season.

“Clearly, she’s an asset because she grew up on the NAHS stage, that was her first performance opportunity, on the old stage,” Page said. “She goes way back with the history of the program, knows what musical theater is at New Albany, knows what the community expects about that.”

Harpenau said this job is a big deal to her, but she hopes she can continue to make the program a big deal for the students she’ll teach, even if it means getting some use out of a sleeper sofa in her office.

“When you see them achieve a goal, there’s nothing more rewarding,” Harpenau said. “Big, splashy musicals are awesome, but so many more things happen behind that. Giving someone a role who’s never been able to step up to the plate and do that, then they prove themselves, there’s nothing more rewarding than seeing those kids succeed. If that means I spend the night on the couch in here, that’s the small price for growing something like this.”