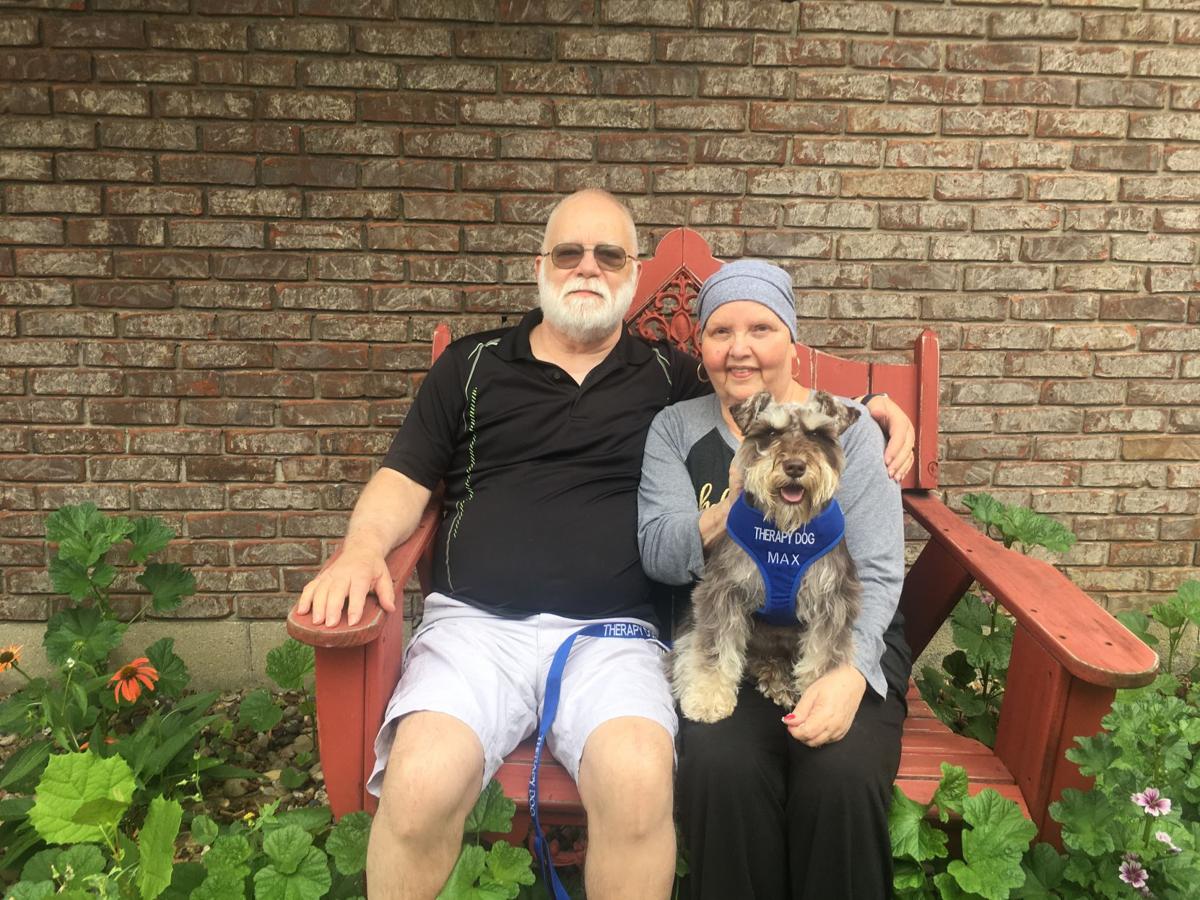 Dickie and Phyllis Wilkins and their therapy dog, Max, sit in their garden at their Jeffersonville home. Both are struggling with medical issues — Phyllis has stage 4, triple negative breast cancer, and Dickie has chronic heart failure and will need a heart transplant. Their family is organizing a golf scramble to raise money for costs associated with their medical care at Vanderbilt University. 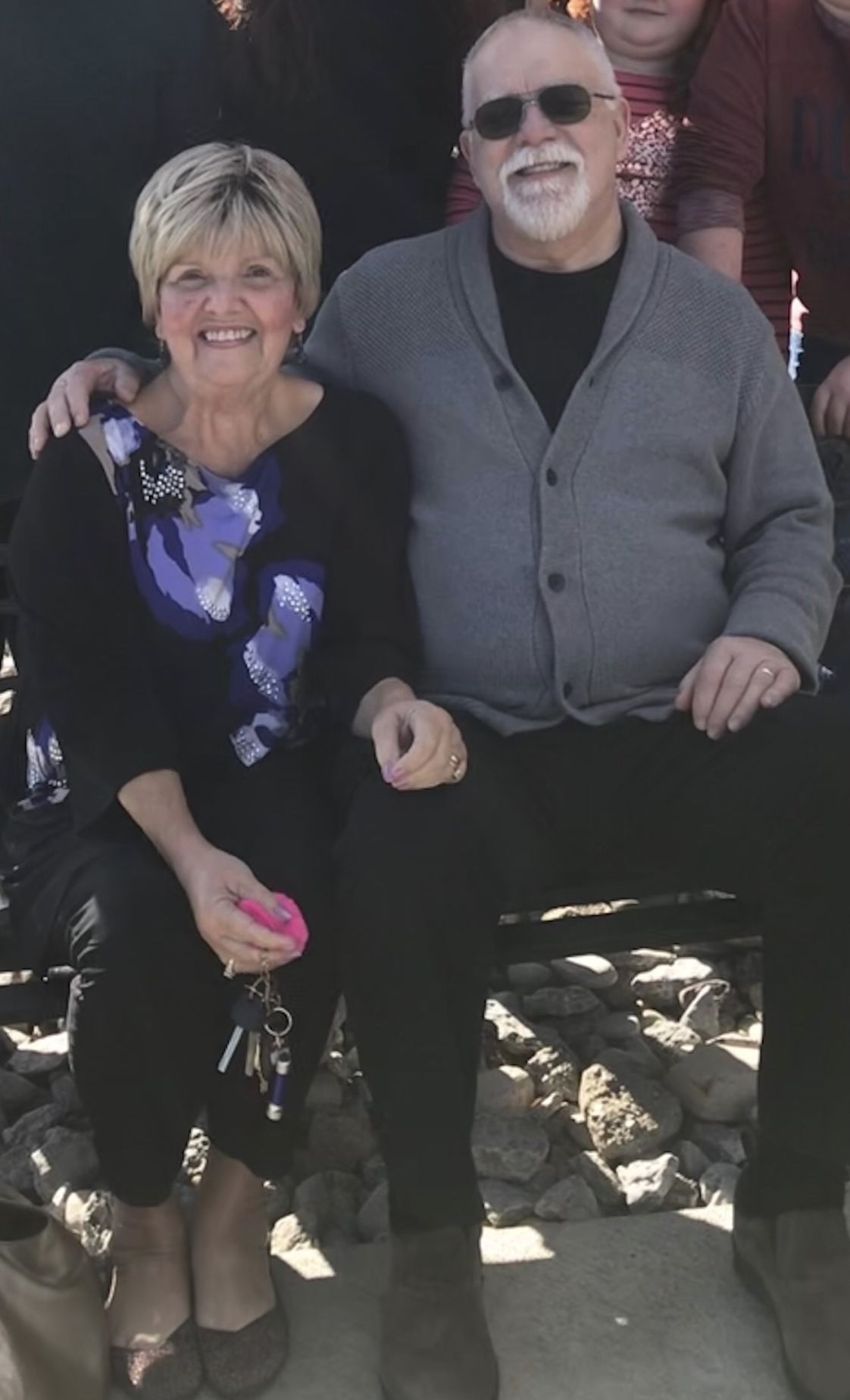 Jeffersonville couple Phyllis and Dickie Wilkins are both struggling with medical issues — Phyllis has stage 4, triple negative metastatic breast cancer, and Dickie has chronic heart failure and will need a heart transplant. Their family is organizing a golf scramble to raise money for costs associated with their medical care at Vanderbilt University. Submitted photo.

Dickie and Phyllis Wilkins and their therapy dog, Max, sit in their garden at their Jeffersonville home. Both are struggling with medical issues — Phyllis has stage 4, triple negative breast cancer, and Dickie has chronic heart failure and will need a heart transplant. Their family is organizing a golf scramble to raise money for costs associated with their medical care at Vanderbilt University.

Jeffersonville couple Phyllis and Dickie Wilkins are both struggling with medical issues — Phyllis has stage 4, triple negative metastatic breast cancer, and Dickie has chronic heart failure and will need a heart transplant. Their family is organizing a golf scramble to raise money for costs associated with their medical care at Vanderbilt University. Submitted photo.

JEFFERSONVILLE — Dickie and Phyllis Wilkins have served Southern Indiana for more than 25 years, and as both face medical issues, their family, friends and others in the community are working to help them out and show their support.

Their family is organizing a golf scramble to raise money to help the Jeffersonville couple with the medical and living expenses related to their treatment at Vanderbilt University in Nashville. Dickie was diagnosed with advanced chronic heart failure in May of 2018, and he is currently being screened for a heart transplant. About 10 months later, Phyllis was diagnosed with stage 4, triple negative metastatic breast cancer.

The golf scramble will take place Sept. 29 at the Hidden Creek Golf Course in Sellersburg. Ryan Brown, Phyllis's son and Dickie's stepson, is organizing the fundraiser with his three siblings, along with their spouses and children. Community members are supporting the fundraiser through financial donations and sponsorships, and the family hopes to raise at least $5,000, he said.

Brown said he hopes by raising money for living and medical expenses, they can ease their parents' anxiety about financial matters. Dickie and Phyllis are traveling to Vanderbilt for treatment at least every three weeks, and they will likely be there for at least nine weeks when Dickie has a heart transplant.

"There’s just no way you can know how substantial the financial impact is going to be, but the last thing any of us want our parents worrying about right now is ‘am I going to be able to pay for this,’" Brown said. "They shouldn’t have to worry about that."

He said his parents have devoted their lives to Clark County, and they now "need Clark County to rally around them." So far, the event has received support from community members and organizations who are happy to help Phyllis and Dickie, he said, and many have been asking how they can help.

"I so value [my parents'] vulnerability in saying hey, we know we can't do this alone, and allowing their kids, their grandkids and now the community to rally around them," Brown said. "I think that's an important lesson, because I think too often we're afraid to ask for help. These are two people who spent their lives helping everybody else, so this is a different experience for them for sure."

IN SICKNESS AND IN HEALTH

At first, the family was "totally zeroed in" on Dickie's heart failure after he was diagnosed, Phyllis said. He has been deferred for a heart transplant, since doctors want him to keep his original heart as long as they can before the transplant. He still needs to go through cardiac rehabilitation and lower his blood sugar, and doctors have to monitor his health on a regular basis.

At first, Phyllis was hoping to serve as her husband's primary caregiver, and it came as a complete shock to them when she was diagnosed with breast cancer. She started chemotherapy immediately for about 12 weeks before it stopped working, and she was eventually admitted into a clinical trial at Vanderbilt involving both immunotherapy and chemo.

Throughout their marriage, the couple has been a team, and as they have face these challenges, they always remain side by side. They have taken care of each other and gone to each other's doctors' appointments.

"We made clear from beginning, we’re a team," Phyllis said. "Unless the doctor specifies [they] want to see only the one of us, then we’re going to be together."

"My goal every day is just to do whatever I can to make Phyllis’s life better and make her happy and meet whatever needs she has, and she does the same for me," Dickie said. "It seems to have worked over the years."

Their kids have been taking them to their treatment in Nashville, and they make sure the trips are adventures, Phyllis said. The family, which they refer to as "Team Wilkins," is happy to spend so much time together, and they go to Vanderbilt as an "entourage."

"We all have busy lives and kids who do things, so when you spend six hours together in a roundtrip to Nashville, you get a chance to just talk about stuff and laugh and cry and pray together," Brown said.

Phyllis said they're not used to being on the "receiving end" of help when it comes to the upcoming benefit — she has a long history of community service, and she has organized golf scrambles and other types of fundraisers through her own work with nonprofits throughout the years.

It took some tough discussions and prayer to conclude that they were going to need help, she said, and they are thankful to everyone who is participating in the upcoming event, she said.

"We have said the old cliche that every parent says — that we don’t want to be a burden to our kids," Phyllis said. "Well, we said that too, but our kids reassure us constantly that it’s a privilege to them to be able to help us, and they’re such a big part of our lives."

Brown described Phyllis and Dickie as best friends "who hold so tight to each other."

"They are living out 'in sickness and in health,'" Brown said. "That is 100 percent what this is. And they have not wavered in that at all."