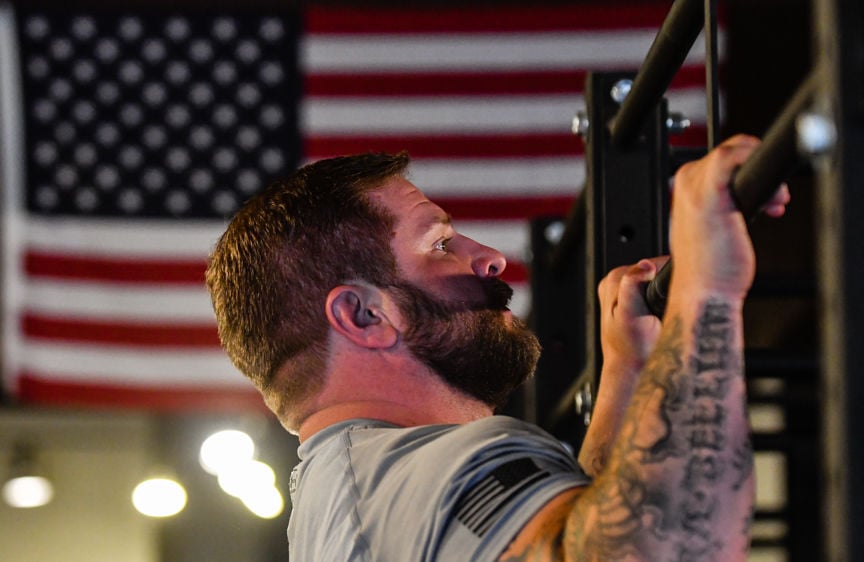 Head coach Adam Smith pulls himself up to a bar while working out at Graystone Performance in downtown New Albany on Wednesday. 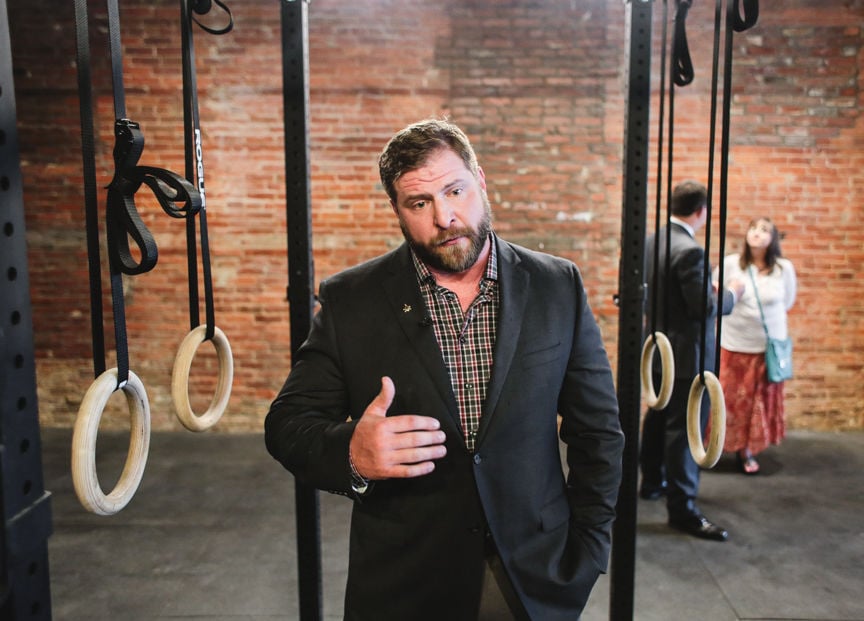 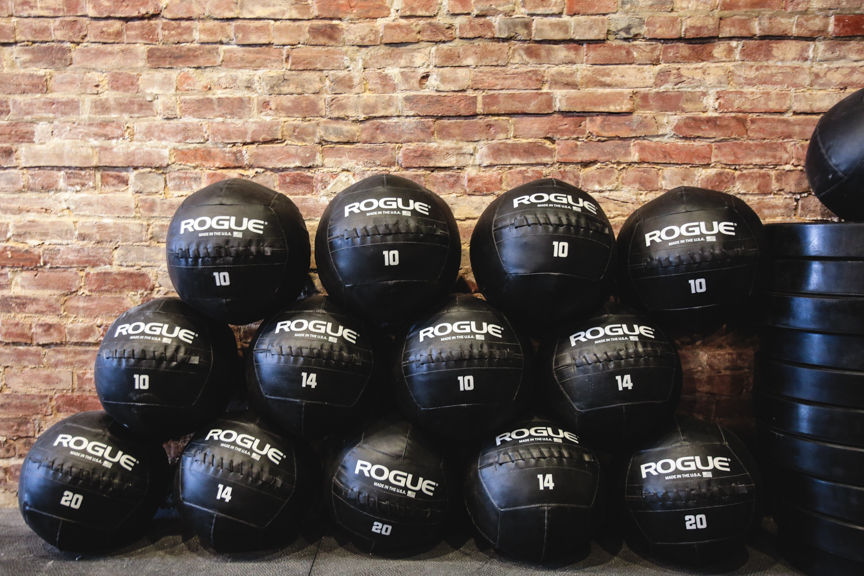 A stack of medicine balls rests up against a wall at Graystone Performance in New Albany. 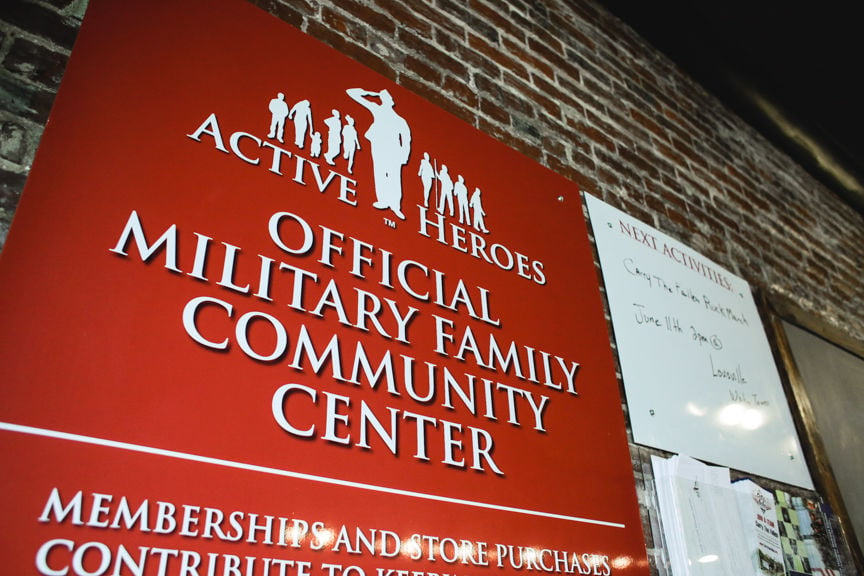 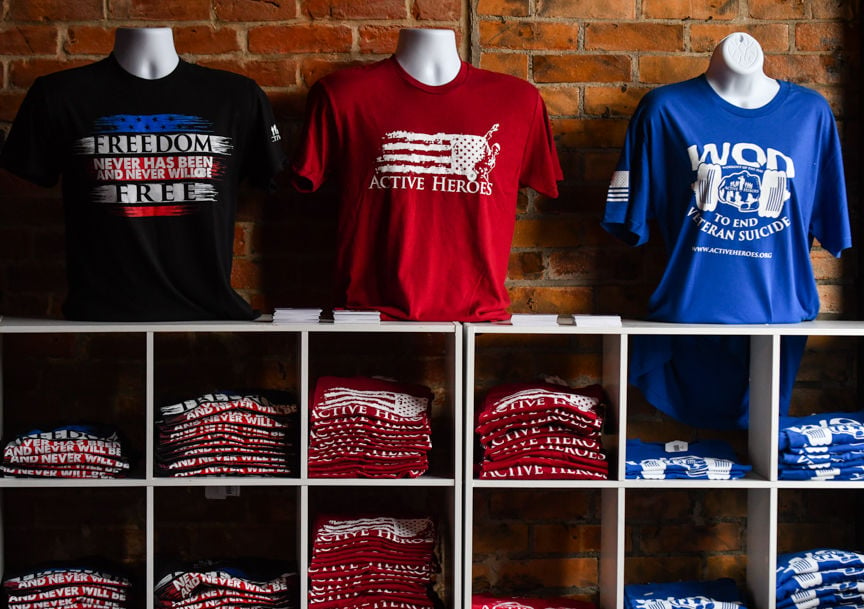 Shirts supporting veterans are displayed and can be purchased at Graystone Performance in downtown New Albany. 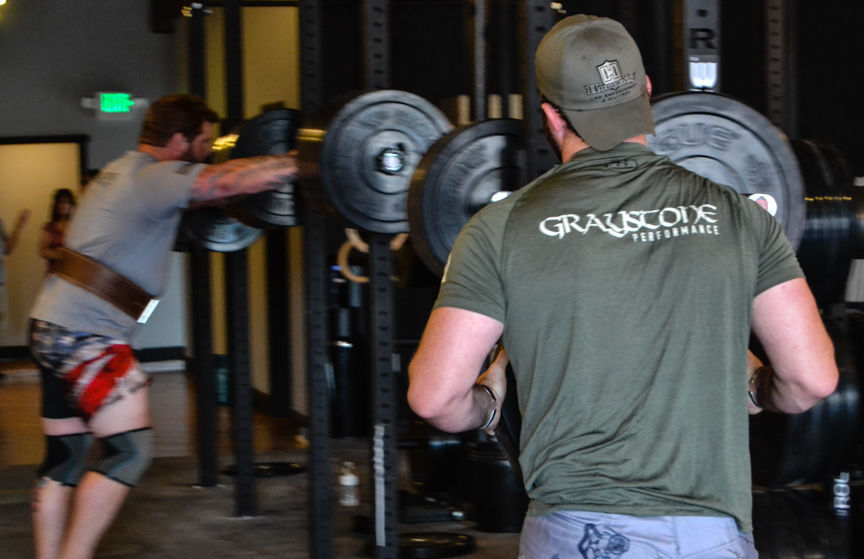 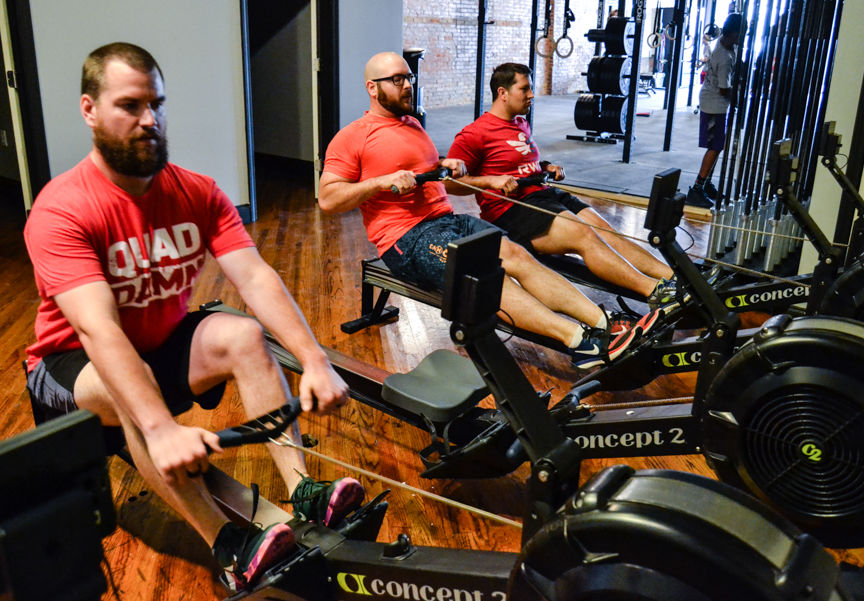 Left to Right: Damon Stacey runs through repetitions on the rowing machine with Chris and Nick Eason while working out at Graystone Performance. 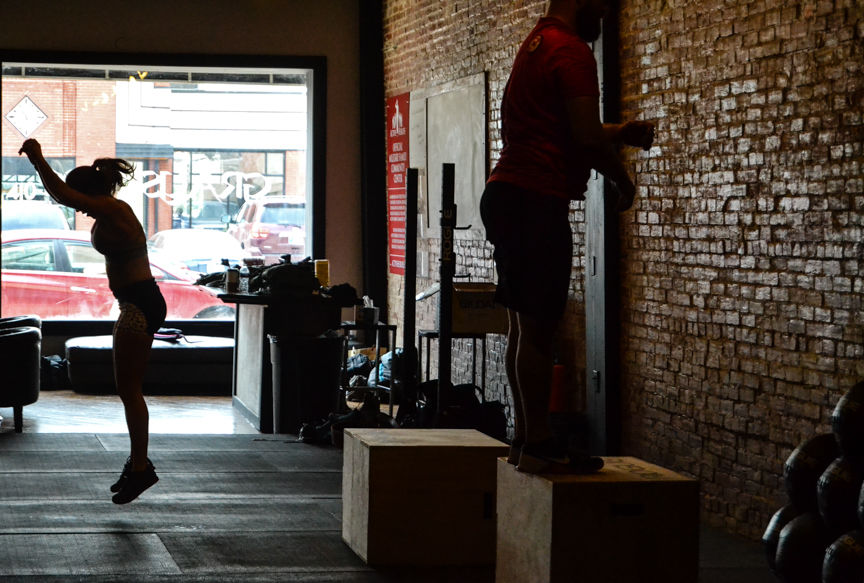 Clients work through drills on the mats at Graystone Performance in New Albany.

Head coach Adam Smith pulls himself up to a bar while working out at Graystone Performance in downtown New Albany on Wednesday.

A stack of medicine balls rests up against a wall at Graystone Performance in New Albany.

Shirts supporting veterans are displayed and can be purchased at Graystone Performance in downtown New Albany.

Left to Right: Damon Stacey runs through repetitions on the rowing machine with Chris and Nick Eason while working out at Graystone Performance.

Clients work through drills on the mats at Graystone Performance in New Albany.

NEW ALBANY — When Adam Smith finished up his 16-year career as a Green Beret in the U.S. Army, he wasn’t at his best.

What was the magic cure-all? Working out, according to Smith.

Smith and his business partners, who own the recently-opened GrayStone Performance, wanted to give other veterans the opportunity to heal through activity. That’s why they’ve teamed up with Active Heroes, a Louisville-based organization dedicated to ending veteran suicide. The two groups have opened a CrossFit-esque gym and community center for civilians, veterans and their families at 141 E. Main St., New Albany.

Active Heroes has always focused on providing health-related services to veterans. A worthy cause if you ask Smith.

“I personally don’t know of any veteran that came from my background that hasn’t had one issue or another,” he said. “Whether its reintegration, whether its health and fitness issues, hormonal balances, anxiety issues, depression — all of that ties into one another.”

Seventy-two percent of veterans rated their health as good or better in 2009 and 2010, according to a study by the Department of Veterans Affairs, but many veterans still struggle with health issues as a result of their service.

Approximately 22 veterans die by suicide every day, and 20 percent of national suicides are committed by veterans, according to a VA study. The VA also lists traumatic brain injuries, or TBIs, hepatitis, HIV/AIDS, the pandemic flu and other medical conditions as issues that may affect veterans.

Exercise has been shown to help veterans with their health, at least when it comes to suicide. In one study of 346 veterans, those who exercised had lower levels of depressive symptoms and higher sleep quality. Smith is well-versed in the benefits of getting active.

The list could go on, but Smith doesn't. He's the head coach at Graystone Performance. The gym will offer CrossFit and other types of high interval training to anyone who wants a membership, as well as treatment rooms for acupuncture and massages. Occasionally, the gym will transform into a meeting space for veterans and their families to participate in “free healing activities,” including yoga, workouts, music lessons, family events and seminars.

GrayStone Performance memberships are discounted for veterans and active duty military members. A portion of the money made by memberships is donated back to Active Heroes.

Active Heroes is a national organization that provides services across several states, including a peer mentorship program. In Kentucky, the organization has a retreat for veterans who suffer from post-traumatic stress, as well as a Louisville community center with talk groups, self-defense classes, dog training, jin shin jyutus courses and more.

One thing it was missing a gym, said Troy Yocum, the organization’s founder and president.

“We knew that was a needed thing,” he said. Needed because the community center’s current fitness programming wasn’t drawing in younger veterans.

Partnering with GrayStone Performance was the ideal solution. It not only allowed Active Heroes to open another community center, but it helped them do so with limited funds. The gym will be operating as a for-profit business.

Josh Leary, a U.S. Air Force veteran and his wife, Glenda Leary, are happy that a veteran community center is opening so close to them.

They live in Charlestown, an area with few resources for veterans, Glenda said.

“We’ve not been able to connect with anybody,” she said. “…I have worked with organizations on the national level and they’re great, fantastic resources, but it’s not easy to walk in and go ‘Hey, we’re having this today. Can we get some help with this or can I brainstorm with you some ideas? So having that on the local level is nice to see.”

Yocum hopes to continue opening more Active Heroes locations for families like the Leary’s. For now, however, the focus is on GrayStone Performance.