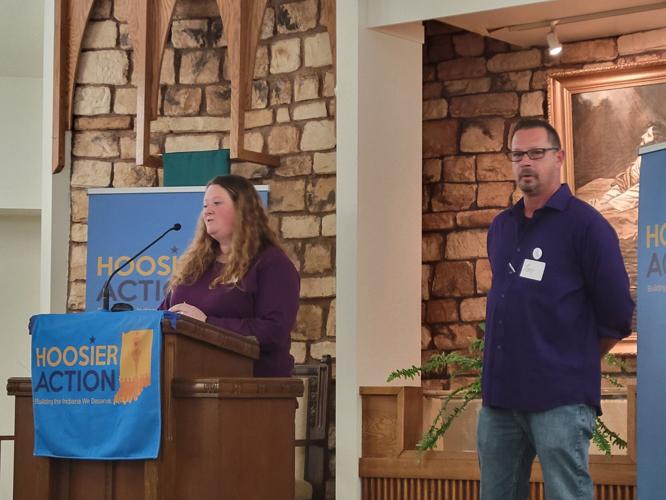 Carissa Miller and Tony Hostetler lead the program by telling the audience about their experience with addiction and how Narcan can save someone’s life from a drug overdose. 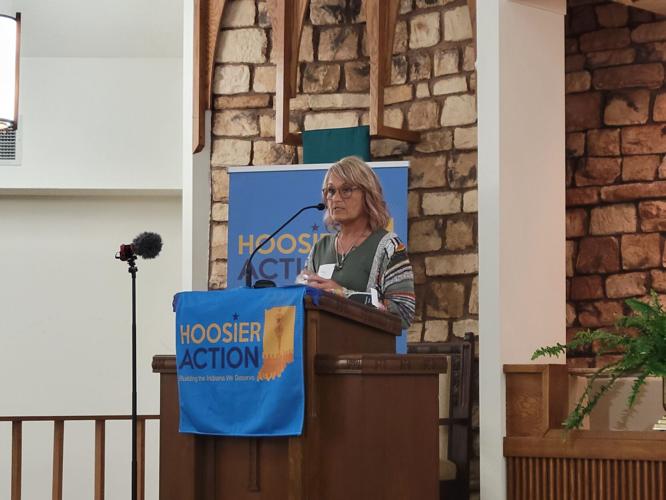 Tracy Skaggs showed the audience how to use Narcan and handed out Narcan to audience members to spread the word and possibly save a life.

Carissa Miller and Tony Hostetler lead the program by telling the audience about their experience with addiction and how Narcan can save someone’s life from a drug overdose.

Tracy Skaggs showed the audience how to use Narcan and handed out Narcan to audience members to spread the word and possibly save a life.

Hoosier Action has made it a mission to put an end to addiction and overdoses in Indiana.

The group met with community members and officials Thursday at Park Christian Church in New Albany to discuss the overdose crisis, how to put an end to overdoses in the community and how to teach people to use Narcan, a treatment for opioid overdoses.

Hoosier Action wants to have all first responders carry Narcan at all times, to equip more local organizations to dispense or carry Narcan and to increase the number of trash cans with syringe disposal in the community.

“We know the only way we can save lives is if we have a shared understanding of what we’re doing and what solutions work,” said Carissa Miller, Hoosier Action Leader. “So this meeting tonight is a space for us to build that collective understanding together as a community.”

“It is the leading cause of death for people under 50,” said Tony Hostetler, Hoosier Action Leader. “It’s killing 18- 20-year-olds, It’s killing a generation.”

Incarcerated people are more likely to die within the first two weeks of being released. To combat the number of people dying after being released and to lower recidivism rates, Hoosier Action wants to incorporate substance abuse treatment into jails.

“When we look at someone who’s been incarcerated, we’ve made this a moral issue and not really about the pain that people experience,” Miller said. “We’ve criminalized people who use substances, we condemn them to die alone from preventable deaths.”

Along with having first responders and more places to receive Narcan, Hoosier Action wants to train more people how to administer Narcan.

Tracy Skaggs, the founder of Project Recovery Southern Indiana, taught everyone at the event how to administer Narcan properly.

“Before I became pro Narcan, for about 40 years of my life, it was the face of addiction, I’m only 50 years old,” Skaggs said. “Narcan is harmless, unless if you have opioids in your system, the only thing it does is reverse the opioids in the brain for a short period of time.”

To prove her point, Skaggs took some Narcan in front of the crowd. She acted as she did before she took it.

If you would like to learn more about Hoosier Action and help combat the overdose epidemic in Indiana, go to their website at https://www.hoosieraction.org/