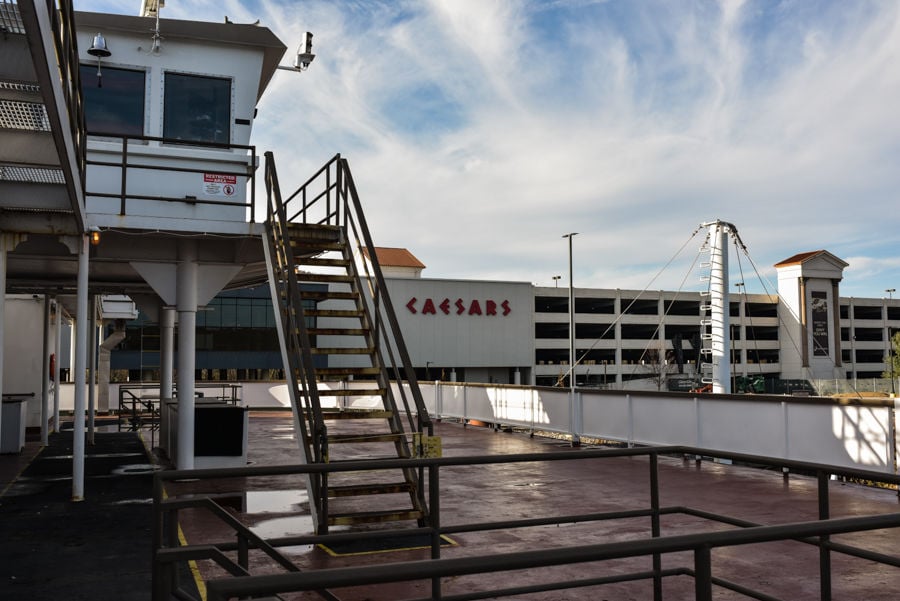 A view from the back of the Glory of Rome shows the Captain's wheelhouse above the deck as the riverboat docks beside the Horseshoe pavilion, soon to be Caesars. 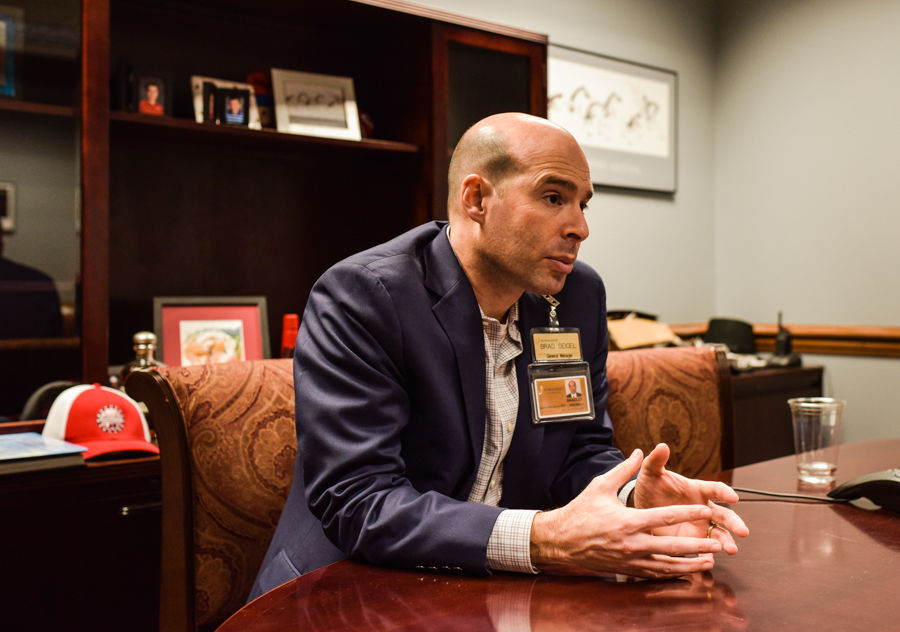 Horseshoe Southern Indiana Vice President and General Manager Brad Seigel talks of the transition from the riverboat to a land-based facility. 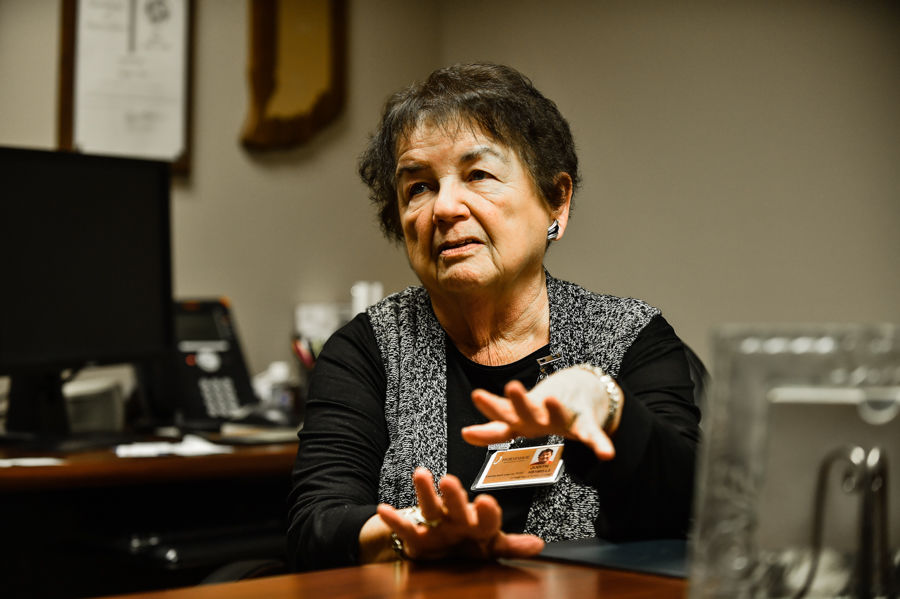 Director of Community Relations Judy Hess reflects on her career with Horseshoe Southern Indiana since she helped to open the facility 20 years ago. 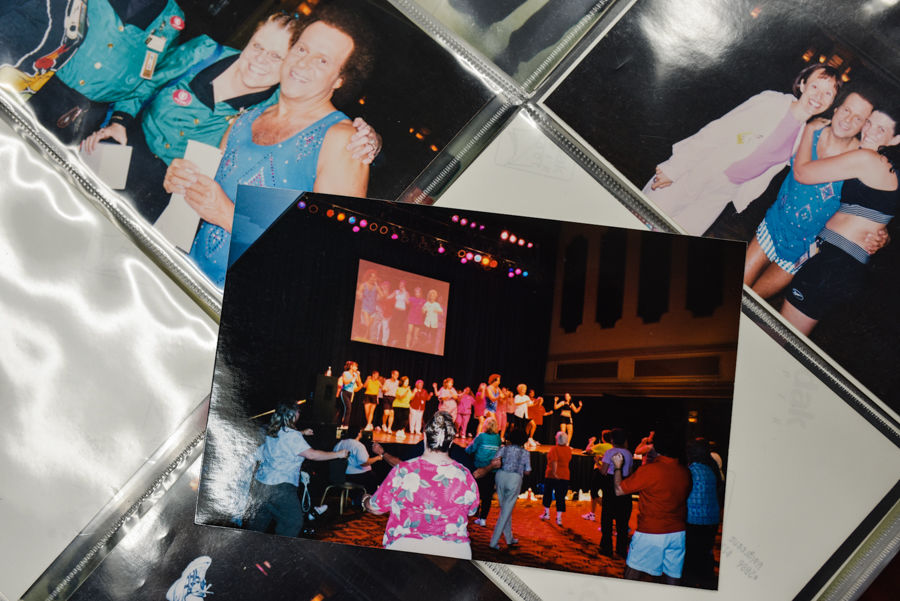 A photograph shows attendees working out with Richard Simmons during his visit to the casino years back. 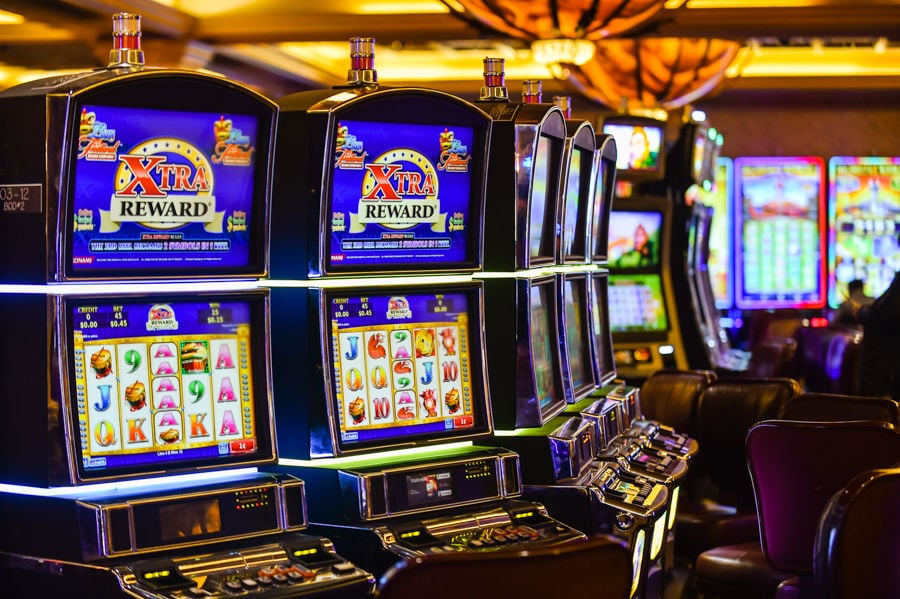 Slot machines await guests on the third floor of the riverboat.

A view from the back of the Glory of Rome shows the Captain's wheelhouse above the deck as the riverboat docks beside the Horseshoe pavilion, soon to be Caesars.

Horseshoe Southern Indiana Vice President and General Manager Brad Seigel talks of the transition from the riverboat to a land-based facility.

Director of Community Relations Judy Hess reflects on her career with Horseshoe Southern Indiana since she helped to open the facility 20 years ago.

A photograph shows attendees working out with Richard Simmons during his visit to the casino years back.

Slot machines await guests on the third floor of the riverboat.

ELIZABETH — When the idea of bringing a casino to Southern Indiana emerged, there was a lot of uncertainty among the local population.

Much of the region's history saw gambling exist in the seedy underground, leaving a bad taste in the mouths of many. Toward the end of the 20th century, multiple referenda to allow riverboat gambling failed at the local levels in Clark and Floyd counties. In Harrison County, however, there seemed to be hope.

"Gaming was so new to Indiana," said Judy Hess, director of community relations at Horseshoe Southern Indiana. "Depending on who was looking at it, it had horns on its head. It was not something everybody was willing to embrace... So many of us that were this far away from legalized gambling, all we knew of it was what we saw in the movies, you know, 'Goodfellas' and all that. It was an inch-by-inch build with everybody in the county."

County officials sought community input on the prospect of bringing in the casino in the 1990s, with Hess playing a role in guiding the committees they organized. It was then that she became intrigued by the gaming industry.

The license was approved, but Hess's involvement didn't end there. She took the next step by applying for a job at what was then — and what will soon again be — Caesars. Over 20 years later, Hess has remained at Horseshoe, or what locals know as "the Boat."

In that time, Hess said the Boat has had an undeniable impact on the community.

"Certainly, the jobs that have been provided weren't here before," she said. "The number of people from the southern part of the county, I was just amazed at how many of them had jobs here — how many of them from the same family had jobs here. Nobody in the southern part of the county would have ever thought that they'd be able to get a job that good just a few miles from home."

Now, Horseshoe officials are preparing to transition from the riverboat — officially named the Glory of Rome — to their new $90 million, 110,000-square-foot land-based casino. The last day for gambling on the Glory of Rome, which is the largest riverboat in the United States and the largest gambling riverboat in the world, will be on Dec. 12, at which point gaming will move off of the river with the name reverting back to Caesars.

A special "bon voyage" party is scheduled for 7:30 p.m. Saturday, though, with Horseshoe inviting the public to enjoy one last night on the Boat. Hess will use the night as an opportunity for "one old gal to say goodbye to another old gal."

"It's been home since we opened in 1998, so it is a big change," she said. "Everything about it is just going to be better. For one thing, it will be a total update for what's current... There's just going to be so many more options right at your fingertips, and it's just so pretty."

Brad Seigel, vice president and general manager of Horseshoe Southern Indiana, said the bon voyage party will give the riverboat a proper goodbye. At the end of the night, guests will be invited on to the deck of the vessel to watch fireworks over the Ohio River.

“We’ll just have fun with it throughout the day, all the things that the Glory of Rome has been and meant to so many people," he said. "It’s to give the Boat a goodbye it deserves.”

There were multiple catalysts, Seigel said, for making the jump to land. For one, a business the size of Horseshoe wouldn't normally operate within the confines of a riverboat, regardless of size.

When Indiana lawmakers allowed for the transition to land in 2015, Seigel said it made sense to take advantage of that.

"We looked at it and thought the Glory of Rome has been good to us for 21 years," he said. "But to stay relevant and keep this business fresh and in the best position for our customers, we thought that a big change like the one we’ve made is the right move.”

The new facility will allow for a better overall experience, Seigel said. On the riverboat, it's easy to get lost within its four levels. Another factor is being able to follow the excitement.

When a player is on one level of the boat, it's impossible to know if a table is hot on any of the other three levels. That won't be an issue in the large, open-floor design of the new casino.

Convenience will also play a role, as guests will now be able to walk directly into the casino rather than making the trek from the parking garage to the riverboat.

Though the surroundings will change, Seigel said the team that has helped make Horseshoe into what it is today will still be intact. Because of that, he believes guests will embrace the change.

“There’s nostalgia, and rightfully so," Seigel said. "It’s been a place of so many good memories. [People] might be sad, but they're ready for that next big move to a place to make more memories... Ultimately, the experience in part is driven by our team. That piece of it, in a lot of respects, isn’t changing at all. The people that have provided these great experiences for 21 years will continue to provide great experiences.”