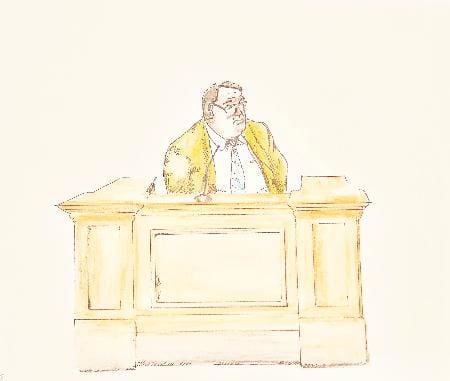 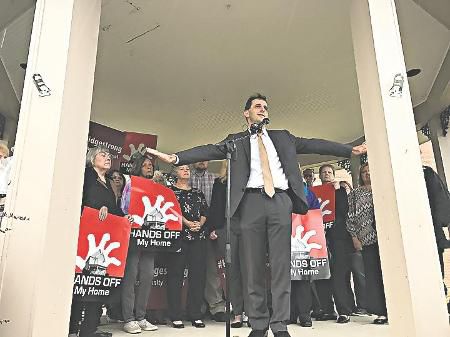 Anthony Sanders, attorney for the Institute for Justice, speaks at a rally in front of the Scott County Courthouse on Friday morning before a day-long hearing against the City of Charlestown. IJ represented homeowners of the Pleasant Ridge subdivision, who sued the city over its at-risk rental inspection ordinance that resulted in heavy fines.

Anthony Sanders, attorney for the Institute for Justice, speaks at a rally in front of the Scott County Courthouse on Friday morning before a day-long hearing against the City of Charlestown. IJ represented homeowners of the Pleasant Ridge subdivision, who sued the city over its at-risk rental inspection ordinance that resulted in heavy fines.

SCOTTSBURG — Charlestown Mayor Bob Hall testified as part of a day-long hearing in Scott County Circuit Court on Friday in defense of the city's at-risk rental inspection ordinance that has resulted in thousands of dollars of fines against property owners.

A special judge will make a decision in the coming weeks whether to order a preliminary injunction on enforcement of the ordinance at the request of the Pleasant Ridge Neighborhood Association and individual homeowners. An injunction would prevent the city from enacting its ordinance until the case is decided.

The Institute for Justice, a nonprofit law firm representing the Pleasant Ridge homeowners, argued Friday the city broke state law when it fined property owners without first giving them "reasonable time" to make repairs to return to compliance.

"We don't object to code enforcement," Anthony Sanders, IJ attorney who litigated the suit, said in his closing statement. "What these people are here for today ... [is] that the city must follow the law when it engages in code enforcement."

The city's attorneys argued that Charlestown has home rule, which states all powers of a city not expressed in law aren't to be taken away.

The lawsuit comes amid the city's efforts to redevelop the neighborhood, which may include tearing down homes to make way for a new subdivision.

On the witness stand, Hall testified his administration has worked since the early 2000s to transform Pleasant Ridge into "a safe and good neighborhood." He condemned the "rhetoric pending catastrophe" surrounding recent redevelopment efforts led by the city and carried out by a private developer, who has bought more than 150 rental homes.

"We've been taking the same approach to this in all of the redevelopment projects that we've done — is to recognize that code enforcement is necessary for safe housing and the people that are moving make sure that they have some place to go," said Hall, whose examination by his own attorneys included city initiatives to aid those who may be displaced by redevelopment.

The Institute for Justice took exception with Hall's stated objective in ensuring health and safety. Owners of Pleasant Ridge Redevelopment LLC — led by Louisville City FC chairman and president John Neace — were told if they demolished the houses they purchased then fines would be waived. Developers adopted those fines when they bought the homes from landlords, who decided to sell their properties rather than invest money to bring them up to code.

Tony Jackson, Charlestown Building Commissioner, testified that some citations were written days before they were mailed to homeowners, in some cases not reaching homeowners until the 10-day period for appeals was almost up.

Because violations started the day the citations were written, with fines accumulating every day of noncompliance, citations for a rental duplex owned by the neighborhood association showed fines in the thousands by the time they were received.

Pleasant Ridge Neighborhood Association President Josh Craven testified that the group made repairs to its duplex after it was cited, but Hall said after the hearing their fines haven't been waived — the neighborhood association just hasn't been forced to pay them. Rather, the fines continue to accumulate, Hall said.

The Institute for Justice in its witness examinations tried to emphasize the relationship between the city and Neace, quoting emails between the mayor and the developer.

In an email to Neace in January 2016, Hall wrote, "We are having landlords calling, wanting to sell their properties because they know code enforcement is coming June 1."

Hall testified that he knew code enforcement created an opportunity for developers to buy properties.

"I not only believed it, I knew that there was landlords that had come in and talked to me that said they were interested in selling their properties to Mr. Neace, that they were not going to fix [their properties] up," Hall said.

Many of these landlords signed a letter of intent to sell in 2014 for earlier efforts to redevelop the neighborhood. The city applied for $6 million in state grant money through a blight elimination program.

Craven told the court that one landlord who was a member of the neighborhood association, Jimmy Woods, initially didn't sign a letter of intent to sell. But after he was fined in 2014, Woods did sign a letter, Craven said.

Ellen Keith, a homeowner in Pleasant Ridge and plaintiff, said on the witness stand that Hall visited her house that summer, telling her "he was going to take all the properties in Pleasant Ridge." She claims he also told her they would do so by fining property owners, though she said it didn't come to mind until her deposition.

Charlestown City Attorney Mike Gillenwater maintained the city hasn't entered into any contractual agreements with developers for redeveloping Pleasant Ridge. Hall stated he still believes redeveloping the neighborhood is an "all or nothing" endeavor, meaning all homes must be demolished in order for any new ones to be built.

Since developers have boarded up vacant homes, Hall and Jackson testified animal control and crime calls to the neighborhood have decreased — though residents testified the opposite has occurred.

"Our police chief has told me many times that nearly half of all the calls of runs are in a very small part of the city in Pleasant Ridge," he said.

Over the years, houses turned from owner occupied to rental properties, changing the neighborhood's population.

"I know it's not politically correct to say, but when you have a low-rent district it invites people who are not contributing to society," Hall said.

A lengthy portion of Jackson's testimony spoke to the quality of the homes in Pleasant Ridge, built in the early 1940s to accommodate a large and quick influx of residents working at the former Indiana Army Ammunition Plant.

The building commissioner said homes were built to be temporary, with lower quality materials and constructed in a matter of days. Floors have bowed because insulation has deteriorated, hinges on piers holding up the homes have rusted and lost nails, Jackson said.

Hall told the court he owned and rented a home in Pleasant Ridge at one point but abandoned the endeavor because he said it wasn't economically feasibly to maintain.