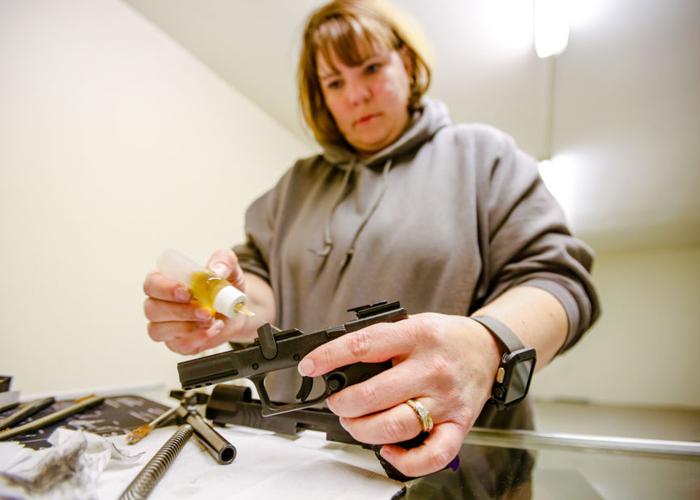 Jenny Williams applies a 2-in-1 lubricant and gun cleaning oil to her Springfield XDM at ESR Tactical gun shop in Jeffersonville in this file photo. Williams is the president of a women's gun club called the "Liberty Belles," and they meet at the shop once a month for educational purposes. 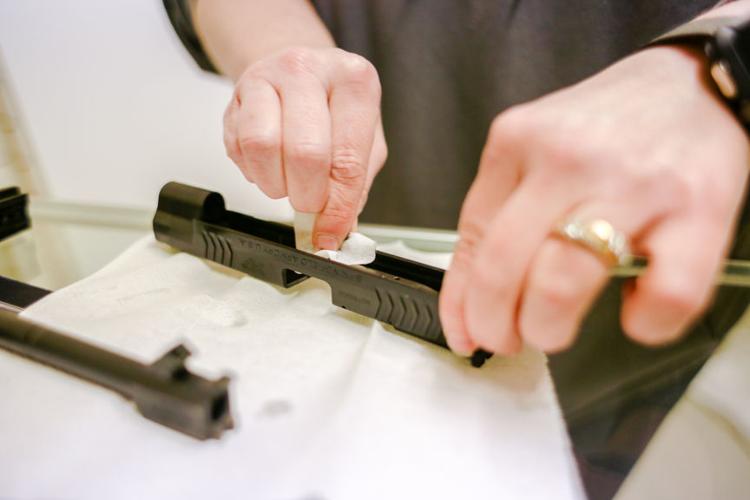 Jenny Williams wipes down with oil the slide of her handgun, ensuring a smooth shot. 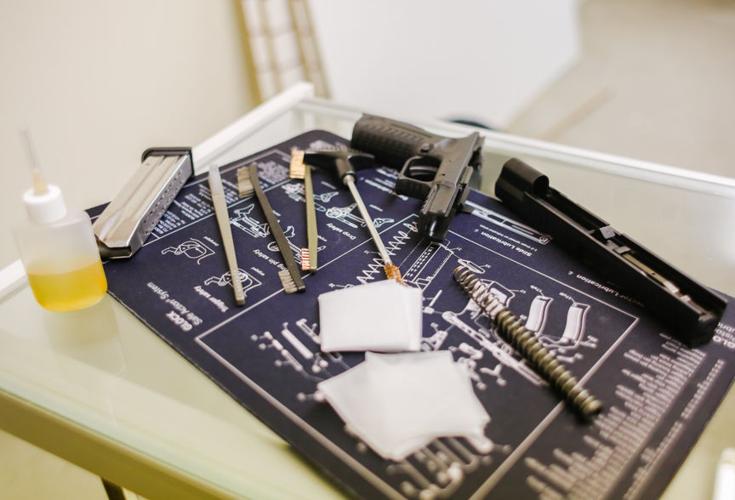 Splayed out are the parts of a Springfield XDM, a handgun owned by Jenny Williams.

Jenny Williams applies a 2-in-1 lubricant and gun cleaning oil to her Springfield XDM at ESR Tactical gun shop in Jeffersonville in this file photo. Williams is the president of a women's gun club called the "Liberty Belles," and they meet at the shop once a month for educational purposes.

Jenny Williams wipes down with oil the slide of her handgun, ensuring a smooth shot.

Splayed out are the parts of a Springfield XDM, a handgun owned by Jenny Williams.

SOUTHERN INDIANA — Sellersburg resident Jenny Williams has carried a handgun just about every day for the past three years. To legally do so in Indiana, she underwent fingerprinting and a background check, paid state and local fees and waited for her newly minted carry permit to arrive in the mail.

The process took a couple of weeks, and Williams said she had to take off work to go to the sheriff’s department to apply. On top of what she called “slightly inconvenient,” Williams thought the process was redundant. She already underwent a background check when she purchased her gun.

“So it was intrusive in that way and just the fact that that was pretty much what was standing between me and a constitutional right for it to have to be processed,” Williams, 38, said.

Indiana Rep. Jim Lucas, R-Seymour, wants to eliminate what he and Williams say are obstacles between law-abiding Hoosiers and their Second Amendment rights. That’s why Lucas is planning to introduce a bill in the coming weeks that would get rid of the mandatory permit to carry a handgun in Indiana.

Lucas introduced such a bill last year, but it was never given a hearing after entering the House Committee on Public Policy. The committee has a new chairman — Rep. Ben Smaltz, R-Auburn — who Lucas said is “very pro-gun rights and gun friendly.”

“There’s a lot of things I think that really improve the outlook of this getting a hearing this year,” Lucas said. “One is obviously the new chairman, two we’re coming off an election cycle with President-Elect [Donald] Trump coming in. We’re seeing record numbers of gun purchases, not just in the state but throughout the nation. Indiana is seeing a record number of applications for licenses to carrying handguns with the largest segment of those being women.

As of October 2016, Indiana had 753,974 active firearms permits, according to the most recently published data from the Indiana State Police. That number is up from 474,790 active permits recorded at the end of 2012. More than 15,000 of the state’s firearms permits are out of Clark County and just over 9,750 are from Floyd County.

Lucas said his proposed bill could lessen the burden and open the door for even more people to lawfully carry handguns. But the biggest misconception, he said, is that his bill would allow “just anybody to go out and get a gun.” Lucas notes that the state would still require background checks to purchase a gun.

“This [bill] does nothing for the purchasing part of it. This is just carry only, and right now if you are prohibited from getting a license to carry a handgun — like a convicted felon, domestic batterer — you’re not going to get it. And that’s not going to change,” Lucas said.

Lucas added that Indiana is a “shall issue” state, meaning that as long as a person is not prohibited from carrying a gun, a permit will be approved. Of the 29,248 who applied for a firearms permit in the first three quarters of 2016, 2,044 of them were denied, according to the Indiana State Police.

Debbie Shuman Polston, 59, New Albany, is one of the thousands of Floyd County residents with a firearms permit. She decided to get a gun in the early 90s when she was cleaning doctors’ offices at night. Polston and her husband eventually decided to get lifetime carry permits, which now cost around $125, plus other application fees.

The couple waited a week or so to get their permits, and Polston said the process was “nothing to complain” about. Now she carries her gun in her purse at all times.

“And I’m very gun-safety conscious. My purse is always with me or it’s in the trunk of my car because I don’t want to ever let that get into the hands of a child or anything like that,” Polston said. “It really makes me feel more secure.”

As for Lucas’ proposed bill on nixing mandatory carry permits?

Requiring a permit to carry keeps people honest, Polston said. The requirement alone might keep somebody who shouldn’t carry a gun from carrying one, she added. But Polston admits that she’s not sure how much the law matters to people who plan on breaking the law anyway.

According to data from the Clark County prosecutor, the office filed 64 charges of carrying a handgun without a license in 2016. In the majority of those cases, the charge was one of two or more charges. Numbers for Clarksville Town Court and Floyd County courts were not available by press time.

Lucas said he’s heard talk about carry permits being a valuable tool for law enforcement. If an officer knows a person is a permit holder, it could tip them off to a possible gun. But Noel said officers would check for weapons anyway, if the situation warrants such a check.

TOO MUCH OF A ROADBLOCK?

The bill would leave at least one hole for law enforcement. Lucas said the fees collected for permits add up to $5 million a year that goes toward law enforcement training. Losing that source of money has been Lucas’ primary concern, but he said training police shouldn’t be funded through the “licensing of a constitutional right.”

“I want our officers to be safe and have the proper training, and adequate training,” Lucas said. “And this is a budget year, so $5 million is a drop in the bucket on a $16 billion budget yearly. And there are many other sources that we can look at to recover not just that money, maybe even a little bit more for them.”

The Indiana General Assembly’s 2017 session kicks off today, and Lucas has until next week to file the proposed bill. He said he’s working on other legislation too, including a bill that would provide up to a $200 state income tax credit for anybody who completes a firearms safety course. He’d also like to address eliminating gun-free zones.

In the meantime, Williams — who leads the Liberty Belles Women’s Gun Club in Clark County — said the current permit requirements can be too much of a roadblock. While she didn’t mind waiting a couple of weeks to get her permit, Williams said the need can be much more dire for others.

“I have someone that I just became friends with, and quite honestly for her, it could be a life or death situation. The reason that she’s purchased a handgun was to personally protect herself because she has an issue with a stalker, and it was recommended to her by the police department to purchase a firearm,” Williams said.