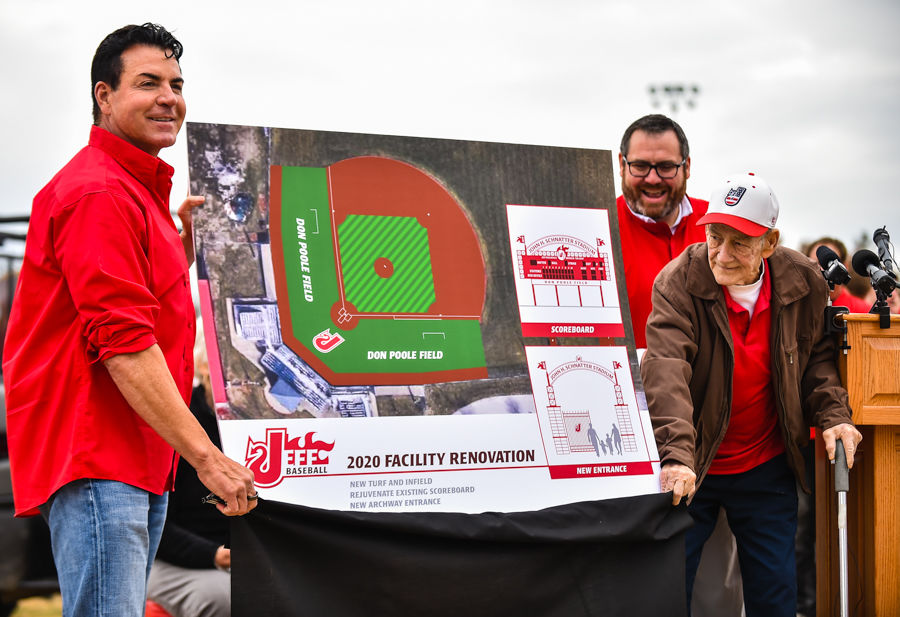 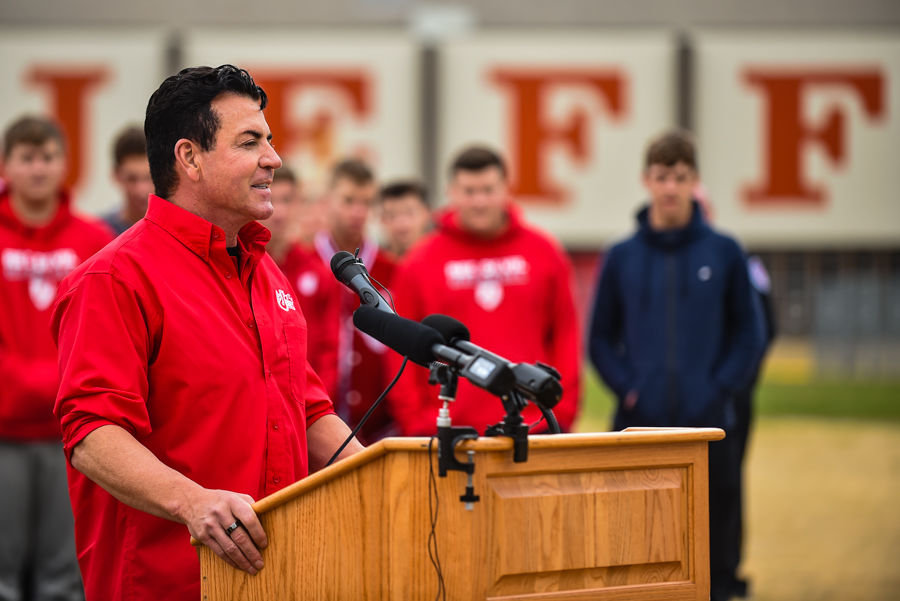 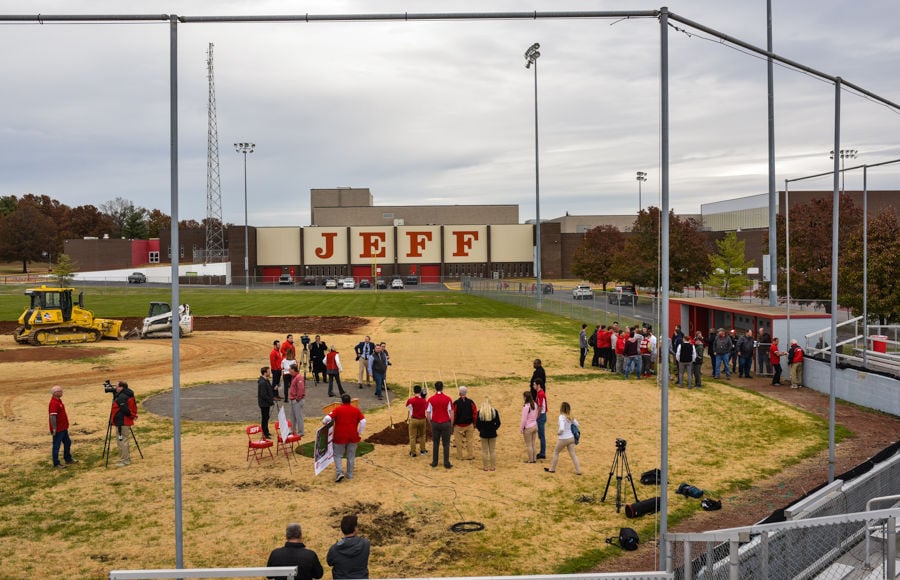 As part of the new John H. Schnatter Stadium, Don Poole Field will receive a new infield, a scoreboard renovation and a new entryway to welcome fans. 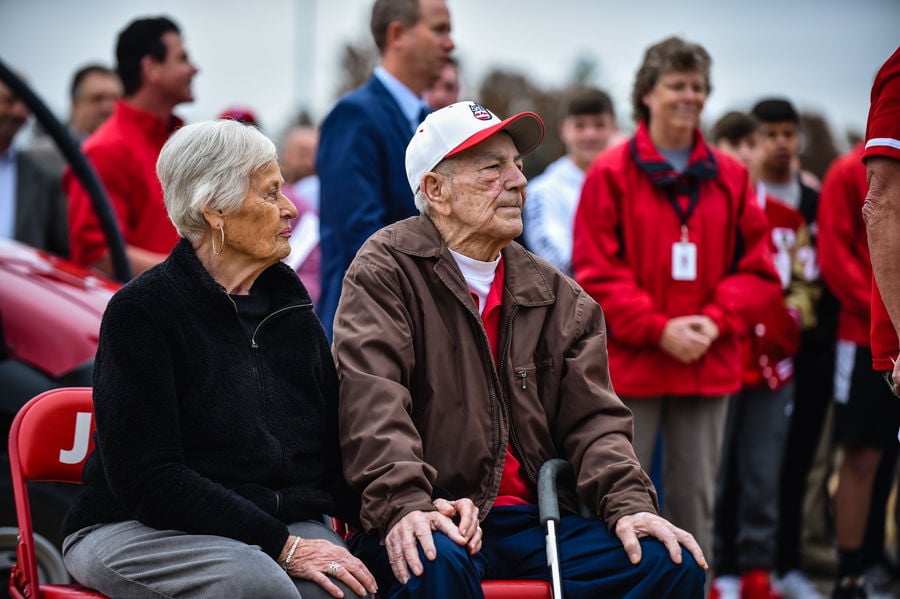 Don Poole and wife, Dorothy, react as he is recognized for his successful career as head coach for 17 years at Jeffersonville High School. 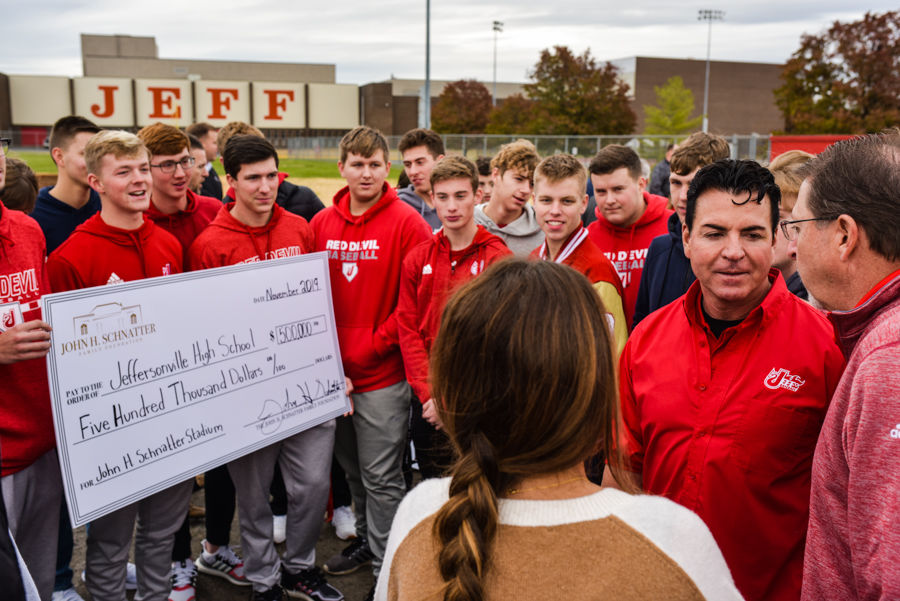 John Schnatter talks with Coach Derrick Ellis as members of the Jeffersonville baseball team hold a donation of $500,000 to be put toward the school's new baseball stadium.

As part of the new John H. Schnatter Stadium, Don Poole Field will receive a new infield, a scoreboard renovation and a new entryway to welcome fans.

Don Poole and wife, Dorothy, react as he is recognized for his successful career as head coach for 17 years at Jeffersonville High School.

John Schnatter talks with Coach Derrick Ellis as members of the Jeffersonville baseball team hold a donation of $500,000 to be put toward the school's new baseball stadium.

JEFFERSONVILLE — Dozens of current and former Jeffersonville Red Devil baseball players gathered at Don Poole Field on Thursday to mark the beginning of the facility's transformation.

In October, Greater Clark County Schools voted unanimously to accept a $500,000 donation from the foundation of John Schnatter, founder of Papa John's. That money will help update the school's baseball field — bringing artificial turf, a new scoreboard and an ornate entrance gate welcoming spectators to the grounds.

Alumni and school officials met on the field Thursday morning to hear from Schnatter, see the renderings of the new plans and take steps toward making them come to fruition by breaking ground.

"This is a field of dreams," Schnatter said during his speech at the event. "This belongs to tomorrow's entrepreneurs, today's players and to our future leaders. A farmer is just a farmer without good equipment. But a farmer with good tools is a growing entity, and an entity with dreams."

Upon completion, the entire complex will be named John H. Schnatter Stadium. For years, the field has borne the name of the legendary Don Poole, who coached the Red Devils from 1972 to 1989 and was inducted into the Indiana Baseball Hall of Fame in 1990.

Though the stadium as a whole will now also have Schnatter's name attached, the field itself will still be emblazoned with Poole's, perhaps even more prominently than before. Poole was one of the several in attendance at the groundbreaking, taking time to recognize his former player Schnatter.

"It's unbelievable that something like this could happen," Poole said. "I don't think there's anything in Southern Indiana on a baseball field like we're going to have here. For John to do this as a former player and alum, it's just out of sight. It's not something I ever thought could be, but it is."

Derek Ellis, who's in his eighth year as head baseball coach at the school, said the new field is going to inject energy into the program. It will also allow better player development, he said, as the team will have more time to be on the field throughout the year.

Delays from rain that could otherwise cost a day on a traditional field can now be avoided with the turf, Ellis added.

"It's like Christmas in November," he said. "This is phenomenal. We can't thank John enough for his generosity. The kids are pumped we're going to be playing on one of the best fields in Southern Indiana. We're excited about it."

According to athletic director Todd Satterly, the renovations will be done in time for the season. He expects the turf to be finished by Feb. 1, which will leave time for early spring workouts.

The scoreboard graphics and new entryway will be the last two pieces in place by opening day.

While Schnatter's donation was appreciated, Satterly said it was important that Poole still be recognized as the field undergoes a rebirth.

"There' s been story after story I've heard about Coach Poole," Satterly said. "I think that there will be no doubt that his legacy will live. It's very important for these former players that played for Coach Poole that new players keep having those values instilled in them."

Last year, Schnatter found himself in hot water after using a racial slur on a conference call, while also making allusions to past racial violence directed at African Americans in Southern Indiana. Those comments cost him his position as chairman of the company's board. He previously stepped down as the company's chief executive officer in the aftermath of a controversy regarding his comments about NFL players choosing to kneel during the National Anthem.

On a local level, Schnatter's name and likeness was removed from a number of public places, including Papa John's Cardinal Stadium and Jeffersonville's Wall of Champions at the Big Four Bridge.

The $500,000 donation to Jeffersonville comes on the heels of a $1 million gift to Simmons College, a historically black college in Kentucky, earlier this year.